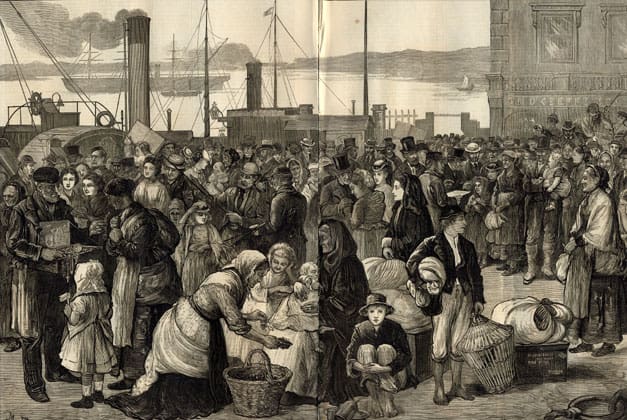 Mass Irish emigration over the past few centuries started the Irish Heritage around the world and has caused many place names worldwide to be renamed after Irish towns and cities.

Bangor is the name of 28 towns around the world, including Bangor, County Down. Some of these, such as Bangor, Maine are named after either Bangor in Wales or Bangor in Northern Ireland.

These people and their descendants then named their new-found-land after Irish place names and that is why today there are so many around the world, predominantly in the US where over 36 million people claim Irish as their primary ethnicity.

A Tale of Two Cities

The two biggest cities in Northern Ireland are Belfast, County Antrim and Derry, County Londonderry. Belfast was granted city status by Queen Victoria in 1888. Despite being viewed as one of the most dangerous cities to live in the world during the 70s and 80s, it is now regarded as one of the safest cities within the United Kingdom according to a survey conducted in 2016.

The city of Derry gained city status in 1604 with a Royal Charter from the Kingdom of Ireland. Derry (Londonderry) is thriving as a city nowadays and is now one of the most popular places for tourists of Northern Ireland to visit.

Both of these cities have strong Irish Heritage ties across the North Atlantic Ocean. Belfast, Maine is a city in Waldo County, Maine, USA. Around 7,000 people live there and it is popular with tourists due to its antique architecture and historic districts.

Belfast, Maine was settled by Scottish and Irish families from Londonderry, New Hampshire in the Spring of 1770. It is often rumoured that the name Belfast, after the Northern Irish city, was decided via a coin-toss.

During the American Revolution, fear of British attack led the original residents to abandon Belfast. However, they returned in the 1780s to build a vibrant, prosperous city that would become the main market centre for the surrounding areas.

Two catastrophic fires consumed most of the downtown area in 1865 and 1873 respectively. Merchants rebuilt the city with brick, which created a long-lasting commercial district.

In the 1900s the city’s prosperity was mainly focused on shipbuilding and commerce, similar to the original Belfast during this time as it built the Titanic. Today, Belfast, Maine is a quiet, small town with an appealing Irish Heritage, culture and community spirit that is attractive to both tourists and potential residents.

What Did the Natives Think of the Irish Settlers?

When Britain renounced Catholicism they tried to implement Protestantism upon Ireland and the people of Ireland refused it, which sparked wide hatred towards Irish people from the rest of Britain.

Racism towards Irish people can be traced as far back as the year 1190 with the Norman chronicler Giraldus Cambrensis. To justify the Norman invasion of Ireland, he wrote disparagingly of the country in his aim to seek promotion by Henry II within the English church.

Stereotyping of the Irish continued into more modern times such as the 19th century. Victorian Britain branded the Irish as violent and alcoholic.

Irish emigration to Boston originally began in the colonial period with the arrival of predominantly Protestant migrants from Ulster, who came seeking relief from high rents, repressive taxes, and other pressures.

They were followed by many Catholic Irish settlers shortly after. Wary of Boston’s Anglo-Saxon Puritans, who were hostile to the Irish, many moved to the outskirts of the Bay Colony and founded towns such as Bangor and Belfast in Maine.

The roots of Irish Heritage are rooted deep in people all around the world. Since there are more than 80 million people of Irish descent worldwide, many cultures, accents and traditions are influenced by historical Irish traditions. Irish diaspora is one of the largest of any other nation despite the population of the island of Ireland, being just over 6 million.

Did you know the popularity of the Irish Heritage? Are you of Irish descent but are from a different country? Let us know in the comments below.