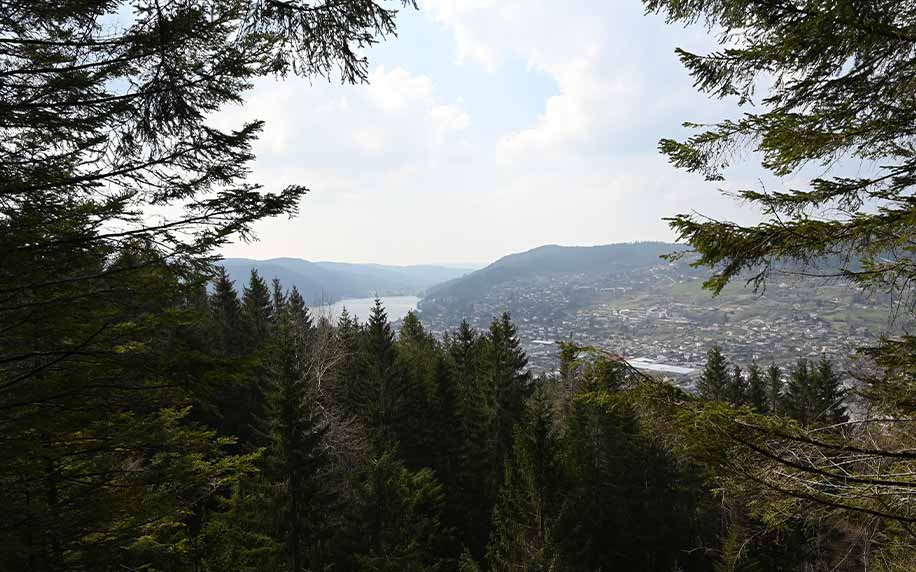 Gérardmer’s Lake is considered the jewel of the Vosges massif. The largest lake of the Vosges, it has an incredible length of 2.2 kilometres and a width of 750 metres. Its maximum depth is 38 metre making it a great place to dive.

Gérardmer’s Lake and Xonrupt Longemer’s Lake were formed over 80,000 years ago by one of the glaciers of the Hohneck massif, during the Würm glaciation. They now reside in the remnant of these formidable glacier shifts.

A waterfall known as Le Saut de la Bourrique, or the Waterfall of the Donkey Jump, is located on the south side of Gérardmer’s Lake. Particularly pleasant, it is popular amongst locals who enjoy visiting there. It is considered one of the most impressive in the area as it has a waterfall of ten metres. One of the incredible offerings of the Vosges Lakes.

According to a legend, a local Lord owned a very loyal donkey. On his return from the Crusades, he passed by the waterfall where he was ambushed by bandits. The donkey, who heard the return of his master, came to meet him.

Built in 1760, this mountain farm rents one of its buildings to the municipality of Gérardmer. The goal was to enable the children of the town to receive a solid education, outside of their demanding roles helping on family farms.

In his personal notebook, a teacher says that one of the main difficulties was to make students understand the French language. Indeed, at the age of eight or nine, when children start school, they do not understand traditional French because their parents conversed with them in local dialects.

Nowadays, the Phény school has been transformed into a holiday cottage, where people can come to stay and enjoy the surroundings of Gérardmer.

The Chapel of the Holy Trinity

This chapel was built by Dominique Viry, in 1768.  Legend has it that his two daughters felt mysterious caresses on their cheeks at night.

Intrigued, he took their place during one night and also felt these caresses. Frightened, he grabbed the hand and was thrown out of bed into the air.

Praying to get out alive, he promised the Holy Trinity to build a chapel where he would be safe. This building is both a dwelling and a chapel.

Nowadays, the dwelling part is vacant because it no longer meets safety standards. The triangular bell tower reminds us that the chapel is dedicated to the Holy Trinity.

Our Little Tip for Visiting Gérardmer

Go to the fitness trail in Gérardmer, take a random path and let yourself be besotted by the beauty of the Vosges forests. Not only are you getting an incredible workout, you’re getting to indulge in the beautiful vistas that this special area has to offer those who visit it. Come to Gérardmer to see rural France.

The 3 Top Hotels in Luxor, Egypt

Top Things to Do in Dubai, UAE