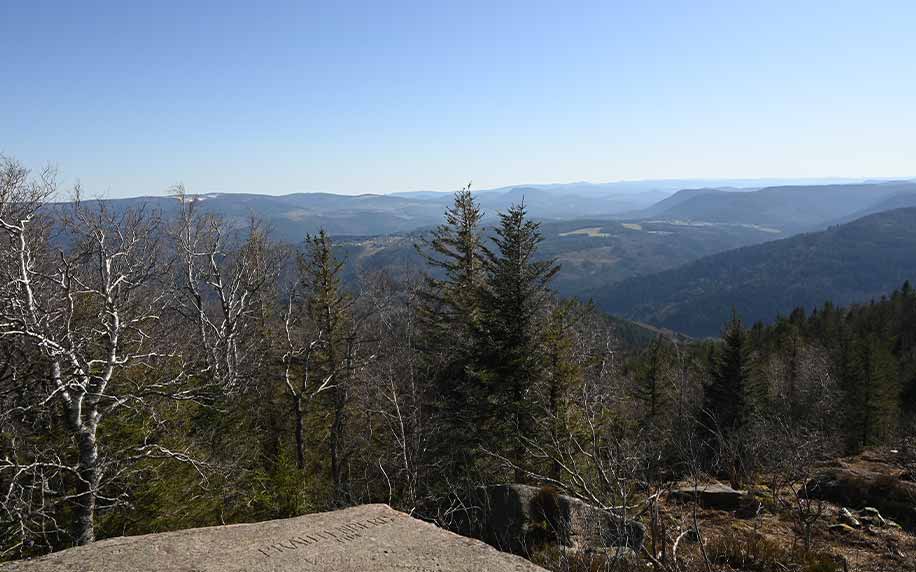 Les Vosges is located in the Northeast of France, in the Grand-Est region, more precisely in the historical and cultural region of Lorraine. Les Vosges get their name from the “Vosges massif” which occupies a large part of its territory. It is hard to not be overwhelmed by the wide and stunning views that Les Vosges has to offer.

For lovers of nature and adventure, great sportsmen or hikers, this place is perfect for you! Put on your warmest jacket and find out more about the impressive Les Vosges Mountains and some of the amazing alternative holidays France has to offer.

It is considered one of the largest nature reserves in France, thanks to its 3.000km square. This nature reserve holds 14 summits, including the higher, Le Grand Ballon d’Alsace which rises to 1.424 metres above sea level.

Totally immersed in the middle of heavily wooded slopes, peatlands, lakes and rivers, oak, beech and fir forests. The fauna and flora are abundant and emblematic of the Vosges massif. There are Lynx, Peregrine Falcons, Deer, Chamois, Timber Wolves and so many medicinal plants.

Located between Le Hohneck and Les Ballons des Vosges, Le Markstein is a resort for winter sports, summer and relaxation.

Le Markstein Alpine Ski Area includes 13 pistes with 8 ski lifts. The resort also has a slalom stadium, which hosts International Ski Federation races every year. In addition, Le Markstein offers the possibility to enjoy a huge Nordic area, with 40 kilometres of marked trails, including a Nordic park in the heart of the resort. Finally, six snowshoe tours allow people to admire the unique panoramas of the valley.

Located between 1040 and 1265 meters above sea level, Le Markstein area is classified as Natura 2000, a network that brings together natural or semi-natural sites of the European Union having a high heritage value through rich flora and fauna.

In summer, the site is very famous for its “Summer Sledge” or its amazing cycling route.

Indeed, Le Markstein hosted the 9th stage of Le Tour de France 2014, with a climb by the slope classified in the 1st category. Tony Martin was ahead.

Le Hohneck, the third summit of the Vosges massif, with 1,363 metres of altitude, dominates the ridgeline that separates Alsace from Lorraine. It is the highest point of the Vosges department. From its summit, you can overlook the plains of Alsace with “La Forêt Noire” and even make out the Alps in clear weather.

In summer, people climb until the summit of the Hohneck by the famous “Route des Crêtes”, a road very popular by bikers, to admire Chamois during the sunset and the stunning landscape the place offers. When we look down, we can admire the Schiessrothried lake, located on the Alsatian side.

Le Hohneck climate is mountainous. Temperatures can be very harsh, up to minus 30 degrees in winter.

With an altitude of more than 1,200 metres, it is located on the subalpine floor. You easily make out this floor, with the absence of vegetation due to high winds and low temperatures, where fir and beech wood no longer develop and give way to alpine plant species and stubbles, equivalent to alpine pastures in the Alps.

On the 417 regional road, between Xonrupt City and La Schlucht pass, you can find a little tunnel dig in pink sandstone, named “la Roche du Diable” or “The Devil’s Rock”.

Strange name for a tunnel, isn’t it?

Right next to this short tunnel, there is a belvedere where people can enjoy the view on Xonrupt Lake and Retournemer Lake, two lakes near Gérardmer City.

In a formal way, this tunnel would have been dug by Napoleon III. However, the legend tells that the devil would have appropriated the rock.

He would have triggered a terrible storm and lightning would have hit the summit of the mountain, which would have caused the rock to fall into the depth of the lake.

The mermaids, people of the lake, not let themselves be pushed around, take the rock out of the water. The devil took advantage of it to grab the rock that came out and settle there. Accompanied by its evil animals, the Devil leads a hard life to the peoples of the woods. The latter stand up to the Devil. Thanks to their power, peoples of the woods bring nature to life at the foot of the Rock. Weary, the Devil abandoned it and never came back.

At more than 1.000 metres above sea level, lies the Donon mountain and its wonderful temple. It is considered as the highest point of Les Basses-Vosges.

Le Donon, offering an exceptional viewpoint, was used as a refuge from the 3rd millennium BC. It has been occupied since the Neolithic period, about 3.000 BC, and takes its name from “Dun”, a Gaulish name meaning “Mountain”, or from “Dunos”, which means “Fortified Wall”.

The Celts built a sanctuary dedicated to the God Teutates, father of Gaul people. The magic of this place then held the Gauls’ attention who honoured their God Cerf Cernunnos. Later the Romans put several buildings up dedicated to some Greco-Roman Deities as Mercury and Jupiter. The site quickly became a sacred place that made it a high place of worship and caused the appearance of many legends.

The place had been chosen with care by the Romans. At the foot of the Donon, an important trade route was opened, every year a large market was organized.

The temple of Mercury, at the top of the Donon, is a replica built by Napoleon III and was initially built to serve as a museum. This temple with twelve pillars, open on its 4 sides, dates from 1869. Many names and symbols are engraved in the surrounding rock slabs.

Get up early in the morning, when the sun hasn’t come up.

Dress Warmly, take a snack in your backpack, go to the summit of Le Hohneck and watch the sunrise.

This will be an experience you never forget.

Natural Wonders of the World