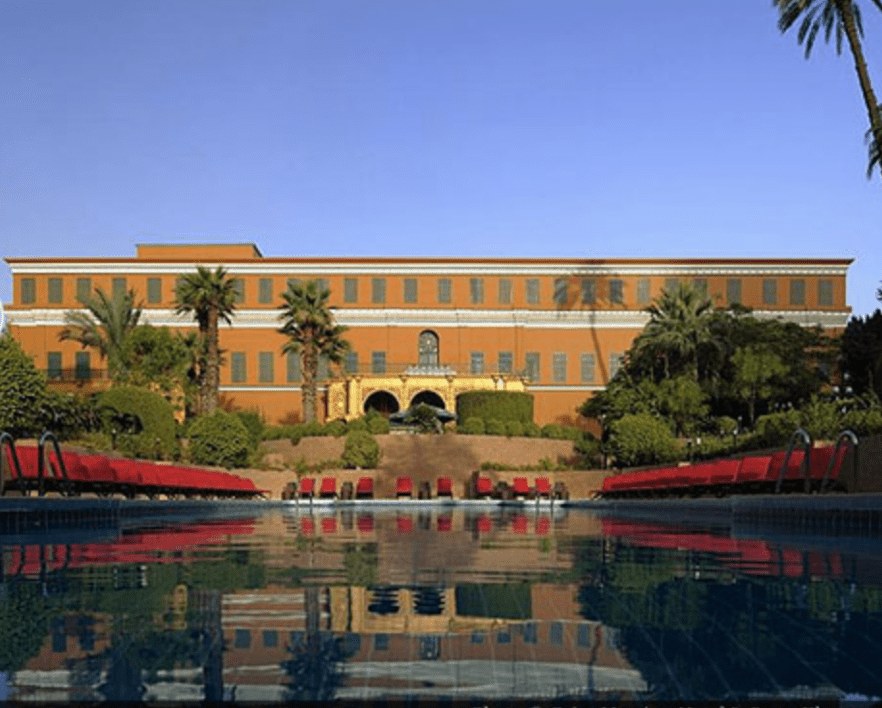 Egypt contains some of the most beautiful buildings in the world, and one of these buildings is in Cairo. Al Gezira Palace located in the Zamalek district; is now a famous hotel. It all started when Khedive Ismail decided to build a palace to welcome the special guests he had invited to attend the celebrations of the opening of the Suez Canal. One of these important guests was Empress Eugenie, the wife of Emperor Napoleon III whom Khedive Ismail chose to be the guest of honor of the celebration as he granted her the honor of announcing the inauguration of the event.

The Construction of Al Gezira Palace:

It all started in 1863 when Khedive Ismail gave the order to the German architect Julius Franz to built the palace and he cooperated with the famous architect de Corel del Russo, who had designed Abdeen Palace, and it took 5 years to construct until it was finished in 1868. The visit of Empress Eugenie made Khedive Ismail give the order to decorate the palace in the same style as that of the residence of Eugenie in the Tuyuri Palace merged with elements of the Islamic style through the use of designs made of marble, in addition to windows and balconies made in the Mashrabiya style. Al Gezira Palace contained furniture, carpets, antiques, chandeliers, statues, mirrors, decorations, and accessories from the largest European capitals, such as Paris and Berlin.

The construction of the palace cost about 750 thousand pounds, and it was built facing the neighborhood of Bulaq. This was one of the reasons to construct the Qasr al-Nil Bridge, which connects the center of Cairo to the island of Zamalek and it was opened in 1872. They also had to protect the area surrounding the palace from the risks of flooding and he paved the road leading to the pyramids and built several bridges like Abu Al-Ela Bridge to enable the delegations participating in the celebration of the opening of the Suez Canal to move to the pyramids from Al Gezira Palace.

Besides building the palace, there was also the planning of the landscape surrounding the palace by the French architect Barré Deschamps, who converted the island into a forest with the rarest plants, trees and a zoo for the entertainment of the guests.

For this lovely occasion, the Italian international composer Verdi was chosen to compose music for the opening of the Suez Canal, so Verdi composed the music of the Aida opera especially for this day, and this music was played for the first time in the garden of Al Gezira Palace.

Over the years, some parts of the palace have been restored, like the fountain, the staircase, the expensive marble, six ancient wall clocks, and various paintings, including a drawing of Empress Eugenie and a marble table dating back to the reign of King Louis XIV.

Another beautiful design that Khedive Ismail did in Al Gezira Palace, was the two bedrooms for Empress Eugenie with a French character quite similar to her room in the Tuileries Palace in France and the other room was in Islamic style. In this Islamic room, there are verses of poetry on the walls, welcoming her arrival.

The hall of the lavish palace contained two paintings, one of which depicts the dinner gala attended by Empress Eugenie during the legendary celebrations held by Khedive Ismail on the occasion of the opening of the Suez Canal and the other painting was about the celebration that was held in Port Said and Ismailia on the same occasion.

There is a lovely royal salon that shows the agricultural riches of Egypt and all its inscriptions depict Egypt’s crops at the time in addition to the rare marble statues that adorn the palace garden, which was specially made in Italy for Khedive Ismail.

This magnificent palace was built for Empress Eugenie, who was a Spanish girl from the province of Granada who decided not to accept her life as a middle-class child. Instead, she learned English and French and moved to France. She was an intelligent girl and became empress of France after Emperor Napoleon III fell in love with her due to her intelligence and charming beauty.

Some stories say that she fell in love with Khedive Ismail at first sight but of course, it was a forbidden love story and therefore, to show his love for her, he built this palace in her honor. He made her bedroom out of pure gold, and her bed is topped with a red ruby. ​Inscribed around it in French the phrase: ‘My eyes at least will admire you forever’. When the war between Russia and France broke out, she came to Egypt to visit the tomb of Khedive Ismail, and that perhaps showed how much she did love him.

What Happened to Al Gezira Palace after Khedive Ismail?

When Khedive Ismail was ousted from the throne of Egypt in the year 1879, the palace was sold to the Egyptian Hotel Company to pay part of Khedive Ismail’s debts and it became a hotel called the Gezira Palace Hotel. After which, the palace’s garden was divided into many sections, such as the Khedive Garden, which became the Gezira Club Al-Riyadi that included the horse race track and the polo field. There is also the Khedivial Fish Park on the western side of the palace, which was converted into a separate huge aquarium and it was opened in 1902.

When World War II began, tourism around the world hit a roadblock and that made the company that owned the hotel sell it in 1919 to a wealthy Lebanese, Prince Habib Lotfullah, who turned it into a private residence for him and his family. In the 1960s, the palace was nationalized alongside many facilities that were nationalized In Egypt at the time. It was transformed again into a hotel called Omar Khayyam Hotel. After that, Marriott International took over the hotel management and its name changed to Marriott Hotel.

When the Marriot took over the palace, a huge refurbishment took place, and it was restored and repaired, as well as the 25000 meters squared gardens surrounding it. The hotel now consists of 20 floors comprising a large number of guest rooms, amounting to 1250 luxurious rooms and suites, and beside the main palace. There are restaurants, meeting rooms, ballrooms and also a swimming pool and after all the restoration it was opened in 1982. The hotel is located now near famous landmarks and attractions of the city of Cairo, such as the Cairo Tower, the New Egyptian Opera House, the Andalus Park, the Aquarium, the Gezira Sports Club, the National Sports Club, the Islamic Ceramics Museum, the Sawy Wheel and also near from the Tahrir Square in downtown Cairo and the heart of Cairo’s Khedive City.