Your Guide to Braga, Portugal: The Beauty of Europe 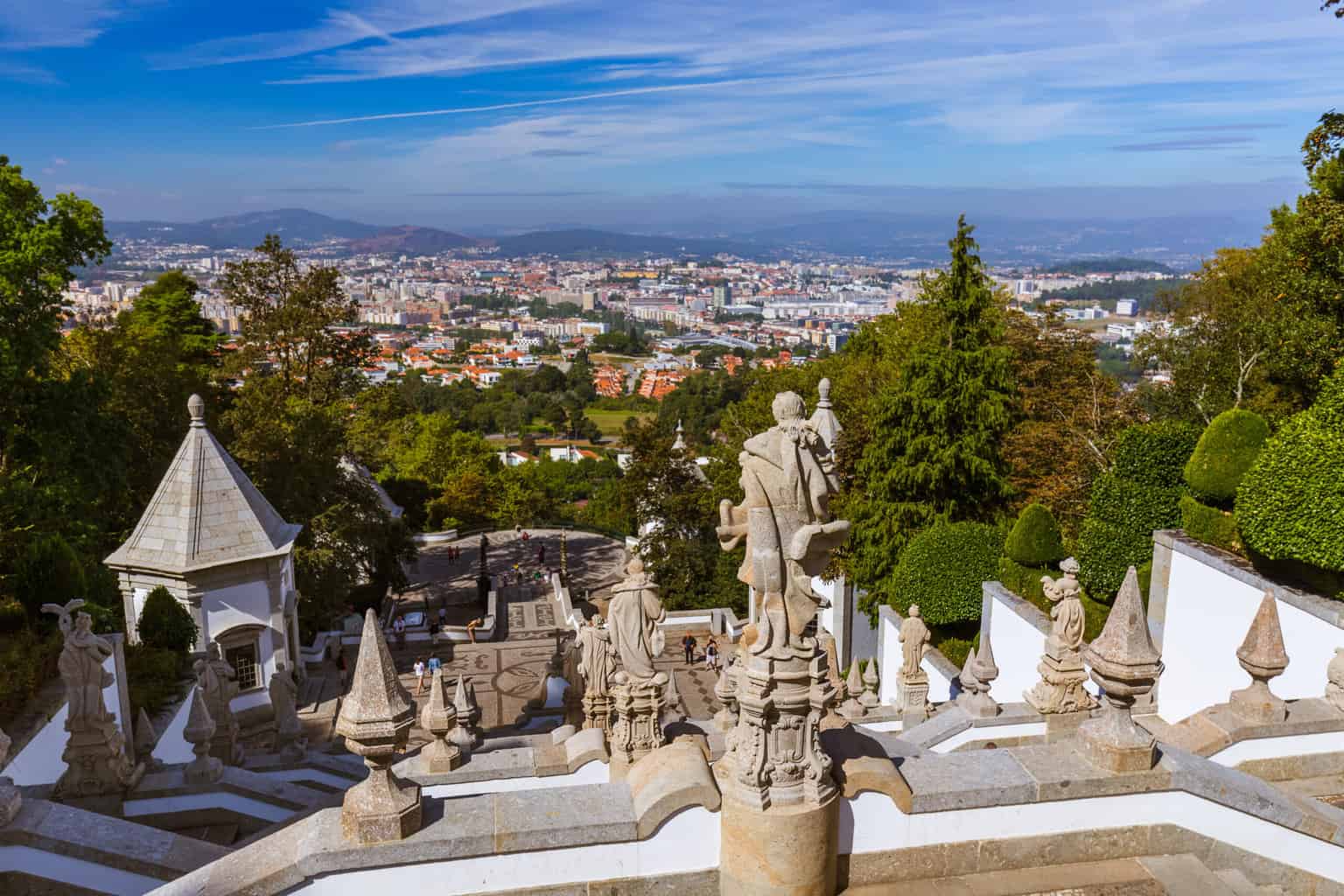 Every trip to northern Portugal would not be complete without a visit to the beautiful city of Braga, one of the most important Portuguese cities in the Cavado Valley in the Minho region in northern Portugal. It was founded 2000 years ago by the Roman Emperor Augustus. It is the third-largest city in the country and has a rich history, incredible architecture, and various entertainment opportunities.

Braga has enjoyed great prosperity and development in various aspects and sectors in recent years. It is often likened to the Italian city of Rome, thanks to its rich heritage, diverse traditions, and stunning landscapes.

It is also a holy city because it contains many religious shrines, among which are the most beautiful churches in Portugal, making it one of the most important tourist attractions for Christians worldwide.

The city of Braga is one of the oldest in Portugal. It witnessed the presence of many ancient civilisations, such as the Roman and Celtic civilisations. The city’s land also represented a meeting point for five strategic military roads.

In the 5th century, Braga came under the control of the Suebi, then the Visigoths controlled it in 585, followed by the Moors in 716 until Emperor Ferdinand I entered it in 1040. During the period between 1093 and 1147, it was the seat of the Portuguese court. The importance of Braga continued during the Middle Ages with the presence of the Bishop of Braga, who competed with the Bishop of Toledo for power.

The region has a private airport, Sa Carneiro International Airport, located 50 km from Porto. The city also includes public transportation, represented by the regional railway lines, which operate efficiently and at high speed.

Braga has a solid and vital economic sector. The competent authorities in the city have sought to advance and develop the economy through several strategies, such as attracting investment and internationalisation, promoting financial stability, and promoting innovation.

It includes many sectors and industries that have significantly impacted the economy’s growth, including information technology, communications and electronics, automotive sectors, software production, engineering, and much more.

The Best Time to Visit Braga

The best time to visit Braga is in the spring, from March to May. That is where the city is blooming and in a state of activity after the more dormant winter season.

You can also visit it in the fall, between September and October, when the sun is still shining, the weather is warm, and the crowds of summer travellers can be avoided.

Braga is a beautiful tourist destination for many visitors from all over the world. It is a lovely city with many picturesque landscapes, famous squares, ancient narrow lanes, and wonderful Baroque churches.

The city offers its visitors a variety of tourism activities, including religious tourism, cultural tourism, commercial tourism, and many other types of tourism that cater to different tastes. Visitors to Braga can visit parks like Santa Barbara Park, characterised by its stunning scenery and colourful flowers, overlooking the former bishop’s palace.

They can also explore the chapels and churches scattered in many areas of Braga or the museums that contain extensive collections of beautiful artefacts, and then try the delicious food and drinks at the city’s famous restaurants.

Republic Square, also known as Arcada Square, is in the middle of the old city. The large square was established in the 19th century and is surrounded by high residential buildings.

It is an essential attraction in the city, as it contains most of the tourist offices and companies that provide excellent tours. The square also has many distinctive cafes and restaurants.

It comes alive every day from mid-morning to late evening, when it is filled with locals who come to enjoy eating in the cafes and restaurants that line the square and have a great time. That includes Café Vianna and Café Astória, which have been serving customers for about 150 years.

Braga Cathedral is a historical cathedral. Work began on its construction in the year 1070, making it the oldest in Portugal, and it is distinguished by a mix of architectural styles.

Braga Cathedral dominates the downtown area, and you’ll even walk past its different facades a few times as you explore the Old Town. The building has been modified several times, furnished with Romanesque, Gothic, Manueline, Renaissance, and Baroque elements and decorations.

The Roman triple nave is still easily recognisable, but what will immediately distract you are the two Baroque organs from 1737 and 1739, with cases covered in gilt wood. While there, you can trace the baptismal font, which features a Manueline design, and the stunning 15th-century recumbent tombstone of King John I’s son, Afonso.

The Museum of Sacred Art is housed in the cathedral sacristy and is dotted with a rich collection of religious artwork and other ecclesiastical treasures. You will find many treasures in the museum, such as ancient statues, schematic sculptures, and beautiful 17th azulejo tiles among the permanent exhibits.

An exit on the north side of the nave accesses the museum. It leads into the cloister, and from here, a flight of steps leads to the treasury.

Sanctuary of Bom Jesus do Monte

The Sanctuary of Bom Jesus do Monte is a pilgrimage site built in the 18th century, featuring a massive Baroque staircase that climbs 116 metres up to the impressive church. It is located in Tenões, outside the city of Braga. It is considered a unique religious sanctuary in Portugal, as a green garden descends from it, connecting the entrance to the church. It is also can be reached by a hydraulically suspended railway.

Sanctuary of Our Lady of Sameiro

The Sanctuary of Our Lady of Sameiro is located south of Bom Jesus do Monte, 566 metres above sea level. It is well-known as one of Portugal’s most frequented pilgrimage sites. But you will feel its relative tranquillity compared to its neighbour to the north.

The church dates back to the 1860s and has a Marian shrine that receives plenty of worshipers on Sundays between June 1 and August 31. But for others, it’s all about the view.

Biscainhos Museum is located on the square of the same name. It is a house museum in a resplendent patrician mansion of the 17th and 18th centuries with lavish gardens. It is a window into the lives of the Portuguese nobility.

The museum features some fine azulejos, impressive stucco mouldings, and collections of glassware, furniture, jewellery, ceramics, and musical instruments. The place is full of fountains and sculptures and was landscaped in 1750. An orchard area is arranged over a parterre and a formal garden with boxwood carvings.

Raio Palace is one of the most prominent buildings in the city of Braga. It is a beautiful example of the city’s architecture, designed in the Baroque style. In the centre of Braga, this divine palace was built in the 1750s and commissioned by João Duarte de Faria, a wealthy merchant and Knight of the Order of Christ.

Its walls are azure blue, contrasting with the graceful granite carvings on doorways and window frames. It is distinguished by its impressive wrought-iron balconies on the first floor and the carved artefacts on both sides of the gate.

Santa Barbara Park is located next to the medieval episcopal palace in Braga and is bordered by the fine northern walls of the palace. The garden is strict and uncluttered, with geometric lines and manicured boxwood hedges.

Also, you will see a riot of colourful flowers in the summer that attract many birds. If you go into the palace, you will see remains of a Gothic arcade that lined the palace courtyard, and in the stonework on the walls, you can make out fragments of carvings and coats of arms.

The bridge is 30 kilometres north of Braga and is considered one of the most popular tourist destinations. It was built in the 15th century, and it extends over the Lima River.

Many beautiful gardens and parks spread around it, offering fantastic views. The Poets’ Garden is one of the most beautiful and picturesque gardens extending over the river. It is a wonderful place for picnics. Also near the bridge, you’ll find a flea market, a daily market where fishermen make their deals.

It is about five kilometres away from the De Barca Bridge. The gate was built in the 13th century and contained many ancient treasures, including the best Romanesque sculptures in Portugal.

It is decorated with sculptures in the form of monkeys and falcons, and it contains arched columns on the main facade of the gate. There is also a sculpture of Christ surrounded by two angels, including some beautiful interior decorations and the remains of wall paintings dating back to the 14th century.

It is a pre-Romanesque chapel founded by the Visigoths in the 7th century. Some damages occurred during the Islamic period in the 9th and 10th centuries but were repaired.

Apart from that, the building has had the same Greek cross design since its construction. It was incorporated in the 18th century into a Baroque chapel, and you can access it on the right side of the nave.

Braga Tower is all that remains of the old Braga Castle, which was demolished at the beginning of the 20th century after it served as a prison. The thirty-metre-high granite tower gives an idea of the five towers that guarded the medieval walls.

The tower still bears the royal coat of arms on its northeastern facade. However, far from its original military purpose, the building is now in the care of the Association for the Protection, Study, and Promotion of Cultural Heritage.

10 Must Visit Abandoned Castles in England

Your Full Guide to Visit 20 Places in Turkey