The Fascinating Legend of Edinburgh Castle 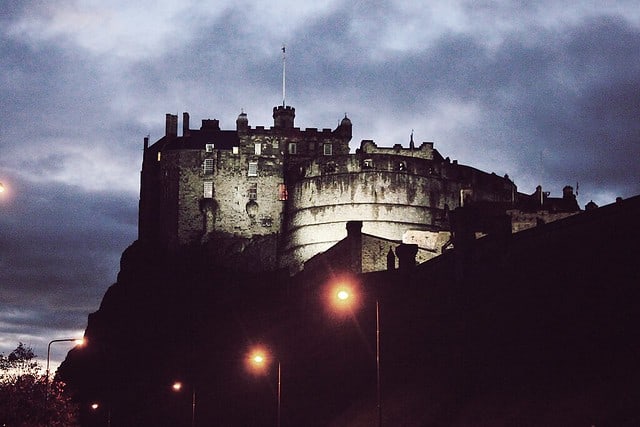 Almost every castle in Scotland comes with its own history and legends to uncover. Edinburgh Castle is no exception. The historic fortress in Edinburgh, Scotland can be found on the Castle Rock which dates back to the Iron Age in the 2nd century AD. The establishment of a royal castle on the rock can be traced back to the reign of David I in the 12th century.

It remained as a royal residence until 1633. By the 17th century, its role was switched from royal residence to military barracks. As one of the most important strongholds in Scotland, Edinburgh Castle has had a turbulent past from the Wars of Scottish Independence in the 14th century to the Jacobite rising of 1745. It has been proclaimed as “the most besieged place in Great Britain and one of the most attacked in the world” in 2014 since research revealed that it faced 26 sieges in its 1100-year-old history.

Edinburgh Castle was recognised as a part of Scotland’s national heritage in the 19th century and has since undergone several restoration projects.

Most of the castle’s buildings nowadays go back to the Lang Siege of the 16th century, when its defences were destroyed by artillery bombardment. The castle houses the Scottish regalia, known as the Honours of Scotland and is the site of the Scottish National War Memorial and the National War Museum of Scotland. Its regimental museums also contribute to its status as a tourist attraction.

Edinburgh Castle is Scotland’s most-visited paid tourist attraction, as over 2.1 million visitors and over 70 per cent of leisure visitors made their way to Edinburgh castle in 2018.

Some of its notable attractions include the statues of Robert the Bruce and William Wallace which were added in 1929.

What is the Legend of Edinburgh Castle?

The legend of Edinburgh Castle, as most legends do, involves a mysterious disappearance. A few centuries ago, a young boy was sent down a secret tunnel within the castle to see where it leads. The plan was he would play his bagpipes and the people above would know where he was through the sound of the music.

They thought that the boy would simply exit from the other side of the underground tunnels beneath the Royal Mile. However, halfway through, the music suddenly stopped. They searched high and low for the boy, but he was never seen again and nobody could find out the reason for his disappearance.

Hundreds of years later, the young boy is commemorated every year during ‘The Royal Edinburgh Military Tattoo’, which is an annual concert performed by the British Armed Forces, along with Commonwealth and international military bands at Edinburgh Castle. At the very end of the event every year, one piper stands alone on the ramparts of Edinburgh Castle playing a mournful tune on his pipes in commemoration of the young boy who has been lost forever.

But that is not all. Like all legends, there’s a spooky aspect to it.

Some people have reported hearing music coming from inside the Castle’s chambers. Some say they have heard it while walking down the Royal Mile. According to local legends, this is the crying song of a lost soul that has been left, eternally wandering the tunnels looking for a way out.

Since its inception, the castle has been situated atop a volcanic plug that was formed 350 million years ago and served as an early human settlement in the Bronze Age.

Its history of wars and sieges has sparked many legends surrounding it, one of which is even tied to the Arthurian legends, specifically to the medieval Welsh epic poem Y Gododdin. According to this poem that dates back to the 7th century AD, a fortress named “The Castle of the Maidens” housed the “Nine Maidens”, one of which was King Arthur’s protector, the enchantress Morgan le Fay.

A document named the Orygynale Cronykil of Scotland and written by Andrew of Wyntoun, suggests that “Maiden’s Castle” was built by Ebraucus, King of the Britons.

The Pearl of Scotland

Edinburgh Castle, as we know it today, dates from the 12th century when David I, the son of Saint Margaret of Scotland, established the castle in loving memory of his mother.

In 1070 AD, Scottish King Malcolm III married an English princess named Margaret who was beautiful and generous in nature, so much so that she was known as Saint Margaret of Scotland or “The Pearl of Scotland.”

When her husband died in battle, she became grief-stricken and heartbroken. She died days later and her son David I constructed the castle on Castle Rock with its own chapel in her memory.

As conflicts continued between England and Scotland towards the end of the 12th century, Edinburgh and its castle became the focus of the invaders. It became obvious that whoever held the stronghold in their grasp, controlled the city of Edinburgh and consequently Scotland. The castle then earned the title of “the defender of the nation”.

When Robert the Bruce laid siege to Edinburgh Castle in 1314, he almost destroyed every building within the castle except for Margaret’s Chapel, which is now considered to be the oldest surviving building in Scotland.

England continuously tried to siege the castle and take hold of it; one of those sieges was against Mary, Queen of Scots in 1573, which lasted for two full years. In 1650, the infamous Oliver Cromwell succeeded in his attempts to capture the castle, killing Charles I, the last monarch to rule Scotland from Edinburgh.

Afterwards, Edinburgh Castle was turned into a prison where thousands of military and political prisoners were held over the years; from the Seven Years War, the American Revolution, and the Napoleonic Wars.

Nowadays, millions of people from all over the world travel to Scotland to visit its numerous world heritage sites, entertaining music festivals, historical re-enactments and get to know its mysterious tales and legends.

Edinburgh Castle is known as the most haunted castle in the city, so it’s no surprise it has so many visitors year round.

A child ticket is for ages between 5 – 15. Concessions include the unemployed and over 60s.

Have you ever visited Edinburgh Castle? Comment below your experience and your favourite part of the Scottish Gem.

If you enjoyed this check out more of our blogs:

Leap Castle: One of the Most Notoriously Haunted Castles | Irish Castles: Where History and Paranormal Activity| Legendary Castles in Ireland: The Truth Behind The Irish Urban Legends

The Best Food Guide to Belfast