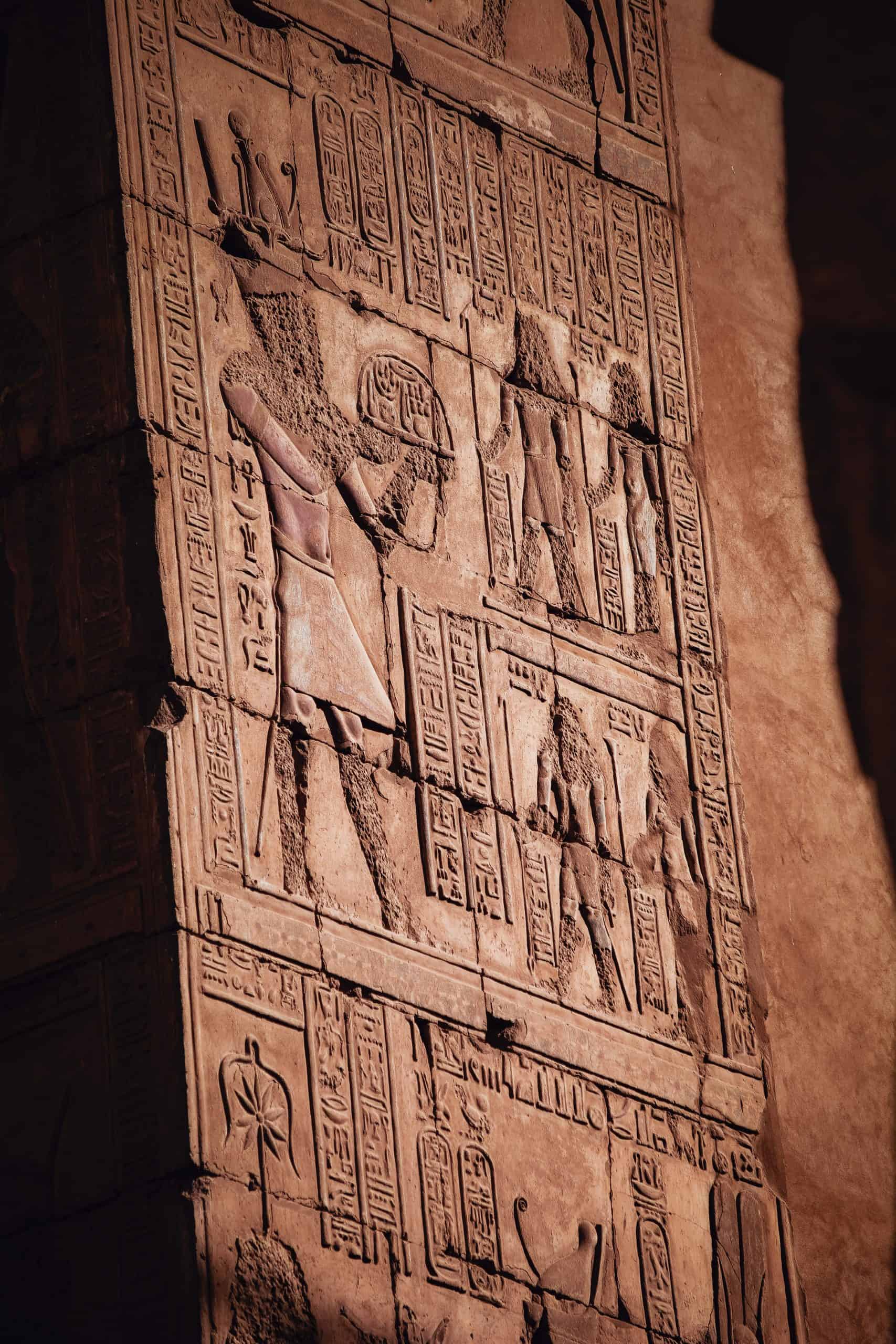 The Temple of Karnak is one of the most famous and important temples in Egypt. It is located about 3 km from Luxor city and it was Ibt Sot in ancient Egypt, which means the “chosen spot” for the throne of Amun, the god of the Sun. Karnak Temple is made up of a set of temples, buildings, and columns. The construction work carried out inside the temple of Karnak lasted for more than 2000 years, so each new ruler either demolished some parts or added others, that is why you will find statues and remnants of different eras within the temple complex from the Middle Kingdom until the Roman era.

The temple was dedicated to the worship of the god Amun, who is the head of the holy trinity of Thebes with Mut and Khonsu. The Karnak Temple contains huge historical records, as many celebrations and writings were recorded on its walls, as well as various building arts, sculpture, and engravings, and a rich record of historical events documenting the life of the ancient Egyptians.

Why Was the Temple Named by Karnak?

Karnak means the fortified village. At first, the temple was named Bar Amun which means the temple of Amun and it was also known by many other names like Nisot-Toa, meaning the throne of the two states, and Ebet Eset, the most magnificent seat.

The History of Karnak Temple:

In the period of the kings of the Eleventh Dynasty, Karnak was known as the holy land, and the worship of the god Amun took place at Karnak. The Karnak Temple influenced the increasing power and wealth of Amun and merged it with the sun god Ra. Some parts of the temple are important and well-known like the White Chapel of Senusert I and the Court of the Middle Kingdom. Senusert I built these sections of the temple with limestone from 1971 BC to 1926 BC.

If we go through the modern state period, especially the kings of the Eighteenth Dynasty, they worshipped Amun after he was merged with Ra and became Amun Ra and he became the god of war. In the era of the eighteenth and nineteenth dynasties, there were many military expansions, so it was necessary to take interest in his temple to gain blessings for their wars.

In the temple of Karnak, Amenhotep built a temple for Amun Ra then came Tuthmosis who built the fourth and fifth pylon and two red granite obelisks; one of them is still standing until now. After that came Queen Hatshepsut, who built the eighth pylon, and the two famous obelisks which are 29 meters in length and she built some shrines as well.

King Thutmose III built several shrines and surrounded the obelisks of Hatshepsut with mud-brick and its remains still exist today. Amenhotep III built the third edifice and also the class giant pillars in the ceremonial hall and Akhenaten too, who supported the worship of Amun and symbolized the sun disk and built a temple for him at Karnak but it was soon destroyed by King Horemheb due to the influence of the priests and built second and ninth edifice And tenth.

One of the miracles of the ancient Egyptian civilization that is located inside the Karnak Temple is the Holy Lake which is 80 meters in length and 40 meters in width and it is not far from the Nile River. The uniqueness of the Holy Lake stems from the fact that it doesn’t dry up throughout the year, the water level does not increase or decrease even with the change of the water level of the Nile and it has been the same for more than 3000 years. It was created by King Thutmose III between 1481 and 1425 BC.

Kings and priests used to wash in the lake before performing any religious ceremonies or national ceremonies attended by the gods and the lake was connected with the Nile River through a canal.

The Holy Lake was surrounded at first by a huge wall but it was destroyed and near the lake, you can find the Pharaonic scarab. On the northern and southern sides of the lake, there is a scale of the Nile River with which they could determine the dates of the flood every year and stone stairs to help them get in and out of the water.

Records even show that the lake was washed daily, as servants cleaned it, with specially made tools, from any impurities or residues of birds to keep its luster to and to see the bottom of the lake extending for a few meters from the top.

The Rams Road is a road that links the Luxor Temple with the Karnak Temple. On either side of the road, there are statues of sphinxes with a ram’s head s in the Ancient Egyptians period, the ram stood for the god Amun, to protect the temple. This road was called WAt-nTr by the Ancient Egyptians which means the path of God, and it had 1200 statues. All the statues were carved from a single block of sandstone with the king’s name and title on them along with praise for him. The statues were in two forms, one with the body of a lion and the head of a human and the other form with the body of a ram and the head of a ram which symbols Amun Ra.

The temple is located on the southern side of the courtyard. It was built for the rest of the holy boats and it is 52 meters. There, you can see two statues of King Ramses. Beside the edifice is a rectangular and exposed courtyard with two rows of columns on each side and you will see in front of each column a statue of the king. The hall that contains the columns is considered the largest colonnade hall in the world, which has an area of 6000 square meters and it leads to an entrance that was rebuilt by Ptolemy III and IV.

The Temple of Mut:

The Temple of Mut is located just south of the Amun Temple, King Amenemhat I was considered the first to build the foundations of the temple of the goddess Mut in the Middle Kingdom, and then King Amenhotep III built the rest of the temple. Mut, the god of death, was one of the most important religious beliefs of the ancient Egyptians, as she was the wife of the god Amun Ra and she was called the mother god. The temple is surrounded by a large wall that was built during the reign of the Thirtieth Dynasty and in order to reach the temple, you will have to walk through the Rams Road.

The Phenomenon of Sun Rays Passing over the Temples of Karnak:

The phenomenon consists of the sun rays passing perpendicularity on the Karnak Temple and it takes only one hour, where the sun rays are perpendicular to the shrine of the Holy of Holies for a couple of minutes and then spreads inside the holy sites in the middle of the day.

This phenomenon was discovered about 15 years ago only by a temple guard. It begins at sunrise on December 21 of each year and marks the winter solstice. This day was considered the germination season where crops sprouted, flowers bloomed, and the peasants began to work hard in the fields after the long flood season. Tourists come from all over the world to Luxor just to see this wonderful phenomenon.

“Greetings to you, O you who made your pilgrimage to Upper Egypt, and you looked to the glories in the Happy Valley. Here, history begins, and the universe is born. Here, the sacred power that separated water and land was revealed and created the universe in a few days, so feel the magnificence in the front, for that is the resting place of the master of the gods.”

With these words, the Sound and Light Show begins every day at Karnak Temple attended by many tourists from all over the world alongside numerous Egyptians. This magnificent show is done by the best directors, storytellers, and musicians, and the performance was recorded by the most famous artists in the world, who did the vocal performances in many languages.

The project of the Sound and Light Show started in 1961 in the Grand Pyramids area, and then it was spread in the rest of the archaeological places and it was opened in the Karnak Temple on December 19, 1972. Many famous people visited the Sound and Light Show at Karnak Temple, such as French President Valerie Giscard d’Estaing in the 1970s, President Nicolas Sarkozy and his wife, and also Tony Blair, former British Prime Minister.

Karnak Temple is a Sight to Behold

Karnak Temple is definitely one of the most beautiful constructions built by the Ancient Egyptians, where tourist comes from all over the world just to visit this magnificent complex in the city of Luxor. You will surely enjoy your time at this stunning and huge temple in this beautiful city.