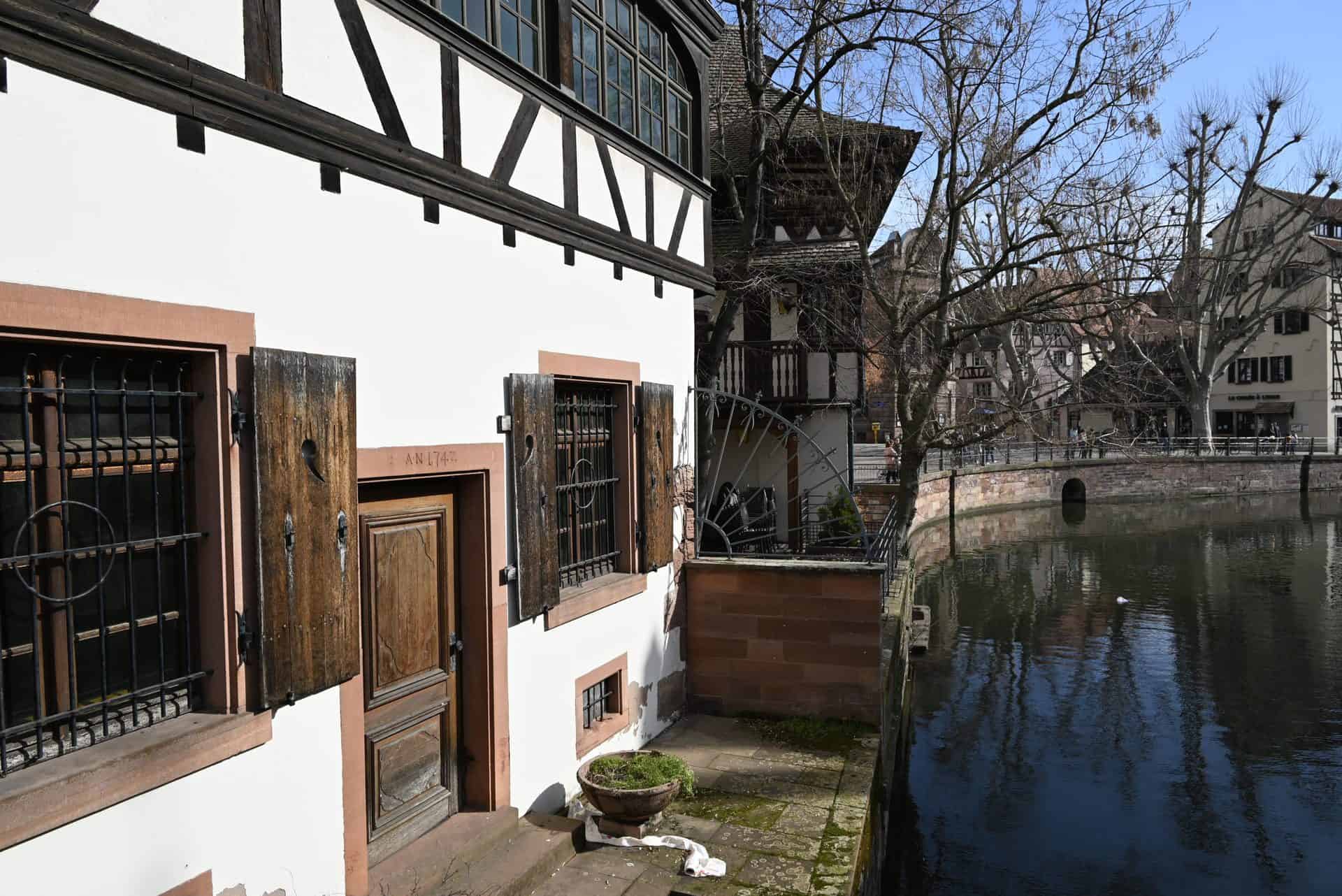 Located in Northeastern France near the German borders, Strasbourg is the capital of the Alsace-Champagne-Ardenne-Lorraine region, which is part of the Grand-East region. It is also the official seat of the European Parliament.

Because of its location close to Germany, Strasbourg has culture and architecture with both German and French influences. The city’s treasure is the amazing Cathedral Notre-Dame, where you can find the fabulous astronomical clock. From halfway up its 142 metres high bell tower, Cathedral Notre-Dame gives visitors the opportunity to enjoy a panoramic view of the Rhine.

Strasbourg is a city full of life and culture. Moreover, it is rich in monuments and history. In fact, the French National Anthem “La Marseillaise” was written in Place Broglie, Strasbourg by Rouget de Lisle in April 1792.

Four Facts To Know About the Strasbourg’s Cathedral

Strasbourg’s Cathedral is an absolute masterpiece of Gothic art. During its construction in 1015, Cathedral Notre-Dame was created in the Romanesque style. Nowadays, we can find remains of this style only in the crypt.

Strasbourg’s Cathedral is the oldest Gothic Art Cathedral in the World. Its single spire peaks at 142 metres, which made it the highest tower in the Christian world until 1874. The Cathedral Notre-Dame was built on foundations from 1015. The foundation are unique because of their silt and clay base reinforced by wooden stakes embedded in the water table.

The Tower That Never Came To Be

The construction of the current cathedral took nearly three centuries. Originally, it was designed on the model of Notre-Dame de Paris, with two square towers. Unfortunately, by the end of the 15th century, the project of the second spire tower never succeeded and it was scrapped.

Historians give various reasons as to why the second tower was not built: lack of financial means, the Gothic style had gone out of fashion, the soil was not stable enough, and many others.

The astronomical clock is the main attraction of the cathedral, created by the Strasbourgeois Jean-Baptiste Schwilge, a mathematician, astronomer and mechanic. Each year, 3 million visitors meet in front of the clock at 12:30pm to observe the daily film shown on the Astronomical Clock as well as the procession of the apostles.

The clock shows time, civil and religious calendars, and astronomical data. It even recorded a lunar eclipse on March 28th, 2006.

The current clock is the third in the history of the cathedral. The first one ran from 1354 until the beginning of the 16th century. The second was made in 1571 and ceased to function on the eve of the French Revolution. It was the result of the work of a painter, two watchmakers, and two mathematicians, including the famous Conrad Dasypodius. Legend says that he would have had his eyes closed, so as not to reproduce a clock identical to the Strasbourg one.

The Strasbourg’s Cathedral houses the richest ensemble of bells in France. Its double ringing system is unique and there is nothing like it throughout the rest of Europe.

The hearts of Notre-Dame Cathedral are composed of four bells for the hours, 16 flying bells for the services, the angelus and the glas. The bells are distributed between the belfry at the front and the Klotz tower erected at the rear of the building in 1878.

Located in the belfry, the great drone, the most impressive bell, is nearly six centuries old.

Place Kléber is one of the most famous squares in Strasbourg.

The square was originally called “Barfüßerplatz” in German, which can be translated into “the square of barefoot”. This refers to the Franciscan monastery that occupied the site until its destruction in the 16th century. This square changed names many times until it became “Place Kléber” in 1840. Jean-Baptiste Kleber (1753 – 1800) was Napoleon Bonaparte’s general.

This Alsatian personality distinguished himself during the wars of the French Revolution and during the Egyptian campaign. Kléber was assassinated by a Syrian student on the 14th June 1800 and his body was then brought to Strasbourg. The vault of the general was placed under the statue inaugurated in 1840, in the centre of the square.

The statue represents Kléber standing, holding the letter of Admiral Keith who asked for the capitulation of the French troops. Sculpted by the Alsatian sculptor Philippe Grass, the statue measures 3.10 metres.

Founded around 1100, the Gutenberg square is one of the first places founded on the Great Island of Strasbourg. It was known as Place Saint-Martin, then Place du Marché-aux-Herbes until 1840.

In the center of the square stands the bronze statue of Johannes Gutenberg, a famous printer. The work of David d’Angers was inaugurated on 24th June, 1840, followed by three days of celebration.

The four panels on the pedestal of the statue summarize the benefits of the invention of printing for humanity.

Gutenberg lived in Strasbourg between 1434 and 1444. It was in the Alsatian capital that he invented the principle of printing with metallic characters, before developing it in Mainz. The invention of printing contributed to the prosperity of Strasbourg.

One must-visit location when visiting the Alsatian capital is obviously the historic district of La Petite France. This remarkable site is highly popular with tourists for its historical value and its bucolic charm. Formerly a quarter for fishermen, tanners, and millers of the 16th & 17th centuries, La Petite France is famous for its half-timbered houses of the time.

The History of Strasbourg

While Strasbourg still belonged to the Roman-Germanic Empire in 1492, a terrible outbreak of Syphilis broke out in Europe. At that time, the French and Germans fought in the Naples region, during the Italian campaigns. Several German mercenaries contracted the disease and subsequently returned to Strasbourg and other cities in the northern Alps. They were treated in hospices away from the population, since the disease was unknown at the time.

In Strasbourg City, they decided to isolate the sick persons in a neighborhood: the district of tanners. This was not appreciated by those who lived nearby, because of its strong smell. All the people who were affected by the “French evil” (Syphilis), known as the Franzoses, were housed in buildings dedicated to them. The Strasbourgeois ironically nicknamed this district “Petite France”, in reference to the “French evil”.

Over time, this nickname has applied to the entire neighbourhood and still remains today.

Covered Bridges are located at the western end of the neighbourhood “La Petite France”.

These are three arched bridges span the arms of the Ill (one of the main Strasbourg’s rivers). The structure is dominated by three towers dating from the 14th century. These powerful square towers were part of the medieval ramparts of Strasbourg.

Originally there were four towers. Only three came remain in their original aspect because they were recycled in prison: The civil prison for “the Heinrichsturm” (lock keeper tower), the military prison for “the Hans von Altheimsturm” (Woerthel tower) and “the Hannemansturm auf der Denne” (French tower). The fourth, “the Malzenturm”, was destroyed in 1869.

The function of the Covered Bridges was to protect the river accesses of Strasbourg. However, the Covered Bridges are not covered! In the past, they were covered with a wooden roof with tiles. They were provided with harrows and closed upwards by a wall pierced with loopholes. In 1784, these roofs were definitively removed, however Strasbourgeois have since continued to call them Covered Bridges.

Visit a bakery in Strasbourg City and order a real Alsatian Bretzel. Your taste buds will thank you!