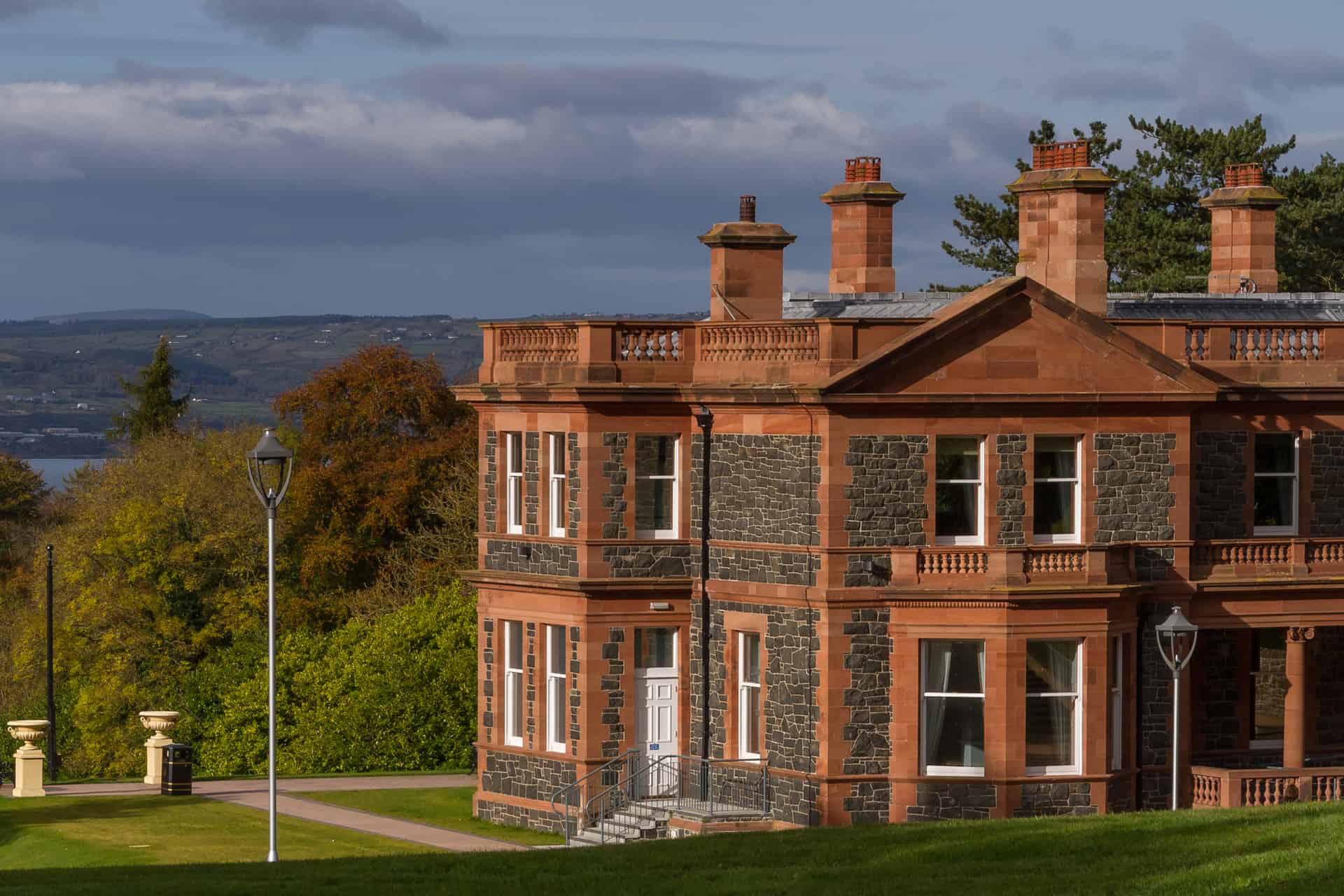 The Ulster Folk and Transport Museum are one of the different museums in Northern Ireland that gives visitors the chance to experience life over more than 100 years ago. While at the same time experiencing one of Europe’s most comprehensive transport collection. One of the different buildings which are situated in this museum and considered part of the Ulster Folk and Transport Museum is the Cultra Manor.

It was originally built as a large plain house with a central bow and a battlemented parapet. The front of this manor has projected pedimented ends that are joined by balustraded Ionic Parapet; the right hand projecting forth like a porch. Inside the Cultra Manor, there is a long, two-storey service wing which is joined to the main block by a wing.

History of the Manor

This manor was owned by Sir Robert Kennedy who retired to it in 1912 after he built it in 1902. The Kennedy’s family former home was the Cultra House which had passed out of their ownership in the 1870s. Sir Robert and his wife Lady Kennedy died within a few months from one another. They left the property for their four daughters. After World War II, the family found out that the maintenance of the house would cost them a lot of money and thus another smaller neo-Georgian house was built for them in the same grounds.

The manor house and the pleasure gardens were then sold to the Ulster Folk and Transport Museum in 1961 and conversion of the building was undertaken. This led to the transformation of the place from the inside. Which included re-allocating the main rooms as exhibition areas. The servants’ quarters as workshops and library and extending the garage for use as an administration block.

In 2010, there was a huge sum of money spent on Cultra Manor in order to transport it to what we see today. It now provides an area where many interesting events can be held. One of the events which are held in the Cultra Manor is the Limited Edition Afternoon Teas. This is a special event which takes you back in a time of how people enjoyed afternoon tea. It also lets people experience the history surrounding the Kennedy family.

One of the things making Cultra Manor famous these days is the fact that it is now being used as a wedding and attractions location. One of the things differentiating this Manor is that it provides those staying at it with the best views across Belfast Lough. Cultra Manor is becoming a popular wedding venue in Northern Ireland. Especially for couples seeking something a little different. Weddings can also use the Folk park itself – along with the manor house for an extra special day.

Cultra Manor, located in the town of Holywood in Ulster, was the former residence of the Kennedy Family until the 1870s. It is one of the last mansions of the landed gentry to be built in Ireland.

The manor was sold in 1961 to the Ulster Folk Museum, and the building was converted to accommodate exhibitions, workshops, and a library. It opened to visitors in 1964.

The house is surrounded by beautiful hills and glens to the east and west, with walks and bridges.

In 2010, Cultra Manor was refurbished with an estimated budget of £3 million. The Edwardian-style manor is now a suitable setting for gala dinners, awards ceremonies, conferences and meetings for up to 200 people. Guests can also be accommodated on the beautiful terrace leading to the gardens at the back for dinner or drinks or visit the Ulster Folk & Transport Museum.

The area is perfect for exploration opportunities as it is littered with thatched cottages, farms, schools, workplaces, churches and shops from over 100 years ago. Set in over 170 acres of rolling countryside overlooking Belfast Lough, visitors can admire the traditional crafts and meet farm animals.

Experience life more than 100 years ago, and explore one of Europe’s most comprehensive transport collections.

Encounter costumed locals, demonstrating traditional crafts in cottages, farm dwellings, schools, and shops, in addition to horse-drawn carriages, vintage motorbikes, and cars at the Transport Museum, along with exhibits including rare photographs of the Titanic.

Visit the Land, Sea and Sky gallery at the Ulster Folk & Transport Museum and take a voyage back in time with the last Ulster schooner Result. Over her 125 years of existence, she has been a workhorse, a warrior and a film star. Follow her journey through the decades in our exhibition.

The Result was built in Carrickfergus Shipyard, County Antrim, for the coastal cargo trade. She is the last Ulster built ship left, out of the hundreds of small sailing ships that plied their trade around the coasts of Britain and Ireland; and were once of such importance to coastal communities.

Follow her journey through the decades in our new exhibition and discover more about her life as a Q-ship in the First World War fighting German submarines, her starring role on the silver screen and her final voyage to where she now sits overlooking Belfast Lough.

The shop is designed to illustrate the range of work undertaken by a letterpress printer in a small town in Ulster in the early 1900s.

There has been a printing industry in Ulster for over three hundred years. By the late 1800s, the printer’s shop had become part of the fabric of life in Ulster’s towns. This exhibit was sponsored by the firm of W & G Baird, one of Ireland’s most important printers.

Ballydown National School was built in 1865 and its original location was next to Ballydown Presbyterian Church, near Banbridge County Down.

This building is modelled on both linen weavers and small farmers’ houses built in the 1850s in central. Many houses like Ballydugan were occupied by weavers and their families.

This is the original building of the church, which was originally situated in Selshion townland. It is dedicated to St John the Baptist in 1793. It was moved to the Folk Museum in 1990.

The church is quite rare because it was built more than fifty years before the repeal of the Penal Laws, which regulated the rights and status of Catholics in Ireland.

This building was built in the 1830s and was originally situated on Rowland Street, Belfast. It was moved to the Folk Museum in 1978.

A wide variety of woodwork was carried out in similar workshops, such as repairing and horse-drawn carriages and furniture.

This church was built in 1790 and was moved from Carnacally, Kilmore, County Down to the Folk Museum in 1976.

The spade mill was built in the 1850s and was moved from the Derry to the Folk Museum in 1960.

The Picture House is a cinema that was built in the 1850s in Gilford, County Down. It was moved to the Folk Museum in 1996.

The building operated as a silent cinema until 1931. It was originally used as a hay store and was later adapted for use as a cinema, shortly before the First World War.

The films were projected directly onto a whitewashed wall. For several decades the Gilford Picture House provided popular entertainment for the village of Gilford and its immediate locality. The audience of the Picture House mostly consisted of local mill workers.

The Gilford Picture House closed around 1931 but the building remained unchanged over the following decades.

The Corner Shop was built in 1889 and moved to the Folk Museum in the late 1980s. This shop is typical of a traditional urban corner shop.

Things to do While You are Here

Cultra Manor’s grand interior and features are perfect to hold weddings and evening affairs. Additionally, civil and religious ceremonies can be held in the Drawing Room. The terrace is also perfect for scenic wedding photo sessions.

The Kennedy Room where all these beautiful occasions are held is actually named after the family who owned the estate. It takes up to 150 guests seated at round tables.

The Drawing Room is also perfect for entertainment and the evening buffet can be laid out in the dining room.

You can have the wedding of your dreams at Cultra Manor, and you can also get superstar treatment through some of their added offers to make your special day even more special!

Ulster Folk and Transport Museum are one of the famous attractions that people like to visit while in County Down, Northern Ireland.

Have you ever been to the museum? What did you think? We would love to hear about your experience in the comments below.

Also, check out some of our other blog posts that might interest you such as; Independence day at Ulster American Folk Park | Ulster Folk Museum | Carrickfergus Museum | Down County Museum | Irish Linen Centre and Museum | Titanic Museum | Ulster Transport Museum | Armagh County Museum