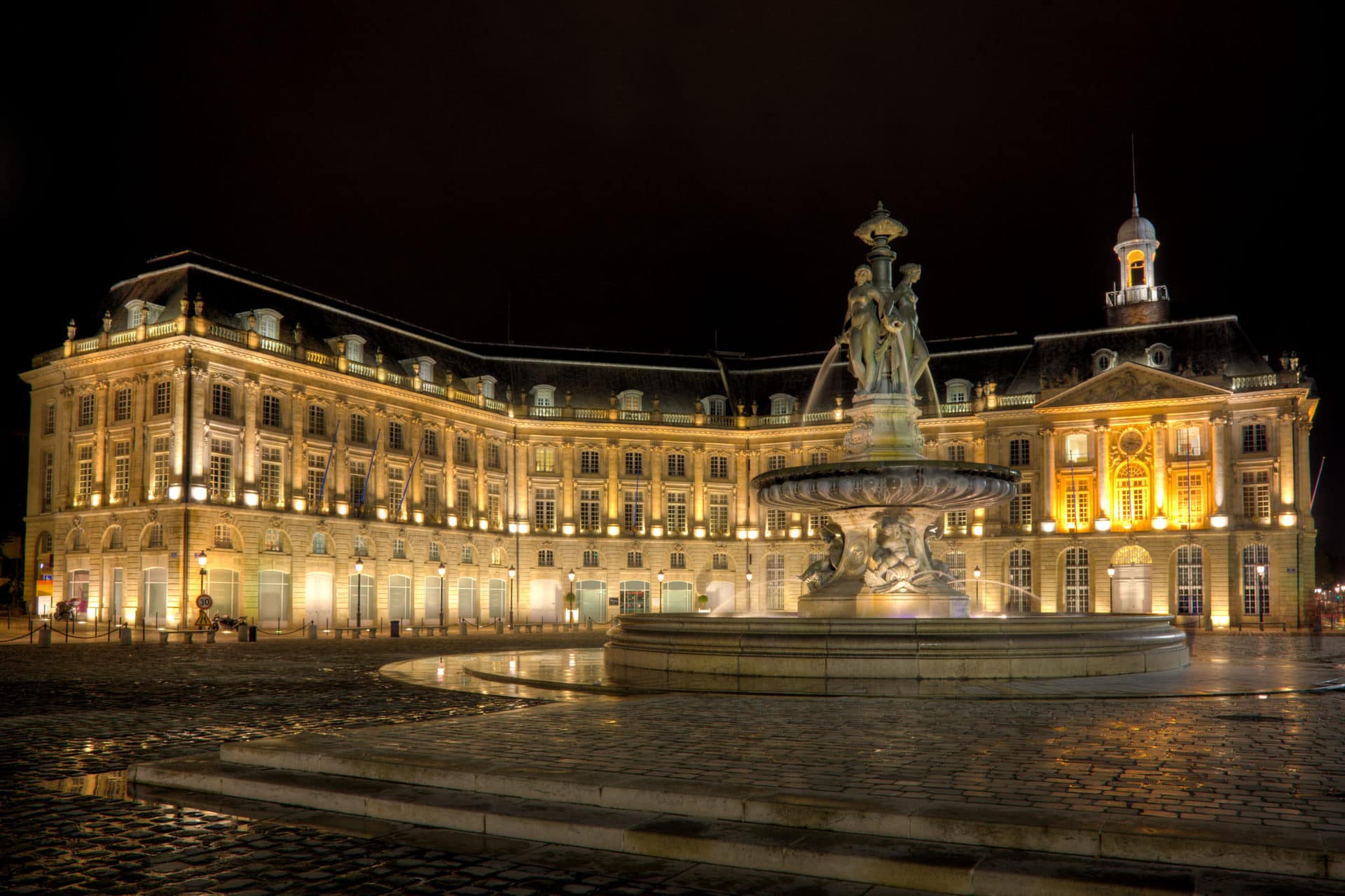 The city of Bordeaux is a very attractive tourist destination in France. It is located on the southwestern side of France on the Garonne River. Bordeaux city is called the Port of the Moon because of a crescent-shaped curve on the Garonne River, and this made its trade flourish. It is one of the most famous cities in the world after Paris, and it is about 562 km from the city of lights.

Bordeaux has a great history, it is where many nobles lived and it owns the largest ancient palaces of kings and nobles. Many of these palaces were announced as world heritage sites by UNESCO in 1998 and it contains more than 350 buildings classified as historical monuments.

The weather in Bordeaux city is usually rainy. The average temperature daily is between 6 degrees in January and 21 degrees in July. Winter starts from December till February and summer from June till August.

Things to do in Bordeaux

Bordeaux is another beautiful city in France, which is considered one of the top attractions there and many tourists love visiting it. This will be a fantastic journey to do, so let us see the best places to visit and what you can do there.

Des Concussiers is a large public square in Bordeaux. The square is located in the center of Bordeaux city, and this square is considered the largest in all of Europe. It was built from 1818 to 1828. And you can find the amazing Girondist Fountain with beautiful bronze horses at its base.

That Fountain was a front and an arena for honoring many politicians, the original one was destroyed in World War ll but it was restored once again.

2. The City of Wine in Bordeaux

The City of Wine is a great building, it overlooks the bank of the Garonne River, and it focuses on the history of winemaking from the beginning, starting with the cultivation of grapes, and the different stages it goes through until it turns into the famous Bordeaux wine.

The cultivation and trade of grapes date back hundreds of years, so it also includes exhibitions of a number of products that are made from bottles of recycled wine. If you are a wine lover this will be the best place you will visit.

Bordeaux Cathedral is one of the important attractions, which is located in the middle of Bordeaux and it was built in the 12th century and was announced as a UNESCO World Heritage Site. Its façade is fascinating and includes sculptures of tThe Last Supper.

In summer, there is a festival held there which is the Bordeaux International Organ Festival which is one of the amazing festivals in the city.

Also, there is the Water Mirror which is a decorated pool that reflects the place de la Bourse building facades. It is considered a UNESCO World Heritage Site, but don’t forget while you are there to take wonderful pictures in the square.

Aquitaine Museum is one of the largest museums outside of Paris. It shows you the history of Bordeaux from the prehistoric era till modern times and it has many pieces of antiquities like Laussel Venus which is an artifact from 25,000 BC, a statue of Hercules from the 3rd century and gold coins from the 2nd century.

Also among its collections, is the figure of a Knight of Curton from the 13th century and the Montaigne’s tomb from the 16th century. In front of the museum, there was the monument of Montaigne, which visitors used to touch the statue’s foot to absorb the wisdom of the illustrious man.

6. The Grand Theatre of Bordeaux

The Grand Theatre of Bordeaux is one of the most magnificent buildings in the city, it was built in 1780 and designed by architect Victor Louis. In front of the theatre, you will see 12 colossal Corinthian columns and beside them, there are 9 statues that represent muses and the goddesses Juno, Venus, and Minerva.

When you enter the theatre, you will see a spectacular lobby and a lovely staircase and it is decorated with 400 light chandeliers made of Bohemian crystals. The best way to explore the theatre is by attending one of its ballets or opera performances to enjoy it and have an unforgettable night.

St. Michael’s Basilica is an important church in Bordeaux because it is on the Route of Santiago pilgrimage trail. St. Michael’s Cathedral is a UNESCO World Heritage Site. It is located in Meynard in Bordeaux City, and it took 200 years to build.

The church has a bell tower known as the Arrow, which is the main attraction of St. Michael’s Church. This bell tower dates back to the 15th century. The tower has 37 floors, and it is next to the cathedral rather than above it. Visitors can climb 230 steps to the top to enjoy panoramic and amazing views of the city.

The Museum of Fine Arts is located in Jardin de la Marine Public Park. It is a part of the Town Hall building and it contains a large collection of European art history.

Inside the museum, you will see masterpieces by many artists, such as Picasso, Veronese, Van Dyck, and many others. The paintings are arranged by eras and countries, such as the Renaissance and then the 17th till 18th century.

The Big Clock is one of the important places in Bordeaux from the medieval ages, it was built between the 13th and the 15th centuries and weighs about 7,000 kilos.

The bell rings on special celebrations like Remembrance Day on the 11th of November and the National Holidays on the 14th of July. In the old days, the tower was used as a prison and prisoners were locked and sealed up by a thick door.

Saint Catherine Street is the longest shopping street in Europe and it starts from the Grand Theatre till Victory Square. The street is active at all hours and it is full of shops. In February and July, it is the best time to buy from there due to the sales that take place in many shops and also there are stalls that are put up on the street.

Also, you can rest in the street in any of its restaurants and cafes and have a cup of coffee or even a lovely meal. If you are a clothing brand lover then you will find these shops in the upper part of the street.

Victory Square is a famous square in Bordeaux and in the middle of the square, there is a piece of art that is designed by a Czech sculptor who lived in France, Ivan Theimer. It was made with marble blocks from Languedoc and a column 16 meters tall.

There are also two tortoises monuments designed by Ivan Theimer, that the children love playing with. Also surrounding the square you will see the triumphal arch and townhouses from the 18th century.

Saint Seurin Basilica was considered a UNESCO World Heritage Site as it was a stop for pilgrims on their way to Saint James and it was built during the 14th and 15th centuries. The choir features a stone abbot’s throne and ornate stalls.

The choir chapel is decorated with a beautiful Gothic style, it shows 12 alabaster reliefs and a figure of the Virgin Mary dated back to the 14th century.

The Chateau de la Brede is a medieval castle, it is located south of Bordeaux and it was built in the 13th century and you can reach it by car in 30 minutes. It is surrounded by 150 hectares of forests and it was built on two islands among a lake-sized moat.

The Chateau de la Brede is open for tourists from April till November, you can tour the chateau and the park that was designed in the English style.

Stone bridge is one of the most famous tourist attractions in Bordeaux city, it consists of stones and it was designed in 1817 by architect Claude Descamps and was finished in 1821.

Places to stay on your visit to Bordeaux

While you visit Bordeaux, you will need a place to stay so you can complete your journey in this beautiful city and here are some hotels that you can pick from:

It is a five-star hotel with a beautiful garden surrounding it. The hotel also includes a restaurant that offers some wonderful meals and it has comfortable rooms. Yndohotel is located in the historical city center and it is in a 19th-century mansion.

Hotel Burdigala is located near the famous Saint Catherine Street in Bordeaux, it is a four stars hotel with great rooms and a restaurant that offers delicious cuisine.

Le Boutique Hotel is located near many tourist attractions and restaurants. It was built in the 18th century and it offers a spa and great room service.

Malaga: 12 Things to do in the Beautiful Historic City

Toulon: 12 Magnificent Things to do in The Coastal City