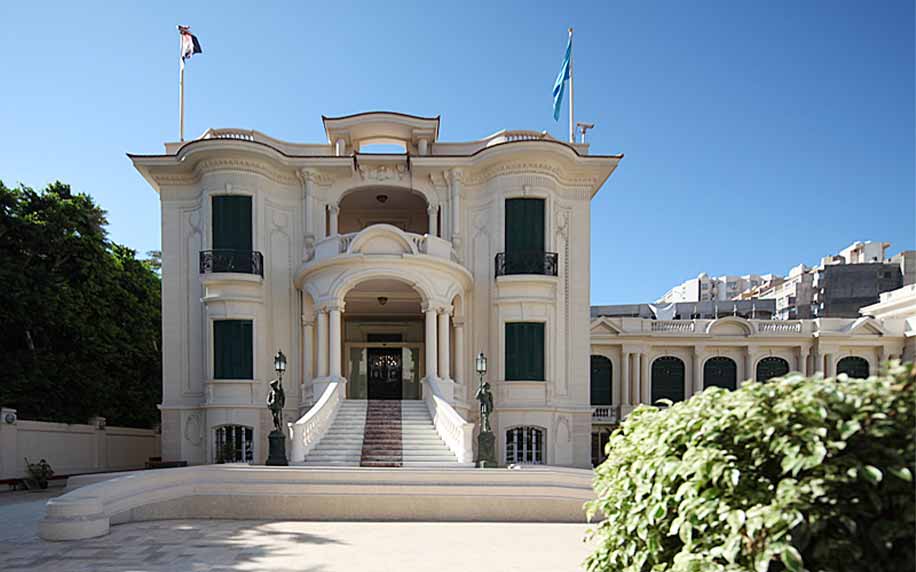 Alexandria, Egypt, has many museums, most of which are dedicated to ancient antiquities from ancient Egypt or Rome or Greece since the last two were the cultures that interacted the most with the ancient Egyptians. On the other hand, some museums showcase more recent artefacts collected from many sources. Places like the Royal Jewellery Museum, one of the largest museums in Egypt, which lies in the Zizenia neighbourhood of Alexandria.

The Royal Jewellery Museum is housed in the former palace of Princess Fatma Al-Zahra’, a descendent of Muhammad Ali Pasha, the founder of Modern Egypt. The building itself is considered a historical work of art, so it was natural to transform it into a museum to display many collections of jewels and jewellery of the Muhammad Ali Dynasty who ruled Egypt for nearly 150 years from 1805 until 1952. Not only that, but the museum also contains 19th-century paintings, statues, and decorative artworks spread across its rooms, halls, and lobbies.

The jewellery left by the Royal Family was kept unseen until a 1986 decree to assign Princess Fatima Al-Zahra’s Palace in Alexandria as a special museum to house those rare and exquisite pieces.

The museum first opened in October 1986, and after several years of renovations and expansion, it reopened in April 2010.

The Design of the Royal Jewellery Museum

The palace of Princess Fatma Al-Zahra’ was originally built in 1919. It has 4,185 square meters (45,050 square feet) of interior space and is surrounded by gardens. It has a beautiful European architectural design as it was built by French, Italian, and Belgium architects and artists following the school of Michael Angelo using the calm style of colouring and decorations.

The ceilings are masterpieces in and of themselves as the ceilings in every room were hand-painted by Egyptian, Italian and French artists. Some ceilings depict stories from Greek mythology, various historical scenes, and natural landscapes, while most of the second-floor ceilings depict parts of famous French and Italian love stories. One of the rooms has a painting on its ceiling depicting the difference between heaven and hell. Another room is ornamented with wall drawings depicting the tales of Homer’s Iliad.

The walls of the palace are panelled with two types of wood, either oak or chestnut or painted with huge tableaus of French medieval tales.

The palace is also decorated with glass windows containing artwork that depicts European historical scenes. The floors of the palace are decked with the finest types of wood imported from Turkey and other European countries.

The design of the palace uniquely merges European and Islamic styles and reflects the remarkable taste of the princess in the paintings, gilded ceilings, and mosaics decorating the many rooms of the palace.

The palace consists of two large wings. The Eastern Suite has two halls and a gallery with rich coloured windows and decorations all over the walls. The Western Suit consists of two floors. Each has four large halls with three bathrooms coated with decorative coloured ceramics.

The main bathroom is quite beautiful fitted with beautiful ceramic walls and floors creating gorgeous paintings and true works of art. The floor of the bathroom is coated with gold as well. The ceiling is made of painted glass that permits natural lighting into the bathroom as well. Both the bathrooms in the palace are lined with white pieces of porcelain made by the French prestigious porcelain house of Sevres. The walls of the two bathrooms are hand-painted with depictions of swimming nymphs, and images from the well-known tales of La Fontaine, and other fairy tales all.

An elegant foyer connects between the two suits. The foyer is magnificent to walk through as it’s decorated with ten glass frames in the shape of ten doors with drawings representing European historical scenes and legendary tales like Romeo and Juliet. In order, window by window, you’ll follow the tale of two lovers from the moment they met, through their courtship and love, to their eventual union and the birth of their child.

The museum also includes a café, a seminar hall, and a restoration laboratory, all of which were added during the restoration in the early 2000s.

The Collections of the Royal Jewellery Museum

Once you walk into the palace, after climbing the staircase, you’ll find a photograph of the princess herself to your right.

Walk a few steps further and you’ll come across a stunning piece which is the crown of Queen Shwikar, King Fuad’s (King Farouk’s father) first wife, which is said to be one of the largest and most beautiful crowns of the members of the royal family in Egypt. The crown is made of palatine adorned with pearls. The set also includes earrings designed similarly to the crown.

Right across from it is a jewellery set once owned by Queen Farida, the first wife of King Farouk, and another hall upstairs is dedicated to her belongings. Among the exhibits is her gold and palatine crown ornamented with 1506 pieces of diamonds.

Walking up to the first floor, exploring the halls, and going from room to room, you’ll find many curious and stunning objects on display. The Royal Jewellery Museum has more than 11,000 objects and collections, including the collection belonging to Prince Mohamed Ali Tawfik, consisting of 12 bronze and gold cups. It also includes 2,753 lobes of precious stones and diamonds. Other unique objects in this collection include a money bag made out of gold and other precious stones and many glass cups decorated with 977 lobes of diamonds.

Another collection dates back to the ruling period of Saeed Pasha, showcasing 4,000 Roman, Persian, Byzantine, and Coptic coins.

However, some of the most impressive items in the Royal Jewellery Museum are those that belonged to Muhammad Ali pasha himself, most of which are ornamented with diamonds, such as his snuff-box, sword in the shape of a snake decorated with 600 diamonds gathered from the collections of many princesses of the Royal Family.

There is also a diamond and emerald inlaid collar adorned with 16 decorative motives; eight carrying the inscription “Muhammad Ali” and eight in the shape of a gold flower with diamonds. However, this collar was created during the reign of King Fuad, not Muhammad Ali. A very rare object is also the photograph of Muhammad Ali himself, taken in the 1840s.

There is also a collection that belonged to King Farouk, the last King of Egypt, featuring the sistrum he used as a child to call his servants. What is so interesting about it is that it is carved in the shape of a royal crown and is made out of palatine, diamonds, emeralds, rubies, and small pieces of gold.

You can also find a group of 37 golden candles, that was lit when he ascended to the throne in 1937, hence the number of the candles.

Some of his belongings include a chess set gifted to him by his brother-in-law the Shah of Iran, his personal stick made of ebony and gold, a set of cups each decorated with 229 pieces of sapphire and 29 pieces of diamonds, the tea set given to him and his wife on their wedding day by the Pashas of Egypt, a plate made out of agate given to him by the Czar of Russia.

You can also find the collection of jewellery belonging to Princess Fawzeya, the sister of King Farouk and the wife of the first wife of Shah of Iran, Mohammad Reda Balhawy, which made her Princess of Egypt and Empress of Iran at one point. Her collection features a stunning palatine ring with her name carved on it and an ornamented belt with 240 diamonds.

The only piece in the museum that belongs to Queen Nariman, King Farouk’s second wife who left the country with him headed for exile in 1952, is a jewellery set made of gold studded with diamonds, rubies, and pearls.

Another section of the museum is dedicated to antiques and gifts that were given to the Royal Family over the years. It includes the famous plate that Queen Eugenie gifted to Khedive Ismail on the occasion of the inauguration of the Suez Canal. What makes it so rare is that its price is actually estimated at around 15 million pounds. The plate is ornamented with diamonds, sapphires, and emeralds.

Other curious and dazzling pieces in the museum include a pair of gold binoculars encrusted with diamonds, rubies, and emeralds, a large royal clock decorated with diamonds and has the shape of an elephant made out of ivory and sapphire, several golden and palatine chest pins, pocket watches made of gold and precious stones some of which are decorated with portraits of people and some with inscriptions, and even a luxurious desk set consisting of three gold inkwells, one gold vessel for the sponge, one double pen case, a pair of steel scissors, one ebony ruler pen, an envelope opener, and a vessel for sandstones. If you thought that was all, think again. These items go in a wooden box decorated with 166 brilliant diamonds. Additionally, there are many dazzling pieces commissioned by the greatest designers in Europe and were once worn by the queens and princesses of Egypt’s royal family.

Some of the bigger pieces on display include a trophy-like statue that symbolizes Egypt and its touristic locations, which is said to have travelled the world to promote tourism in the country. The trophy is made of pure gold and weighs 6 Kg.

These promotional efforts worked because you’ll find opposite it another trophy that weighs 16 Kg and was given to Egypt on the occasion of becoming the most visited country in the world. This trophy is designed with ancient Egyptian characteristics, resembling a pharaonic temple with statues of pharaohs surrounding it, all in gold of course, with the name of King Farouk inscribed at the top.

The walls of the Royal Jewellery Museum have some magnificently painted portraits of  Khedive Ismail, his wives, sons, and daughters. All in pure golden frames. Khedive Ismail is responsible for modernizing Egypt during his rule and he was very interested in creating the best jewellery for the royal family, so he hired the most skilful Egyptian and foreign artists to create the precious jewellery collections that belonged to the royal family and the antiques that used to decorate their houses and palaces. This one of the reasons why most of the displays of the Royal Jewellery Museum date back to his ruling period.

Keep in mind that there’s an extra fee if you’re going to take pictures inside the museum, and flash photography is forbidden to preserve these rare and delicate pieces of jewellery.

Even though very little is known about the life of Princess Fatima Al Zahra’, other than she was the granddaughter of Khedive Ismail’s brother and so is a direct descendant of Muhammad Ali Pasha, this grand palace and museum certainly tell an elaborate and rich story of an entire royal family, with all its descendants, that presided over Egypt for 147 years.

They lived a life filled with luxury and opulence, but also extraordinary taste and elegance. It’s interesting to walk down these rooms and halls and explore all these numerous collections of crowns and jewels made of diamonds, crystals, gold, and many more precious stones.

If you happen to visit Alexandria, the city that is known to many as the ‘Pearl of the Mediterranean’, then you must pay a visit to this gem of a museum and take a trip back to a much different past as well as learn more about the history of the royal family of Egypt who shaped the country’s past and its future as well – visit the Royal Jewellery Museum for a new perspective on Egyptian culture.

Top 5 Places To Visit In The Pacific Northwest