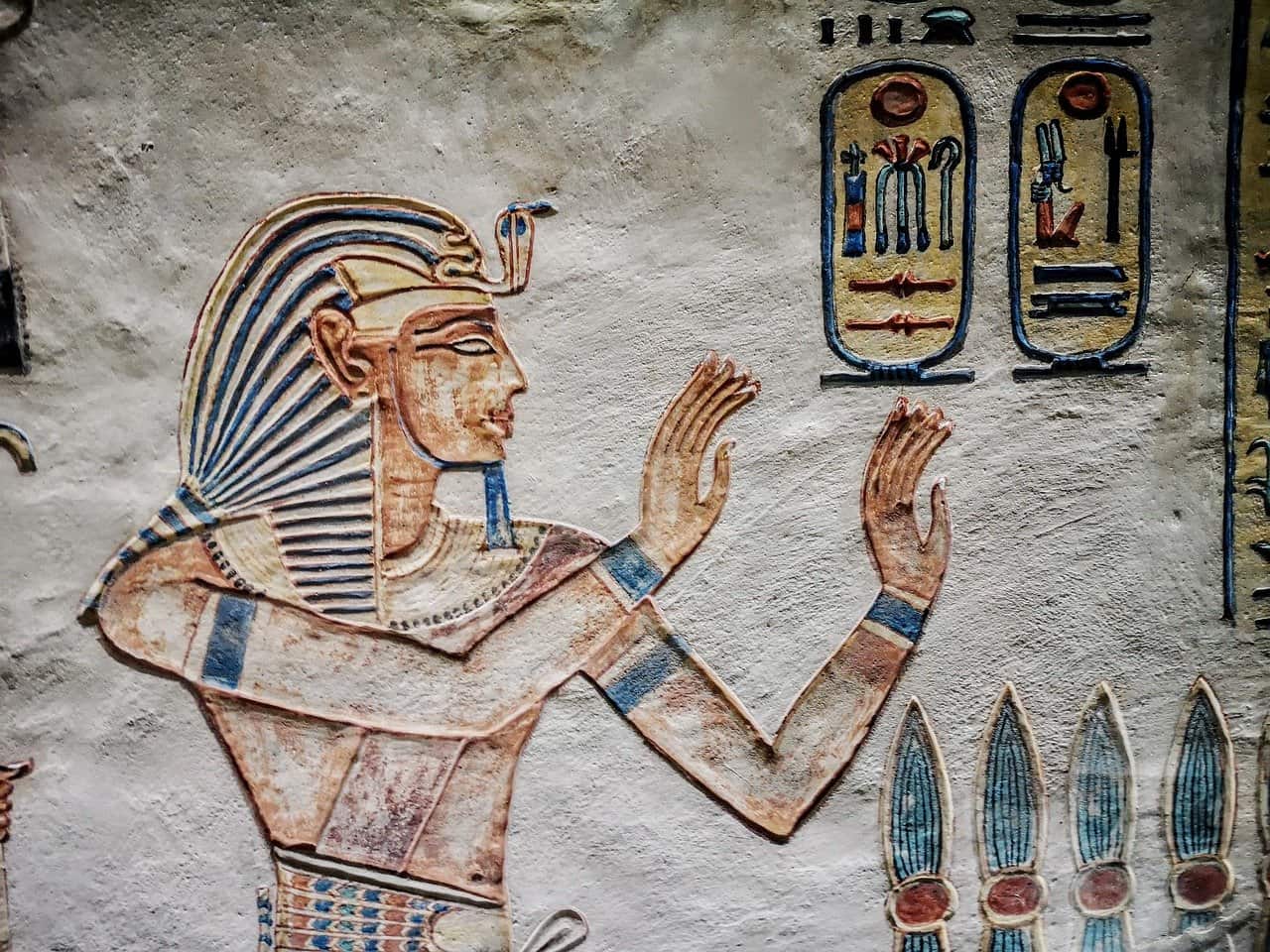 The Pharaonic Village offers a unique experience. Visiting the Village is like travelling to so many places in only one place. Every inch soaks in Egyptian history and legend. Everywhere you’ll get to explore something new about Ancient Egypt when one of the greatest civilizations once lived.

On the West bank of the Nile, the Pharaonic Village is situated on Jacob’s Island at 3 al-Bahr al-A’zam Street, about six miles from the center of Cairo. Accommodation should not be an issue since the Village is not far from most of the hotels.

The Pharaonic Village started as a concept envisaged by Dr. Hassan Ragab, the man behind the foundation of the Village. It was originally a papyrus plantation. Dr. Ragab, after years of research, reintroduced this paper plant that had been extinct for a thousand years by planting a bed of papyrus roots acquired from Sudan and Ethiopia on Jacob’s Island and, therefore, this island became a papyrus plantation once again in 1966.

Dr. Ragab’s vision was to create a detailed replica of an Ancient Egyptian community. In 1977, the dream started to come true. Implementation started to take place; a network of canals was dug overseeing scenes of ancient agricultural and rural life; waterways were made; over 5,000 trees were planted, such as weeping willows, sycamores and date palms, trees that are easily identified in tomb paintings as a typical part of the scenery, to screen the Village from the city. Not only was the scenery depicted in ancient paintings brought back to life, animals and birds depicted in wall paintings were brought back too, such as the Meidum Goose, which was thought to be extinct. The pharaonic Village was finally inaugurated in May 1984 in a semi-finished state and has become a major tourist attraction.

The Pharaonic Village is offers an entertaining and educational atmosphere. It houses unique exhibits holding artifact replicas of items that were present over 5000 years ago. These replicas are carefully manufactured using the same materials and techniques as the originals with such fine detail. There are dioramas and models with as much close detail as possible, reflecting the life in Ancient Egypt. You’ll find the following exhibits:

We’ll help you explore the authentic museums and exhibits of the Village.

This museum showcases some replicas of ancient Egyptian mummies opening the door to the secrets of the art of mummification in Ancient Egypt. You’ll also get to learn a lot about the medical achievements of Ancient Egyptians, particularly in trauma surgery, oldest prosthetics and prognosis of numerous injuries in exquisite detail.

Through the models and displays housed in this museum, explore the pharaonic daily life of Ancient Egypt, from pharaonic temples and models of kings and queens to ways of hunting, famous animals, trees and plants.

This exhibit is all about the famous Queen Cleopatra. It also showcases the history of Alexander the Great and the Ptolemies and the Battle of Actium. Moreover, it displays models of Alexandria, the ancient Library of Alexandria and the Pharos (i.e. the lighthouse), which was one of the Seven Wonders of the Ancient World. Alexandria, founded by Alexander the Great in 331 BCE, was the capital of the ancient world for 300 years and home for Cleopatra’s palace.

The Coptic Museum has a replica of the Monastery of St. Anthony, the first in the world, as well as a replica of the Monastery of Saint Catherine. Monasticism originated in Egypt, and from there it spread through the Middle East and Europe. In Alexandria emerged the Catechetical School, the first academic Christian institution from which great Christian scholars, such as Athanasius, originated.

Islam is the major religion in Egypt, and there is a huge Islamic history, culture and art. The exhibit displays different models of Islamic arts from different countries as well as the most famous mosques.

This exhibit highlights some main historic events like Napoleon’s conquest of Egypt (1798-1801), which only lasted about three years, yet its consequences to the area were spectacular. Among the events featured in this exhibit is the Battle of the Pyramids, where Napoleon defeated the Mamluks at Imbaba, 13 miles north of the Pyramids; the Battle of the Nile fought in Abu Qir Bay, 11 miles east of Alexandria, where Horatio Nelson leading the British Navy defeated the French Armada.

There is also an original-sized replica of the Rosetta Stone discovered by Pierre Bouchard in Rosetta and played a major role in deciphering hieroglyphics since it was written in both Egyptian and Greek languages. The exhibit features the role of The French Scientific Expedition brought by Napoleon, describing, drawing and cataloging all ancient Egyptian temples, antiquities, as well as the fauna and flora of the country, which was all eventually published in the 28-volume Description de l’Égypte in 1828.

The museum with its rich royal décor features 52 public figures, Khedives, Sultans, Kings, politicians, artists, etc, of modern history (1805–1952 CE) in 38 statues and more than 150 photos and portraits. Moreover, a maquette is displayed featuring important events and incidents, such as the digging of Suez Canal.

In this museum visitors explore the life, accomplishments and real belongings of Egypt’s second President Gamal Abdel Nasser and a big maquette of Aswan High Dam.

This museum features the life, accomplishments and original belongings of Egypt’s third President Anwar El Sadat, the man of war and peace who ruled Egypt as president for eleven years. There, visitors learn about his leadership in the October War of 1973, the restitution of Sinai made him an Egyptian hero, his visit to Israeli Knesset and the eventual Israel-Egypt Peace Treaty, which won him Western praise (along with Arab scorn) and changed Egypt’s image in the West positively.

The inventors museum features over 45 inventors, who participated with their technological achievements in the growth of Egypt. It displays models and pictures of their inventions.

The museum showcases the history of China, its rulers and the emergence of new China. It also shows the Chinese education, agriculture, economy and industry through models of the Chinese map, the Great Wall of China and the forbidden city.

Handmade artifacts, from gold and silver jewellery and alabaster canopic jars to the golden throne, were put too in the tomb, and they were made with great precision using the same techniques as the original ones. The manufacture of these artifacts was costly and it took years in process. The team also made sure these treasures were arranged exactly the same as were the original ones in the original tomb, with very few differences like air-conditioning.

A Day in the Pharaonic Village

The Pharaonic Village is not a collection of static and unchanging exhibits. Rather, it is a living, breathing entity that changes day by day with numerous activities from Ancient Egypt. Enjoy a whole day at the Pharaonic Village with the services offered that guarantees an enjoyable visit.

There is also room for fun for the children. They’ll enjoy their time at one of the largest urban parks in Egypt, Tut Land. Parents can relax too in the cool shade of the surrounding trees while their children play at the recreation spot.

Boat building was a major industry in Ancient Egypt since the Nile was the major traveling route. So it is also a prominent part of the Pharaonic Village, joining other ancient industries such as brickmaking, carpentry and masonry. As you learn about the life of Ancient Egypt, go on an hour-long nile cruise on one of the Nefertari Yacht tours. Tours sail from the Pharaonic Village several times a day with night cruises. Meals and snacks are available for purchase on the yacht. You can also reserve the Nefertari yacht for your special events (birthday parties, engagement and wedding ceremonies or any group outing).

After a long day around the Pharaonic Village, you’d probably be hungry and need to enjoy a hot meal and some refreshments. The village has a number of cafeterias throughout that offer quick service of food and soft drinks. Try King Tut Restaurant at the Pharaonic Village. It is open for lunch and dinner.

There are several souvenir and gift shops in the Pharaonic Village for buying mementos on your visit. They sell handmade stuff, from jewellery, papyri paintings to replicas of King Tutankhamun’s treasures, manufactured by the same expert artisans who crafted many of the artifacts displayed in the exhibits of the Village.

To top off this educational and entertaining experience, The Pharaonic Village offers entertaining shows hosted by The Happiness Team every Sunday, Monday and Wednesday, as well as a Tanoura show or a Puppet show on Fridays till the end of November.

Remember to take a photograph in Cleopatra’s royal clothes, an Arab Sheikh’s or an Egyptian countryside girl’s at Cleopatra’s Studio. There is also a variety of backgrounds for your photo, you can choose whatever background you want.

The Pharaonic Village has an art center, Tut Art Center, for children to learn the art of pottery, painting on papyrus, making papyrus boats, sculpting, making accessories and other handicrafts. Ancient Egyptians are known for excelling in art. The team of artisans at the Pharaonic Village created exact art pieces using the same ancient styles and techniques, ensuring a high level of realism and contributing to the authenticity of the Village.

Enter the Tomb at your own risk and solve the Riddles and Puzzles to escape the Tomb before time runs out!

The Pharaonic Village has a petting zoo for children to have fun and play with animals under the supervision of a trained guard to show your children how to hold and feed the animals. Among the animals are sea turtles, cats, rabbits, birds, horses, sheep, monkeys and ducks. Visitors can hold the animals, feed them and take photos with them.

The Pharaonic Village hosts special events and parties with the ancient Egyptian spirit like Ancient Egyptian Weddings on the island of tranquility on the Nile west bank, overseeing the river flowing and the soft breeze blowing through the treetops of the Botanical Gardens. The Village offers a beautiful wedding venue with one of the most gracious service. The bride and groom can dress in Pharaonic costumes and even their guests too for a Pharaonic-themed wedding. It also organizes birthday parties for children with the coordination of an on-site expert.

1- The Pharaonic Village recently hosted a color festival (for girls only) where they enjoyed live music, dancing and color throwing.

Not only does the Pharaonic Village play an important role in enriching our knowledge of the ancient Egyptian life, but it also contributes in the development of the Egyptian society through charity work in areas like Saqiyet Mekki and Geziret el-Dahab. It has spent more than 2 million Egyptian pounds on charity work since 1997.

Visitors can take one-to-three-and-a-half-hour guided tours around the village depending on what you wish to visit.

The fee for the trip varies depending on the program of your choice.

Museums in the Pharaonic Village:

El Andalus Park: Sustainable Greenery and Heritage between the Edges of the Nile