Montaza Palace and its Spacious Gardens 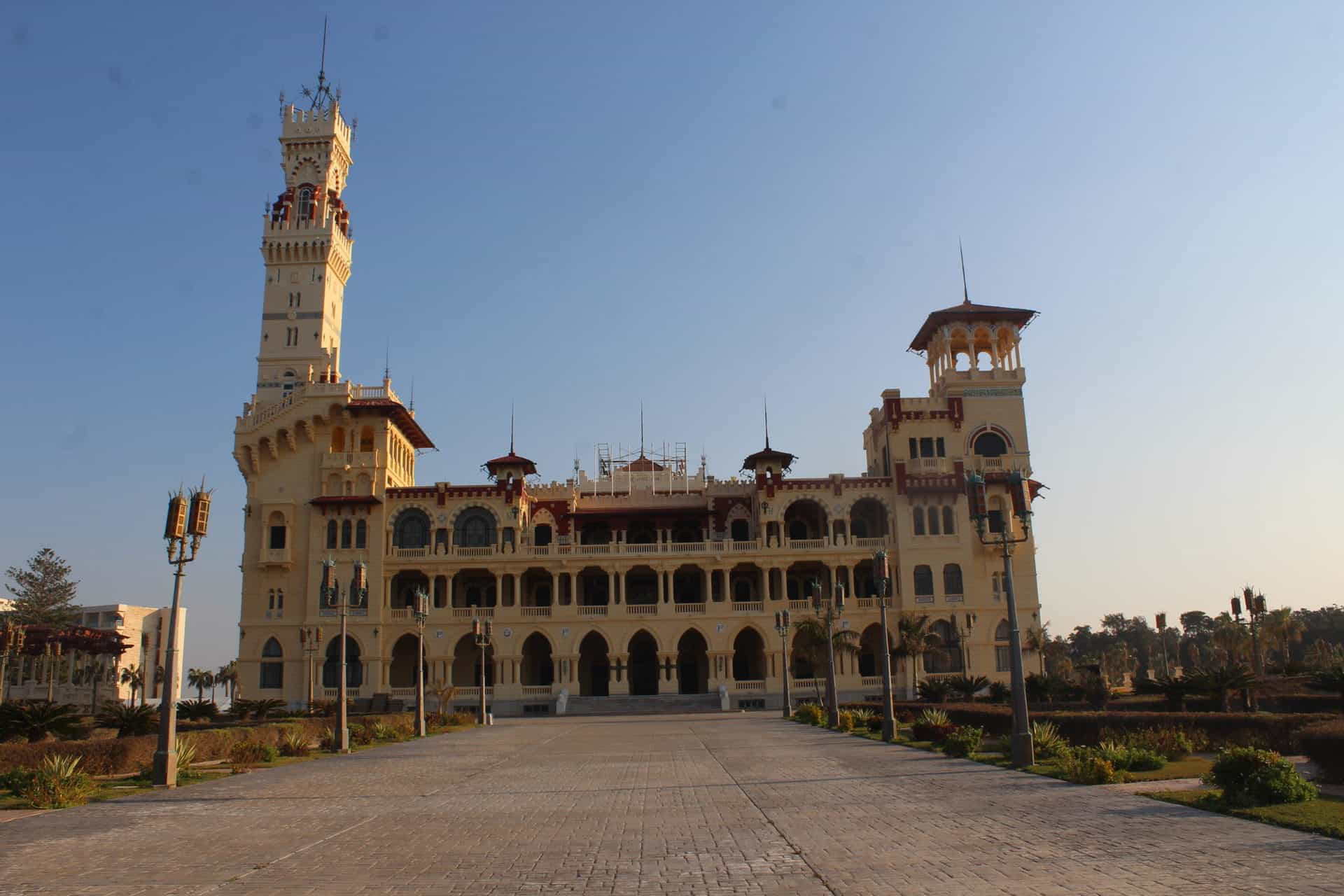 The spacious Montaza Palace and the gardens that surround it have been a haven to the people of Alexandria for decades, where they can spend their leisure time with their families during holidays or weekends. They can stroll around the park, have picnics or visit the children’s play area to allow their kids to run around freely and enjoy the amazing sun which characterizes Egypt’s weather all year round.

What does Montaza Mean?

LocaMonataza literally means “park” in Arabic, which is quite suitable. It is also said that the name Montaza was suggested by the head of the government’s Turkish Diwan, Mahmoud Shukry Pasha.

ted at the north east end of the city, the Montaza carries the name of the district surrounding it. It is the largest district in Alexandria with over a million living there.

The history of the district and its popularity stems from the very important landmark that marks the area. The Montaza Palace, which you can see immediately as soon as you arrive in the district through El Corniche Road, was built in 1932 by King Fouad I of Egypt. Before that, there was a hunting lodge, Salamlik that was constructed in 1892 by Khedive Abbas II.

A court chronicler, Ahmed Shafik Pasha, said that the decision to build the Montaza Palace came about in the 19th century during a moonlight trip by Khedive Abbas Hilmi, whose mother’s palace, Saray al-Ramleh, was situated along the eastern border of the city and beyond that point, there was only sandy hills and beaches.

In 1892, Abbas Helmy II, used to ride his horses and donkeys on the shores of Alexandria with his friends. Once, he ordered his men to prepare 80 donkeys for his ride along with the Khedive Music band. In Sidi Bisher, several Bedouins heard the music and realized that the Khedive was coming.

His friend, Shafik Pasha said, “With him on this particular moonlight escapade was his secretary Rolier Bey, Ali Shaheen Bey from Protocol and myself, along with a 40-pax retinue including a musical band. As we continued eastwards we ran into what must have been an old fortification from the Mohammed Ali days with a few rusty cannons still in evidence.”

Seeing the potential of the area, Khedive Abbas decided to build a summer palace on the plot of land that only had a small wooden hut owned by the wealthy Alexandrian Monsieur Augustino Sinadino, whereas the entire plot of land belonged to the Coastguard Department.

Two canons were found, dating back to the reign of Mohamed Ali, that were used to protect the North Coast of Egypt and the city of Alexandria. They are still situated in the same spot today right infront of where the Salamlik Palace was built.

Wanting to expand the area even further, Khedive Helmy II also bought the house of Sinadino, a rich Alexandrian tradesman in addition to a lot of lands from people living in the area. The gardens were added to the surroundings of the Montaza Palace later on. It was used by the Egyptian Royal Family as a summer palace and was, of course, closed off from any public access.

The royal family continued taking care of the Montaza Palace and estate until the reign of the last king of Egypt, Farouk I. Then, the Egyptian revolution of 1952 broke out in the country, overthrowing the monarchy and seizing all of their assets, including the Montaza Palace and the Salamlek Palace was transformed into a museum until it was added to the presidential palaces which serve as a hosting place for the president’s visitors. The gardens, however, were opened to the public since then. Now, you can pay EGP 25 to enter the park and enjoy your day in the sun.

The Salamlik was designed by the court engineer Fabricius Bey and constructed in 1892. Afterwards, during the reign of King Fouad I, the Haramlik (or the Montaza Palace) was added, becoming a world-renowned cultural landmark.

The Montaza Palace was designed as a mixture of Ottoman and Florentine architectural styles, with two towers. The letter ‘F’ is inscribed on the Palace walls as an ode to its owners: King Fouad and his son and heir King Farouk, whose wife’s name ‘Farida’ also started with an ‘F’.

The Montaza garden also contains a large selection of tropical trees and plants, some of which are quite rare, more than 75 years old.

Other notable landmarks in the Montaza gardens are the old clock tower and two hotels: Helnan Palestine and Salamlek Palace. The Sheraton Montazah is located outside the park, but is actually right across from it.

What to do in Montaza

Have a Picnic or Venture into the Sea

All sorts of water activities are available to visitors of Montaza. You can go on a ride in a boat or go waterskiing, diving, snorkeling, or even just chill out on the beach.

You can also bring your barbecue gear along and have a great time on a family picnic or with your friends anywhere in the vast gardens.

So, if you’re looking for a place to stay within the Montaza park that will offer you a panoramic view of the Mediterranean and the spacious gardens all in the same time, then look no further than Helnan Palestine Hotel.

The five-star Helnan Palestine hotel faces one of the most famous historical landmarks in Alexandria, the Montaza Palace, and has its own private beach for its guests to enjoy.

The Zanilli’s Café, located right on the beach by the Montaza Bridge, is a huge crowd drawer, especially in the summer months when the weather is fantastic. You can have a seat right by the shore of the Mediterranean and have a hot meal or a warm drink with your friends and family.

Every historical landmark has its own mysteries and hidden secrets. In 2015, it was announced that a secret chamber ws been discovered under Montaza Palace’s gardens. The announcement was made by the Egyptian Minister of Antiquities, at the time, Mamdouh al-Damaty.

Gardeners working on the palace’s gardens discovered a crypt dating back to WWI or WWII. The crypt could have been used as an underground prison as it featured iron bars and several holding cells.

We can’t imagine what else could be found, if archaeologists were able to ‘dig a little deeper’.

Overall the Montaza Palace and gardens are a must-visit, if you’ve ever in the city of Alexandria. Moreover, if you’re looking for similar cities with scenic views and an ancient history, then go no further than the city of Rosetta, about an hour’s drive away.

Rosetta: The Egyptian City Known around the World