Top 10 Diverse Things to Do in Alexandria 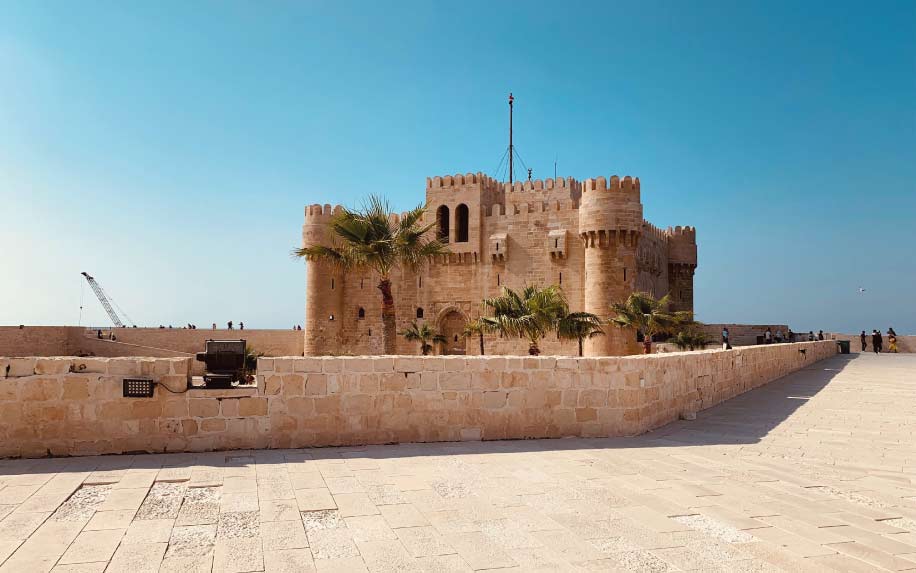 The city of Alexandria, Egypt, has a diverse and long history due to the mix of cultures that all lived together in harmony on the coast of the Mediterranean.

This history has left its mark on the beautiful city that has been dubbed ‘The Pearl of the Mediterranean’. As you walk through its streets, you’ll find an interesting mix of history and modernity. There, you can go from visiting an ancient Roman monument to an ancient Egyptian site, and then head for a modern mall complex to hit the shops and explore their different stores.

Alexandria managed to create a harmonious mixture between its past and its present, making the modern city a must-visit for all tourists who want to explore Egypt.

Here are some of the diverse things you can do while on a visit to the city of Alexandria.

This area is so unique that it is considered one of the Seven Wonders of the Middle Ages. It contains several tombs and antiquities dating back to the pharaonic era, with infusions and influences from the Hellenistic and Roman eras as well.

A circular staircase leads down to the tombs where you’ll find a burial chamber dating back to the 2nd century to the 4th century, before being rediscovered in 1900 when a donkey accidentally fell into the access shaft.

In 2019, the area reopened after the rising water levels were prevented from destroying the endangered tombs. Now, you can enjoy the marvellous location and the vivid inscriptions decorating its walls.

Next to the Catacombs, you’ll find another must-see location. Pompey’s Pillar was built in c. 300 AD in honour of the Roman emperor Diocletian, who provided food for the besieged city of Alexandria at the time.

The Serapeum was dedicated to Serapis, Alexandria’s patron god. It is said that it was destroyed around 400 AD when Christianity spread in Alexandria and many symbols of paganism were demolished. However, there are remains of underground storerooms where texts and manuscripts from the Great Library of Alexandria were kept.

It’s one of the most famous destinations in Egypt.

One of the popular streets in Alexandria is Fouad Street. Although it is one of the oldest streets in the city, it has still maintained its luster and attracts many people daily to its numerous restaurants, cineplexes, and shops.

Back in the day, during the reign of Kings and Queens of Egypt, one of which the street was named after, Egyptian, Italian, Greek, French, and Armenian communities lived side by side in the area and you’ll find that reflected in the signs of some of the older shops on the street that have kept them for decades. The architecture, art, shops, and delicious food were a unique melting pot of all the diverse communities, all of whom considered themselves Alexandrian first and foremost.

While we’re on the subject of food, when one visits Alexandria, one must sample the many delicious types of food this city has to offer. From traditional plates of beans and pickles at Mohamed Ahmed in Raml Station to posh desserts at Délices, you’ll find everything your heart desires.

Alexandria is known for its cafés and patisseries, some of which date back over 100 years, like Trianon or Délices, which is still owned by the same Greek family since 1922.

A perfect way to go sightseeing in Alexandria is by riding the tram. Tram stations are available all over the city and can take you from the east to the west quite easily.

The Alexandrian tram has been in operation since 1860 and is considered one of the oldest tram systems in the world. It’s also the perfect way to start your urban adventure in Egypt.

While the tram cars have been refurbished and new cars have been imported that are more convenient for riders and offer modern conveniences like Wi-Fi, the old tram cars are still available and in operation. Overall, it’s a very cheap and affordable way to explore the city.

Have a Drink at the Windsor Palace Rooftop Restaurant

The Windsor Palace Hotel was established in 1906. It is close to Raml Station as well as the shopping district nearby.

The view from their rooftop restaurant and terrace is quite stunning, especially at sunset. There is a restaurant on the 6th floor and a Sky Roof on the 7th that doubles as a club at night. The restaurant offers a diverse menu with everything from traditional food to Italian and much more, so you’ll have plenty to choose from.

Dive among the Underwater Artefacts

One of the well-known activities in Alexandria is going on underwater excursions to explore the submerged museums lying at the bottom of the Mediterranean. A noteworthy site is the Cleopatra Palace which was once part of the ancient city of Alexandria. Northeast of the city, in the bay of Aboukir, you’ll find the port city of Heracleion-Thonis. You will be accompanied by a professional diver on your trip underwater.

Not only is the area known for the significant events that it witnessed, but it also offers some of Egypt’s finest seafood, with a multitude of seafood restaurants that locals and tourists flock to.

Attend a Concert at the Alexandria Opera House

Alexandria Opera House or the Sayed Darwish Theatre located in Fouad Street was built in 1921 by the French architect Georges Park. Its beautiful architectural design was inspired by the Operas in Vienna and Paris. Numerous concerts and opera performances are held there every year which makes it perfect for a night out where you can enjoy beautiful music and cultural performances.

A great way to explore the city of Alexandria is to ride the double-decked Red Tourist Bus, which takes you all over the city from east to west by the corniche, giving you a great view of the Mediterranean in the process. The buses usually go from Maamoura Beach to the east of the city all the way to the Qaitbay Citadel in the west, and you can get off the bus whenever you wish to explore more landmarks, such as Stanley Bridge, Gleem Bay, and Montazah Park, among many others.

Relax by the Beach

Alexandria is known for its fantastic beaches. After the North Coast of Egypt, Alexandria is the number one city that locals and tourists head for in the summer to take a break from the heat and enjoy the warm sunshine, golden sand, and beautiful beachfront.

There are plenty of beaches all over Alexandria, ranging in prices, but are all affordable and budget-friendly. Now, you can also book your beach entry, umbrella, and chairs online through the city’s online portal.

Relaxing by the beach in Alexandria is a must for anyone visiting the city in order to experience Alexandria at its best and take a breath after all the activities you’ve done across the city so far.

We recommend Stanly Beach for its clear and sparkling water and the many restaurants nearby that provide beachgoers with delicious meals. After that, you can walk up to Stanly Bridge and enjoy the amazing view of the sea and the city of Alexandria from above. The Bridge was modelled after the Montaza Palace, a grand feat of architecture in and of itself.

How to Get to Alexandria

If you arrive in Egypt through Cairo International Airport, then the best way to reach Alexandria is by train from the Ramses Train Station in downtown Cairo. Trains depart for Alexandria every hour or so, and you can book your ticket online ahead of time to be sure.

Within Alexandria, there are several public transit options, including the tram, as we’ve mentioned before, as well as public buses, but if you’re into the more scenic route, then definitely pick the Tourist Bus. However, since it might not take you everywhere you need since it sticks to the corniche road, then we recommend you hop in a taxi or take an Uber which offers different car choices depending on price. A similar company to Uber is Careem, which operates in Egypt, and has the motorcycle option, where a driver can pick you up on a bike.

Where to Stay in Alexandria

Alexandria has plenty of hotels to suit all needs, whether budget or luxury hotels, all overlooking the Mediterranean Sea. You’ll find many great budget hotels on the corniche road that wraps around the city’s coast, such as El Haram and Makka Hotels near the Ibrahimya Area.

For a more luxurious and pricier option, you can head for the Four Seasons in San Stefano or the Helnan Palestine Hotel, or the Sheraton in Montaza.

Find out more about planning a trip to Egypt.

10 Things to Do in Suez City