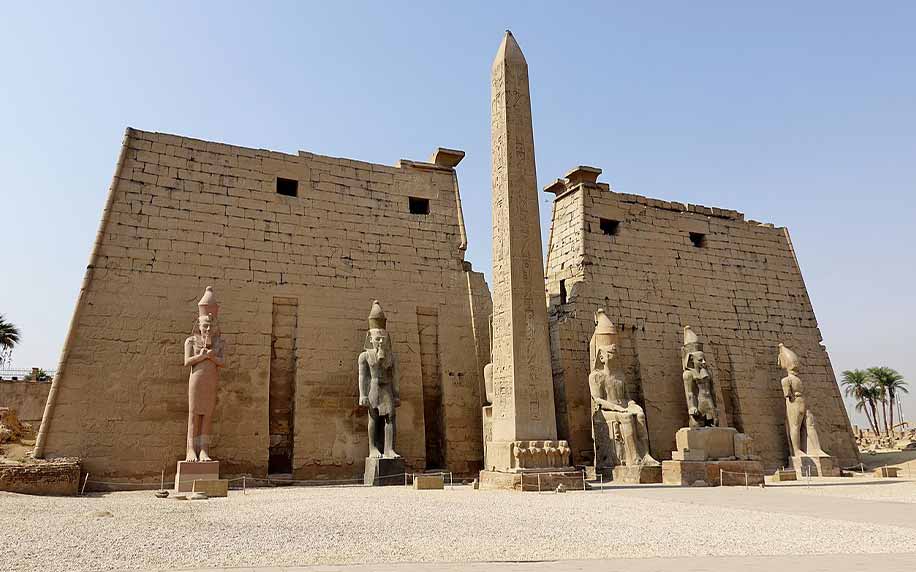 Luxor Temple is in one of the most famous cities in Egypt, as it contains most of the ancient relics in the country, spread all over the city, and it is located in southern Egypt on the east bank of the River Nile. Luxor was the place where ancient Thebes was located, which was built around 1400 BC.

It was known as the great city of the Middle Kingdom and the New Kingdom in ancient Egypt and most of the ancient Egyptian tombs and temples were built in this beautiful city. The city is known as an open-air museum, where there are important temples, such as the temples of Karnak and Luxor. All over the city, you will see the monuments, temples, and tombs of the west bank which contain the Valley of the Kings and Valley of the Queens.

One of the most well-known temples in the city is, of course, the temple of Luxor. So pack your bags and let us go for a little journey to southern Egypt, to this magnificent temple that has stood tall for thousands of years.

The Construction of Luxor Temple

The Luxor Temple is a great sign of Ancient Egyptian civilization. It was built with sandstone blocks from Nubia, and it is surrounded by mud-brick walls which designate the separation between the world and the sacred realm of the gods. The temple was built in the New Kingdom era and it shows many of the features typical of temple construction known during this period.

The temple was built in dedication to the renewal of kingship, and many ancient Egyptian kings were crowned at the temple and it is also said that Alexander the Great was crowned at the temple, although he never travelled to southern Egypt. The temple is also known as ipet resyt and that means the southern sanctuary and the temple’s main use came in at the annual Opet festivals, where the statues of Amun, Mut, and Khonsu were moved from Karnak, along the Avenue of Sphinxes to be reunited during the inundation at the temple.

At the entrance of the temple, you will see the monumental pylon built by Ramses II. It is about 65 meters long and on it, there are boasted bas reliefs that showcase the military campaign of Ramses II against the Hittites. In front of the entrance, there were two obelisks of Ramses II, 25 meters high, and one of them was moved to France in 1833 to be placed in the centre of the Place de la Concorde.

Around the entrance of the temple, there are two statues that were made of red granite, 15.50 meters high, that present the Pharaoh sitting on his throne, and then you will enter the great Court of Rameses II which is decorated with a double row of columns with statues of Osiris in the intercolumns. Then comes the court of Amenophis III that is surrounded on three sides by a double row of papyri-shaped columns.

The exterior of the temple and its wall are adorned with scenes of religious ceremonies.

The temple consists of a large colonnade with fourteen papyriform columns, 19 meters high, engaged on the east and west by a wall with decorations describing the Opet festival and it was finished in the era of Tutankhamun. When you enter, you will see the courtyard that is closed by a double row of columns which is demarcated to the south by the hypostyle hall, then from there you can enter the inner part of the temple which contains four antechambers and there are also other rooms like the sanctuary of the sacred boat.

The Function of the Luxor Temple in Ancient Egypt

According to ancient Egyptian beliefs, the feast of Opet celebrated the divine rebirth of the pharaoh son of Amun, and was held to emphasize his power. In the divine birth room, Amun assumed the appearance of the pharaoh to meet the queen to whom Tot, the god with the head of an ibis has predicted her future destiny as a mother.

The queen gave birth to her godly son with the help of Hathor, Isis, and Nephthys who is the son of the king of the gods and was known as the father Amun. He presented incense offerings and fresh flowers to Amun and received in return the divine nature, youth, and promises of long life, and thus, the Pharaoh, reconfirmed in his royal role, could secure prosperity for his people for another year.

The Mosque of Abu’l Haggag at Luxor Temple

This mosque is located just inside the Luxor Temple, and it has a history of a thousand years. It is a symbol of how this temple combines the three different religions, ancient Egyptian religion, Christianity (through several Roman inscriptions), and Islam. Sheikh Yusuf Abu el Haggag was born in 1150 in Baghdad and he was a holy man. He moved to Mecca in Saudi Arabia and then came to Egypt where he settled down in Luxor.

The history of the temple shows us how different religions were practised at different times at the same location, as the Pharos prayed in the temple for the gods of Egypt, as Muslims prayed in the mosque, and Christians attended mass in a chapel at the end of the temple. When you enter the mosque you will see that it has three arches, each one is 12 meters high and covered with marble and faience.

This road is flagged with stone tiles and lined with 34 statues on both sides in the form of the Sphinx, and this statue represents King Nectanebo the first ruler of the Thirtieth Dynasty. The road will lead you to the temple of the god Khonsu which is located south of the Karnak temple and this road replaced the road of rams that dates back to the time when King Amenhotep III was in power. There, you will also see the statue of the Sphinx carved from a single block of sandstone, embodying a lion with the head of King Nectanbu.

The Right West Wing of the Luxor Temple

The Left East Wing of the Luxor Temple

In this wing, you will see inscriptions of King Ramses II featured riding his war chariot, the Hittite enemies throwing a barrage of arrows, and the ground is covered with dead and wounded, as for the living, they flee frightened and leave Kadesh. In the north of the wing, you will see the bas-reliefs of a scene of Prince Kadesh depicting him frightened in his chariot and you will see that in a full description of this battle written in the ancient Egyptian language.

The edifice was preceded and its backs to its wall were six huge statues of King Ramses II, four standing, two on each side and only one is still standing, and there are also two large statues on either side of the entrance representing King Ramses II sitting on his throne. You will also see on the walls of this wing the union of the two countries, and on the side of the throne, a small statue of Queen Nefertari on the left side of the eastern statue and the princess statue on the right side of the western statue.

You can find it in the northwest corner of the courtyard of Ramses II, it was built by Hatshepsut and Tuthmosis III and some stories say that Ramses II was the one who built it with stones that he took from the shrines of Hatshepsut and Tuthmosis III. There are three chapels, where the middle compartment is dedicated to the sacred boat of the god Amun Ra, the western compartment for the sacred boat of his wife, the goddess Mut, and the eastern one for the sacred boat of the son of the god Khonsu, the god of the moon. All three chapels represent the release of incense, purification, the offering of fat, and the sacrifice to the sacred complex of the god who owns this chapel.

The Palace of Prince Naguib Hassan Abdallah: The Last Mamluk Prince in Egypt