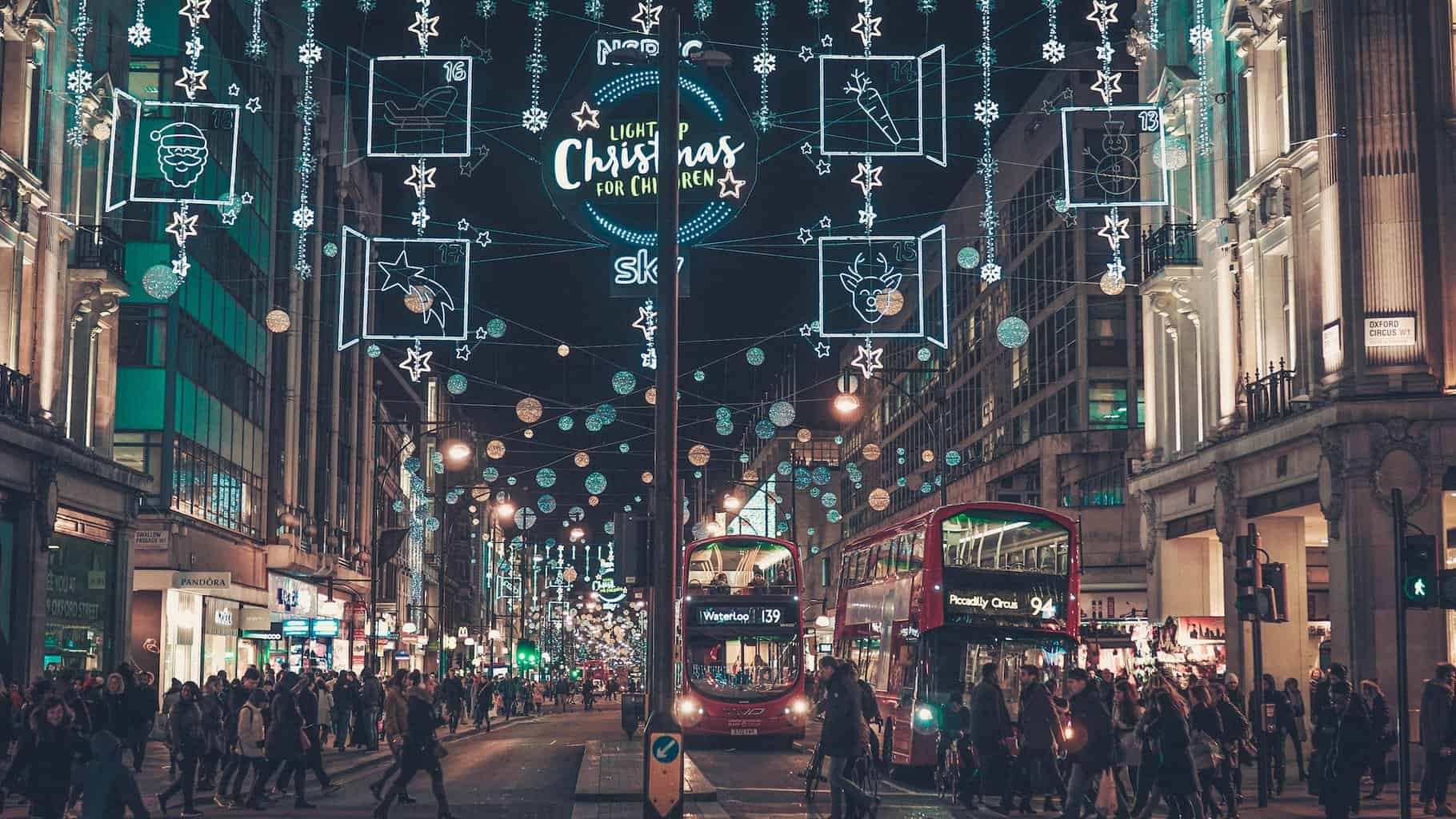 Christmas is just around the corner, and that magical festive spirit is in the air, especially in the Old Smoke city, London with its famous London Christmas Lights! During this time of the year, the capital’s streets turn into a real Christmas miracle.

It is worth noting that it was here that the first street light decorations appeared in 1954.

Every year, the street is decorated with huge light installations in the form of angels, symbolising the spirit of Christmas. The huge figures with wings and plumes soar over the street and sparkle with their more than 300,000 lights! And it’s probably one of the biggest illuminations ever.

In addition to the stunning decorations and pre-holiday shopping, Regent Street delights visitors with a variety of surprise performances, which are not specified in the programme of events and can be located anywhere on this street.

It’s just a ten-minute walk from Regent Street to Trafalgar Square. In early December, the country’s main Christmas tree is set up in a tradition dating back to 1947.

It has been sent from Norway for more than half a century, a Norwegian way of thanking the British for their help during World War II. The present four-tonne tree, 25 metres tall, reaches almost halfway up the monument to Nelson’s Column.

You can also get a glimpse from above by reserving a table on the rooftop of the Trafalgar St James Hotel. The Rooftop at St James has a view worthy of the cover of a tourist guide. There is live music, but the view can be enjoyed for a maximum of an hour and a half, though.

A little upscale is to be found at the nearby Corinthia Hotel. There is a huge fir tree in the centre of the lobby, a million little Christmas trees covered with red-gold balls, wreaths and garlands, a grand piano, live music, candles and a winter terrace with a fireplace and alpaca blankets.

“Choose Love in Carnaby!” – neon banners over Carnaby Street in Soho is a must stop at any tour of London Christmas Lights.

Visitors to Carnaby Street are in for an incredible and unusual spectacle. Walking down Carnaby Street, you enter an underwater kingdom of whales and octopuses, rippling seaweed and crabs lurking above you. The slogan of these installations is: “One Ocean, One Planet”.

All these colourful elements are made from recyclable materials. And once dismantled, these installations will also be sent for recycling.

At Carnaby Street, as at some other Christmas locations, there are so-called ‘donation points’. All proceeds from donations will go to ocean conservation. Carnaby Street is one of the best places to enjoy the London Christmas Lights!

Covent Garden and Soho are linked by a labyrinth of seven atmospheric streets framed by picture postcard houses. It’s a shopper’s paradise in independent shops, and also a photographer’s paradise. The enormous wreath around Seven Dials alone is worth it!

Seven Dials is a unique star-shaped neighbourhood that hasn’t changed since the 1690s. The centre of the quarter is a round square to which seven roads converge (although in the first drawings, the roads were six).

The square has a high column in the middle – a sundial. There are six dials on the column because it was designed at a stage when there were still six streets, and a seventh street was added at the very end.

The central part of the block is decorated with illumination in the form of many stars. It is just breathtaking!

There is also a “donation point” at the location, which creates real magic in the truest sense of the word. The moment a donation is made, all the stars on the square begin to twinkle, and the money donated helps a lot of people in need.

There is traditionally a Christmas fair, shops and cafés for visitors to Seven Dials. The Seven Dials is one of the best spots to catch the London Christmas lights.

Somerset House, one of the world’s most visited art museums, is a stone’s throw away from Trafalgar Square. Somerset House, a former royal residence, was built in the 16th century. It delights Londoners not only with exhibitions but also with a beautiful ice rink.

With some dazzling lights around you, skate your way into the festive season against the backdrop of a gigantic 12-metre Christmas tree that just will make don’t want to leave!

With music and everything, this is one of the best locations to have a blast while enjoying magnificent London Christmas lights!

Five minutes from Somerset House, you’re in Covent Garden, offering a wonderful Christmas atmosphere. Covent Garden is another excellent stop on a journey through the festive centre of London. The square is adorned with an 18-metre Christmas tree decorated with 30,000 lights. And the entire Covent Garden area is lit by over 115,000 more lights.

As well as the central Christmas tree, there are also eight smaller Christmas trees in the square, each decorated by one of the most famous brands represented here.

But Christmas doesn’t just live in the heart of London. The traditional Kingston Christmas Market in southwest London gets fully immersed in the festive ambience, too. The entire ancient square and ‘alpine village’ is steeped in the Christmas spirit, and the local Christmas tree is decorated with fairy lights.

The wooden pavilions from around mid-November to almost the end of December are happy to offer a huge range of original handmade gifts. The cafés and bars offer a variety of traditional drinks and food from around the world.

There’s a great number of concerts by fine musicians get held there. And for the little ones, there are several treats from carousels to Christmas carol singers and much more fun stuff. No tour of the glorious London Christmas lights would be complete without a visit to Kingston Christmas Market!

The Royal Botanic Gardens at Kew are just a must-visit around the festive season. At 132 hectares, it’s one of the world’s largest collections of living plants and one of the largest herbarium in the world. There are numerous architectural sights here as well. At Christmas time, the garden looks like a fairytale forest lit by more than 1 000 000 (!!!) light bulbs, yes, you read that right, more than a million lights!

There’s an alley of trees that are literally shrouded in glowing garlands with little bulbs called pea lights. There’s an alley where the trees are decorated with garlands of pink glow and bulbs in the shape of flowers.

It’s as if the garden has blossomed in winter. Some of the avenues are illuminated with multi-coloured spotlights. While there, we guarantee, you will take some memorable photos at the lit-up tunnel of 20 arches.

The culmination of this Christmas wonder is a laser show displayed against the façade of the stunningly beautiful, unique and sheer size of the glass Palm House, built between 1844-1848.

Hampton Court Rinks, Ally-Pally and others

For those looking for an adventure on ice, there’s plenty of room to enjoy it in the rink at Hampton Court, the historic residence of Henry VIII. A ticket (booked in advance) entitles you to a 45-minute skate overlooking the Thames and the majestic Tudor Castle.

Baked Camembert, hot chocolate, the cafe-bar menu doesn’t flash much variety, but for a family day outdoors, the place should continue to operate as a takeaway.

There’s another Christmas skating rink at the magnificent Queens House in Greenwich Park until January, so you’ve got time to pack up.

The much-loved Alexandra Palace, “people’s palace”/ Ally Pally, also boasts an ice rink, which is conveniently accessible to North Londoners. It has quaint Victorian architecture: Ally Pally was the northern answer to East London’s Crystal Palace. You can warm up after the ride in the quaint pubs of nearby Highgate.

Residents of East London also got a great slice of Christmas cake, namely a merry-go-round at the Tobacco Docks complex. At the dock, you will find New Year cinema with an enchanted forest entrance, an alpine hut with strong cocktails and fur capes, and dinner in transparent igloos overlooking neighbouring rooftops and skyscrapers – it’s all on the schedule.

West London – From Mayfair to Chelsea

London’s richest neighbourhoods look as good as a brand-new Rolex at Christmas. Everywhere you look, there are flashy shopfronts, glittering lights and partying. If you live in a different part of London, you can still enjoy a nice walk here with a bottle of champagne, a flask of whisky, or even a thermos of mulled wine.

In Mayfair, beauty is sprinkled throughout the streets, nooks and crannies – from the lights in Bond Street where Cartier’s gift bow wrapped window alone will leave you breathless to the light bacchanalia of Oxford Street; don’t miss Selfridges’ shop windows, that’s a separate art form and marketing!

Stop by the light tunnel in Grosvenor Square for great photos or outside Evgeny Chichvarkin’s Hedonism Wines, which is decorated with a heap of Christmas trees. Or maybe go to buy a bottle of wine, if you feel like it.

If you pass through Berkeley Square, play around with the neon mermaid in a Christmas cap (in the window of Sexy Fish) or pose languidly in front of London’s most pompous private club, Annabel’s.

From Berkeley Square, stroll down Mount Street: there’s the cosy Connaught Hotel, Scott’s fish restaurant with its richly photogenic terrace, and the rival to it in splendour, the enclosed George Restaurant and Club.

Just a few steps away, on South Audley Street, is 34 Mayfair Restaurant. This restaurant seems to have acquired a year’s supply of Christmas balloons. The balloons cover every inch of the ceiling and walls – the photos will be just PERFECT!

The main thing is not to smash anything. Due to new restrictions, you may have to limit yourself to the Christmas trees at the entrance and a couple of shots through the window – oh, the times!

At the world-famous Claridge’s Hotel, the main attraction of the season is an unusual designer Christmas tree. Over the past years, Christian Louboutin, Diane von Furstenberg, Karl Lagerfeld, Christopher Bailey, Domenico Dolce and Stefano Gabbana, Alber Elbaz and John Galliano have decorated the hotel lobby.

Now we come to another must-visit London Christmas Light, Harrods! Posing at Harrods New Year’s Eve is one of the most famous spots, but the feeling is not so good in the hustle and bustle. However, walking around the hidden cluster of Eccleston Yard on the border of Knightsbridge and Belgravia is another matter.

The atmospheric boutiques, Barry’s sports club, art installations, and Christmas market are all here. Nearby is locals’ favourite, Motcomb Street, lit up in festive glory.

From Knightsbridge, it’s worth a stroll along Sloane Street to Sloane Square, romantically entwined with illuminated lights. Next to the square, Pavilion Road is a relatively new place for Christmas shopping and fun, with some very stylish shops opening: a wine shop, a cheese shop, and a coffee shop.

While you’re in Chelsea, take a photo at dusk at London’s prettiest bridge, the Albert Bridge, which looks pretty darn festive in the evening light. If you don’t make it to the Ivy Chelsea Gardens – you won’t get inside, but you will be impressed with the beauty created by the Ivy decorators.

Standing out on the list of Christmas spots is the Churchill Arms pub on the road from Kensington to Notting Hill. If you’re going Christmas shopping on Portobello Road, make your way across Kensington Church Street.

Exactly how many Christmas trees go into decorating the front of this pub is not known; they say around 8,000. Try to count after a second mulled wine grab from Portobello Road.