Close X
Home/European Region/Exploring Tampere: The 7 Best Things To Do In The City

Exploring Tampere: The 7 Best Things To Do In The City 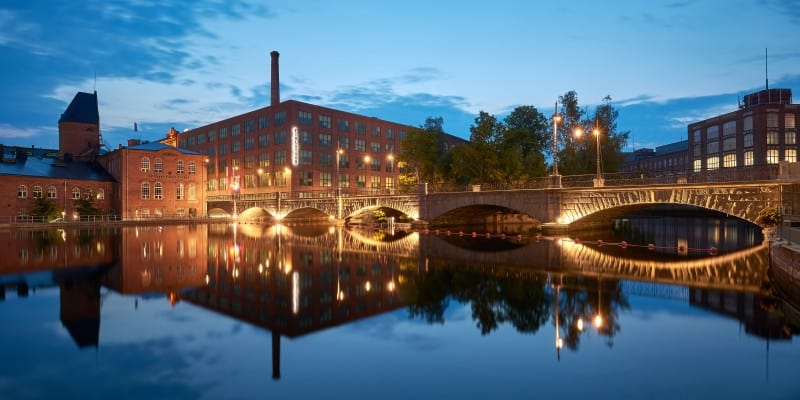 About 176 km northwest of Helsinki lies one of Finland’s most beautiful cities, Tampere. The third-largest city in the country has retained much of its old industrial charm.

Tampere, AKA “The Manchester of Finland,” was the cradle of Finnish industrialization; today, it is rather the “gateway” to the land of reindeer.

Tampere can quickly grow on you. It is not only the rough working-class city with the many smokestacks one and a half hours north of Helsinki, but also Finland’s second-largest city, where art, theater, and good coffee are valued.

With so much that the city has to offer, here are the 10 best things to do in Tampere.

Koskipuisto: One of the Best Places in Tampere

A visit to Koskipuisto in the middle of Tampere is a must in the summer, especially for couples in love! On the Patosilta Bridge, which runs above the hydroelectric power plant, people from all over the world express their love by leaving a lock with their name on it on the bridge.

Why not surprise your partner with a lock with your name on it and leave it in Tampere when you visit! Afterward, grab a sandwich and a cider and mingle with the people in the park!

Many would argue that Tampere is the capital of quirky, unusual museums, and it is easy to see why. The city has some peculiarly interesting museums that you absolutely don’t want to miss!

Just below the Finlayson factory site is the world’s first spy museum, with an extensive collection of spy equipment and stories from around the world, especially from the Cold War.

In the museum, you can discover information about spies from Finland and all over the world, along with gadgets reminiscent of James Bond movies. Cool, right?

One of the really fun things to do in Tampere is going to the Spy Museum and taking the “Aptitude Test for KGB Cadet School,” you even get a diploma afterward!

The small museum on the Tampere Workers’ Hall was built by the Finland–Soviet Union Society, and it is considered the only Lenin-related museum outside Russia.

In the building, Lenin and Stalin met for the first time in 1905. How did that happen?

Tampere gained national fame through its industrial rise in the 19th century. The large working-class increased interest in socialism in the city, which was still part of the Soviet Union at the time.

The Russian Revolution was just around the corner, and the building, where the museum is located, used to host the Russian Social Democratic Labour Party meetings.

At the 1905 meeting, Joseph Stalin and Vladimir Ilyich Ulyanov, AKA Lenin, met in person for the first time ever.

A large part of the exhibition at the Lenin Museum revolves around this period, Finland’s independence in 1917, and the subsequent civil war (Jan. 28-May 15, 1918).

The museum also highlights the Russian-Finnish relations during the Cold War to the present day. A truly quirky museum with an even quirkier museum store.

The Moomins are practically a national treasure in Finland. Author Tove Jansson wrote the globally popular children’s books about the Moomins and donated a unique collection of original drawings to the Tampere Art Museum in 1986.

Until 2016, the exhibition was also located in the basement of the Tampere Art Museum. However, on Aug. 9, 2017, the new Moomin Museum was established and opened to the public, finding its home in Tampere Hall.

This is the world’s only Moomin Museum, and it is an experimental museum for art lovers and Moomin fans of all ages.

Tampere has many beautiful churches to offer. Some of them are also in the typical Scandinavian wooden construction. Perhaps the most beautiful church is the Vanha Kirkko (Old Church) on the main square, Keskustori.

It is a yellow wooden church built in 1824 in Empire style.

Four years later, the church got a bell tower. Another beautiful church is the Orthodox church near the train station, with small onion domes. You will be blown away by the churches’ beauty in Tampere.

Pyynikki, the forest area on the Pispala ridge between the two lakes, is a popular place for excursions. Many bicycle and hiking trails lead through the largest park in the city.

In the middle of the park, there is also a 30-meter-high observation tower with a family-owned café.

Here you can get the best doughnuts in town, and don’t forget to pair it with a cup of the delicious Finnish coffee, which Finns drink more than anyone else in the world.

Next to Pyynikki is the enchanting district of Pispala. The colorful wooden houses are a lovely photo motif, and the streets are connected with steep stairs.

The houses with great views of the lakes were once built for the working class. The lakes in the district are just breathtaking. The whole area is so beautiful that it was officially voted the most beautiful residential area in Finland.

There are so many great places in Tampere and around the city for skating. On a beautiful winter day, there’s nothing better than ice skating on Lake Näsijärvi.

When the ice is thick enough, a skating track is plowed onto the lake. There, you can also enjoy refreshments and snacks in the open air.

Skating on natural ice is also offered in Saarikylät village in Kangasala. If you are looking for more places to skate on natural ice, then you should go to lake Tohlopinjärvi in the Tohloppi district of Tampere.

There is also a café and a skate rental point there, which is open on Saturdays and Sundays throughout the season.

However, if you are a romantic type, then you must go to Rousette Skating! In addition to that, the idyllic ice rink in Emil Aaltonen Park in the Tammela district is also a great fit for romantics.

Dream Hostel is no longer an insider’s tip, since the English newspaper The Guardian named Dream Hostel in Tampere one of the 10 best hostels in the world.

It is centrally located near the train station and is certainly a good choice for many Tampere visitors.

From single rooms to family rooms to typically shared rooms, at Dream Hostel, everyone will find the right bed for their Tampere visit.

It is also an ideal accommodation for small families because in the modern kitchen you can prepare dinners for the kids in no time.

22 Amazing Things to Do in Kafr El-Sheikh, Egypt