10 Best Things to Do When in Rome 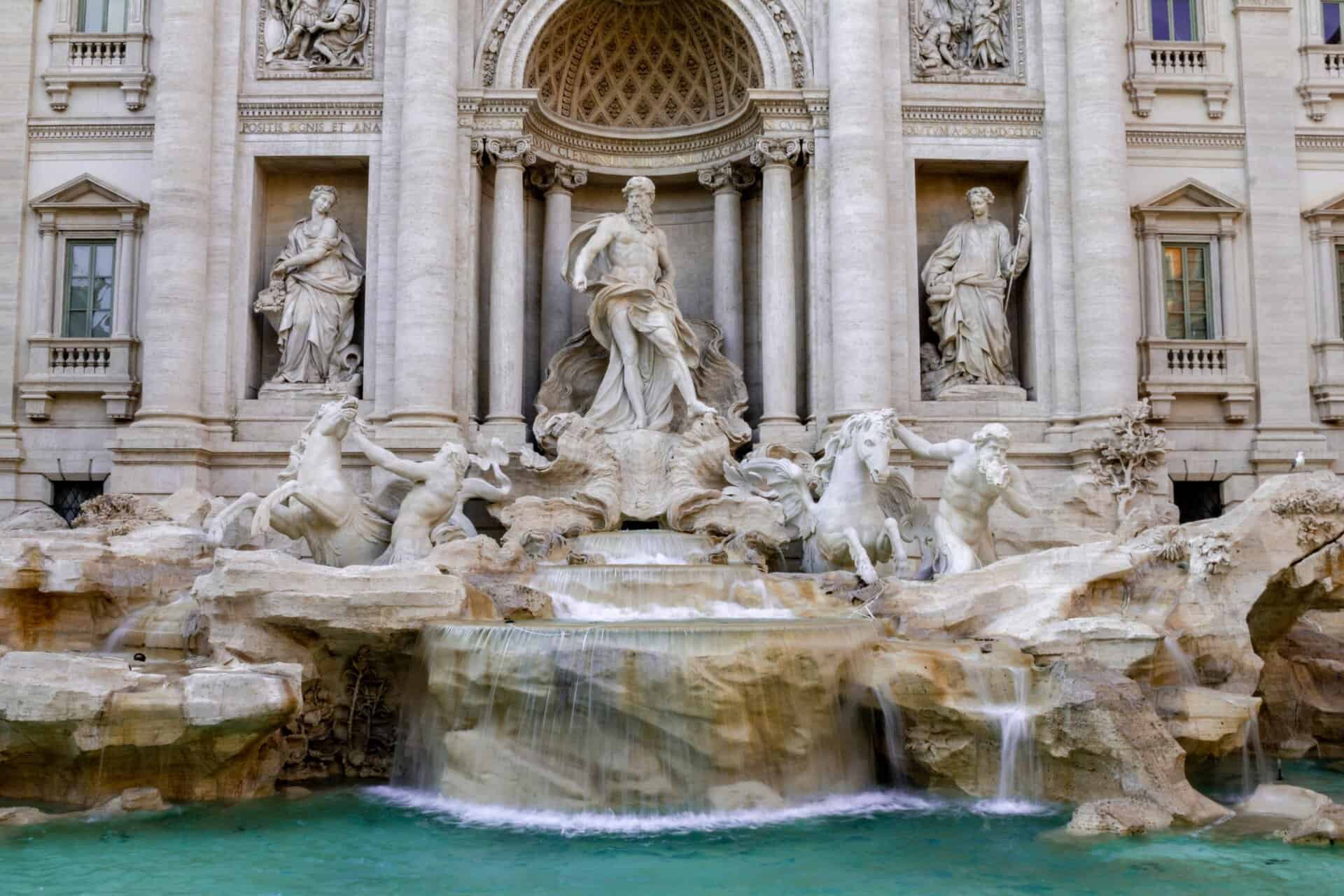 You can’t go to Italy and not visit the capital, Rome. With its impressive monuments and archaeological sites there are plenty of things to do when in Rome.

From its beautiful landscape, delicious food, incredible archaeology, priceless art and many other attractions, Rome has so much to offer and is just waiting to be explored.

Visiting the Colosseum should be at the top your list of things to do when in Rome. Admire the exterior of the world’s largest amphitheatre that was built during the Roman Empire. Stepping inside the Colosseum feels like you are stepping into a Gladiator movie. With the Colosseum still in such good condition it doesn’t take too much imagination to picture all the brutal gladiator fights that went on in one of Rome’s top tourist attractions.

From the city centre of Rome you can get the Metro straight to Colosseo. Step outside of the metro station and the Colosseum is the first thing you see. The Colosseum is not to to be missed on your visit to Rome.

Once a stadium for athletes, the Piazza Navona is the most famous square in the centre of Rome. Spend the day exploring the public open space full of street performers, artists and numerous cafés. Underneath the Piazza Navona is the Stadium of Domitian and you can pay to go down and discover the once thrilling stadium. The Museo di Roma is also located in the square and is home to countless pieces of ancient art.

If you are in Rome during Christmas you have to take the time to go to the Piazza Navona as it transforms into a beautiful Christmas market for the month of December. Feel the magic of Christmas with Rome’s vintage carousel, Italian Christmas treats, decorations and musicians.

On your trip to Rome you have to go visit one of the seven hills of Rome. Escape the busy crowds of the city among the archaeological ruins and take in the beautiful scenic views of Rome from the top of Palatine Hill. There are many impressive ruins to discover on Palatine Hill for example, Domitian’s Palace, Domus Tiberiana and the House of Augustus, the first Emperor of Rome.

From one side of the hill you can view the Roman Forum and the other side the Circus Maximus. The famous stadium that once hosted entertaining chariot races and held over 100,000’s of spectators played an important role in Roman history. Although there is not much left of the Circus Maximus today, the ruin that still stands allows you to imagine the chariots racing around the track.

Both Palatine Hill and Capitoline Hill give a great view of the Roman Forum, which was used as a political, religious and civil centre. The busy centre also acted as a marketplace for trade. You will see the Senate House, Temple of Saturn and Sacra Via to name a few on your visit to the Roman Forum. The Colosseum, Palatine Hill, Circus Maximus and Roman Forum are all in close proximity to each-other and should be added to your itinerary of things to do when in Rome.

Discover the dark-side of the Eternal City with a tour of the Crypts and Catacombs of Rome. Having a tour of a burial site may not be on the top of your list of things to do when in Rome, however, it will be a unique experience that you will not forget. In order to enter the crypts you should follow the dress code in place to avoid being denied entry. To comply with the dress code ensure that you have your knees and shoulders covered. It is also good to note that being underground can get quite cold so we would recommend bringing a sweater just incase you need it.

Catacombs and crypts have some of the oldest frescoes and paintings in the world. One of the most famous crypts in Rome is the Capuchin Crypt. The crypt is uniquely decorated with the bones of over 4000 Capuchin friars and is like nothing you have seen before. At the end of the crypt there is a message on the wall that translates as ” What you are now, we once were. What we are now, you will be.” and it is guaranteed to send a chill down your spine.

Located in the Vatican City St. Peters Basilica is one of the largest and most exquisite churches in the world. You can enter the basilica for free but expect to que for two hours. The long ques are worth it as St. Peters Basilica is like nothing you have seen before. The breath-taking sculptures, the captivating ceilings and impressive domes will have you in awe. The amazing Dome of St. Peters Basilica was designed by Michaelangelo. The dome is so enthralling that you will have an ache in your neck from looking at it for too long.

6. The Vatican Museum and Sistine Chapel

The Vatican is well worth the visit when you come to Rome. The Vatican is the headquarters of the Roman Catholic Church, the site of the tomb of the Apostle Saint Peter and home to the Pope but this does not mean that you have to be a part of the Catholic Church to go to the Vatican and truly appreciate it in all its glory. The Vatican Museum will have you in awe at its beautiful interiors and historical collection.

Some highlights from the Vatican Museum are the Laocoön and his Sons sculpture, the Porphyry Basin, Raphael’s School of Athens painting, the Tapestries Hall, Gallery of Statues and Egyptian Museum. Also inside the Vatican Museum is the Sistine Chapel which contains Michaelanglo’s best known work. The scale of the frescoes will astonish you with their striking colours. You should note that you are not allowed to take pictures inside the Sistine Chapel and you must cover your shoulders and knees when entering. Seeing the Sistine Chapel in person is definitely something everyone has to experience once in their lifetime and is a must do on your list of things to do when in Rome.

The Pantheon is the most well-preserved landmark from Ancient Rome. It is very recognisable and the Pantheon’s architecture has been imitated many times. It’s original purpose was as a temple for Roman Gods and now serves as a church. The Pantheon is stood still in time in the middle of the Piazza della Rotonda. The Church of Santa Maria Sopra Minerva is across form the Pantheon and is home to Michaelangelo’s Risen Christ statue. The Pantheon should definitely be added to your list of things to do when in Rome.

Famously known for starring in films such as “The Talented Mr Ripley” and “Roman Holiday”, the Spanish Steps are an iconic attraction that you must visit when in Rome. There is a beautiful fountain at the bottom of the steps that creates a lovely atmosphere while you look at the steps above. If you want to look down at the bustling energy of Rome from the top of the Spanish Steps you will have to be willing to walk up the 138 steps. Whatever you do while you are at the Spanish Steps, don’t sit down on the steps as it will cost you a hefty fine of €400!

Throwing a coin into the Trevi Fountain should be on your agenda of things to do when in Rome. If possible visit the Trevi Fountain during the day and night to see it in different lights. It is beautiful to see the water glistening in the sunlight and equally as nice to see the sculptures and water illuminated at night. Like many attractions in Rome, the Trevi Fountain has featured in many famous movies including “La Dolce Vita”.

You can also go under the Trevi Fountain where you will find an archaeological site that has water running through it from an aqueduct that also brings the water up to the Trevi Fountain. The underground site also has displays of artifacts that were found during excavation, including African pottery and 100’s of coins. Tradition has it that you throw one coin into the Trevi Fountain to ensure you will return to Rome, throw two coins if you want to fall in love with an Italian and if you throw three coins you will marry the person you meet. It is up to you how many coins you throw to determine your faith.

The Appian way was the most important road in Ancient Road that allowed trade and connections to and from Rome. When in Rome you have to take the opportunity to go to the Appian Way and say that you have walked on the same path as Roman emperors and saints. The Appian way is steeped in history and culture. There are many burial tombs and ruins to look at as you walk along the Appian way. The road has been well-preserved considering its extensive use and strategic importance making it a must-do on your list of things to do when in Rome.

4 Fun Things To do When in Rome

Italy is known for its beautiful cuisine and you will never eat nicer Italian food then in Italy itself. When in Rome you should eat to your hearts content but why not try and create some Italian dishes yourself with the help of local chefs. From pasta to pizza and to even making your own gelato, there are several different cooking classes to choose from in Rome. Here are a two options for you, however there are countless others that you could do.

Although it is at the pricey end of activities you can do when in Rome it will certainly be memorable. Vespas are iconic to Italy and what better way to go around and see Rome then on an actual Vespa. Feel like a true Italian zipping through the streets of the Eternal city. A Vespa ride through the city of Rome is guaranteed to delight. There are so many companies you can choose to go with and here are two options for you.

Go on a boat tour on the river Tiber and discover Rome from a different perspective. Relax on the boat while sailing down the river Tiber and take in the beautiful scenery that Rome has to offer. You can choose to take longer boats trips out of Rome and head down to the Amalfi but if it is short and sweet you are looking for here are some options for you.

For any opera lovers this is the activity for you. Where better to go to see an opera than where it began. With an endless amount of operas to choose from, this is a great way to spend 1-2 hours of your day or night. There are many different operas to choose from and the prices of each vary from under €50 to over €100.

Whether you do everything on this list during your visit to Rome or only one either way you are guaranteed to not be disappointed in the Eternal city.

Why not give our other articles on Rome a read: Top Attractions in Rome, Italy I Top Free Locations to Visit in Rome I 20 Affordable Activities to do in Rome