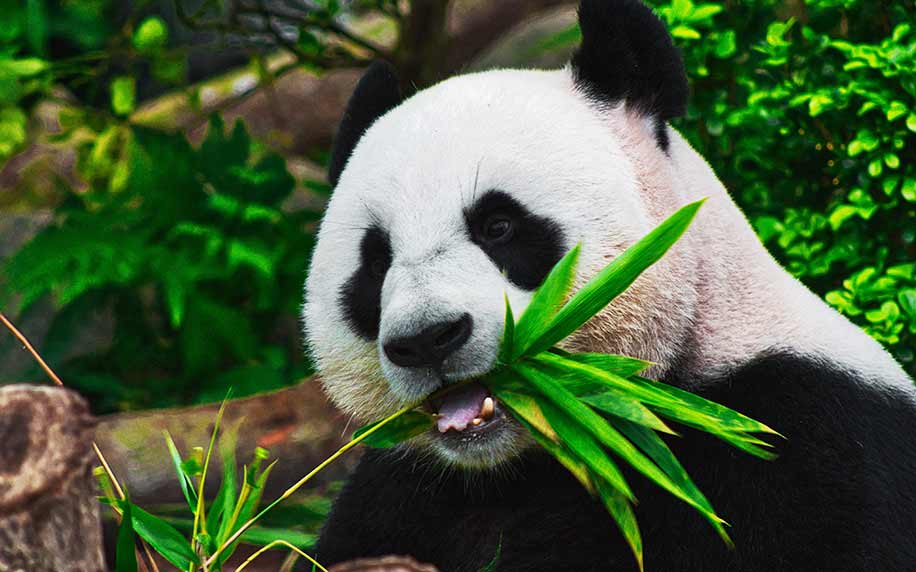 As the national animal of China, the panda is a beloved animal worldwide. The giant panda is endangered and is a protected animal globally – there are only around 2,000 in the world. Pandas originate in China, and other countries can only obtain pandas through cooperation with the Chinese Government. This can be done by establishing a research partnership with the Giant Panda Research Base.

People love giant pandas for a reason. They are cute, furry, and funny but, despite their appearance, should be treated with caution – they are a bear after all!  If you want to see pandas in real life, the Sichuan Province, considered the hometown of pandas, is the best choice.

A Detailed Introduction to the Giant Panda

Many people like pandas, but they usually only have a general impression of pandas. So we will specifically introduce the giant pandas.

The giant panda, academically named Ailuropoda melanoleuca, is mainly distributed in the western and northern mountains of Sichuan Province, Gansu’s southern tip, and the Qinling region Shaanxi. The giant panda is China’s national animal and has a certain reputation worldwide. The adult giant panda has a body length of 1.5-1.8 meters and a weight of about 75-160 kg. It has a relatively docile temperament and rarely initiates attacks. The self-defence ability is not strong, vision and hearing are quite dull, and the sense of smell is good. Due to late maturity, weak cubs, and long breeding cycles, giant pandas’ survival has always been worrying.

A hundred thousand years ago, giant pandas were very common. But after many years of evolution, pandas maintained their original characteristics in form and failed to adapt to their environment, so their numbers have dramatically reduced. Especially in the past 200 years, environmental changes brought about by human activities have exacerbated the decline in the number of giant pandas.

However, continuous protection of giant pandas in recent years has changed this situation. According to a survey conducted by the World Wildlife Fund (WWF) in 2015, the current number of wild pandas is around 1,800, and the number of captive pandas is around 400. According to the rules of the International Union for Conservation of Nature (IUCN), the protection status of giant pandas has been downgraded from endangered to vulnerable. It shows that the protection of Giant Panda has been successful in the past decade.

Due to various reasons, the number of giant pandas declined sharply at the beginning of the last century. Because of this, in the 1960s, the Chinese government began to protect giant pandas. However, the initial protection work did not achieve good results, and the number of giant pandas is still declining. Especially in 1976, Sichuan Fargesia (the main food of wild pandas) bloomed out of season, causing the Fargesia to die on a large scale. Wild pandas have lost their food sources, and their numbers have declined sharply. According to the survey in 1988, there are only about 1,100 giant pandas in the world, which are endangered species.

As the name suggests, the Giant Panda Nature Reserve is an area used to protect the giant panda’s habitat. Some of the existing giant panda sanctuaries are set up only for giant pandas, and some are integrated animal sanctuaries. There are 13 protected areas with giant panda trails, distributed in Sichuan, Shaanxi, and Gansu provinces. The largest three are the following three:

Currently, the Chengdu Research Base of Giant Panda Breeding has nearly 200 giant pandas, making it the largest captive centre for giant pandas. And it is currently open to the public. If you want to choose a place to watch pandas, this is the best choice. You can’t see so many pandas gathering together to play and play in other places in the world.

The Chengdu Research Base of Giant Panda Breeding opens from 7:30 am to 6 pm, and the ticket price is RMB 55 (approximately 6 Pounds).

2) Dujiangyan Breeding training Research Center: The original intention of protecting giant pandas has never been to keep them in captivity and make them pets for humans, but to make them better survive in the wild. Based on this concept, the Chinese government established the Dujiangyan Breeding training Research Center. This centre aims to train captive giant pandas with no wilderness survival experience to adapt to natural life and prepare for the next release. The location of the research institute also has a special meaning. It was established in the place where wild giant pandas were first discovered after the founding of China.

At present, 30-40 giant pandas are trained here every year in the Dujiangyan Breeding training Research Center. Besides giant pandas, some other companion animals are living here.

The opening hours of Dujiangyan Breeding training Research Center are 7:30 am-6:00 pm, and the ticket price is RMB 58 (approximately 6.4 Pounds)

3) Bifengxia Panda Base: The Bifengxia Panda Base is located in Ya’an City, Sichuan Province. It is a new home for captive giant pandas under the increasingly crowded Chengdu Giant Panda Breeding Center. Currently, there are more than 70 pandas in the park (2014).

But the Bifengxia Panda Base has a special feature. It accepts volunteers (including international volunteers). This is currently the only opportunity for non-professionals to get close to pandas. By applying in advance, you can become a volunteer at the base and engage in panda care activities, including cleaning night nests, smashing bamboo, and peeling bamboo shoots. This volunteer activity usually lasts about a week and is suitable for tourists who have more time and love pandas.

A How-To Guide For Teaching English In South Korea