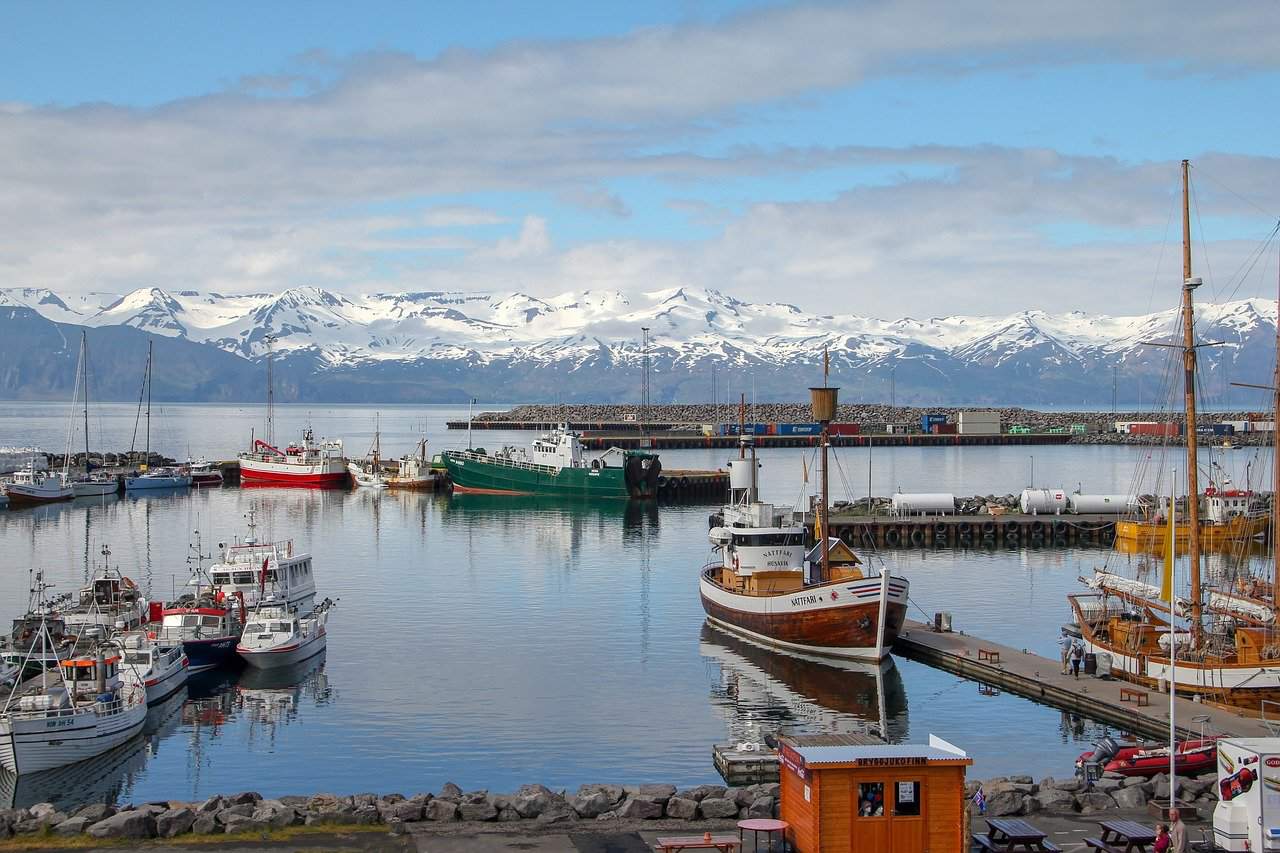 From ancient tales of elves and trolls to beautiful natural sites of glaciers and volcanoes, Iceland is definitely a place of many attractions. When you hear just the word “Iceland” you immediately feel a cold chill, but you would be mistaken to think that Iceland is only white ice scapes. Iceland had many forests, but due to harsh conditions like volcanoes, glaciers and Vikings who forested most of the native trees, the country is now left with few forests. The many popular attractions that you will find there range from cold glaciers to waterfalls to lava fields created by erupting volcanoes years ago. The country’s folklore also makes every site you visit more interesting, when you hear the natives’ stories about those sites’ creation.

Iceland was named by Vikings when it was settled by them in the 800s. The Vikings gave both Iceland and Greenland their names; they misnamed them both on purpose to mislead their enemies. So their enemies would think they were in Greenland instead of following them to Iceland, where they actually settled.

Found along Iceland’s south coast is the largest lava flow in the world and one of Icelands’ most popular attractions. Eldhraun was created because of the Laki eruption in the late 18th century; the breathtaking site has historic and geological significance. It was also used by the Apollo 11 space crew as a training field before their famous moonwalk in 1969, due to the similarity between the lava field and the surface of the moon.

The Eldraun Lava Field was a result of one of the most damaging volcano eruptions in history. For over eight months, Grímsvötn volcano poured out huge amounts of lava causing clouds of poisonous gases that damaged the soil and killed almost half the number of horses and kattle. For over a year, no crops could be grown in the fields and no fish occupied the sea. Which, of course, lead to a famine that was the end of almost quarter of the population.

Eldhraun lava field is very fragile, despite being covered in moss, which is why it’s very dangerous – and not allowed- to walk on the field. Moss is a common plant in Iceland, especially over Iceland’s lava fields. Among the most spectacular moss blankets on the southern coast of Iceland is, of course, the Eldraun Lava Field.

You might find it interesting to know that in November and December 2017, Iceland’s largest active volcano has shown signs of reawakening. The country’s meteorological office has reported an increased semll of sulphur in the area around the volcano. Since this is the first real signs of activity that said volcano has shown in centuries, it is kept under very careful monitoring.

Needless to say, its eruption would be a devastating catastrophe. Another volcano in Iceland, Hekla, has been showing signs of reawakening as well. Helka is Iceland’s most infamous volcano and the closest one to Reykjavik.

Mýrdalsjökull maybe a mouthful, but it is Iceland’s fourth largest ice scape. It is a glacier in the south of the Icelandic highlands and its height reaches 1500 meters with its tallest peak. It is most popular for being atop the explosive volcano, Katla. Mýrdalsjökull is located to the north of the village of Vík and one of its glacial outlets, Sólheimajökull, is the most popular place in Iceland for ice-climbing and hiking in glaciers.

Everybody has heard of Eyjafjallajökull and the volcano beneath it since 2010. However, few know about the much larger volcano right next to it. Katla is concealed by Mýrdalsjökull, but it is one of the contry’s most active volcanoes, having erupted once every fifty years since 930 AD. Katla’s eruptions mostly result in huge ash clouds beacause of the glacier above it, but those ash clouds do lots of damage to crops, livestock and flights are often grounded beacause of them.

This area is also much known for glacial floods or ‘jökulhlaup’, because even though the volcano’s eruption doesn’t show lava, it does cause melting of the ice and in turn causes floods. Those glacial floods are just as dangerous as the lava would be. The area was not highly populated in the past for this reason.

Among the hidden gems of Myrdalsjokull glaciers are the ice caves, which some people are calling the secret ice caves of Myrdalsjokull Glaciers. These are very hard to find and should not be entered without a guide who knows the place well.

Glacial ice caves are not a permenant thing, they come and go depending on the water whirlpools that carve the caves in the first place. The water carves the caves out of the glacial ice with violent force. After the caves are formed, the glaciers shift until they are reduced in size or completely eliminated.

“Foss” is the Icelandic term for waterfall. One of the best-known waterfalls in Iceland is Seljalandsfoss. Being 65 meters tall, Seljalandsfoss is an amazing and breathtaking site that you can’t miss when visiting Iceland.

Walking behind the waterfall is a one of a kind experience, but you have to not be worried about getting a bit wet from the drizzle. A sunny day would be perfect for this visit, bigger chance of rainbows then. During winter the path to go behind the waterfall is usually closed, because it gets too dangerous and people might slip and fall.

Seljalandsfoss is close to Reykjavík (the capital of Iceland and the largest city there, it is the place to visit for those with an interest in the world of arts and culture), you can see the waterfalls (Seljalandsfoss and Skógafoss) and return to Reykjavík on the same day. And Seeing Seljalandsfoss from the road heading towards it, while you get closer and closer to it, is the most amazing sight.

Reynisfjara is one of the world’s most famous black sand beaches, and Iceland’s most beautiful one with its huge basalt accumulations. Found just beside the small fishing village of Vík í Mýrdala, Reynisfjara is one of Iceland’s most popular attractions which you cannot miss visiting. It was voted as one of the top 10 non-tropical beaches to visit on the planet by National Geographic.

The beach has some interesting folklore stories behind it. When visiting Reynisfjara, the first things you will notice are the rocky sea stacks off the shoreline which are known as Reynisdrangar.

Reynisdrangar’s basalt columns, according to local Icelandic folklore, were believed to be trolls trying to pull ships closer to the shore. Unfortunately those trolls were a bit stupid and went out too close to dawn, and turned to stone when the sun rose. Another ancient story tells of a woman who was kidnapped and killed by two trolls. The woman’s husband follows the trolls to Reynisfjara to take revenge; he then froze them to make sure they would never kill again.

This place is also a must-visit location for birdwatchers; Reynisfjara is the home to a large number of nesting birds of different species. Some of the species found there are puffins, fulmars and guillemots.

Of course if you are going to visit the black sand beaches of Reynisfjara, you must be well prepared and informed of the potential dangers that might face you. First off, the waves are particularly violent and reach further up the beach than some would expect. Visitors to Reynisfjara must be made well aware of the potential dangers present at the beach. They are known as sneaker-waves, beacause they occur when least expected with little to no warning. Also the reason for Reynisfjara’s huge waves is that there are no shores between it and Antarctica, giving them thousands of kilometres to build.

So, to keep yourself safe from these sneaker-waves, try to always keep facing the water and keep a safe distance. Aside from the dangers and cautions, Reynisfjara black sand beaches are definitely one of Iceland’s popular attractions that cannot be missed.

Haukadalur is a geothermal valley in South Iceland including; Geysir and Strokkur which are erupting hot springs, or geysers. The bigger of the two is Geysir. The word “geysir” is a derivative of an Old Norse word meaning “gush”.

Being on the popular Golden Circle route, Haukadalur lies to the north of Lake Laugrvatn and is the largest collective of hot springs in Iceland. The surrounding area is live with vivid colors, resulting from the earth elements brought to the surface by the geothermal activity.

The Haukadalur Valley Geysers are one of the most popular hot spring attractions in Iceland, due to the frequent eruptions, guaranteeing for visitors to witness several geothermal eruptions during their visit. The bigger of the two is Geysir, but it has been erupting less frequently over the past few years.

On the other hand, Strokkur, the second geyser of Haukadalur, erupts every 10 to 15 minutes all day long. You will also find other smaller geysers, mineral springs and mud pots; which consist of boiling slurry of geothermal water with minerals and rocks dissolved in it.

The Valley over the Years

Even though the Haukadalur Valley Geysir have been active for more than 10,000 years, they have only been discovered in the late 13th century by Europeans. They noticed them for the first time when the field erupted in geothermal activity in the aftermath of an earthquake. The site has been a destination for tourists since the beginning of the 18th century, for its theraputic mud and erupting geysers. Also images of Geysir erupting in Haukadalur were used to symbolise Iceland throughout the 20th century. Today, almost the two million visitors to Iceland visit Haukadalur Valley during their stay.

“It was very challenging but so, so beautiful. If you have a chance in your life to go and look at the sights and feel the culture of Iceland, do it.”

– Russell Crowe about his visit to Iceland while filming Noah.

“When you get to Iceland and it’s such an incredibly beautiful place and the light is so amazing that it’s hard not to shoot stuff that looks good there. I saw Russell Crowe in Iceland before because they were shooting “Noah” there. They were just leaving when we came and he said:“You gotta dominate the weather.” And I was like, “Okay. I will make sure to dominate the weather. Thanks Russell.” But he was right. He was right because you couldn’t wait around for a cloud to leave. You just had to go and do it and it’s going to change, it’s going to be different. And somehow, the weather respects you for going forward. So it was an amazing time.”

– Ben Stiller about his visit to Iceland while filming The Secret Life of Walter Mitty.

Iceland will definitely give you lots of chances to challenge yourself, it will also give you great stories to tell. So if you love nature and natural breathtaking places are what you are looking for, Iceland should be your next destination. Not only is it a beautiful scenery, but also a country with a huge culture and rich history. There is a lot to do there, starting from exploring lava fields, freezing glaciers, enjoying the hot springs, mud pots and seeing the rare mesmerizing black-sand beaches.