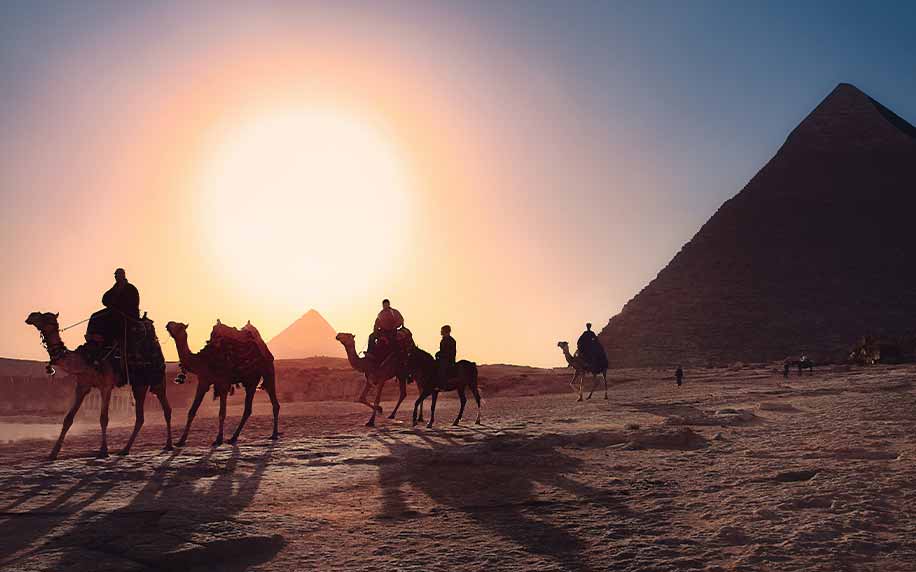 Egypt’s long and rich history makes it the perfect setting for so many international blockbusters that used several of its world-renowned locations as backdrops to their movies. With plenty of famous locations in Egypt like the Pyramids of Giza and the Sphinx to the sprawling streets of Khan El Khalili, the waters of the River Nile, and the colourful depths of the Red Sea, Egypt has seen many filmmakers feature its cities and landmarks to add an authentic element to their work.

Cairo is the biggest city in the Arab world and provides a mixture of ancient and modern elements suitable for films that are either set in the past or the present. On the other hand, the Red Sea, with its numerous stunning beaches and diving spots, is more than perfect for any adventure film.

Many documentaries and TV shows were filmed along the River Nile, either to document its origins and the civilizations that grew alongside it or to use it as a mysterious backdrop to its stories.

Furthermore, we cannot forget the Western Desert which has seen many epics and historical movies use its 1,000 km expanse to take audiences back in time to ancient worlds and civilizations. Similarly, we cannot forget Luxor and Aswan with their multitude of temples, tombs, and ancient landmarks that provide perfect settings for films focused on ancient Egypt.

On the other hand, the history of the Greek empire in Egypt can be told through the streets of Alexandria, the Mediterranean city that was the former capital of Egypt during the reign of Alexander the Great in 331 BC.

Egypt has one of the biggest local movie and TV industries in the region, so, naturally, it drew the attention of international filmmakers as well. Over the years, many international hit movies were filmed in the country, using its ancient monuments to enrich its storytelling.

Films with Famous Locations in Egypt

1. Transformers: Revenge of the Fallen

This Michael Bay 2009 blockbuster was filmed by the Pyramids of Giza and in the city of Luxor. The crew spent three days shooting there with Megan Fox and Shia La Boeuf.

The lead characters in the film end up in Egypt, at the Pyramids of Giza, through a sequence of events. They also head to the temples of Karnak at Luxor. Although the film makes it seem like both sites are within walking distance, the Pyramids and the Temple of Karnak are over 300 miles apart – some famous locations in Egypt.

Released in 1992, the biopic of Malcolm X starring Denzel Washington digs deep into the life of the African-American Muslim leader and human rights activist. In the film, Malcolm X visits Egypt and is seen praying at the Mohammed Ali Mosque at the Cairo Citadel. There were also scenes in the movie that were set in Saudi Arabia’s Mecca, but they were filmed in Egypt as well.

Fans of the James Bond films will be glad to know that the decades-long series also made a stop in Egypt while filming The Spy Who Loved Me starring Roger Moore in 1977.  In the film, Bond is dispatched to Cairo where the scenes take us to the Giza Necropolis, the three Great Pyramids, and the Sphinx.

He also finds himself on the Nile in Luxor and venturing into the Great Hypostyle Hall, the giant columns in the temple of Karnak. Going even further south, the characters can be seen at the Temple of Rameses II, behind the four great statues of the pharaoh, at Abu Simbel, the temple that was pulled apart in the mid-Sixties in order to move it to higher ground to save it from flooding as a result of the construction of the Aswan High Dam on the Nile.

4. Death on The Nile

The 1978 Agatha Christie Hercule Poirot mystery was based in Egypt and featured many of its most notable historical locations, like the giant pyramids at Giza and the Sphinx in Giza, the Temple of Karnak in Luxor as well as the Sofitel Legend Old Cataract Aswan in Aswan.

It makes absolute sense that a biopic about the last pharaoh queen to rule Egypt should in fact have been filmed, at least partly, in Egypt. This Elizabeth Taylor starrer from 1963 had the biggest budget in movie history, so naturally, its sets and costumes were very well thought out. Aside from filming in Italy and Spain, the movie also ventured south of the Mediterranean to Egypt in order to capture the authenticity of the events. It remains one of the most well-known Hollywood films to depict ancient Egypt.

A movie about a young man who discovers the secret to teleportation, Jumper takes its lead character to the Giza Pyramids in his efforts to learn more about his abilities. The scenes capture the larger than life feeling you get when visiting the ancient site as we saw the hero standing atop the Sphinx staring into the distance with the pyramids serving as a backdrop to the scene.

7. A Hologram for the King

Starring Tom Hanks, this comedy-drama is about an American sales rep looking to regain his losses by travelling to Saudi Arabia and selling his company’s product to a wealthy monarch. Although most of the plot is based in Saudi Arabia, Tom Hanks also filmed some scenes in the city of Hurghada, on the coast of the Red Sea in Egypt.

This 2009 romantic film is based in Cairo, as the title suggests, around two people who fall unexpectedly in love. Among the locations featured in the film are the Shepheard Hotel, the Great Pyramids, Giza Plateau, Cairo International Airport, and the markets of Khan El-Khalili.

9. Secrets of the Saqqara Tomb

Another interesting viewing experience is this documentary that was released in 2020 by Netflix to cover the amazing excavations made by Egyptian archaeologists and the numerous tombs they’ve unearthed that have captivated the attention of the world. The film follows the efforts of the excavation teams in the Saqqara Pyramid area as they attempt to decipher the history of these newly discovered mummies.

Egypt’s rich history makes it one of the best choices for filmmakers to explore opportunities for filming their projects, whether their films are in fact centered on the world of ancient Egypt or modern-day stories including action and adventure.

In the end, no one can dispute that the Giza plateau alone makes for a magnificent backdrop to any scene you can imagine.