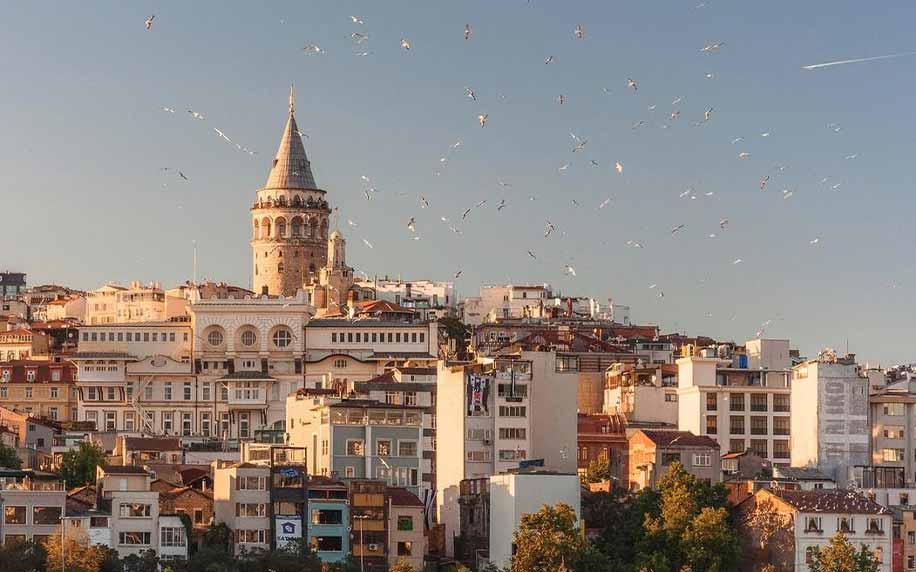 Are you looking for an unforgettable trip, full of adventure and wonder? No need to look on the other side of the world, the second-largest European metropolis is not far from you! The one that was once the great Constantinople or the only Byzantium, is a truly precious treasure that begs to be discovered. Here are 10 reasons why Istanbul should be on your destination list

Istanbul preserves extraordinary historical remains. Immersed in the past, Istanbul is the city of the 3 empires: Ottoman, Roman and Byzantine. It’s just a pleasure to visit a city that includes the Topkapi Palace, the official residence of the Ottoman Sultans, the Saint Sophia Basilica, considered the eighth wonder of the world and the Blue Mosque which is the culmination of two centuries of development, Ottoman and Byzantine. These three historical monuments are the most visited and best known in the city.

Istanbul’s tallest building, a medieval tower, the Galata Tower, built in the 14th century at almost 70m above sea level, and that offers an unrivalled panorama of the pearl of the Bosphorus.

3. Bosphorus Cruise: from Europe to Asia

Istanbul is also the city of two continents, it is the only city in the world divided in two where you can go from Europe to Asia in a few minutes! You can take advantage of the large port of Istanbul to take a ferry ride to call among the Turks “water taxis” but also restaurant boats because restaurants are open on these boats to enjoy this unforgettable moment! You might even see dolphins on a boat ride. This Cruise is the best way to discover monuments that are only visible from the sea, such as the grand palaces of Dolmabahçe and Beylerbeyi or the University of Galatasaray.

5. The Grand Bazaar and shopping

Istanbul is also known for shopping with its many bazaars, the best known is the Grand Bazaar which is one of the largest souks in Europe and one of the largest covered markets in the world. It is made up of 58 interior streets and more than 4000 shops, jewellery, rugs, textiles, mosaics, silverware. There is also the famous Egyptian Bazaar which is also referred to as the Spice Bazaar for the multitude of spice choices found inside. For shopping, Istiklal street is about 3 kilometres long where there are many shops but also art galleries, cinemas, theatres, libraries, cafes and restaurants.

Turkish food is also a real pleasure in Istanbul. The most famous dishes are “lamhacum” which is a Turkish pizza consists of a thin dough on which we place chopped meat and onion, lemon, parsley and spices and “Kofte” which is a typical meatball. There is also the “börek” which is small bricks made from very fine wheat pancakes filled with cheese, spinach, minced meat and potatoes and “Dolma” the typical leaves of vine stuffed with rice, spices and lemon. They are also well known for their desserts. The best known is baklava and lokoum. Baklava is a fairly sweet pastry made from puff pastry with crushed nuts and honey. Lokoum is a Turkish delight, a confectionery of Ottoman origin created from sugar and starch.

They are also well known for their Turkish coffee with sugar that does not mix with milk and tea for their teapot and their way of serving in typical Turkish glasses. There is also a very famous drink named “ayran” made with liquid sheep milk yogurt, with lemon juice, salt and pepper.

The key element in Istanbul life and its constant animation is the culture of street food. And here we are spoiled for choice: bagels, grilled corn, lemon mussels, homemade ice cream. The full menu is across the street.

Taksim Square Istanbul is a multicultural centre that lives 24/24 and 7/7, with large flows of people. Taksim Square is located in Beyoğlu district. Taksim park is the most popular park in the city. It covers an area of about 200 meters long and 100 meters wide. Taksim is also a favourite place for public events and gatherings. It is an important hub for public transport in Istanbul. Taksim is located at the start of the famous Istiklal street in which a tram goes back and forth.

8. The City that Never Sleeps

Istanbul is a city that never sleeps since there is an impressive number of bars, nightclubs, and concert halls. Istanbul brings together all the traditions of the country. In the street, many activities liven up your evenings in particular with the whirling dervishes, fascinating traditional dances. They are men who circle around themselves for whole minutes. They represent a religious brotherhood associated with Sufism.

Turkish baths and hammams are very popular in the city. You will be able to experience a moment of relaxation in real realms of pleasure and well-being with steam baths, full-body treatments and massages. We recommend you go to Istanbul’s oldest hammam, Cemberlitas for its long history.

With the change of the Turkish lira, the prices are very interesting to visit Istanbul and enjoy the city at a low cost. For the Leander’s tower, it takes around €5 for the round trip by boat, price per person. For major monuments in the city like Hagia Sophia or the Blue Mosque, admission is less than €10. Even the Bosphorus cruise costs you the cost of a metro ticket for less than €2. For food also, you can eat in a gourmet restaurant for less than €5. In addition, the important monuments, as well as the grand bazaar, are all located in the Sultanahmet district, the most famous district in the city. You can walk from one point to another, but you can also take the metro or a taxi which is not expensive at all in Turkey. Getting a taxi is also one of the most common means of transport in the city.