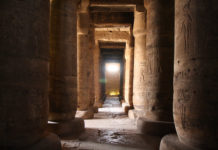 There are different hidden gems in Cairo, Egypt, which a lot of people know nothing about and Beat El Sehemy is among the list since not all those who visit Egypt know about it. Beat El Sehemy is found in El Moez street, so you will not only come to it, but will go through the old streets of Egypt as well.

Beat El Sehemy, which means “El Sehemy house”, was not built by Sheikh Ahmed As Suhaymi, whose family lived there for several years and thus the name was given to the place when it was transformed to a museum, but it was built by Abdel Wahab El Tablawy back in the era when El Darb El-Asfar – where this is now located – was a very prestigious and expensive area in Medieval Cairo.

0
Belfast, the capital city of Northern Ireland, is a completely different place to the one that has been told in the history books. The...
Read more
County Antrim

0
Known as a ‘raised beach’, Ballintoy's name comes from the Irish Baile an Tuaigh, meaning 'the northern townland'. It is located in County Antrim,...
Read more
History

0
The Celts were a major power in Europe before the dawn of Christianity. At the height of their power, the Celts established themselves across...
Read more

0
Elizabeth Bowen is a famous Irish author who is remembered for her literary works. She is known for her novels and short stories, which...
Read more
Bars & Restaurants

0
Derry, having been awarded City of Culture 2013, has much to offer in terms of culture, fun, diversity, and excitement. Due to this, it...
Read more
Ireland

0
The beautiful landscape of Ireland and its magnificent history has made its way onto the big screen; From Television shows to huge Hollywood blockbusters, Ireland...
Read more