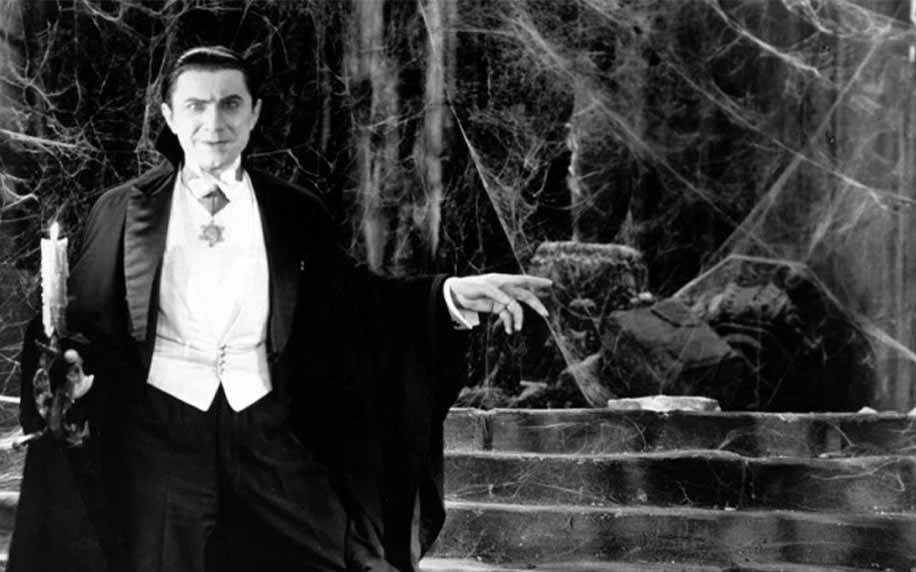 Published in 1897, Bram Stoker’s gothic horror novel Dracula remains one of the most enduring and popular novels of all time. Inspiring countless movies and literature, Dracula has become a must-read for horror fans and its use of classic vampire mythology – drinking blood, no mirror reflection, transfiguration – has influenced modern culture’s understanding and depiction of vampires ever since.

The novel makes use of several locations within its narrative, including Transylvania (not a country but a region of Romania) and Wallachia, where the real-life inspiration for Dracula, Vlad the Impaler, ruled, and Whitby, a small seaside town in Yorkshire. Also noteworthy for Dracula fans is Bram Stoker’s home-city of Dublin and London, where Stoker spent most of his life.

Although no record of Vlad the Impaler visiting Bran Castle exists, its dramatic location and medieval aesthetic have led literary scholars to conclude that it inspired Bram Stoker and, as it is the only castle in the area that resembles Stoker’s description, was the basis for Dracula’s home in the novel. Located in the Carpathian Mountains of the region, the castle has become a national landmark and has embraced its Dracula heritage, officially dubbing it ‘Dracula’s Castle’. The castle is also a museum which displays the art and furniture collected by Queen Marie, the last Queen of Romania. Regardless of its dubious connection to the novel, it is a wonderous castle worthy of a visit.

The castle was designed as a military fortress on the Transylvanian side of the Wallachian border, completed in 1388. It was built on the site of a Teutonic Order wooden castle that was destroyed by Mongols in 1242. Since then, it has been used in defence against the invading Ottoman Empire, a customs post on the mountain pass border of Wallachia and Transylvania, sheltered various figures of nobility and importance, including warlord Mircea the Elder, and was seized by the Socialist Republic of Romania. The castle has changed hands between various royal families and governments during the past centuries; it is currently owned by the descendants of the Royal House of Habsburg.

Vlad the Impaler’s home and court, while he resided in the Romanian capital of Bucharest, was Old Princely Court. Most of Vlad’s reign was dictated by an ongoing conflict with the Ottoman Empire, so Vlad strategically chose a location where he could protect the vital southern border, which was adjacent to two rivers, the Danube and the Dâmbovița. Formally known as the Curtea Veche, the fortress became known as Old Princely Court after Vlad referred to it as his “princely residence” in a 1459 document.

A century later, warlord Mircea Ciobanul repaired the fortress from the damage it endured during Vlad’s reign, enabling it to become the heart of Bucharest with the city’s trades and craftsmen living on and near its grounds. A century after that, it was restored by Wallachian Prince Constantin Brâncoveanu.

The true castle of Vlad the Impaler, the ruined Poenari Fortress is located on the highlands of Mount Cetatea. It is close to the Făgăraș Mountains, the highest of the Southern Carpathian Mountains, and is atop a canyon formed on Argeș River valley. Constructed in the 13th century, the Poenaria Fortress was the stronghold of the Basarab rulers, the first family to provide Wallachia with a line of princes. It was in ruins by the time Vlad took over in the 15th century. Vlad thought the fortress was ideal for overseeing the surrounding land and instilling an image of superiority against his enemies. Using the rocks within the ruins of Castle Poenari and Castle Argeș, Vlad forced the enslaved enemies from the nobility of the Danubian Principalities of Wallachia and Moldavia to rebuild the fortress to its former glory. Although abandoned on and off over the centuries, the Poenari fortress is now maintained by the Argeș County Museum.

Located at the northern end of Snagov Lake, just outside of Bucharest, Snagov Island houses a medieval monastery that is believed the be the final resting place of Vlad the Impaler. The monastery is a simple stone building, with a respectful and peaceful atmosphere accentuated by the calm, surrounding waters. It dates back to the 15th century; its first written record is in a document from Mircea the Elder’s court.

Although there is a body at rest in the back of the church, historians and scholars are unsure if it is the body of Vlad the Impaler. It is possible, as Vlad had strong connections to the area – he built a bridge over the lake, a bell tower, an escape tunnel, a prison, a torture chamber, a church and fortified the monastery itself – but as there is no documentation of where Vlad it buried, the body Snagov may not be his. Most historians believe that Vlad is more likely buried in or near Comana, an ancient city in Turkey, but regardless of where Vlad is buried, he had a relationship with Snagov, making it a must-see for Dracula enthusiasts.

Whitby is a small coastal town in the Yorkshire region of northern England. It has a rich Viking and Norman heritage, immortalized in the various buildings through the town, and is home to Whitby Abbey, a medieval abbey which inspired Bram Stoker. After being advised to visit Whitby by famous actor and close friend Sir Henry Irving, Stoker travelled to the small town in 1890. With planning for Dracula already underway, Stoker used his time in Whitby to research and develop his ideas. It was in Whitby library where Stoker discovered the history of Vlad the Impaler, and from that moment decided his title character would be called Count Dracula; until that point, the Count had been Count Wampyr.

Whitby is a key location in the novel. Mina and her friend Lucy reside there while Mina’s fiancée Jonathan is in Transylvania dealing with the Count’s legal and financial matters and is where Mina first learns of the local legends and superstitions surrounding vampires. The famous 99 steps up to the 11th-century abbey are featured as part of the walk Mina embarks upon almost every day.  Whitby is also where Dracula first steps foot in England. The Demeter, the ship Dracula travels to England on, runs aground in Whitby after Dracula murders its crew. The Count’s first victim in Whitby is a man named Swales, and visitors to Whitby can see the real-life grave of a man named Swales in the graveyard beside St. Mary’s Church.

Whitby is not only gothically picturesque, but it also offers The Dracula Experience, “a unique tour through the Dracula story and the connection to Whitby. Using animated scenes, electronic special effects and live actors”.

Dating back to the late 1700s, the Lyceum Theatre was where Bram Stoker worked for 27 years. He was the manager of renowned stage actor Sir Henry Irving (the first actor to be knighted by the royal family), with whom Stoker formed a lifelong friendship, and was appointed the Business Manager of the theatre when Irving took over as Theatre Manager. Located in Covent Garden, this beautiful theatre was where Stoker wrote a great deal of Dracula and watching Irving perform on stage here was inspired Stoker’s dramatic characterization of The Count.

The Lyceum Theatre remains open today as one of London’s most prominent and important theatres. Not only is it a crucial part of the creation of Dracula, but it has also hosted countless famous faces over the centuries, including The Rolling Stones, Prince, and Queen.

An interesting note for horror fans too is that Edgar Allan Poe’s maternal grandparents performed here during their acting careers.

Bram Stoker’s final resting place is Golders Green Crematorium and Mausoleum in London. Established in 1902, it is one of the oldest crematoriums in Britain, is secular and therefore accepts people of any or no religious beliefs, and is home to the remains of many famous faces including psychoanalyst Sigmund Freud, children’s author Enid Blyton, and German silent film star, and inspiration for DC Comics’ Joker, Conrad Veidt.

Stoker published many works before and after Dracula, including The Snake’s Pass and The Lair of the White Worm. He passed away on 20th April 1912, the exact cause of his death unclear; some historians believe it was syphilis, a common illness in Victorian Britain, others believe it was a combination of overwork and the damage already done by previous strokes. His ashes are entombed with his son Irving Noel, who passed away in 1961.

Trinity College is a constituent college of the University of Dublin, a research university in Dublin. It was established in 1592 and remains one of the most famous and prestigious universities in Ireland. It is renowned for its beautiful Georgian architecture and its library, which houses around 7 million printed volumes and manuscripts, including the renowned Book of Kells, which was sent to the college in 1661 for protection after the raids on religious institutions were committed during the reign of Oliver Cromwell. The library also has a rare copy of the 1916 Proclamation of the Irish Republic and a 15th-century wooden harp, which is the model for the contemporary symbol of Ireland.

It was here where Bram Stoker achieved his Bachelor’s and Masters degrees. Stoker excelled in sports, particularly rowing, he was president of the University Philosophical Society, where his first paper was on Sensationalism in Fiction and Society, and he was the auditor of the College Historical Society (the Hist).

Dublin Castle dates back to the 11th century during the reign of King John, the first lord of Ireland, and is one of Dublin’s most historically significant buildings. It was used as a fortification for the Norman settlers of Ireland, as a residence for the Viceroy of Ireland, the representative of the Monarch, has been used as courts. The castle has changed hands over the centuries, depending on whether Ireland was under Irish or British rule, but it has always been a site for government administration.

Before becoming a writer, Bram Stoker followed his father’s footsteps into the civil service, with Dublin Castle serving as his place of work. Disillusioned with the monotony of governmental work, Stoker volunteered as the theatre critic for the Dublin Evening Mail, which was co-owned by Sheridan Le Fanu, a fellow Irishman who penned famous gothic tales including the lesbian vampire novel Carmilla. From then on, Stoker knew what he wanted to do: write.

Bram Stoker was born in Clontarf, a small coastal suburb in North Dublin. A sickly child, Stoker spent the first seven years of his life bedbound. His mother Charlotte would amuse him with ghostly tales and stories of ancient Irish mythology, which most literary scholars agree cemented a love of storytelling in young Stoker for the rest of his life.

Clontarf has embraced its role in gothic literary history by paying homage to Stoker. Visitors can stay at the Bram Stoker hotel, visit Stoker’s childhood home in Marino Crescent, and indulge in the Castle Dracula Experience.

Bari: The California of Southern Italy

Things to Do In Italy for Adventure