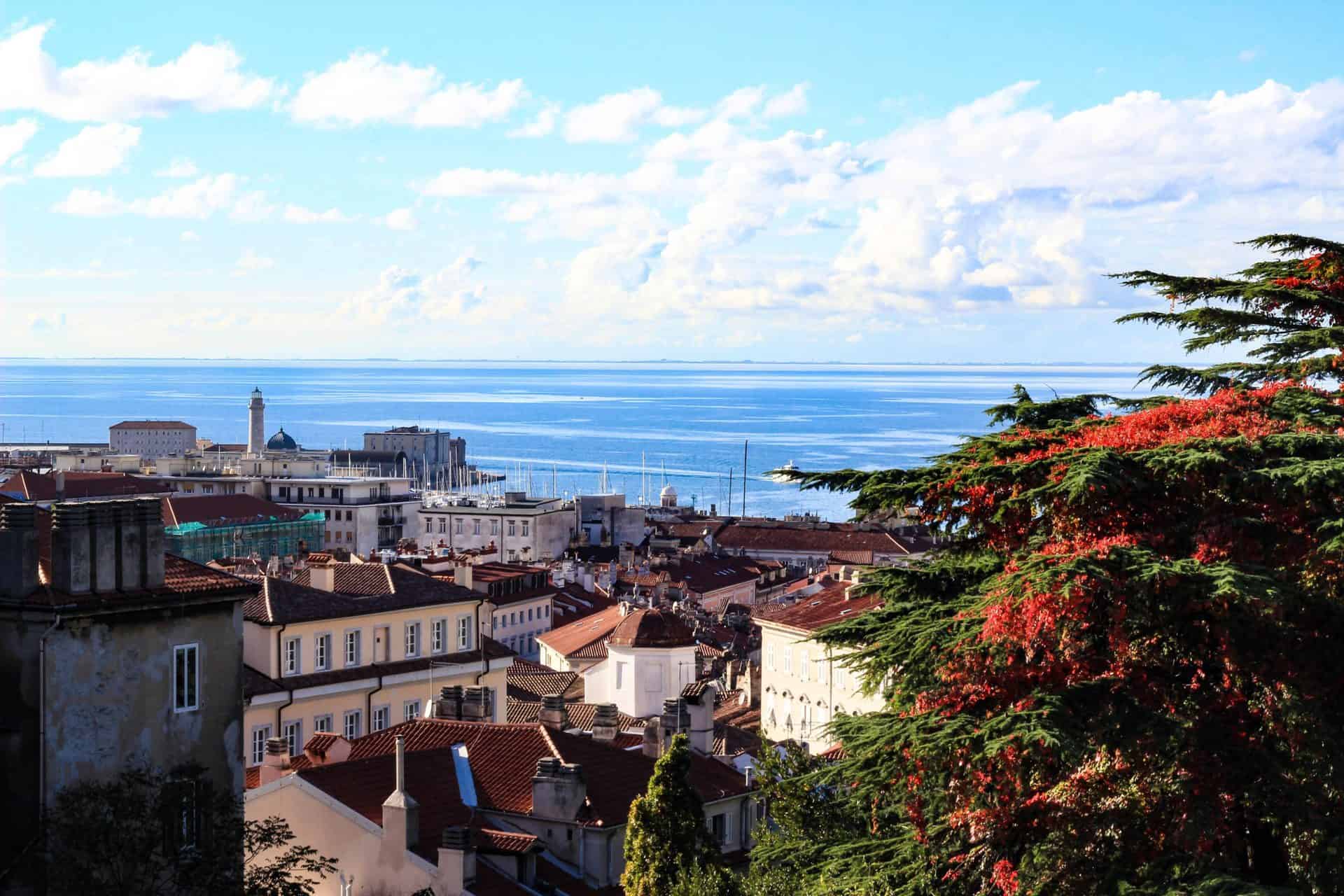 Rome, Venice, Florence, those are the cities most tourists visit and rave about. Have you heard about Trieste though? An amazingly charming city and seaport in northeastern Italy, just on the border of Slovenia.

The city of Trieste is special for its Austrian-Hungarian history, port, picturesque nature and unique Italian atmosphere. All of that, plus amazing cafes and restaurants will be the reason why you won’t want to leave. Here are 10 amazing places you must visit in Trieste.

This square is not only the biggest one in Trieste and is allegedly the largest sea-facing square in Europe. It has hosted many mainstream name concerts including, Green Day in 2013 or Iron Maiden in 2016 as well as important head state meetings. It’s also more intimately known among locals for its markets and cultural events.

One of the most important buildings is the Palazzo del Comune (also referred to as Il Municipio). This building is now used as the city hall. Palazzo Lloyd Triestino, one of the most important shipping companies in the mid 19th century is also represented in Trieste. As the city became a strategic point of the Austrian-Hungarian empire, they built its headquarters just in the main square.

The third notable building is the Palazzo Stratti, the oldest surviving building now owned by Generali. This palazzo is especially interesting because of its famous Caffé degli Specchi. The place is popular among intellectuals, tradesmen as well as locals, offering concerts and a unique Hapsburg Empire atmosphere. Recently overtaken by the Faggiotto family who are renowned chocolatiers, this café is definitely more than just ordinary!

Oldest but coolest neighborhood in Trieste offers the best of this lovely Italian seaport city. With cozy and authentic cafés and restaurants, this place is best known for its small squares and narrow streets. Find your way to Santa Maria Maggiore, a church built by the Jesuits in the beginning of the 17th century. This church is meant to protect the city’s inhabitants, with people gathering for a solemn pontifical mass every year since the terrible epidemic in 1849.

The remembrance park is located just in the heart of Trieste, in the middle of a green area along the Via Capitolina. The luscious park rises to the hill with a castle on its top. Inspired by the tree of freedom, this park has hugely been promoted by Dario Lupi, the secretary of education at the time of French Revolution to encourage italian pupils to commemorate those, who lost their lives in the first world. Each Italian soldier would thus be commemorated by planting a tree.

With the castle on the top, there is a  ‘stairway of the giants’ on the opposite of it with a fountain sculpture installed in 1938 on the occasion of Benito Mussolini’s visit. It has never been taken down. More interestingly, there is a sculpture of James Joyce who has visited Trieste on many occasions.

Founded in 1900 by Alberto Pirona, this lovely bakery is located in Largo Barriera Vecchia. While it offers quick snacks and treats, the café is popular among intellectuals and known as the pastry shop where James Joyce began to write his Ulysses. To read more about his life and work please click here.

The Cathedral and Castle of Saint Giusto

The rumor has it the castle was firstly built during the Roman Empire, however, it is almost certain the proper works began in 1468. They had lasted almost two hundred years, with some of its best defensive structures being built to protect the city of Trieste. During the second half of the 18th century, the castle was used as a garrison and a prison. It was later  converted into museums with different types of tours available. One of the most interesting ones includes the lapiradium of Tergeste dedicated to the history of Trieste in Roman times.

The Cathedral of Saint Giusto is made mostly in Gothic style with a Romanesque tower, built around the bell tower of the former church of Santa Maria. Two of the five naves belonged to the Romanesque basilica, while the one on the right being a medieval temple. There are a couple of Byzantine mosaics making this Cathedral even more interesting.

Mikeze and Jakeze, two original sculptures are displayed here as well, with their replicas standing beside the town hall bell in the main square.

If there were just two things to visit in Trieste, this pier must definitely be one of them. The walk away extending about 200 metres out to the sea is a magical place, especially during sunsets. It was built on the San Carlo shipwreck which sank in the harbour in 1751. It used to be a very important dock for both moving passengers and docks. Because of the destroyer Audace, the San Carlo pier was renamed in memory of this event. It is no longer used as a dock but remains popular especially among tourists.

Also known as the victory lighthouse in Trieste, it’s located on the hill of Gretta and belongs to one of the tallest lighthouses in the world. It actively serves to navigate the Gulf of Trieste and is open to the public. With lots of buildings and sights commemorating the First World War in Trieste, the lighthouse is no different. It serves as a monument to commemorate sailors who died during the First World War and its inscription says: ‘’shine in memory of those who died at sea’’. The Vittoria Faro is a particularly famous viewpoint in Trieste, with the interiors being able to be viewed up to the first floor.

Trieste is a city of great panoramas and the easiest way to spot those is through the Napoleonic Road. This easy path, perfect for family trips, walking or cycling, offers beautiful views of the city and Gulf of Trieste. Get some fresh air, get fit and discover the route which will lead you through the alleged route of the Napoleonic troop who it is named after. Starting in Piazzale dell’Obelisco in Opicina, the route leaves the wooded area and continues through a rocky area.

If you ever went to a big Italian city, you’ve probably googled where to go if you feel like sunbathing or enjoying a swim in the sea. Look no further. Pinewood of Barcola, just outside of the city of Trieste is just the place for you! This area is covered in the pine forest of 25.4k square metres, providing just the tranquility you need after a day in Trieste. Perfect for families, athletes with recreational facilities or occasional visitors, this part will amaze you.

The Archduke Ferdinand Maximilian of Hapsburg purchased the land firstly in 1855 and it was part of his private residence for almost 10 years. The original idea for the garden consisted of orange and lemon trees which unfortunately did not survive the first winter. The garden has been reconstructed many times, and it’s now mostly home for holm-oaks and some examples of exotic Mediterranean plants. Among the other items of decor planned by Maximilian there is also a series of cannons, which were a gift from Leopold I and are aligned along the terrace overlooking the sea.

If we haven’t convinced you by now, then check out some of our other Italy based articles here. But, it is kind of impossible to miss out on Trieste after these attractions and sweet treats. A place with such gorgeous views, and bustling city environment, begs to be visited.

New York City: A Tourist’s Guide To The Big Apple