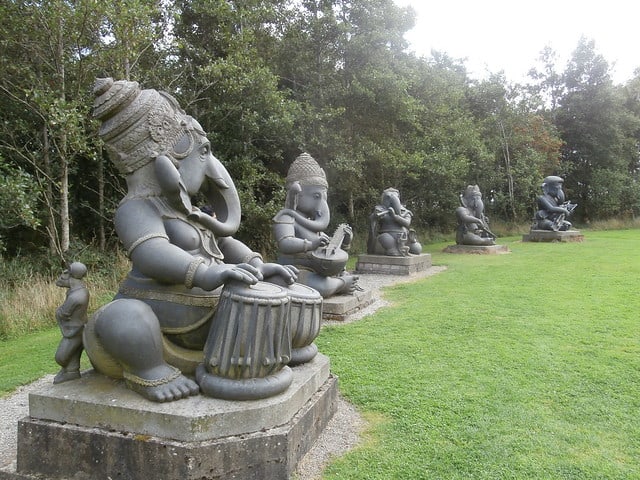 Want to escape from the stresses and strains of everyday life? The unique Victors Way Indian sculpture park in County Wicklow, Ireland, is a real hidden gem.

At Victor’s Way Indian Sculpture Park you’ll discover a tranquil meditation garden with incredible granite sculptures. The attraction was created by craftsmen in Mahabalipuram, India. The sculptures have now found their way to County Wicklow.

Read on to discover why Victor’s Way is a must-see!

The Unusual Indian Sculptures on Display

Victor’s Way park covers 22 acres including a series of dancing figures of Ganesh, Shiva and other Hindu deities. Other notable sculptures at the park include a skeletal Buddha-like figure.

You also find a sculpture known as The Split Man showing a figure ripping itself into two, suggesting “the mental state of the dysfunctional human.”

The 14 Indian sculptures took a phenomenal 20 years to create and were based on designs created by park owner Victor Langheld from 1989. Victor Langheld was inspired to develop the designs after a trip to India in search of enlightenment.

The Reopening of Victor’s Way Park

The park was known as Victoria’s Way up until 2015, when it was eventually closed by its owner.

He said: “Too may day-trippers came turned it into a fun park for parents with children. It was designed as a contemplative garden for over 28’s.”

However, in 2016 the park reopened with its original name of Victor’s Way. A new age restriction was put in place to limit the park to those who would appreciate the park’s spiritual meaning.

The relaunched park was described by Slate magazine as “a garden designed to change your life”.

Although the park won’t suit everyone’s taste, it’s one of the unique things to discover in Ireland. If you’re looking to escape from your busy daily life then a trip to the peaceful Victor’s Way Park might just be what you need. In addition, it was created for those between the ages of 28 to 60 years old as a space for contemplation.

The outdoor park is definitely unlike anything you’ll have seen before. The sculptures are incredibly detailed and harrowing at times. It’s not for the faint of heart or for the squeamish.  But despite the intense display, the sculptures offer deeper meaning worth exploring.

It may not be the most popular attraction in Ireland but it offers something very interesting. The park is not considered a family park, rather a contemplative environment where you get to experience the different stages of life.

Due to the increase in visiting numbers, the last season, the park administration decided to put a limit to the number of visitors. Hence, a new reservation system was set in place, which would both, allow visitors to fully experience the park’s spirituality, and help in combating the spreading Covid-19 pandemic.

Closed during the winter season.

€10 (including the booking fee) per adult.

*Children are unadvised to visit.

*Pre-booking is a must!

Have you ever been to the Indian Sculpture Park in Victors Way? We’d love to hear your thoughts on the attraction.

Also check out some other tourist attractions that might interest you: The Jeanie Johnston: Irish Immigrant Ship| The Famous Carrick-a-Rede Rope Bridge| Classiebawn Castle: Owned by Royals and inhabited by Ghosts| The Gobbins: Europe’s Most Dramatic Cliff Path