Close X
Home/European Region/Valencia: 12 Amazing Things to Do and See

Valencia: 12 Amazing Things to Do and See 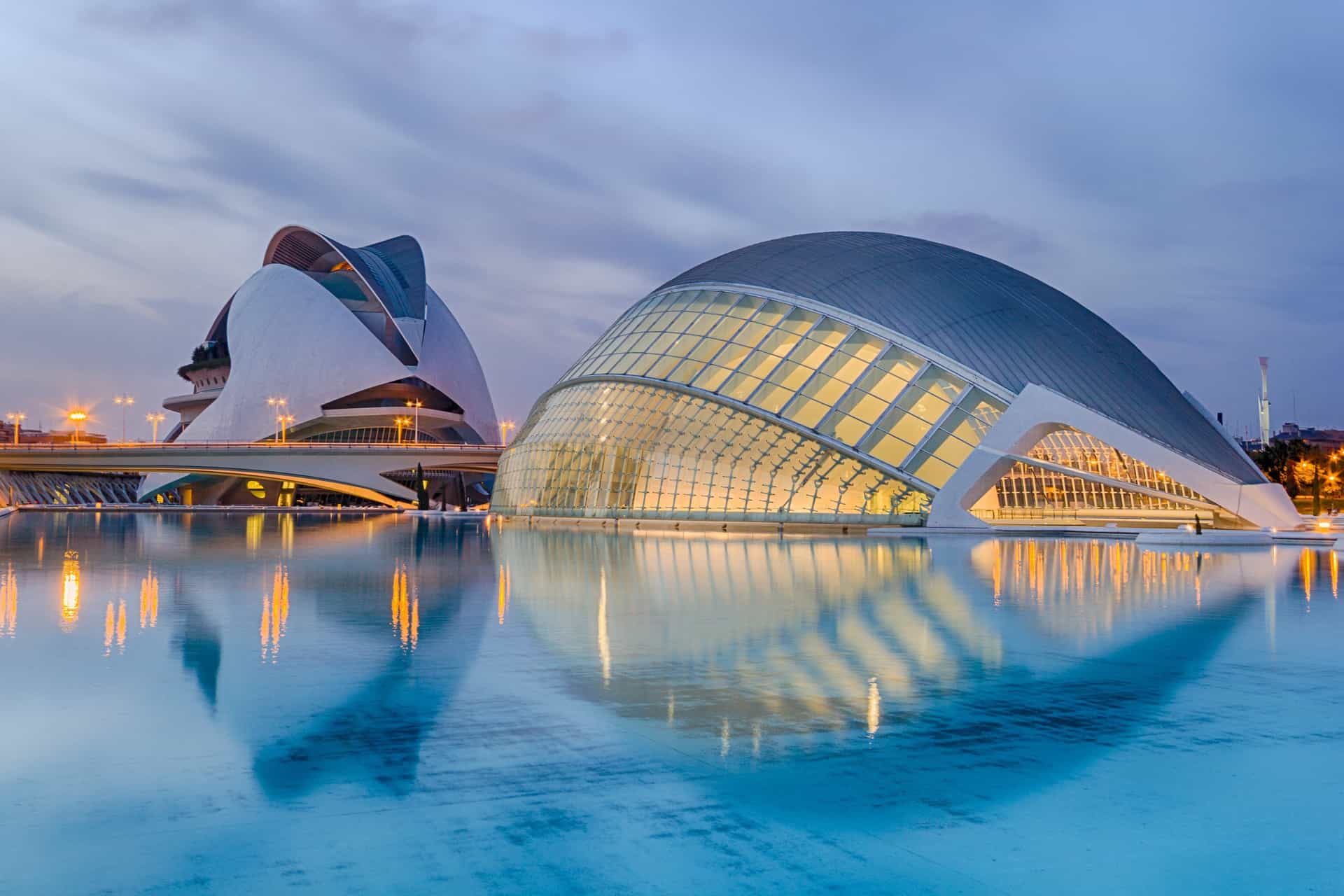 The city was founded by the Romans in 139 BC, it was opened by the Muslims in 714 AD and during the Islamic period, the city witnessed great prosperity and development in many fields. Valencia remained under Islamic control until 1238 AD and after that King Philip V announced the end of the existence of the Kingdom of Valencia and its annexation to the Spanish Kingdom.

Valencia is one of the important tourist destinations in Spain, where you can see many beautiful places such as a group of charming natural attractions in addition to another group of buildings with luxurious architecture. Also, it contains many historic monuments like the 15th century Silk Exchange, the 18th century Marquise Palace and the Museum of Fine Arts.

It was called the city of the hundred bell towers, the most famous one is the Gothic Miguelte Tower, which was built between the years 1381-1424 next to the cathedral. Now let us start our tour in the city to get to know the famous places there.

The weather in Valencia is different from other European cities, where the weather in summer is hot and dry and the temperature reaches 35 degrees at day and at night it reaches 25 degrees.

In winter, the weather becomes much colder where the temperature at daylight becomes 16 degrees and at night it’s 6 degrees and it becomes lower than 6 from December till February.

Things to do in Valencia

Valencia is one of the top-visited cities in Europe, many tourists come from all over the world to see its fascinating buildings and monuments and see the many beautiful places there.

That is what we are going to talk about in the coming part, the important places and things to do there weather with family and friends.

The Valencia Cathedral is one of the most important historical landmarks in Valencia City, and it is characterized by its architectural style derived from several civilizations. The cathedral was the site of an ancient Roman temple and then a Moorish mosque.

The cathedral was built in the 13th century, it is distinguished by its three doors respectively Romanesque, Baroque, and Gothic, and inside it has many works of art including two large religious paintings by Goya. The interior of the cathedral is a somber high vaulted space embellished with Renaissance paintings and elegant Baroque art and has an inspiring ambiance with its majestic domed ceiling and a rose window illuminating the space.

The Valencia Cathedral also has a museum inside it, which displays a prestigious collection of religious art. You can climb the bell tower over there and ring the old bell with its oriental Moroccan style. This place is worth a visit because it is one of the beautiful landmarks.

City of the Arts and Sciences

City of the Arts and Sciences is one of Europe’s most impressive centers dedicated to cultural and scientific exhibitions. It is the consistency of a group of buildings that are divided into five structures, and these structures have been divided into three areas, the technical, scientific, and natural fields.

The city was built by the famous architect Santiago Calatrava and Felix Candela. It has I max cinema which screens 3D digital films, and an interactive museum with exhibits about science, the environment, and technology, and the largest aquarium in Europe, it is a perfect destination for family and children while tourism in Valencia.

The Virgin Square is a historical landmark located in the center of the city, it is among the oldest and loveliest squares in Valencia City. The square dates back to the Roman era, and it is among a favorite meeting place for locals.

The square is bordered by several landmark buildings like Valencia Cathedral, at the center of the square there is an amazing fountain in the work of Valencia sculptor Silvestre Edeta. And most festivals are held there.

Oceanografic is a fantastic place you can visit, it consists of the largest aquarium in Europe, and it is a complex of several buildings, each dedicated to one of the earth’s most important marine ecosystems and environments.

The aquarium was opened in 2003, it has 500 different marine species represented by 45000 sea creatures, visible in nine towers that allow viewing as though visitors are underwater. The most beautiful of the aquarium is the tunnel, where visitors walk surrounded on both sides and overhead by swimming sharks, sea turtles, and dolphins.

Valencia Bio Park includes the Valencia Zoo in the north part of it, it was founded to be home for many animals and be as close to their natural life as possible and it contains a lot of African animals.

When you are at the park you will feel that you are already in Africa and you will see the animals in their original environment like in Madagascar, and Equatorial Africa. Inside there you will find many animals like lions, rhinoceros, and giraffes, and gorillas inside the forest located there, and crocodiles in the water.

The Archaeological Museum of La Almoina is located in a magnificent building near the cathedral, it gives you a look at the civilization that participated in Valencia’s heritage and excavations that were discovered between 1985 and 2005.

Inside the museum, there are the remains of the first settlements by the Romans like baths and streets and that is from the 2nd century. Also, there are a baptistery and the apse of a church. The excavated areas in Valencia are considered as one of the best archaeological sites in Europe and that is due to the artifacts that were discovered under the city of Valencia.

The Silk Exchange is a fascinating building that was built in the 15th century to house the city’s Silk Exchange and it was the place where the famous silk in the city was traded with merchants to be sold in all of Europe.

The building is a famous example of the Gothic architecture style in Europe, with its lovely and huge tower and the façade features nice decorated doorways and windows.

While you are there you can climb 144 stone steps of the tower staircase and see a magnificent view of the city from the top. The building is listed as a UNESCO World Heritage Site.

The Ceramics Museum is located near the Church of San Martin, it was the palace of the Marquis of Dos Aguas and it was built in the 18th century and it belonged to a noble family at that time.

The palace now is the home of the González Martí National Museum of Ceramics and it was opened in 1947. When you visit the museum you will see more than 5000 artifacts and pottery from Valencia and other cities surrounding it.

Also, you will find ancient Greek, Arab and Roman pottery, there are fine porcelains from China and Japan, and collections containing many pieces like works by Picasso.

The Central Market is one of the oldest markets in Europe and the most famous local market in Spain. The market was built in 1928, you will love the building’s art nouveau metal and glass design. The market contains hundreds of market stalls where vendors sell fresh fruits, vegetables, and food products.

The Torres de Serranos represents an ancient gate of the Old Town when the town was surrounded by defense walls, it is one of the most famous historical monuments in Valencia, and it consists of two towers. The construction dates back to the 14th century, it was built in 1392. Visitors can enjoy walking in the towers and learning about its history.

Valencia City is an important and charming coastal city, it is natural for tourism in Valencia to be beach tourism, with its resorts and stunning beaches containing coral reefs and diverse and rare marine creatures in attractive colors and you can practice fun beach sports such as fishing, and diving. And the popular beaches for tourists in Valencia are Playa de Malvarrosa ,de Levante and del Saler.

The Las Fallas Festival is a lively religious festival and a famous local tradition, it is a commemoration of Saint Joseph. The celebration of the festival dates back to the middle ages when the carpenters’ union burned their old things in the streets in honor of Saint Joseph.

The festival is held every year in March, it includes music, fireworks, and food. It is known for its creative installations, large floats featuring figures made of paper, and these creations are set up in the streets and then burned at midnight on the last day of the fiesta.

Your Travel Guide To The Best Of Warsaw, Poland