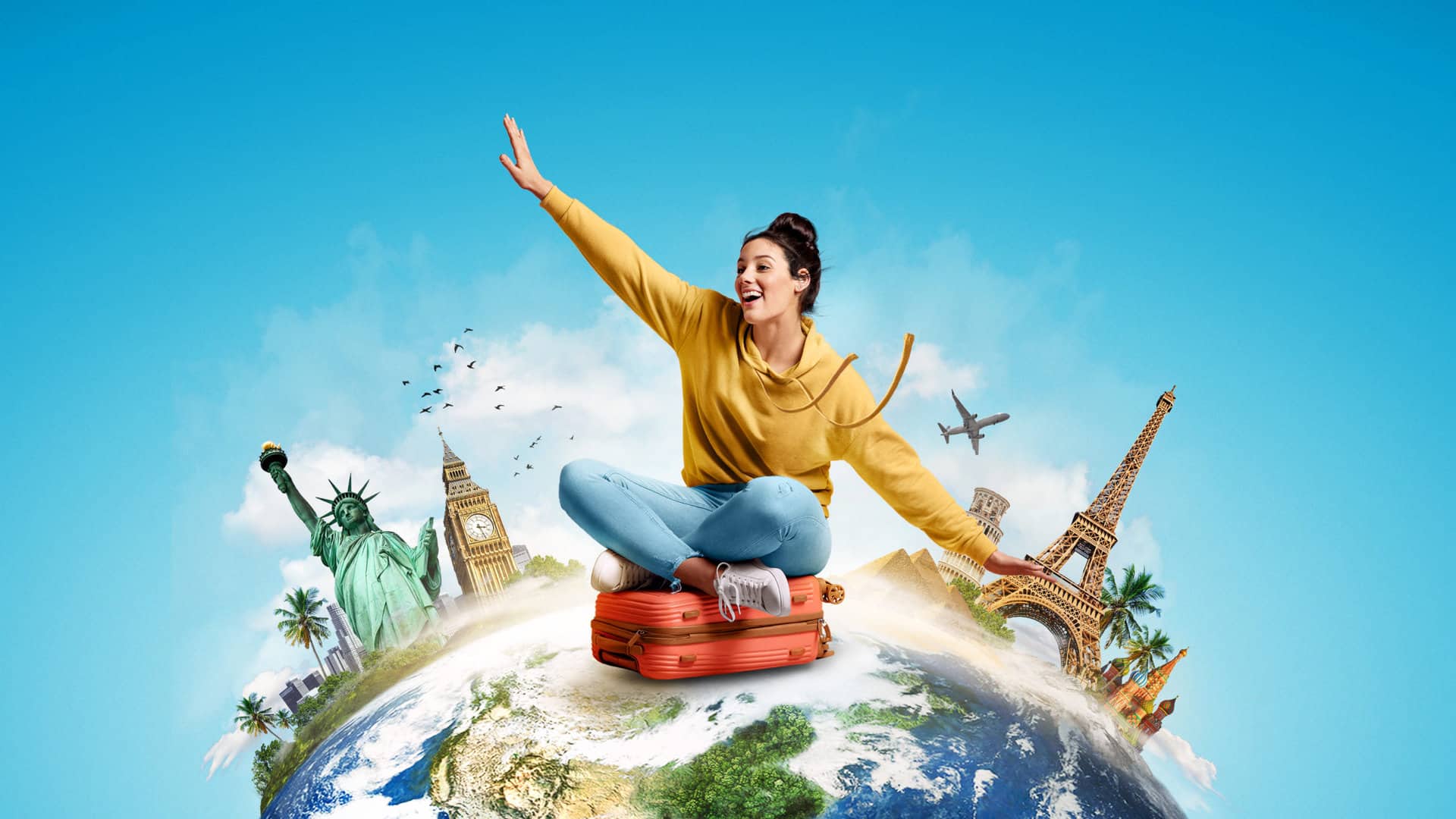 Tourism statistics are one of the most discussed topics around the globe. Tourism is basically travelling, whether for pleasure or business. Whether your travel is domestic (within your native country) or international, that falls under the industry of tourism as long as you spend less than twelve consecutive months in a place other than your main city. Tourism has been a source of income and economic development in many countries around the world. Even though the tourism industry has been changing because of political and global health issues, many people still want to travel, and it is a great source of income for many countries.

“Travel makes one modest. You see what a tiny place you occupy in the world.”

The United Nations World Tourism Organisation (UNWTO) has estimated that by 2020, the number of international tourist arrivals might decrease by 58% to 78% due to the outbreak of the COVID-19 pandemic. Although their estimation was approaching real numbers, the tourism industry has started to recover in 2021. Global tourism in 2021 witnessed a 4% rise over 2020. However, there are still challenging facts to overcome, as even this rise is still 72% less than the pre-pandemic numbers.

Global tourism is also responsible for 8% of global greenhouse-gas emissions. Those emissions, among other tourism impacts on the environment and society, may not always be in the best interests of local communities and their economies. That is why another term concerned with the notion of tourism has arisen, which is “sustainable tourism.” The UNWTO has promoted this term by introducing tourism as one of the 17 Sustainable Development Goals. This is a step that sheds light on the importance of tourism, not just as a source of income for countries and individuals around the world but also as one of the pillars of creating a sustainable economy.

Tourism is a very wide and popular notion. In this article, we will review some major tourism statistics. We will also take you on a tour of the best countries to visit for different tourism purposes around the world.

The tourism industry, as explained before, has a direct impact on countries’ economies. This is because tourism benefits other industries, such as the accommodation industry, local and international transportation industries, travel companies, restaurants, and so on. Globally, travel and tourism have contributed to the Gross Domestic Product (GDP) with approximately 5.8 billion US dollars in 2021. Though these numbers are affected by the pandemic outbreak in 2020, some countries in 2021 managed to receive a score of 5.2 points out of seven, making them the top countries in the Travel and Tourism Development Index (TTDI). These countries were Japan, the United States of America (USA), and Spain.

Japan is one of the most visited countries in the world. Tourism statistics in Japan recorded 3.1 million visitors in 2019. Even though the COVID-19 pandemic in 2020 had a big effect on these numbers, the country is quickly getting better.

Best Places to Visit in Japan and Things to Do

If you are into contemporary art and culture, then Tokyo would be at the top of your list of destinations in Japan. It has more than one site to satisfy your tourism plan, besides being one of the most astonishing cities in the world.

Before visiting Tokyo, it’s advised to plan ahead and buy your destination tickets to make sure that you have secured your place. Some of the places that you must see are the Imperial Palace and the Ghibli Museum. You should also make it a point to attend one of the sumo, kabuki, and Giants baseball games, for which tickets usually go on sale months before.

Are you one of the tourists who enjoy traditional experiences? Are you visiting Japan on your next holiday? Then Kyoto is one of the cities you have to include on your travel list.

Kyoto is known for its traditional cultures that date back thousands of years. You can find these cultures vividly presented in the many temples that are located in the city, like the Buddhist temples Kinkaku-ji and Ryōan-ji.

Kyoto is also known for its traditional culture of tea. Many elegant tea houses are found in different parts of the city. It is where you can also enjoy traditional music and dances. And do not forget to taste the city’s traditional and exceptional cuisine.

Japan is a place that never fails to satisfy all tastes. Therefore, if you are a fan of nature, you should make sure to spend some time in Yakushima.

Yakushima is home to one of Japan’s most primitive forests. It is the location of hiking trails leading to breathtaking scenery. You can also stop by the Yakusugi Museum to learn more about the importance of the ancient Japanese trees.

Tourism Statistics in the USA

Despite the decline in the number of international tourists that the USA receives annually due to the outbreak of the COVID-19 pandemic in 2020, the USA is still holding its place as one of the most visited countries in the world. Being a large country that occupies most of the North American continent, domestic tourism plays an integral part in the tourism industry in the country.

Best Places to Visit in the USA and Things to Do

Whether you enjoy nature, trying new cuisines, or visiting museums and sightseeing, San Francisco has something interesting for you. You can take a walk on the Golden Gate Bridge and enjoy the scenery on the most photographed bridge in the world. Then take a tour of the Palace of Fine Arts.

San Francisco is known for many popular parks to chill out in, one of which is the Japanese Tea Garden. It is the oldest Japanese garden in the city. The scenery and colours there are breathtaking.

If this is your first time in the United States, you cannot miss out on the opportunity to visit New York. It is one of the busiest cities in the world, located where the Hudson River meets the Atlantic Ocean. It is considered a cultural, commercial, and financial centre.

Top attractions in the city include Central Park, the Metropolitan Museum of Art, and the Statue of Liberty.

Who wouldn’t like the chance to see how their favourite film is filmed and in action? Los Angeles is the place where you can live that dream. This southern California city is the centre of the American film industry. It is where most of the famous studios like Paramount Pictures, Universal, and Warner Brothers are located. You might even join one of the behind-the-scenes tours they offer.

Top attractions in Los Angeles include Universal Studios Hollywood, not to mention the famous Hollywood sign. You can also visit Disneyland Park, which is a popular place, especially for children. Finally, you might want to visit the Los Angeles County Museum of Art, which includes works from pre-Colombian times to contemporary works of art. The museum is considered the largest museum in the Western United States and receives approximately one million visitors annually.

Spain is by far the most visited country in Europe. The country recorded 126.2 million visitors in 2019. It is recovering from the 2020 crisis rapidly and is expected to retrieve these numbers soon.

Best Places to visit in Spain and things to do

Barcelona is one of the most wonderful cosmopolitan cities in the world. It stands out with its art and architecture. The unique landmarks in the city will make your stay worthwhile, not to mention the delicious Spanish cuisine that you can try in the city’s restaurants.

Top attractions in Barcelona include famous landmark churches like La Sagrada Família and the Cathedral of Barcelona. For art lovers, you wouldn’t want to miss the Picasso Museum, which holds many of the artist’s artworks. Also, Barcelona is known for its sandy beaches, so make sure to spend a day on the beach during your visit. Last but not least, make sure to plan to book your ticket ahead of time in order to attend one of the football matches at the Camp Nou stadium in Barcelona. It will give you a once-in-a-lifetime experience that you would not want to miss.

Madrid is a beautiful Spanish city to visit. You can enjoy its museums, dine in its restaurants, or simply walk around its streets. Getting in touch with the locals in Madrid is a worthwhile experience.

Some of the places to visit in the city include El Retiro Park, the Thyssen-Bornemisza museum, the Museum of Illusions, and attending the art shows for free at La Casa Encendida.

If you are visiting Spain in the winter, Seville should be at the top of your list. It is one of the most famous cities for tourists to visit in the country. It has a wide range of cultural exposure and beautiful scenery.

Places to visit in Seville include the Tomb of Christopher Columbus, the Sevilla Museum of Fine Arts, and a flamenco dance show.

Explore the Idyllic Ring of Kerry - The Ultimate Travel Guide