Zurich, Switzerland: 13 Amazing Things to See and Do 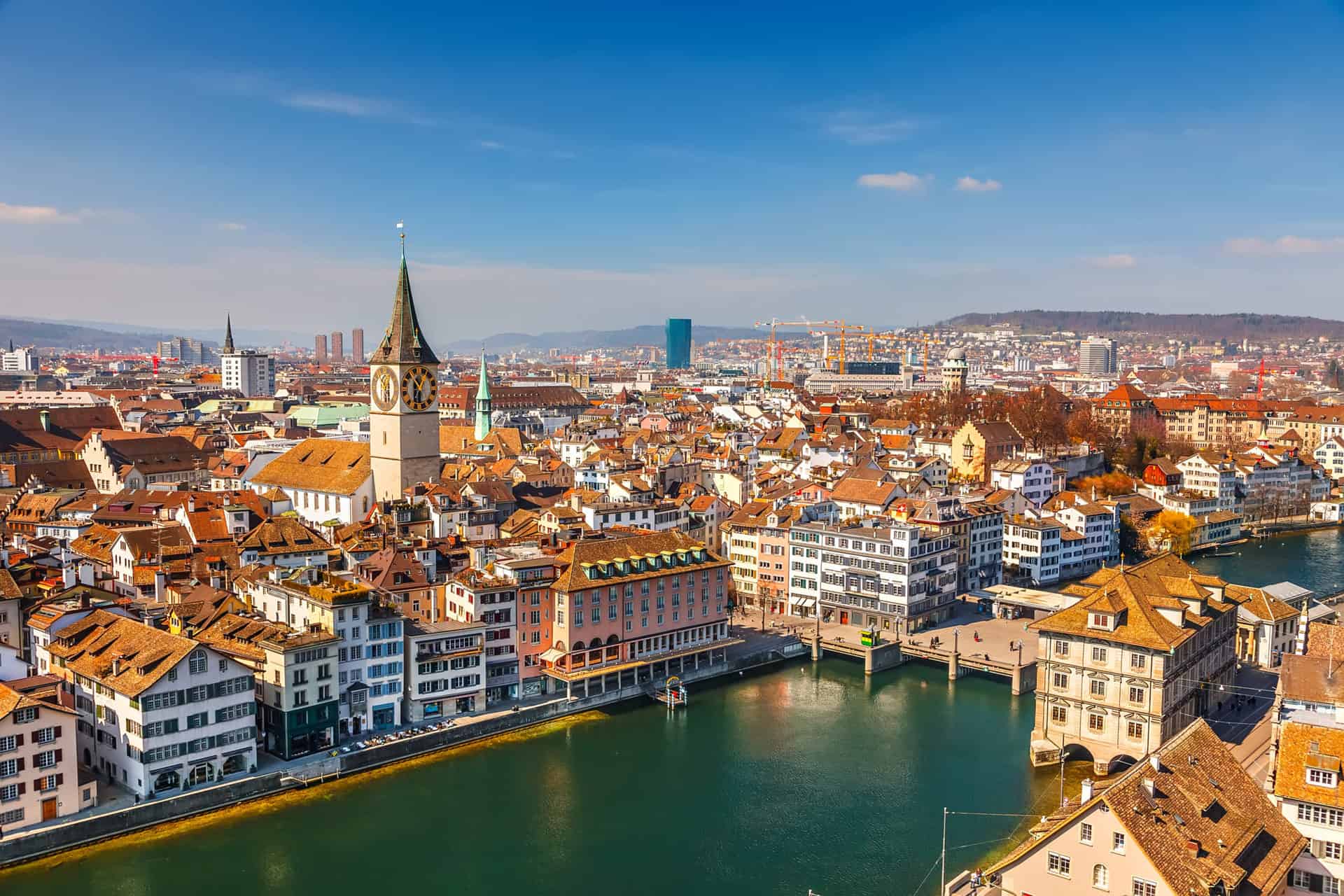 Zurich is located north of Switzerland near the border of Germany. It is about 30 km north of the Alps and it rises 408 meters above sea level. Zurich is well-known as the most preferred city to be visited in Switzerland by tourists. It is also known as the capital of luxury chocolate! In addition to that, it has many cultural sites, mountains, lakes, jewelry, and elegant watch shops.

The history of Zurich dates back 2000 years to the Romans and the city was called Toricum in the year 15 BC. The city of Zurich was featured by being named the best city in the world for eight years. It also offers the best and finest living, economic, cultural, and tourism services around the world.

When you visit Zurich, you can enjoy the beautiful nature by seeing the snow-capped Alps, swimming in the lake, relaxing on the sands of the river, and walking to the Uttliberg, which is one of Zurich’s high mountains. Also, there are many festivals held there like Zurich Film Festival. The city is full of cafes and places of entertainment that offer reading, theatre, poetry, and sports activities.

Zurich also contains an international airport that offers flights to 150 destinations around the world. There are many institutes, universities, and cultural centres like the Swiss Federal Institute of Technology, which was built in 1855. The city also offers tourists a variety of sites, including 50 museums, and 1,000 exhibitions of art, international brands, and fashion shops.

Now, let us start our tour in this beautiful city and know more about it and the places you can visit there.

Things to do in Zurich

The city of Zurich is one of the most beautiful cities in Europe. It is worth visiting to explore all its attractions. In this article, we will get to know the famous places there.

Lake Zurich is one of the famous places to visit in the city. The shore of the lake is lined with parks where locals or even tourists can have a picnic, jog, and swim in the lake. It covers an area of 88.66 square kilometres and has a depth of 136 meters, with a length of 40 kilometres.

You can take a cruise and see a wonderful view of the Glarus Alps from the lake. From there, you can find a cruise that takes you to Burkliplatz. On the east side of the lake, you will find the City of Flowers, where you will find more than 15000 flowering rose bushes of more than 600 different species.

Also, you can see there a castle dating back to the Middle Ages, the largest indoor water park in Europe, the wooden pedestrian bridge across the lake between Rapperswil and Horden, the Baroque church, and many other places.

The Swiss National Museum is located in a castle in the city of Zurich. It shows you the culture of Switzerland and it contains artefacts that were discovered through the ages in Switzerland. The collections include metalwork, jewellery, watches, musical instruments, and costumes.

There are also paintings from the Medieval ages and a collection of stained glasses. Inside the museum, there are four themes displayed. They are early migration and settlement, religious and intellectual history, political history, and the economic development of Switzerland.

Bahnhofstrasse is the main and famous shopping street in Zurich and Europe. You will love walking in the street and seeing the beautiful buildings dating back to the 20th century, with trees and fountains surrounding you. The shops on the street sell many things like jewellery, fashion, and luxury brands like Chanel, Gucci, Prada, and others.

In December, the street is always crowded when the Christmas decorations are out. In the middle of the road, you will find a transportation system which is the tram. The buildings in the street are truly amazing and give the street a magnificent look. Some of these buildings are the Hotel Baur en Ville which was built in 1838, the Weber building, and many more.

It is located between Bahnhofstrasse street and the left bank of the Limmat. This is the place where the Romans built a fortress in the 4th century to defend against the migrations from the north. After that, there was a palace built there as a royal residence.

Although Lindenhof is a quiet place, there are many important ceremonies that are held there. In 1798, it was the place where the oath confirmed the Helvetic Constitution. When you visit the place, you can enjoy the view of the river and the old town.

Zurich Zoo is the place where you can find more than 360 kinds of animal species and it is one of the most famous zoos in Europe. The lovely thing about the zoo is that the animals live as close as they can to their environments like snow leopards amid the rocky Himalayan landscape, penguins swimming in chilly water, and many more.

When you visit the Zurich Zoo, you will find that it contains 4000 animals representing 340 species and you will be fascinated by what you will see in the zoo.

It is one of the main attractions in Zurich, standing with its two towers. It was built between the 11th century and the 13th century and it is a Romanesque building, with a three-aisled galleried basilica. The two towers there were built in 1487 and the dome at the top of the church was built in 1782.

The oldest part of the church is the crypt and it has faded frescoes from the 15th century. When you visit the church, make sure to see the two modern bronze doors, sculptured Romanesque capitals, the remains of Gothic wall paintings, and the Late Romanesque cloister.

It is one of the top fine art museums in Europe. It contains art collections from the 12th century till the 20th century and many collections of famous artists. You will love Swiss art and you will see many works by symbolists like Ferdinand Hodler and Romantics such as Henry Fuseli and other works by Van Gogh, Picasso, and many more artists.

St. Peter’s Church is located south of Lindenhof and it is part of the Old Town. The church stands on a hill on the west bank of the Limmat River and it is the oldest parish church in Zurich.

When you visit the church, you can see the Romanesque choir under the tower that is dated back to the 13th century and also you will see the Baroque nave with three aisles. In 1538, a clock was built in the tower of the church. It is 8.7 metres in diameter and it is the largest church clock in Europe.

One of the most famous buildings in the city is the Zurich Opera House which was built in the 19th century by the Viennese architects Fellner and Helmer. Before you enter the opera, you will see famous figures on the façade like Shakespeare, Mozart, and many more.

Zurich Opera House holds more than 250 performances a year by many stars and it won the prize for Best Opera Company at the International Opera Awards in 2014.

The FIFA World Football Museum opened in 2016 in the Enge neighbourhood. It is a sports museum and consists of three floors and it is the perfect place to visit for football lovers.

Once you enter the museum you will see everything about the early days of football and the documents about every World Cup since 1930, such as the World Cup trophy. You can also watch more than 500 videos about the game and children can play football games in the museum.

Rietberg Museum is a magnificent villa located in Zurich. It was built in 1857 for a German industrialist and it used to serve as a place where Zurich intellectuals used to meet.

It is known as the only non-European art museum in Switzerland because it contains Indian sculpture, Tibetan temple pictures, Chinese grave decorations, and Asian ceramics and jade. Also, there are things from other continents like African carvings and masks and art collections from North America.

Farumunster is a church and its name means “Woman’s church” referring to the abbey that was built there in 853 for the aristocratic woman of Europe. The church is a three-aisled basilica with a Gothic nave built from the 13th to the 15th centuries and there is also a Romanesque chancel.

Uetiberg is the best place where you can have a fascinating view of Zurich, the lake, the river, and the Alps Mountains. It is located southwest of Zurich and since 1875, it got possible to reach the top by train.

When you reach the top, you will find a walkway that is lit at night. There is also a glass-enclosed restaurant that gives you a lovely view of the city at night, and in daylight, you can see from a lookout tower the Valais, Bernese and Glarus Alps.

10 Fun Things to Do in Florence With Kids

Traveling to the Austrian Capital, Vienna? Take our Virtual Tour!