Exploring Olympia: The Birthplace of the Olympic Games 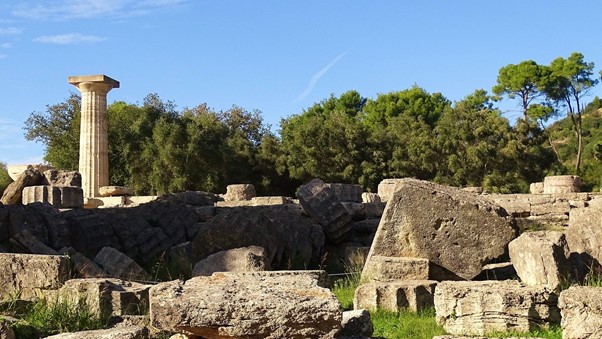 While most of us think of Athens and the beautiful beaches of Mykonos when we hear of a trip to Greece, few would appreciate the history of the birthplace of the Olympic games, Olympia. History lovers and mythology enthusiasts would truly not want to miss this amazing and history-rich destination.

Though the Olympic games we see now in our modern day are worthwhile, the Olympic games of the past were much more intense. While standing on the Stadium’s remnants, we could swear that you would feel the vibes and enthusiasm from back then.

The Games were to celebrate the Greek gods and goddesses, especially Zeus. The Games were held every four years, from the 8th century B.C. to the 4th century A.D. Only men were allowed to participate back in the day and were not… well… fully dressed. They came from all over Greece to participate in the games and the winner of the games was almost on the level of a Greek god. The first modern day Games were held in Athens in 1896 and since 1994, the Games have been divided into the Summer and Winter Olympic Games.

Now that we have ingested some history about the Olympic Games, let’s explore the historical buildings of Olympia! Wear your most comfortable shoes for this historical journey.

The ancient stadium of Olympia is where the Olympic games took place. There were also the games held in honour of the goddess Hera, where women took part in. The official entrance of the stadium is called the Krypte. The athletes and judges used to enter through it. Mud seats were made for spectators and judges, who were known as hellanodikai, were the only ones allowed to sit on stone seats. The stadium has an estimated capacity of over 20,000 spectators. The racetrack of the stadium is about 200 metres long and nearly 30 to 34 metres wide, which allowed a lot of athletes to participate.

The temple of Zeus was built in honour of the Greek god Zeus. Construction of the building took place in 470 BC and was completed some time before 456 BC. The temple is a hexastyle temple with thirteen columns supporting it. The temple is considered by many the perfect example of the Doric architecture.  It was home to one of the Seven Wonders of the ancient world, the statue of Zeus, that was created by Pheidias in 430 BC. Though the temple was ruined by fire and earthquakes a long time ago, it still remains one of the most important monumental temples in Greece.

The temple of Hera was dedicated to worship the Greek goddess Hera. It is one of the oldest temples in Greece and was built in the 7th century. It was originally built out of wood but later replaced with stone. The Olympic Flame is lit at the altar of the temple of Hera and carried around from there to all around the world until it finally resides at the country that the Olympic Games are being held in.

This region in the Altis of Olympia was a circular memorial that contained statues of Philip’s family. These include Philip himself, Alexander the Great, and Olympias. The area was made in celebration of the victory of Philip’s in the battle of Chaeronea. This is the only structure that was created in honour of a human in the whole Atlis.

The Palaestra at Ancient Olympia will definitely catch your attention. That is the place where Greek athletes used to practice wrestling and boxing in the old days. The building was built in the Doric style, like the temples of Zeus and Hera. Though excavations have been done by a German archaeological team, they restored just a little bit of the building and columns. However, it is still a great area to walk through and picture how the athletes of the old days used to train till they break in sweat.

Museums are the best during a historical visit, especially in Greece. The Museum of the History of the Olympic Games was the first archaeological museum in Olympia and presents to the visitors the long history of the Olympic Games. It also holds findings and ruins related to the period when the ancient Olympic Games took place. It was first established in 1886, but due to damages caused by an earthquake in 1954, it was rebuilt and was officially opened to the public in 2004. History fans will love the ancient findings that some of them date as far back as the second millennium BC. The museum definitely brings more insight to our understanding of the ancient Olympic Games.

Iraq: How to Visit One of the Oldest Lands on Earth

Best Ways to Explore the Beauty of Trinidad and Tobago