Close X
Home/Culture/Normandy: 15 Stunning Things to do in the Region of Beauty and History

Normandy: 15 Stunning Things to do in the Region of Beauty and History 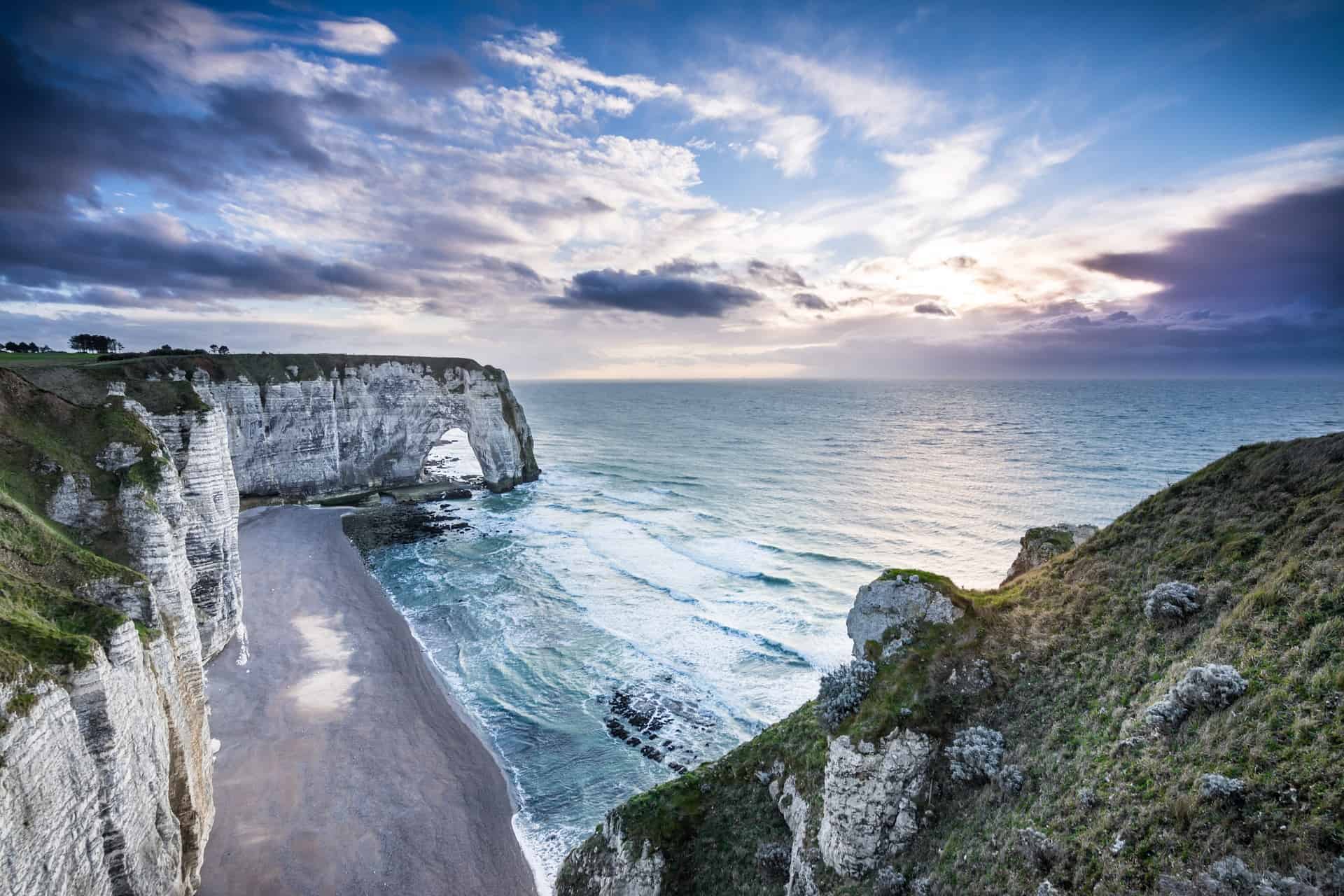 Normandy has about six cities which are Le Havre, Caen, Rouen, Cherbourg, Evreux and Dieppe. Normandy became more famous after World War II when the largest military landing took place on its beaches on June 6, 1944.

Aside from its long history and ancient sites to visit, you will enjoy many activities, like fishing and sailing. It is also famous for its cuisine, especially cheese, such as Camembert, and also its local cider.

The weather in Normandy is moderate. Its summers are short and while the winter is long. Usually, the best time for tourists to visit Normandy is from June till September.

How to Reach Normandy

If you go to Normandy by plane, then you will take off from Paris to Rouen or any other city in Normandy. If you want to go by train, then take it from Paris from Saint-Lazare train station to any of the cities in Normandy. By ferry, you can take it from Portsmouth, if you are in England and it might be the quickest mode of transportation for you from there.

Things to do in Normandy

After we’ve learned a little bit about Normandy it is time to take you on a tour to see and discover the beautiful part of France and its history, nature, and cities, as well as what to do in this famous region.

Mont Saint-Michel is a UNESCO World Heritage Site. It is 1 km away from the coast of France and it is a small rocky island in Normandy. Mont Saint-Michel is one of the famous attractions to visit besides the Louver Museum. At the top, about 100 meters up, you will find the Abbey of Saint-Michel. You can take a 200-meter path and then 350 steps to reach it.

The abbey was built in the 12th century. It has a serene Romanesque sanctuary and a glorious Gothic choir and from there, you can take the stairs to a terrace to see a magnificent view of the sea. When there is a low tide, you can walk around with a guide, but during high tide the place becomes an island and it is accessible by one road only.

Honfleur is one of the most famous cities in Normandy and Europe. It has wonderful cobblestone streets and many old half-timbered houses. Honfleur is famous for its old port from which trips to Canada started in the 16th century. Another attraction located in the harbor is the Maritime Museum which will teach you about the history of fishing and shipbuilding in Honfleur.

There is also the Eugene Boudin Museum, which is a good choice for art lovers. It contains paintings and drawings of scenes of the Normandy coastline. There are many other attractions to visit in Honfleur besides these two museums and you will love being there and spending a great time in Honfleur.

Etretat Cliffs are located near the town of Etretat on the coast of Normandy. It is 90 meters high and the beaches there are amazing in the summer. French artist Claude Monet was inspired by the place and spent the winter of 1868 there and painted the beautiful landscape and the sea.

Omaha Beach is the place where the US, British, French, and Canadian troops landed on June 6th, 1994, to liberate France from the Germans and it was called the Battle of Normandy. Omaha beach extends for more than 10 km, and it saw the bloodiest fight in history and many soldiers died there.

When you visit the beach you will see the American Cemetery, which contains more than 10,000 gravestones and it’s the biggest in Normandy. Also near Omaha Beach, there is the Overlord Museum, where you can see the history of the war and the liberation of Paris. The museum contains tanks, guns, personal items of the soldiers, and many other things.

The city of Caen played an important role in World War II in the liberation of France. More than half of the city was destroyed in the war but its historical churches weren’t destroyed. Caen Memorial Museum, which was built in 1986, will teach you a lot about the war and the Battle of Normandy.

There is a memorial which contains three gardens for the Allied Forces in the battle of Normandy and it opened in 1988. It also contains gift shops, cafes, and restaurants.

Chateau de Fontaine-Henry is one of the most beautiful to visit in Normandy. It is located about 14 km away from Caen and it was built in the 13th century. In the Renaissance era, the chateau had some extensions added to it, showing great examples of Gothic and Renaissance architecture in its stone façade. When you enter the chateau, you will see its beautiful furniture and paintings and you will also find beside it a chapel built in the 13th century.

A forest surrounds the building, with a walking path and three gardens. These gardens are planted with vegetables, and the Hortus Conclusus for religious meditation and spiritual reflection, and the Gerbe du Parnasse garden.

The old town of Rouen is a magnificent destination for tourists, where you will love the historical ambiance, the winding cobblestone lanes and architecturally beautiful buildings. In Rouen, you will see one of its top attractions, the Museum of Fine Arts which is known as one of the top museums dedicated to fine arts in France.

Also, there is the famous Cathedral Notre-Dame which is an hour from the town. It was built in the 11th century and it was in some of Claude Monet’s paintings that show many details in the cathedra’s façade at different times of the day. Another great site to visit in Rouen is the famous astronomical clock which is one of the oldest in the country.

This is another memorial museum located in the town of Bayeux. There, you will see an overview of wartime and an explanation of the battle of Normandy and D-Day on 6th of June and until the liberation of Paris on the 25th of August in 1944.

Inside the museum, you will see many types of equipment used during the war, such as guns and jeeps and also you can watch a movie created by World War II historians explaining everything about the war, including the battle of Normandy.

Chateau de Caen was built by the King of England, William the Conqueror, in 1060 and it is one of the largest medieval monuments in Europe and has an important place in Caen’s heritage. It was a royal fortress and then became an English stronghold in the Hundred Year’ War and it was also an army barracks during World War II.

When you enter the chateau, you will find out that there is a museum which is called Normandy Museum and it is about Normandy’s history and culture. Also, you will find inside many great collections of paintings dated back from the 16th and 17th century.

Fecamp is the perfect place to spend your vacation in Normandy. The city was built in 1832 and it was one of the first seaside resorts in France. While you are enjoying your vacation there, you can visit the old Abbey Church of Saint-Trinite, which was built between the 12th and the 13th centuries and the interior is large with a wonderful choir and Renaissance altar. At the north of Fecamp, there is the chapel of Notre-Dame du Salut and it is located on a high cliff.

Dieppe is a famous seaport, known as the most stylish seaside resort since 1924 when the Duchesse de Berry transformed the town by building a ballroom and a theatre and made it an important destination for tourists.

One of the nice places to visit there is the Chateau de Dieppe, built in the 14th century, and it contains the Dieppe Museum which includes a lot of paintings from the 15th century till today. Also, there are two churches which you can visit: the Baroque Eglise Saint Remy and Eglise Saint-Jacques.

Every two years, especially in September, the International Kite Festival takes place there. Besides that, you can also enjoy many activities like sailing, fishing and playing golf.

Claude Monet was a famous French artist who lived in a house in Giverny from 1883 to 1926. This house is now a museum including his home and studio and it is just one hour away from Rouen.

If you are an art lover, you will like going there and exploring his house from the kitchen, bedroom, dining room, and sitting room. Also, there are gardens where you can see the sunflowers, wisteria, water lily pond, and Japanese footbridge.

Arromanches is a town located in the northwest of France in the Normandy region and it is near Omaha Beach. It was captured by the British Forces in 1944, by installing the artificial harbors and that was because the town didn’t have a natural harbor.

The museum shows you the logistics and technical aspects of Operation Mulberry that took place there and shows you how the harbor was built. Also, some models show you how this harbor was operated and you will find many cafes and restaurants near the museum in a square called 6 June.

Deauville is also one of the best seaside resorts in Normandy. It is one of the top spots to visit in France and it features 2 km of sandy shoreline and that includes places to rent parasols and lounge chairs. You can do many activities there, like sailing, golfing, and equestrian competitions. Deauville is famous for its events like the International Polo Championship and the Deauville American Film Festival.

Evreux is about one hour drive from Rouen, one of the famous attractions there is the Notre-Dame Cathedral which was built in the 11th century. When you visit the cathedral, you will see its monumental nave which still has Romanesque-era arches and it was rebuilt again in the 13th century in the Gothic style.

There is also the Episcopal Palace, which was built in the 15th century and now it is the Museum of Art, History, and Archeology and it contains paintings from the 17th till 19th centuries. You can also marvel at the magnificent Clock Tower that was built in 1490.

15 Best Things to Do in Colombia for an Unforgettable Trip