Antalya: 14 Amazing Things to Do and See 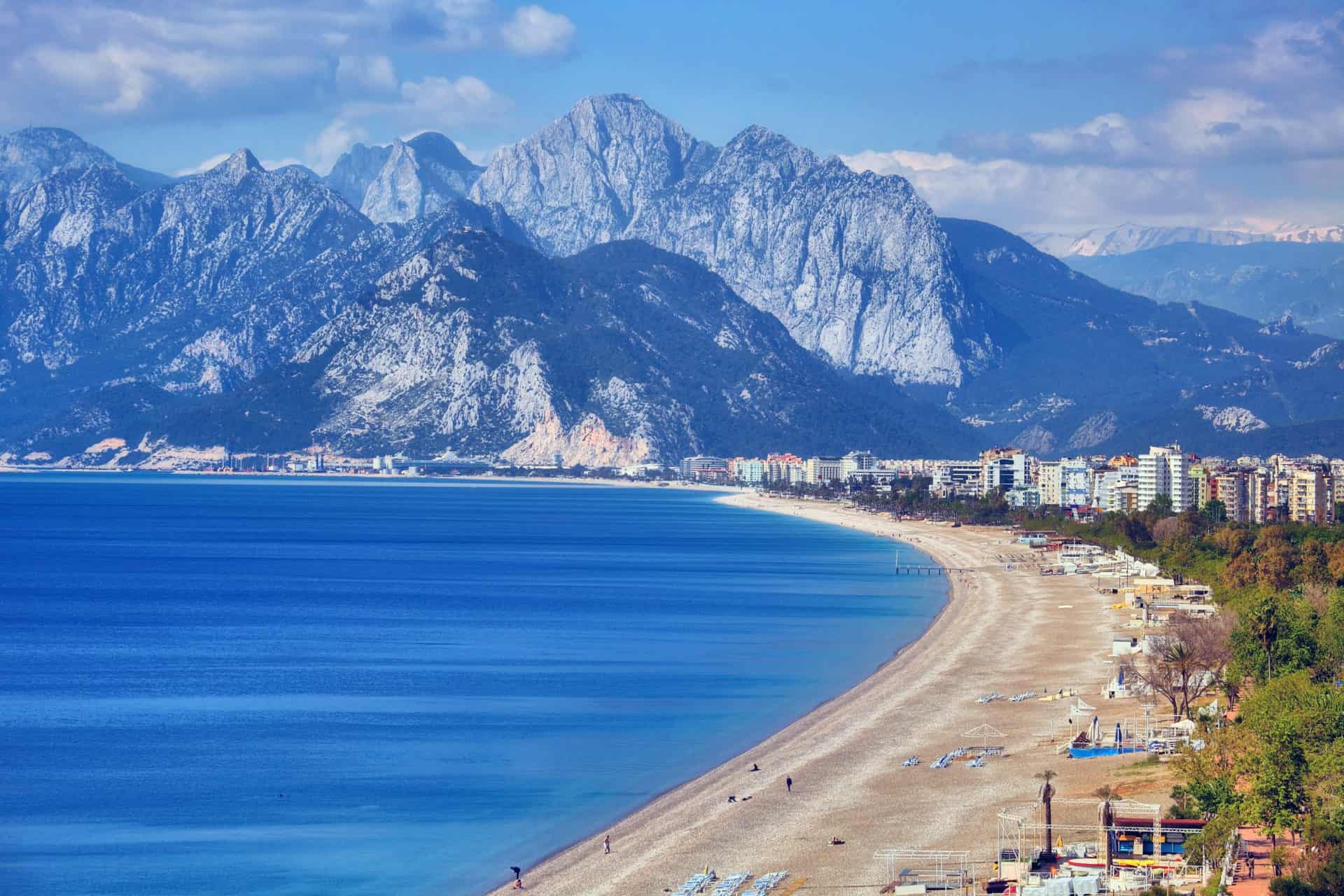 Antalya is a beautiful city located on the coast of the Mediterranean in southwestern Turkey. It is such a charming city and a top attraction for many tourists from all over the world. Antalya is located about 700 km away from Istanbul. It is the largest international sea resort in Turkey and is bordered by the natural Taurus Mountains. Antalya is a splendid city that is famous for its ancient history, beautiful nature, and blue sea.

When you visit Antalya, you will see that schools, mosques, caravanserais, Turkish baths, and cemeteries give the city a Turkish Islamic character. You can visit the city in any season of the year but we recommend the summer season for a nice stay.

The weather in Antalya is hot in summer and mild and rainy in winter. The average temperature in summer is between 16 and 27 degrees and that makes it a perfect destination for tourists at that time. During winter, you will feel that all four seasons are gathered in Antalya and that makes it the focus of attention for those interested in winter sports on the snowy heights of Antalya.

Things to do in Antalya

After knowing some information about Antalya, let us see more about the top attractions in the city and things to do there and discover the beautiful city and its beaches, landscape, and buildings. So pack your bags and take your seats to start our journey in Antalya!

The old town is one of the top attractions in Antalya. It is like a maze when you walk through it and you will see Ottoman houses lined up in its cobblestones. The houses and mansions there are homes for hotels, restaurants, shops, and art galleries.

When you are in the old town there are several places you might visit, the main square which contains a fortress gate and a stone clock tower, also you will see the mosque of Tekeli Mehmet Pasa that was built in the 18th century and has a great interior design.

There is a truncated minaret which is a famous spot in Antalya, it was destroyed in the 19th century and this was what was left from the building after it was at first a Roman temple, then a Byzantine church, and then a mosque.

The Antalya Archaeological Museum is the perfect place for everyone interested in Turkish history, it is one of the best museums in Turkey and it displays many finds from excavation sites across Turkey.

There are more than 5000 pieces that you can see in 13 halls spread in the museum. These pieces show you every period from prehistory to Greek, Byzantine, Roman, and Ottoman eras. The artifact there contains coins, jewelry, statues, and figurines. In the statuary hall, you will see Mythological figures dated back from the 2nd and 3rd centuries like Zeus, Hecate, and Artemis.

Hadrian’s Gate is one of the main gates to enter the old town, it was built in the 2nd century BC and it was built to mark the visit of Emperor Hadrian to Antalya in 130 AD. The gate has three arched marble gateways, between which are four columns on each side.

When you visit the gate you will see that it is flanked to the north and south by defensive towers and it was built in the Roman era. Also, you can see the entablature over the arches and you will be inspired that it still keeps its original rosettes.

The city of Perge is located 15 km east of Antalya, it was in the past the capital of ancient Pamphylia and it was ruled by Greek, Romans, Persians, and Athenians. In the city lived Apollonius of Perga in the 2nd century BC, who was a famous astronomer and geometer at that time and he defined the geometric terms.

In the last few years, many excavations took place there and this resulted from the discovery of the Roman theatre, the agora and its intact pillars, Roman baths, the wrestling school, the city gates, and much more.

Termessos is located 34 km northwest of Antalya, specifically in the Taurus Mountains and it is one of the best-preserved ancient cities in Turkey. Its location made it survive through the years and was unconquerable and Alexander the Great surrendered in the 4th century BC.

In the city, there is a theatre and behind it, you will find a high place which is a monolithic peak of Mount Solymos and you can enjoy a lovely view of the Pamphylian plain.

Antalya Aquarium was opened in 2012, there are more than 60 themed and labeled tanks and when you reach the aquarium you will be able to walk through 131 meters of glass tunnel. You can go in the early morning to see the staff feeding the marine.

There is also the Snow World which is 1500 square meters and the temperature inside there is -5 degrees. Also, you will find the Wild Park which is a tropical space containing crocodiles, frogs, and snakes.

Konyaalti Beach is located east of Antalya about 7 km from there, it is one of the most beautiful beaches in the city and behind the beach, there is a fascinating view of the mountains.It is a perfect place for you to relax and enjoy the day while being on the beach with a mix of coarse and pebbles and the beach has moderate surf.

At the beach, you can rent an umbrella, swim in the sea and do many activities. Also, you will find toilets, shower facilities and behind the beach, there are palm trees and a line of restaurants, shops, and cafes where you can have a meal with the lovely view around you.

The old harbor is such a beautiful place to visit, where it is full of cafes, boutiques, bazaars, and the yachts spread all over the harbor and look at the Mediterranean Sea. The harbor is surrounded by the old city walls, trees and it is the starting point for boat trips to many tourist attractions like Duden Waterfalls.

The old harbor was once the main economic center in Antalya, which was from the 2nd century till the 20th century bringing trade to the city and surrounding region. Nowadays, the harbor is a place where you can relax and enjoy the sunset while drinking coffee or having a meal.

Yiliminare Mosque was built by the Anatolian Seljuk Sultan, Kayqubad I, it was destroyed in the 14th century and reconstructed again after that. The mosque was announced as a UNESCO World Heritage Site in 2016 and it is until today in use by Muslims to pray. The mosque is one of the top attractions in Antalya; its minaret is a magnificent example of Seljuk architecture and it is 38 meters high.

Aspendos is located 47 km away from Antalya, there you will see a Roman theatre that was built in the 2nd century BC and can seat 12000 people. In September, there are events held there for the Aspendos International Opera and Ballet Festival.

Also, you can visit the Aspendos, Perge, and Manavgat Waterfalls which are near attractions. While you are there you can see the Roman ruins of Aspendos and the Roman Bridge on the Eurymendon that was built in the 13th century.

Karaalioglu Park is located near the old town on a cliff and you can see a magnificent view of the Gulf of Antalya. When you reach there you can have a walk and sit at the terrace and have a cup of Turkish tea while seeing the view of the Mediterranean Sea.

The park also is full of cafes, a playground for children, a municipal theatre, and the historic Hıdırlık Tower. There you can find a Roman base from the 2nd century and on the top of it is an Ottoman cylindrical tower.

Kursunlu Waterfall is located northeast of Antalya, it is one of the tributaries of the Akdu River and it is in a 600-hectare natural park. The waterfall is surrounded by pine forest and you can have a long walk there. Also at the entrance of the park, you will find a picnic area and many restaurants and you can reach the park by taking a bus from the center of Antalya.

The Roman Fortress was built in the 2nd century, it is a 14-meter high tower and it overlooks the old harbor and Karaalioglu Park. The fortress is like a watchtower that overlooks the harbor below it. From there you can watch the sunset and a lovely view of the harbor.

Lara Beach is located south of Antalya, with white sand and beautiful blue water and it is famous for its cafes and restaurants. Lara Beach is the perfect place for friends and families and it is a great tourist attraction. There you can watch the sunset behind the mountains across the gulf and it is the place where most of Antalya resorts are located.

Things to do in Madrid for an Enjoyable Holiday

Switzerland 101: The Best Places To Visit In Switzerland