Things to do in Madrid for an Enjoyable Holiday 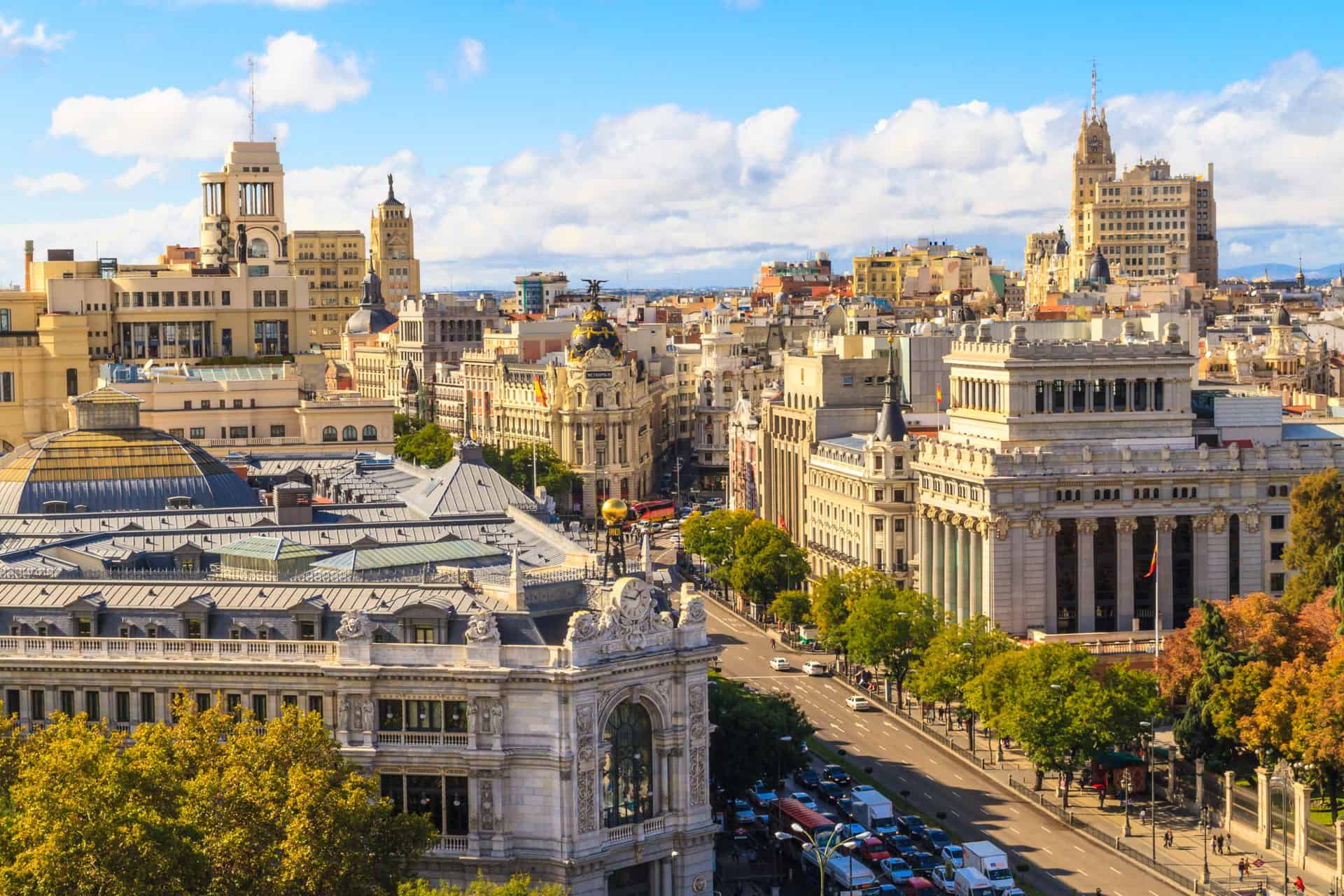 Madrid is the capital of Spain and the largest city in the country. It constitutes the technical and financial center of the state and it is located on the banks of the Manzanares River in central Spain.

Madrid is one of the top tourist attractions in Europe and the world. It was one of the largest colonial countries around the world, which made King Philip II establish Madrid as the capital of the country in the 16th century. During the 20th century, it became one of the most important industrial cities in Spain, although most parts of the city were destroyed during the Spanish Civil War between 1936 and 1939.

Philip II gave attention to Madrid during his reign and it became an important center surrounded by monasteries, churches, and public buildings. Madrid is the most visited city in Europe, it is a very attractive city and from there it is a starting point for many tourists to start their tour to any place. The streets of the city are always crowded with cafes, restaurants, bars, and clubs, also there are world-class museums, festivals and cultural activities that you can do there.

It is also the official residence for most of the kings of Spain as it contains the Royal Palace of Madrid, the huge Royal Theater and the opera theatre, national library, and many many historical places that we will know more about in the coming lines.

Before knowing more about things to do in Madrid or the places to visit, let us know about the weather in the city and the best time to visit it.

The seasons that attract most tourists and visitors are in the spring and fall, which are the mildest times of the year in Madrid.

Things to do in Madrid

The beautiful city of Madrid is full of many spectacular places to visit and see, in the coming line, we will get to know more about these places and what you can do there so let us start our tour.

The Royal Palace of Spain was built by Philip V in the 18th century, it is one of the famous attractions in Madrid and it is the official residence of the King of Spain and used for official state events.

The façade was made entirely from granite and white columnar stone and the façade columns are made of drawings by Bernini originally intended for the Louvre in Paris. When you enter the palace you will see the staircase at the entrance that is decorated with a fresco of The Triumph of Religion and the Church.

There are many rooms to see inside the palace like the Throne Room which includes valuable tapestries, mirrors, furniture, and chandeliers, and also there is the Royal Armory that contains 3000 exhibits dating back from the Middle Ages that show you weapons and armors that were used by Spanish Kings.

Another top attraction museum to visit in Madrid is the National Archaeological Museum, it was built in 1867 by Queen Isabella II and it is full of many art collections from the prehistoric era till the 19th century.

Prado Museum is one of the most famous art museums in the world, it contains more than 8000 paintings, 700 sculptures, and 2300 pieces are located in 100 rooms of the museum and spread on three floors.

You might not be able to finish seeing the museum in one visit and that is due to the many rooms located there. There are many collections to see there like Spanish paintings from the 12the century till the 19th century and you will see many paintings by Francisco de Goya which are about 140 works. Also, you can see collections like The Annunciation by El Greco, Jacob’s Dream by José de Ribera, and much more artworks.

It is a grand square located in the middle of the city, it was named after the sun sign on the old city gate and it aligns with the rising sun. The square witnessed many historical events like the Spanish resistance to Napoleon in 1808 and Second Republic was announced here in 1931.

The square is full of shops, cafes, and restaurants where you can sit and enjoy your time with friends and there is also a clock located on the top of the Post Office building there and from there the countdown of the New Year’s Eve takes place.

The Egyptian Temple of Debod is located in La Montana Park near the Royal Palace Garden, it is a witness to the noble cooperation between Spain and Egypt to preserve the heritage and history.

The Debod Temple was brought to Madrid in 1968, it was a gift from Egypt thanks to Spain’s help in saving the Abu Simbel temples. It was transported in 1329 boxes with 1724 pieces, the temple dating back to the 2nd century BC, and it was dedicated to the Egyptian God and Goddess Amun and Isis.

The Crystal Palace is one of the most beautiful places in Madrid City and one of the legendary palaces, it is located in the heart of Madrid’s Retiro Park and is distinguished by its unique architectural design.

Santiago Bernabeu Stadium is one of the famous stadiums in the world, it is a perfect place to visit for football lovers and the stadium hosted many important football games like the World Cup, the Champions League, and the European Nations Cup.

Santiago Bernabeu Stadium is located in the middle of Madrid, it is the home of the famous Real Madrid Team and it has a capacity of 80000 spectators. Don’t miss the chance when you reach there to visit the Championships and Titles Gallery in the museum, which shows you the most important achievements of Real Madrid throughout history.

Also, you can see the changing rooms, you can have a break at the café or restaurants there.

Puerta de Alcala is a beautiful monument that is located in Independence Square, one of the important squares in Madrid. It was called in the old days the Gate of Alcala because it was one of the five gates that lead to the city of Madrid.

Puerta de Alcala was opened in 1778 by the Italian engineer Francesco Sabatini, it is 30 meters high and the entrance gate is made of granite and the façade is decorated with sculptures and decorative reliefs.

Another famous square in the capital city, the largest in Madrid and Europe, was constructed in the 16th century by King Philip III and it was used for bullfights, ceremonial events like the announcement of a new king, and knightly tournaments.

The Mayor Square memorialized King Philip III by putting a huge statue of him in the middle of the square, while he was riding a horse. It is the perfect place for tourists to rest after a long day touring in Madrid, where you can watch the architecture of the Middle Ages and there are many shops, cafes, restaurants, and candy shops that are spread all over the square.

The museum was named after the famous Spanish painter Joaquin Sorolla, the museum contains more than 1200 paintings by him and also a collection of sculptures, ceramics, and a collection of photographs. You can also see the museum garden’s courtyard that is decorated with trees and with a gurgling fountain and Andalusian-style decorative tile work.

Reina Sofia Museum is a center for contemporary art, it was opened by Queen Sofia in 1986 and it was designed by the architect Antonio Fernández Alba. When you visit the museum you will see before you enter the three glass towers that include the elevators outside the building.

The museum contains more than 23000 artworks, which include many remarkable masterpieces like works by Joan Miró, Pablo Picasso, and Alexander Calder. There is also the garden inside the museum which contains many lovely sculptures.

Almudena Cathedral is one of the important attractions in Madrid, it was built in the 20th century by Pope John Paul II and it is located near the Royal Palace. The cathedral is featured by its beautiful design from inside and outside, its frescoes, statues, and its dome with a height of 70 meters.

When you are in the cathedral you can go to the dome and see a magnificent view of the city of Madrid and also inside there you can take a tour of the museum.

Retiro Park is one of the largest public parks in Madrid, it extends over an area of about 1400 km2 and it is located in the center of Madrid. The park is very popular among the locals there especially on vacations and public holidays. There are many activities that you can do inside Retiro Park like walking or renting a boat inside the huge artificial lake in the middle of the park.

It is a famous shopping street in Madrid, it is the street that never sleeps and it is located in the middle of the city and it is about 1.3 km long. When you walk in this street you will be admired by its beautiful buildings that date back to the beginning of the 20th century.

Gran Via connects the Callao Gate and Spain Square.
The street is full of many shops and malls that sell a lot of brands and also you will find the most luxurious world-famous restaurants and cafes.

Plaza de Cibeles is a fascinating square in Madrid, it is in a neoclassical style, and the most famous of these buildings are the Cibeles Palace, the Old Post Museum, and the Archaeological Museum.

In the middle of the square, you will find the Statue of Fuente de la Cibeles that was founded in the 17th century and it is a symbol of the city, and depicts the Roman gods, on a chariot pulled by lions and carved from marble. You will also find many shops, cafes, and restaurants located around the square.

Antalya: 14 Amazing Things to Do and See