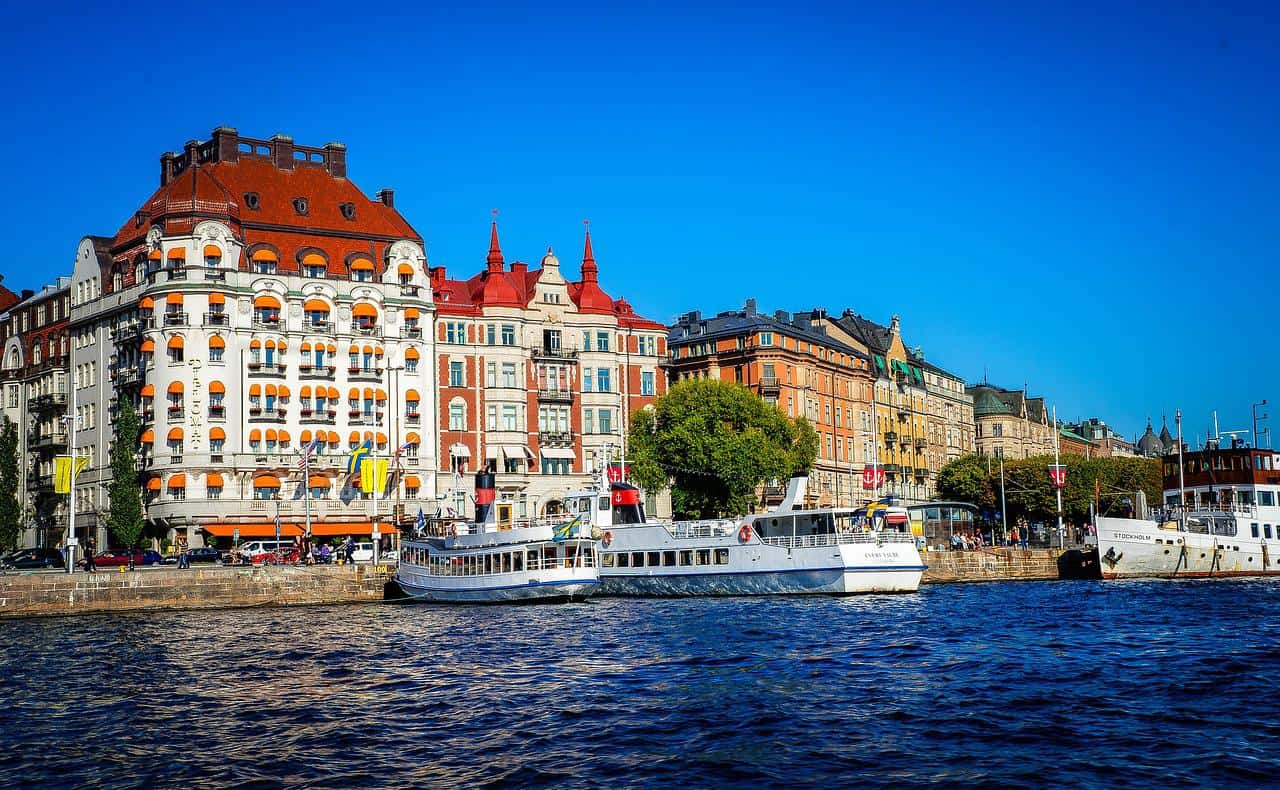 A European beauty, not like any other, Stockholm is the largest city in Scandinavia. Called by locals ‘beauty on water’, Stockholm is located on an archipelago of 14 islands which gives the city unmatched natural beauty, paired with the one-of-a-kind colorful buildings and cobblestone streets of Gamla Stan, and the incredible history and culture of the capital, you get one the world’s best and most beautiful destinations tourist destinations.

Because of how stunning Stockholm is, it could get a bit challenging to plan your trip there, especially if it’s the first visit. This is exactly where our Stockholm travel guide comes in handy.

When is the best time to go to Stockholm?

Since Stockholm tends to be more on the chilly side, the summer months, between May and September, are considered to be the city’s peak season since the days are longer, the weather is warmer, and the country’s biggest national festival, Midsummer, kicks off.

However, if you want to experience Stockholm with fewer crowds, try to go between September and early November, as the cozy Stockholm fall season begins, and the weather becomes more on the mild side making the streets of the Swedish capital perfect for outdoor activities like hiking and cycling.

Where to stay in Stockholm?

As a world-class destination, Stockholm is not short on impressive mind-blowingly luxurious housing and hotels. Here are some of the best Stockholm hotels:

Grand Hotel Stockholm oozes luxury with its exclusive restaurants, popular piano bar, and room styles that vary between royal Gustavian to contemporary chic. This waterfront hub also offers its guests a wonderful Nordic Spa, as well as a Fitness Club.

Located in the sunny neighborhood of Sodermalm, the Rival is a hip and luxurious boutique hotel that offers designer rooms, gathering spots for eating and drinking, and an impressive theater where some of the world’s finest talent have been showcased.

Combining historic significance with impeccable styles with rooms ranging in style from 19-century classical to contemporary sleek. Despite its central location, Berns Hotel offers special seclusion away from the busy city center. Aside from its hundreds of gorgeous rooms, Berns is also home to a buzzing nightclub as well as a stunning ballroom.

Dating back to the 17th century, this charming and cozy hotel offers mesmerizing views of the water in the Royal Haga Park. Aside from the incredible view and the awesome rooms, Stallmästaregården Hotel’s restaurant is the perfect place to go to enjoy authentic Swedish cuisine.

If you are looking for something more on the budget-friendly side, Castanea Hostel is one of the best affordable options that you may come across. Located in the middle of Old Town, it is a walking distance away from several shops, restaurants, cafes, pubs, galleries, as well as Stockholm’s public transportation system and some of the city’s best sights and attractions.

Where to eat in Stockholm?

Just like everything else in Stockholm, the dining scene is to-die-for. From 5-star restaurants serving gourmet cooked meals to vegan hubs using only organic and eco-friendly ingredients, the Swedish capital has it all. Here are some of the best restaurants in Stockholm:

Inspired in style by traditional stylish Parisian cafes, Riche cafe & restaurant has been serving Swedes gourmet delights for over a century with a seasonally changing menu ranging from classic French dishes to traditional Swedish meals.

Serving an exceptional combination of vegetarian dishes, salads, and hot meals with eco-friendly beers and soft drinks, Herman’s is quite the vegan heaven for Swedes and tourists alike, especially with the stunning garden view it offers diners.

Frequently named among the world’s best restaurants, Ekstedt offers you a complete experience, not just a meal. Serving a four- or six-course set menu built around reindeer and pike-perch, everything in Ekstedt’s menu is cooked in a wood-fired oven, over a fire pit, or smoked in a chimney, so it is safe to say that dining there will taste different than anything you have ever tasted.

If you happen to be in Stockholm between April and September, then make sure to pass by Hornstulls Marknad to experience the Swedish street food scene at its best. This street market opens every Saturday and Sunday from April to September and hosts a lot of food trucks serving all types of food, vegetarian and otherwise.

Located in Sodermalm, NYTORGET 6 is one of the most locally popular restaurants for its exquisite menu and authentic Swedish and Scandinavian cuisine. Make sure to pay it a visit if you want to experience the original taste of Sweden.

What to do in Stockholm?

As the largest Scandinavian city and the capital of one of the world’s most progressive countries and historically significant, Stockholm is rich in all aspects; culturally, historically, architecturally, and naturally. Here are -what we think- are the best attractions and things to do in Stockholm during your first visit:

Skansen is a hilltop open-air museum that houses traditional workshops such as the glassblowers’ hut and the rustic bakery, in addition to the museum’s Nordic zoo where bears, wolves, and moose are seen in their natural habitat and surroundings. Not an ordinary landmark, Skansen is often called ‘Sweden in miniature’ as it offers a fun and unique way to learn about the traditional ways of life throughout Swedish history.

The Stadshuset (City Hall) defines the city’s skyline with its blocky silhouette and waterside perch. However, it is not just the way it looks that makes it the one-of-a-kind landmark that it is, inside the building is just as impressive as its outside. From its famous Golden Hall to the beautiful frescos by Pins Eugen and the one and only Nobel Prize Banquet room, the Stadshuset is one of the most significant landmarks in Stockholm, if not all of Sweden.

The fully intact 17-century warship -the Vasa- which sank on its maiden voyage in 1628 is this museum’s most popular draw as it has been preserved beautifully over the centuries. The museum also gives you a closer look at life aboard and the lives of the victims who went down with the ship.

When it comes to entertainment, Stockholm always delivers, the city center amusement park, GRÖNA LUND is the place for you if you are looking to let loose or enjoy some serious adrenaline rush because it is filled with all sorts of rides, including some epic roller coasters. That’s not all, if you visit the GRÖNA LUND during the summer months, you might even catch a live music performance as several rock and pop concerts are held in the park on a regular basis during the summer.

Ever since it opened its doors in 2010, Fotografiska has become one of Stockholm’s most significant landmarks as well as one of the leading photography museums in the world. This magnificent building, which dates back to 1906, contains a massive collection of unique eclectic photography around every corner by both local and international photographers.

Whether you follow our guide or let the charm and magic of Stockholm carry you through, your time in this Scandinavian beauty is guaranteed to be no less than epic and unforgettable.

Your Guide to Exploring the Republic of Guatemala: 10 Riveting Things to Do and See in the Guatemalan Lands