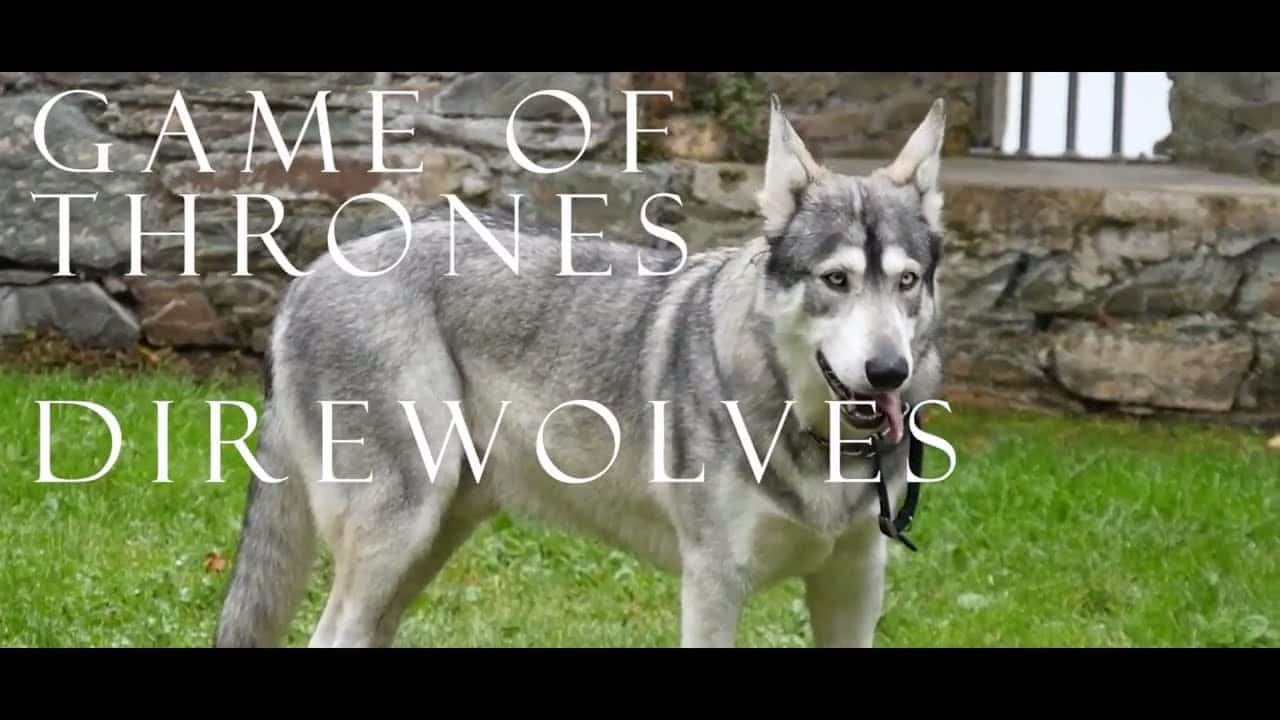 Who does not love Game of Thrones film series and its Dire wolves! While at the Winterfell Festival at Castle Ward in Northern Ireland, we came across the original or real Direwolves from the GOT TV show. Dire wolf means fearsome dog – and they look like it!

The type of breed for these Direwolves are considered very rare and they have also been considered the closest thing to wolves. They are an extinct species but were originally named back in 1858 when the first specimen was found. The Direwolves most likely evolved from the Armbruster Wolf in North America. Direwolves were considered to be very large and intelligent like the Gray Wolves which they are quite similar in size.

Of course, since Direwolves are extinct they didn’t actually use really once in the filming of Game of Thrones. These actually happen to be Northern Init dogs that are the closest thing (Lookswise) to the real-life Direwolves.  Northern Inuts dog bred played the puppies and young direwolves but where enhances with CGI as adult dogs to make them seem more realistic.

The Names of the Direwolves

Throughout the series of Game of Thrones, there are six direwolves in the show who belonged to the Stark children. The dogs playing the direwolves all have unique names which are Grey Wind, Lady, Nymeria, Summer and Shaggydog. Two of which are from Northern Ireland.

The two from Northern Ireland are Grey Wind and Summer. But their real-life names are Theo and Odin who are owned by William Mulhall from County Down. The dogs are insured for one million pounds and have become very famous all around the world since appearing on the show. Their parents were originally from England but these are the first of their type to be born in Northern Ireland.

They are even big on social media with their own twitter, facebook and Instagram accounts where they like to interact with fans. (Or should I say their owner does). When they aren’t filming Game of Thrones the dogs take part in events all around Europe.

Grey Wind appeared in three seasons – one, two, and three and unfortunately, he was killed at the Red Wedding (Spoiler Alert*)  Summer direwolf appeared in four different seasons: one, two, six, and seven and he was then killed in defence of Bran when wights and white walker attacked the cave of the Three-Eyed Raven. Hopefully, if you’re a Game of Thrones fan you’ll have already seen those episodes and we won’t have spoilt too much for you.

The only two direwolves still alive in the show are Ghost and Nymeria. Ghost was adopted by the character of Jon Snow played by Kit Harington. He’s are more unique that than the other as he was an Albino with red eyes. The second one Nymeria was adopted by the character Arya Stark played by Maise Williams. Nymeria leads the wold pack in the Riverland and is the first direwolf seen far south in many centuries.

Are you a Game of Thrones fan? Do you like the direwolves in the series? We would love to know!