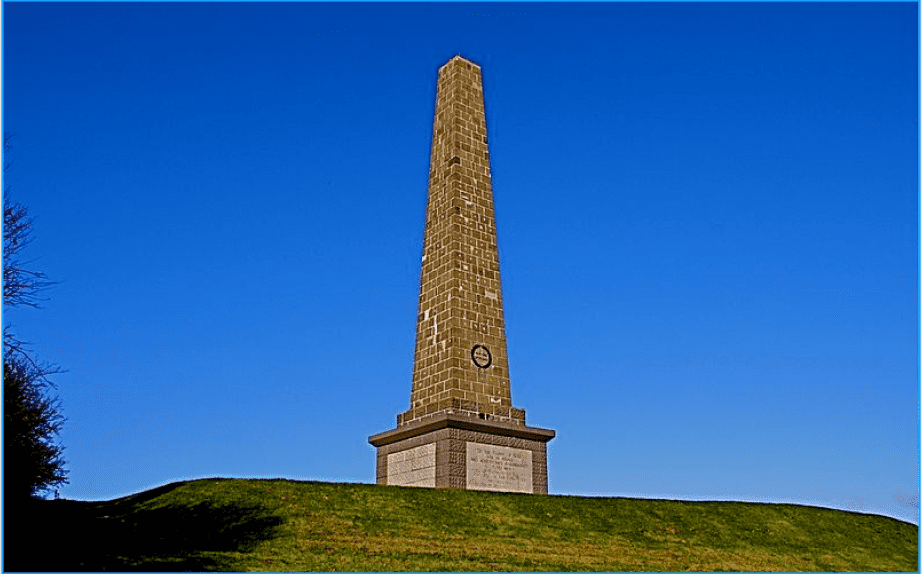 Located in County Antrim, Northern Ireland, the Knockagh Monument war memorial for those from County Antrim who died in the first and second world wars. It can be found at the top of Knockagh Hill, overlooking the village of Greenisland with a panoramic view of the city of Belfast. It is considered the largest war memorial in Northern Ireland; the site is 390 meters above sea level. The monument is a 34-metre high basalt obelisk and is a replica of the Wellington Monument in Phoenix Park, Dublin, although is exactly half of its height. The inscription on the monument reads “NOBLY YOU FOUGHT, YOUR KNIGHTLY VIRTUE PROVED YOUR MEMORY HALLOWED IN THE LAND YOU LOVED.” which is from the hymn “O Valiant Hearts” by John S. Arkwright.

How to get the Knockagh Monuments by Bus:

There are bus stations closest to Knockagh Monument in Carrickfergus, like Ballyaton Park, Mount Pleasant, Hampton Court, Railway Court and Glencree Park. Visitors can use any of these bus stations to get to the monument.

Hotels where you can stay near the Knockagh Monument:

There are a lot of hotels near the monument where you can stay in during your visit to the monument, let’s see some of these hotels:

It is located in Carrickfergus and features a 24-hour front desk. It is like an apartment with bedrooms, a living room and a kitchen with a dining area. It’s a 3 stars hotel and located within 3 miles of Knockagh Monument.

It’s one of the hotels near the Knockagh monument in Carrickfergus. It’s a 3-star hotel and although it’s not a big hotel containing only 68 rooms but visitors will feel comfortable in staying there.

It’s a 2.5-star hotel or apartment building and provides free self-parking and laundry facilities. The accommodation comes with free Wi-Fi and a kitchen.

The Village of Greenisland:

It is located in County Antrim, Northern Ireland and it is 7 miles northeast of Belfast. Greenisland is on the coast of Belfast Lough and is named after a tiny island to the west. It is the place where the Knockagh Monument is located.

The High Sheriff of County Antrim, Mr Henry Barton, managed to raise enough money to erect an obelisk in local basalt, and he raised 25,000£ in order to list the names of all those who hail from Co. Antrim who died in the Great War. On 7th of October 1922, the foundation stone was set, but financial difficulties delayed work on the monument. In September 1924, it was reported that work had been resumed. By the middle of the same year, about 2000 names had been collected. When the monument was eventually completed no tablets were fitted to it, to give an impression of the memorial’s huge size. After the deaths of Mr Henry Barton, Antrim Rural District Council was asked to adopt the monument and to complete it and it was finally completed in 1936.

After the end of the Second World War, the Knockagh Monument was dedicated to the soldiers who lost their lives in World War I and II. The monument was restored in 1985 and once again in 2006. It took three months to repair the monument with a total cost of £50,000 after all 10 local councils in County Antrim contributed £1,500.

In the year 2018, a huge fire took place near the Knockagh Monument; firefighters were battling in order to control the fire on the County Antrim hills. To control the fire that broke out, they had to call crews from other fire stations, but it was hard for the crew to access some of the affected areas. A spokeswoman said: “Firefighters from Carrickfergus Fire Station extinguished all accessible fire points and prevented the fire from spreading further. A small area of the fire remains inaccessible. Firefighters remain at the scene to monitor the situation. There is no risk to property or life.”

Places to Visit Near the Knockagh Monument:

Is located in the town of Carrickfergus in County Antrim, on the northern shore of Belfast Lough. The castle remains one of the best-preserved medieval structures in Northern Ireland and it notably played an important military role until 1928.

The museum is located in Cultra, Northern Ireland, about 11 kilometres east of the city of Belfast. It consists of two museums, the Folk Museum and the Transport Museum. The Folk Museum explains and shows the way of life and traditions of the people in Northern Ireland, past and present, while on the other side the Transport Museum explores and shows the technique of transport by land, sea and air, also past and present.

The castle is located in the Cave Hill area of north Belfast. Built in 1860, it is one of the city’s most famous landmarks. The Belfast Castle is 400 meters above sea level and from its location; visitors can see a beautiful view of the city of Belfast and Belfast Lough.

The zoo is located in Belfast, Northern Ireland and its one of the best attractions in the city with more than 300,000 visitors a year. It’s home to more than 1,200 animals and 140 species.

Titanic Belfast opened in 2012 as a commemorative monument to Belfast’s maritime heritage, built on the site of the former Harland & Wolff shipyard in the city’s Titanic Quarter where the RMS Titanic was also built, and it tells the stories of the Titanic, which hit an iceberg and sank during its maiden voyage in 1912.

All these places are located near the Knockagh Monument, where you can visit them on your day out and enjoy your time with family or friends.