The Surprising History of the Irish Flag 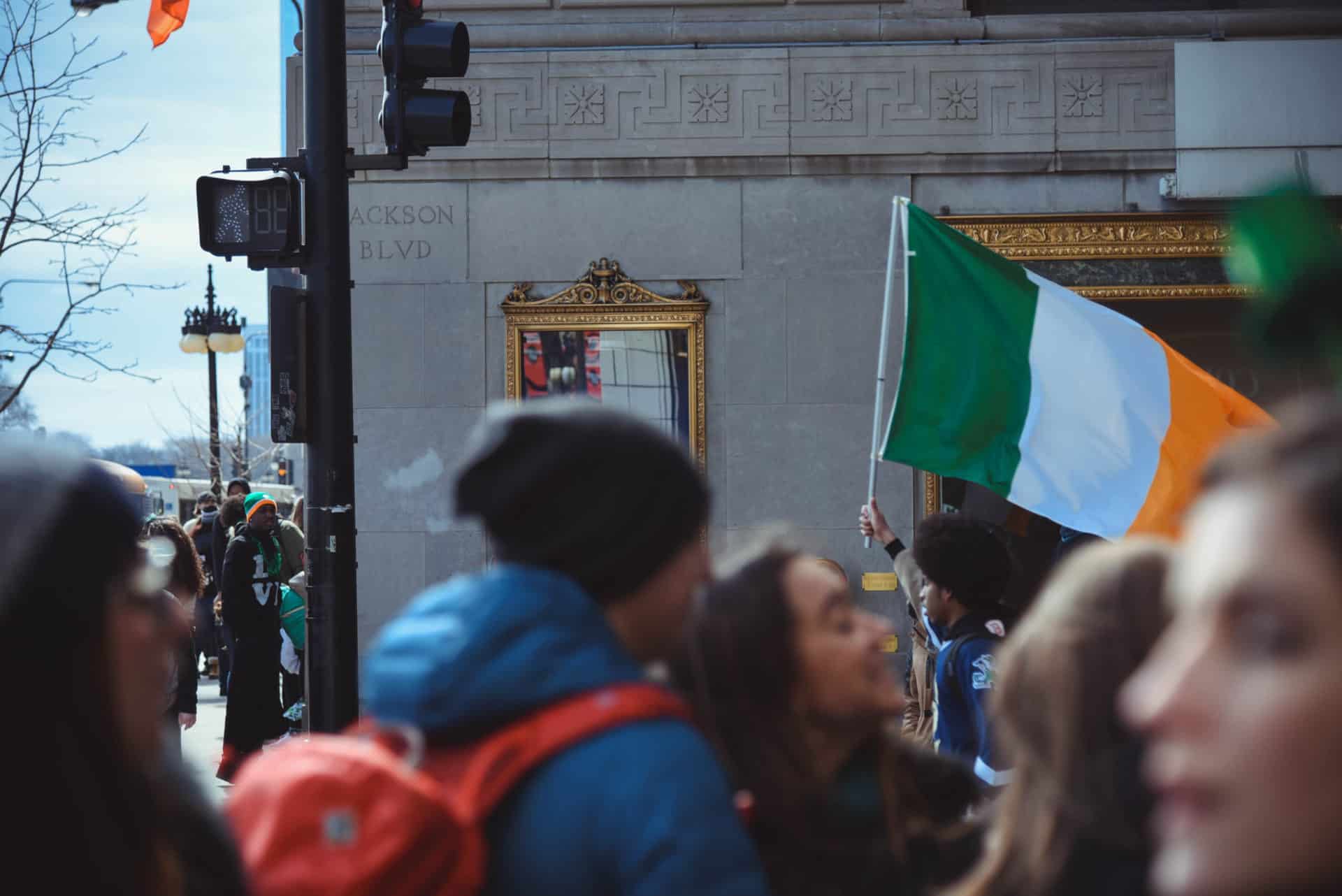 Flags have huge importance that helps us recognise different countries all around the world. Many of the world flags are filled with a fascinating history that helps give meaning to different places.

The Irish flag is one of the most recognized and spoken upon flags around the world. It is also famously referred to as the tricolour flag.  Here are some interesting facts to learn about this flag.

What does the Irish Flag Symbolise?

As it’s recognised by the whole world, the Irish flag is composed of three different colours. Apparently, those colours were not randomly chosen, but each colour bears an important significance to the country. It has also been one of the momentous symbols of Ireland. Those three famous colours include green, white, and orange, respectively.

The green part of the flag refers to the Roman Catholic community in Ireland. Some sources also claim it to be referring to the Irish folk in general. For many centuries, the Irish have been associating the green colour in their culture. Thus, it makes sense to use this colour, in particular, to refer to themselves.

On the other hand, the orange colour supposedly represents the supporters of William of Orange. They were a minority Protestants community in Ireland, yet they were among the momentous supporters of William. The latter had defeated King James II and the Irish Catholic army. This took place back in 1690 in the Battle of the Boyne. The reason people referred to William as such goes back to the Principality of Orange in the south of France. It was a stronghold for Protestants since the 16th century. Thus, the colour in the flag refers to the attempt at merging the Orange order with the Irish independence movement.

The white colour comes in the centre to signify the peacefulness between the two sides; Protestants and Irish Catholics.

The Symbolism of the Tricolour as a Whole

We have already broken down the elements that make the Irish flag up. However, the tricolour flag as a whole represents something very important. The intention of bringing those three colours together is a strong symbol of hope. This hope is towards the unions of people from different backgrounds and traditions within the borders of Ireland.

In other words, the flag sends a hypnotising message that Ireland is a land that embraces people from different origins.

Afterwards, the Constitution added an entitlement that whoever is born in Ireland becomes part of the independent Irish nation. This inclusion does not exclude anyone in terms of religion, political conviction, or even ethnic origin. Showcasing Ireland as a progressive and welcoming nation.

The First Time the Celtic Flag Flew in the Air

The new Irish flag was first officially used in 1848. To be more precise, Thomas Francis Meagher, a young Irish rebel, flew it on March 7 1948. That incident took place in Waterford City at the Wolfe Tone Confederate Club. For eight consecutive days, the Irish flag continued flying high in the air until the British took it down.

What Meagher did back then was regarded as bold and heroic to announce freedom and independence. Even in the US, people still remember him as a General in the Union Army and Governor of Montana. People do perceive him to have had an effective role in shaping Irish history immensely.

In fact, the motives behind Meagher’s actions were driven by the revolutions of 1848 that took place across Europe. He had other young Irelanders as mere supporters. They even travelled to France after overthrowing King Louise Phillipe I.

According to them, congratulating the rebels who did it, was a proper thing to do. There, Meagher, again, presented the tricoloured Irish flag that was made up of French silk.

Some parts of the world, sometimes, refer to the flag as the Celtic flag. In Irish, it is “’Bratach na hÉireann.” Long before the tricolour came into the world, there was another flag that signified Ireland.

It had a green background- Yes, green also- and a harp attached to a deity-like figure. The harp remains one of the prominent symbols of Ireland until this very day. That is because Ireland is the only country, that had a very special musical instrument associated with itself.

They found it very convenient to use that as the country’s national symbol. In fact, Owen Roe O’Neill was the Irish soldier who introduced the Irish flag back in 1642. He was also the leader of the O’Neill dynasty.

The Irish Flag Vs The Ivory Coast Flag

The globe is laden with several continents that embrace a wide array of countries. Some of them share some traits in terms of culture, traditions, and so forth. However, not all of them share the same flag, but with many of them, we can find some colours do overlap.

Not just colour, but also the design itself can be similar to a great extent. This is actually the case with the Irish flag; it looks a lot similar to that of the Ivory Coast. People have fallen into this trap for so many years because they are so identical, yet they carry different meanings.

Each of the flags represents something significant in its relevant country. Here is the surprise that some people barely realise; there’s one distinct difference between the two flags. They both have three vertical stripes of orange, white and green. However, the order of colours differs from one another.

The Irish flag starts with the green colour on the left side and then goes, white, and orange. On the other hand, the Ivory Coast flag looks like the Irish one flipped horizontally. So, it goes as follows, orange, white, and green. The consistency of the white colour in the middle may be the cause of the confusion. We have already learnt about the implications of each colour of the Irish flag. It’s time to learn about those of the Ivory Coast.

The Significance of the Tricoloured Flag of the Ivory Coast

It is widely known that the country is referred to as the Côte d’Ivoire- the French version of the name. No wonder the name is used in French, for the country used to be a French colony before becoming independent. They adopted the flag in December 1959, which marks two weeks before the official independence of the land.

On the other hand, the orange colour is a representation of the grasslands of the savanna. While the white colour signifies the rivers of the country. So, obviously, the Ivory Coast flag is a mere representation of the nature of the land. That is actually a huge difference since the Irish flag tricolour rather implies a political meaning.

Interesting Facts to Know About the Irish Flag

While its quite a fascinating flag that has inspired many figures all around the world, some facts remain mysterious. There are so many facts about the Celtic flag of Ireland that people have hardly ever heard of.  Let’s learn about them one by one.

It’s known worldwide that the green colour plays a vital role in the culture of Ireland. Little did we know, that in the colours palette, there is a green shade specified for Ireland. This colour is Pantone 347 and its the shade of green featured on the Irish flag.

So little flags use this colour all over the globe. Maybe that is why the world has associated it with Ireland. Or, maybe the Irish themselves adopted the colour as their own.

Women have always played vital roles in history and many have shaped the cultures and politics one way or another. We have already known the two rebellions that presented the new flag of Ireland to the Irish citizens.

But, we haven’t mentioned the three brilliant women behind the profound design. The eager Young Irelanders, Thomas Francis Meagher and William Smith O’Brien, travelled to France in 1848. The revolutions that took place in Berlin, Rome, and Paris inspired them immensely.

Thus, they arrived in France, where they met three local women who made up the new Irish flag. They were inspired by the tricolour of the French flag. So they made the Irish flag quite similar in design, but different in colour. They had weaved the Irish flag from French silk which the men presented to the Irish people when they got back home.

Maybe we have already mentioned this fact, but we haven’t mentioned that Meagher was originally born in Waterford. He was the leader of the Young Irelanders during the Rebellion of 1848. It was anticipated that he was the one to introduce the flag to the citizens.

But, choosing Waterford, in particular, remains mysterious. Yet, the fact that he came from this exact city added some sense to the whole story. The tricolour flag continued flying for a whole week before the British Troops brought it down.

Later, Meagher was accused of betrayal and the flag was not to fly again for the subsequent 68 years. However, Meagher at his trial, professed proudly that there would be a day when the flag reached the sky again. And, here we are, more than a century later, the Irish flag remains as prominent as ever.

Surprisingly, the flag was not official when the Irish citizens started using it back then. It only became official in 1937, yet it was used long before that. The Irish War of Independence raised the tricolour flag and it took place in 1919 until 1921. Moreover, the same goes with the Irish Free State who raised it in 1922. Starting from 1937, the Irish Constitution included this flag and deemed it official.