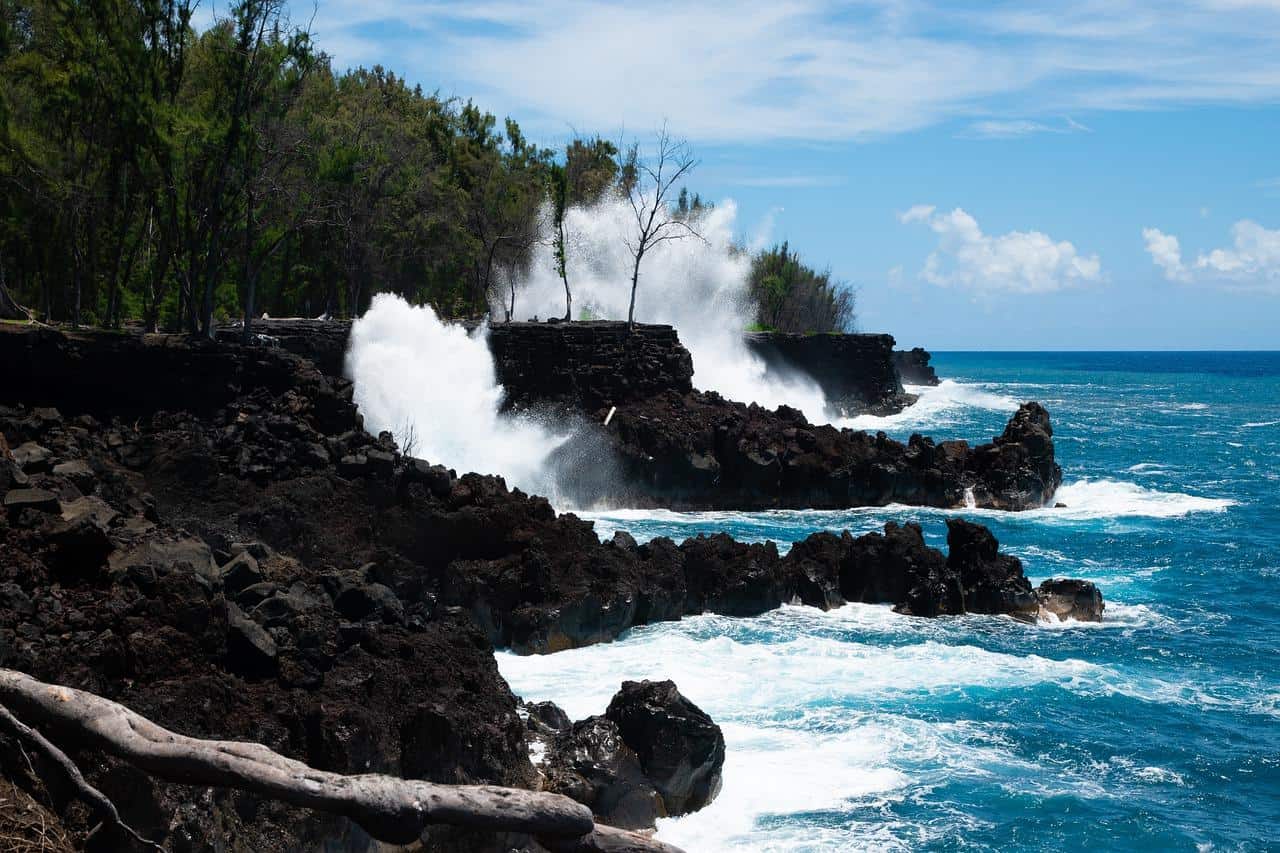 There is no need for citing reasons why Hawaii is an overall dream travel destination for almost anybody, regardless of the difference in interests. Hawaii is home to some of the best and most beautiful islands and destinations in the entire world, not just the United States of America. Among those gorgeous islands of Hawaii are Maui, Oahu, Kauai, and the subject of this article, the Big Island.

The iconic Big Island of Hawaii is one of the most geographically unique islands in Hawaii as well as all of the United States. Home to some of the most majestic natural attractions and phenomenons, Hawaii’s Big Island features black sand beaches, hardened lava deserts, snow-covered mountain peaks, and steamy and lush rainforests. However, the Big Island’s most popular attraction is its fire-spitting, active Kilauea volcano which has been causing an increase in the landmass of the island since the year 1983. Furthermore, the hiking trails and state parks on Hawaii’s Big Island offer some of the best sights in all of Hawaii

Granted, the Big Island is quite different from the rest of Hawaii as it does not send out the same honeymoon-perfect, romantic destination vibes. However, it does offer several opportunities to have the adventure of a lifetime while being surrounded by some of the most breathtaking sceneries in the universe. So if you have decided on the Big Island as the destination for your next trip, we guarantee you won’t regret it. To make sure you make the best out of your time there, here is a full guide containing everything you will need to know before you head to the Big Island, Hawaii.

When is the Best Time to Visit Hawaii – The Big Island

The temperatures in Hawaii’s Big Island remain fairly consistent throughout the year between the high 70s and low 80s. However, September, October, and November are considered to be the best months to visit the Big Island. During this time the room rates on the island take quite the dip compared to the peak season from December to March when room rates tend to skyrocket due to the ideal surfing conditions.

How to get around Hawaii – The Big Island

There are several ways to move around Hawaii’s Big Island, here is a rundown of the best ones:

Hawaii’s Big Island is quite large, and the best attraction sites are spread out along the several coasts of the island, a lot of which are not accessible by bus services. Therefore, the best way to get around it affordably and conveniently is by car.

You can easily pick up a rental car at the Kona International Airport (KOA) or the Hilo International Airport (ITO). Some hotels also offer car rental services. However, it is essential to note that some rental agencies will ask you to avoid some of the rough roads such as Saddle Road. If you would rather have a local do the driving so you can focus on the sightseeing, you can sign up for one of the many tourist tours available in the island.

Taxis, although comfortable, are not the most affordable way to move around the island, even by tourist standards as the meter starts at around $3. Taxis are also quite easy to get by, you can’t just flag one in the middle of the road. The best place to find them is around either airport; otherwise, you can ask your hotel to help you call for one. Uber service is also operational on the Big Island, however, still not as affordable as renting a car if you would like to navigate freely around the island.

Buses are the most affordable option to get around Hawaii’s Big Island as the bus rate starts at $2 (cash only) and kids ages 4 and younger ride for free. However, buses are only convenient in case you were not planning to venture off on your own too far from your hotel as the island’s bus system does not make regular stops at all the tourist attraction sites. The bus schedule is also not the most convenient, some routes are only services Monday through Friday.

Of course, this is not exactly a viable means of transportation, it is more of an adventure opportunity. Although it is quite a costly splurge, taking a helicopter ride over the island is a great way to see the magnificent sights of Hawaii’s Big Island, especially the rides over the island’s active volcanoes, and the valley tours through the Kohala or Hamakua coasts.

Where to stay in Hawaii – The Big Island

Some of the best resorts in Hawaii’s Big Island are Mauna Lani, Auberge Resorts Collection and Fairmont Orchid.

Among the highest-ranked family hotels in the Big Island, Hawaii, are Waikoloa Beach Mariott Resort & Spa and Hilton Waikoloa Village.

Among the hotels with the best spa treatments on Hawaii’s Big Island are Fairmont Orchid and Mauna Kea Beach Hotel, Autograph Collection.

Ranking among the best hotels for golf in Hawaii – the Big Island are Hilton Waikoloa Village and Mauna Kea Beach Hotel, Autograph Collection.

Other high-ranking hotels on the Big Island:

Best places to eat in Hawaii – the Big Island

As a hot tourist spot, Hawaii’s Big Island features a variety of restaurants, eateries, cafes, and breakfast joints that offer visitors an inclusive cuisine that caters to the different tastes and appetites of the island’s visitors.

On the island, specifically in the hotel areas, you will find several Hawaiian fusion restaurants serving plates like shredded pork, poi (a Hawaiian Dessert dish), and several other regional dishes. Another staple served in restaurants all around the island is, of course, fresh seafood. Some of the best eateries on the Big Island are located on the Kohala coast, near Kona. However, the prices around this area are not exactly budget-friendly. Some of the highest-ranking restaurants in this area are the ULU Ocean Grill at the Four Seasons Resorts Hualalai which is highly praised for its unique menu and spectacular ocean views. For more affordable prices in Kona, you can dine at 808 Grindz Cafe.

Prices are generally reasonable at most Hilo eateries such as Hilo Bay Cafe which is especially popular for its sushi. Some of the best local favourites such as Paul’s Place and Pineapples are also considered to be more on the budget-friendly side.

Here is a list of the best restaurants to try while on Hawaii’s Big Island:

Hawaii’s Big Island is a lot of things, boring, is most definitely not one of them. During your visit to the Big Island, you will be overwhelmed with the wide range of sights, attractions to visit, and activities to enjoy. From the active lava-spewing volcanoes in Hawai’i Volcanoes National Park to the stunningly beautiful Waipio Valley, the Big Island features some of the most unique and jaw-droppingly beautiful natural attractions. In addition to the gorgeous natural wonders, popular beaches, and magnificent hiking trails, the Big Island offers some awesome shopping opportunities for those looking to obtain some authentic Hawaiian souvenirs before returning home, the most popular shopping hub on the island is Hilo Farmers Market which offers an impressive collection of Hawaiian treats and crafts.

Here is a list of the best places to visit and things to do on Hawaii’s Big Island:

Hawai’i Volcanoes National Park of the Big Island contains two active volcanoes among which is the iconic Kilauea volcano which is the main attraction of this national park. Kilauea is a 4,000-foot-tall volcanic mountain that has been actively spitting and spewing lava since January 3rd, 1983. In May 2018, Kilauea erupted destroying entire communities around it which resulted in mandatory evacuations and the closing of the Hawai’i Volcanoes National Park for four months till it reopened back in mid-September 2018. Even though the eruptions and volcanic activity of Kilauea have stopped since the last eruption in 2018, it is still at the top of America’s list of volcanoes to monitor.

Ranking fairly high among the most picturesque white sand beaches on the Big Island of Hawaii is the stunning Kaunaoa Beach. Located on the central Kohala coast, the eggshell-coloured sand beach of Kaunaoa has more to offer than a picture-perfect background for some holiday shots. Snorkelling is among the most popular activities at Kaunaoa beach, especially at both ends where you can witness the best underwater wonders. You can also go for a volleyball game on the beach or even try bodyboarding.

Akaka Falls State Park guarantees its visitors a close-up view of two consecutive and almost equally stunning waterfalls – the gushing Kahuna Falls and the iconic free-falling Akaka Falls after which the state park was named.

To be able to enjoy the spectacular views only available in Akaka Falls State Park to the max, visitors have to invest their time and effort into hiking a short, paved loop trail through the park. It is said that this trail is flat and quite easy enough for just about anyone to hike, even young kids. It is also quite short that most people make the loop through the park in about 20 to 30 minutes.

Another great perk about Akaka Falls State Park is its convenience and affordability. Thanks to the fact that it is open daily, you can fit it anywhere on your itinerary. It also only costs $1 per pedestrian and $5 per car so it will not be causing any damaging dents into your holiday budget. Considering the views waiting for you inside, and how affordable and easy it is to get there, there is almost no reason good enough to skip visiting Akaka Falls State Park during your time on Hawaii’s Big Island.

Translated as “curved water”, Waipio Valley is named after the Waipio River which runs through it. The Waipio Valley is one mile wide, over 5 miles deep, and enveloped by lush cliffs that rise as high as 2000 feet. It features several black beaches that are simply hauntingly beautiful, however, the water at said beaches is too murky to be considered suitable swimming water.

Whether your goal is to find a spot perfect for snorkelling and discovering the wonders that lay underwater or find out interesting historical facts about the destinations of your vacations, this bay will serve both purposes. This remote bay on Hawaii’s west coast offers its visitors the chance to swim among a wide collection of sea turtles, tropical fish, and Hawaiian Spinner dolphins which are quite visible below the calm, shallow water’s surface.

That’s not all, Kealakekua Bay holds quite the historical significance. Back in January 1779, navigator Captain James Cook spotted the bay and stayed there as a guest for several weeks till tensions arose between him and the locals leading to him being killed on the same shore. This major historical event was monumented by the iconic large white Captain Cook Monument which sits across the bay. You can also learn more about the history of the bay through the history lessons presented by the stat park which enlights visitors about the historical importance of the Kealakekua Bay.

The range of the beauty of Hawaii’s Big Island is almost too wide to cover. However, whether you decide to follow our itinerary or go as the wind takes you, one thing for sure is that you will absolutely have the time of your life in the Hawaiian gem that is the Big Island.