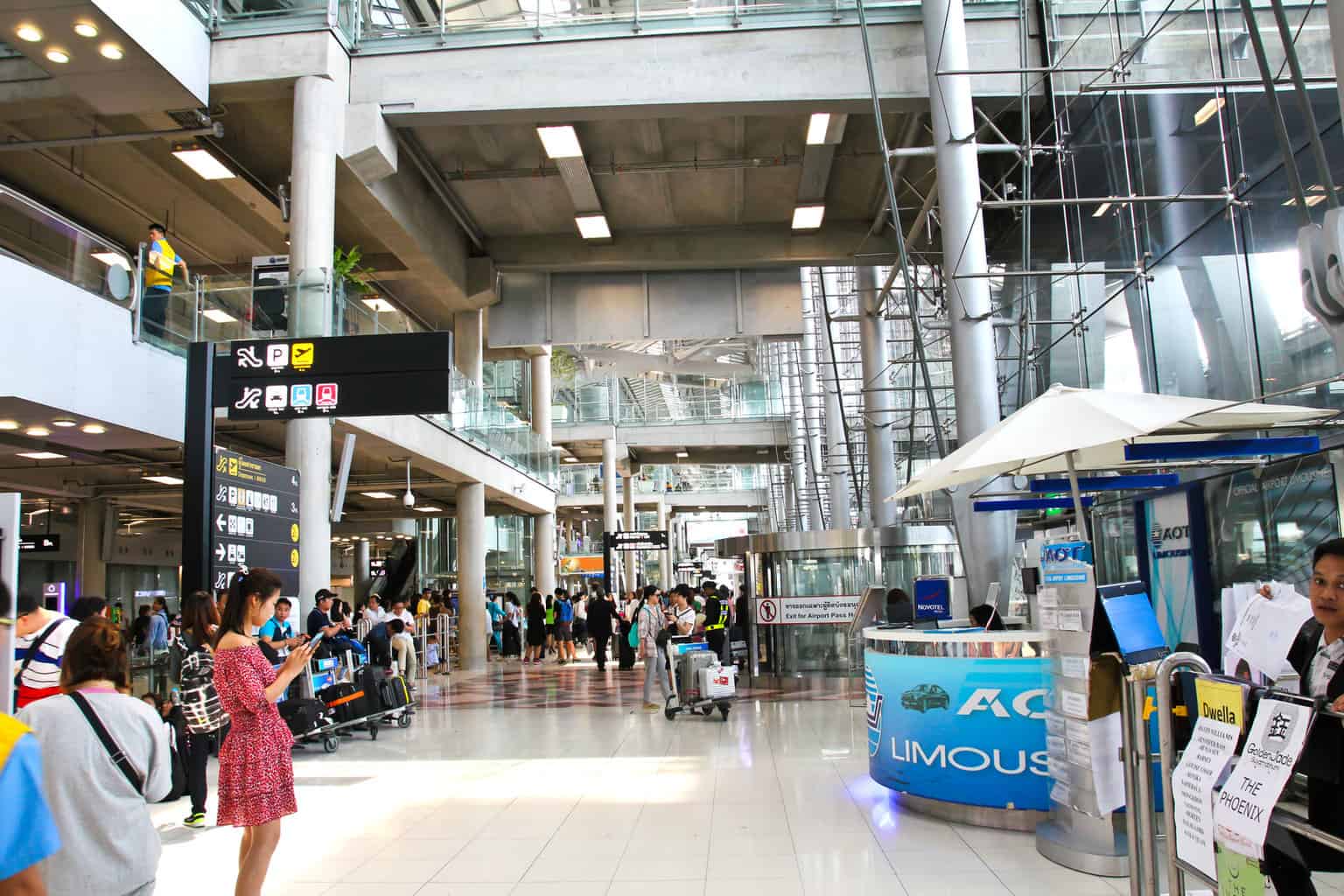 The country’s official name is the Kingdom of Thailand. The capital city of Thailand is Bangkok which means the city of angels. Thailand lies in the centre of Southeast Asia.

Thailand has a population of 64.1 million, and it is a multi-ethnic nation. The official language is Thai, with various dialects. Malay and Chinese are among the other languages spoken in Thailand.

Thailand features mountains, a long shoreline along the Gulf of Thailand, plains, hills and the Andaman Sea. It also has various accommodations and top-rated hotels and restaurants.

Thailand has many airports across the country. The Thailand airports serve both domestic and international travel. They are well connected, making commuting easy for its travellers. Let’s check the following list of the best Thailand airports.

Suvarnabhumi is the most important international airport in Thailand, Bangkok. Also, it is the busiest airport in the country. The name of the airport is derived from H.M. King Bhumibol Adulyadej. It translates to the ‘Golden Land’, the ancient name of the Thailand-Cambodia-Laos-Burma region.

Suvarnabhumi is one of the two Thailand international airports serving Bangkok. The Thailand airport lies 30 kilometre east of Bangkok and works all 24 hours.

Suvarnabhumi features two parallel runways and taxiways, making arrival and departure leisurely. The airport also contains a business class luxury lounge by Oman Air for the ease of its travellers.

Novotel Suvarnabhumi, a 600-room hotel, is just ahead of the passenger terminal building, which makes it pretty appropriate for travellers. It is the ideal airport to fly to Thailand.

Don Mueang International Airport is among Asia‘s oldest airports and has been functioning since 1924. It stopped working when Suvarnabhumi started operating, but colossal traffic resulted in its reopening in 2007.

Now it is the centre of regional and domestic travel. It lies in Bangkok’s northern suburbs, providing affordable flights to destinations inside the country.

Don Mueang International Airport has a few food and coffee bars. There is Amari Don Muang Airport Bangkok Hotel in case of a stopover, and you want to rest. The airport also features VIP lounges, currency exchange facilities and souvenir shops.

Phuket International Airport is Thailand’s second most occupied airport because many travellers choose the lovely Phuket beaches for their vacations.

It is also easy to move from the airport since there are many services, including airport buses, public taxis, and limousines. Phuket International Airport is unique due to its elegant design.

Samui Airport is one of the most exquisite international airports in the world. The airport leaves an everlasting impression on its travellers with elegant wooden interiors.

Taxis are affordable here, and you can hire one to get to your stay conveniently. You can also use ferries or other sea connections easily. Direct flights to Singapore, Kuala Lumpur, Phuket, and Bangkok are also direct flights.

You can also experience a typical Thai massage at the airport, which also features some of the most special holiday-items stores. The airport welcomes its travellers with total friendliness and hospitality.

Samui Airport also offers complimentary snacks, drinks and WiFi at departure. Samui Airport is at the top of Thailand’s airports because of its unique design.

Near Hat Yai lies the main southern hub airport of Thailand. It is easy to move from the airport as public buses operate. There is also a taxi facility, and the station is outside the Arrivals hall.

The airport has money exchange facilities and ATMs to help travellers better. For food and drinks, you can find some restaurants, and you can also find Dunkin’ Donuts.

The airport also features souvenir shops and two duty-free stores at the Arrivals and Departures halls. Other amenities are inside the terminal, including the Muslim and Buddhist prayer rooms.

Hat Yai International Airport also offers a VIP room, medical facilities, a spa, and a Thai Royal Orchid Business Lounge. This airport is at the top of the list due to its easy arrival and departure process.

The Chiang Rai Airport lies at a distance of 10 kilometres from the city centre in northern Thailand. Local Thai buses run to and from for an easy move from the airport.

You can also hire taxis outside exit gate 3 or take a tuk-tuk, the local ride in Thailand, outside the airport. The airport has two money exchange facilities and a couple of ATMs.

The airport has a couple of food joints, including a bakery and ice cream shop for sweet lovers. It also has a bookshop for those who want to keep a book handy while travelling.

The airport also features a meditation, spa, and prayer room. Among all the airports in Thailand, The Chiang Rai Airport is a unique one due to its design.

The U-Tapao International Airport lies midway between Pattaya and Rayong. It is also famous as Pattaya Airport. Besides commercial flights, the airport is a Royal Thai Navy Air Station.

The main cities that the airport serves are Phuket, Koh Samui, Macau, Nanchang, and Kuala Lumpur in Malaysia. It also serves Chiang Mai, Hat Yai, and Udon Thani in Thailand, Shanghai, and Nanning in China and Singapore.

There is only one terminal working for both domestic and international flights. It is easy to reach Pattaya and other bordering cities as you can find convenient taxi and bus services.

The U-Tapao International Airport also holds a souvenir store, an internet cafe, postal services, a coffee shop, and a restaurant. It is one of the best airports in Thailand.

The Krabi International Airport lies about 15 kilometres from the city centre. It runs flights daily from Bangkok and Kuala Lumpur. It also runs flights from Darwin and Singapore. The airport features shared minivan transfers, private taxis, and car rentals.

The airport includes two different terminal buildings for domestic and international travel. It has a few ATMs, along with a currency exchange facility. You can find several eating spots, including Subway and a coffee shop. The airport also features a small souvenir shop.

Chiang Mai airport is a famous and busy airport containing two connecting terminals for domestic and international flights. The transfer is easy due to taxis and hotel transfers.

The airport has sections of currency exchange and stores without taxes for shopping. As well you can buy local handicrafts from some stores at the airport. Thai Airways operate a restaurant on the second floor.

In addition, there are a couple of food outlets, such as a pizza stand and coffee places. The airport also has a lounge for the peace of its travellers.

Besides the commercial base, it also operates for the military and is a functional RTAF base. The transfer is leisurely with private taxis and shared minivans.

Khao Sok National Park is included one of the most famous attractions and natural sites to visit in Thailand. It lies on the mainland in southern Thailand. It was a massive rainforest that turned into a national park in 1980.

The national park is relatively large and is home to a wide selection of wildlife, including bears, elephants, porcupines, hornbills, and many more.

Besides being one of the most ancient rainforests in the world and home to some of the world’s most giant mammals, Khao Sok is most famous for its distinctive flowers, such as the Bua Phut.

The national park is very well preserved. Hiking is one of the most favourite activities here, although the park features two maintained trails.

There are floating cottages on Cheow Lan Lake, which are extremely popular. You can also visit the million-year-old limestone caves, which are one of the attractions.

Thailand is famous for its stunning tropical paradise touch. Although there are a million sites like that in the country, few are as lively, fascinating, and chilly as Koh Lipe.

Koh Lipe is Thailand’s southernmost island and is less populated, contrary to many of its counterparts.

In contrast to many other islands in Thailand, Koh Lipe is underdeveloped, still one of the best attractions. You can enjoy the lovely white sand beaches in the country, and pristine nature, which make it one of the most remarkable spots to visit in Thailand.

Pai is unique and features a chilled vibe. So, you can pick a trip to find the ideal things to do in Pai. It is one of the best attractions.

Pai is an enchanting little town close to Chiang Mai, the second largest city in Thailand. Pai has many overwhelming activities to explore.

The whole atmosphere of Pai is very peaceful and cosy. It is considered a free spirit village in the middle of Thailand, where hikers and travellers go to relax.

Some of the favoured activities to do in Pai are checking out Pembok Waterfall and the canyon. You can also drive around with a scooter among beautiful nature while surrounded by some of the most friendly residents.

Thailand has a rich history and stories about old kingdoms. Ayutthaya is the ancient capital city of one of those prosperous kingdoms and one of the best attractions. This kingdom was called Siam. Ayutthaya was robbed after a contest with Burmese forces.

The old city of Ayutthaya used to be one of the most important trading centres. Also, it used to be a centre for culture, arts, and religion, which is what most of the remnants reflect.

The city also features old temples, whose forms shape the sunset skies, and huge stupas that arouse a lost feeling of majesty.

The Historical Park of Ayutthaya is among the most remarkable spots to visit in Thailand as it looks and feels downright magical.

Chiang Mai is a cultural city featuring much rest and leisure and one of the best attractions. It contains hundreds of temples, distinctive streets, and stores that make Chiang Mai one of the ideal places to visit in Thailand.

Chiang Mai features a great variety of outdoor activities due to the surrounding pristine nature. You will barely have enough time to try outdoor adventures.

It is a top-rated hotel located in Bang Rak Subdistrict, Bangkok. The hotel offers modern rooms to meet the modern lifestyles of today. It is convenient for leisure or business.

It is surrounded by modern shopping malls, restaurants, nightlife pubs, office buildings, and more. The BTS Sala Daeng Station and MRT Silom Station are close to the hotel.

All guests can enjoy free high-speed internet, breakfast, and paid public parking. Airport transportation is also available, along with other amenities.

It is a top-rated hotel in Khwaeng Klongtoey Nua, Khet Wattana, Bangkok. It is a modern and stylish hotel. It has 338 luxury rooms and suites.

The hotel also features various outstanding dining restaurants, including the Amristr and Rand Mahal Restaurant. Guests can enjoy the landscape from the rooftop bar. All guests can also access free high-speed internet and free parking.

The Okura Prestige Bangkok is a top-rated hotel in Park Ventures Ecoplex, Pathumwan, Bangkok. It is a luxury and charming hotel with 240 rooms and suites. Also, guests can directly access the city’s BTS SkyTrain network at Phloen Chit station.

The hotel is surrounded by main shopping malls, commercial districts and embassies. Also, guests can enjoy impressive views through the panoramic windows of the rooms. Rooms are equipped with the latest technological developments to better suits business and leisure travellers.

Thailand lies in the centre of Southeast Asia. It has many domestic and international airports to serve travellers. Thailand features various attractions worth visiting and different accommodations to relax on a comfortable bed at night.

The Interesting History of Galway throughout the centuries

100 Impressive Things to do in Sicily, The Loveliest Region of Italy