The Magnificent Temple of Olympian Zeus in Athens 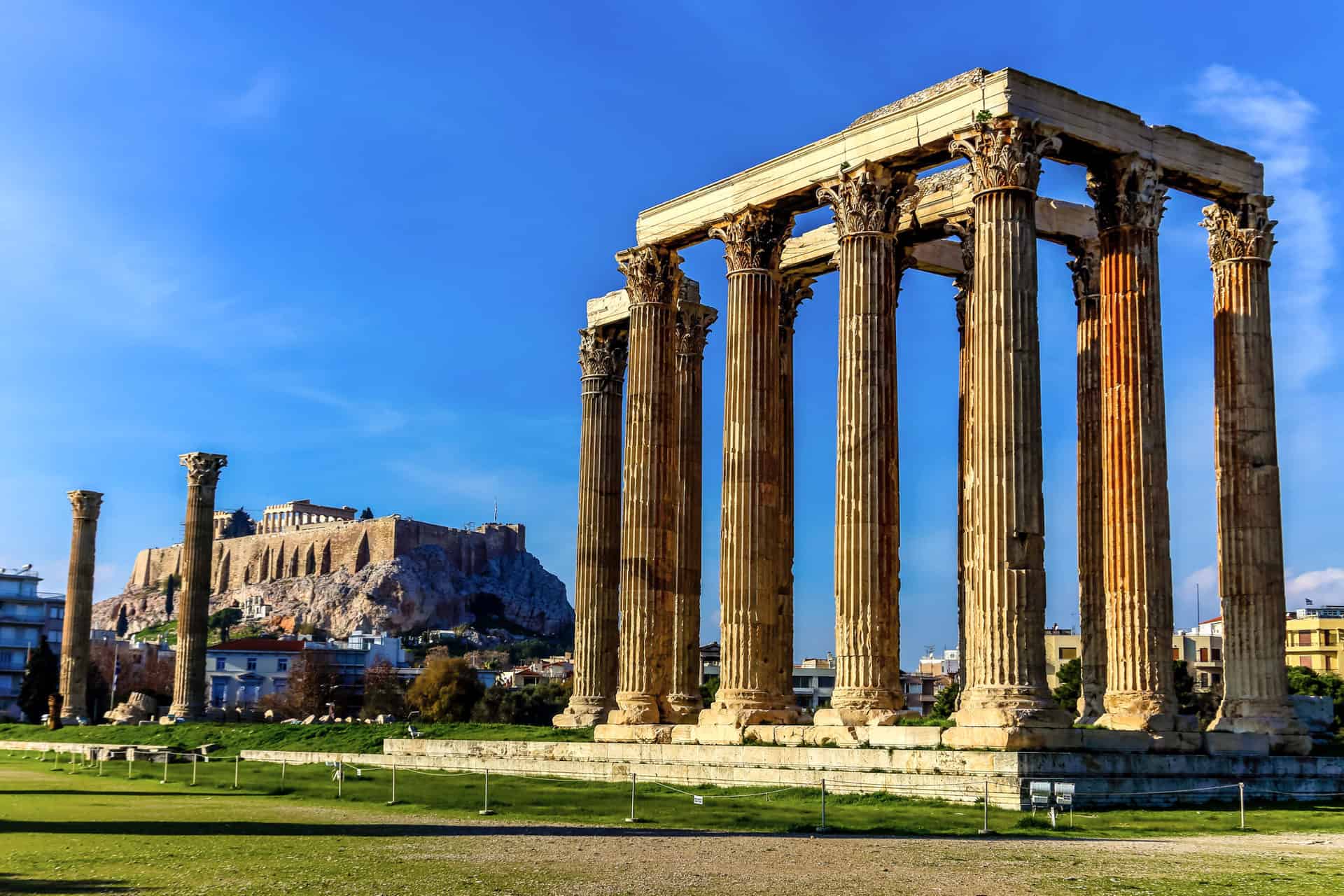 One of the most influential cultures around the world is the Ancient Greek culture. Visiting Greece will not only take you back on a tour through ancient history, but also through human ideology. The Greeks being one of the most ancient civilizations have influenced the human kind ideology in various fields. Their culture has many pillars, one of which is the famous Greek mythology. The stories of their Gods were considered their Bible.

Below we will unravel the influence of Zeus, God of the Gods. The stories revolving around him have influenced and shaped the Greek man’s way of life, and they have continued to influence our modern-day art and literature. In addition, many travelers can get in touch with the ancient ruins dedicated to him in different parts of the world.

Zeus in Greek mythology is the father of all Gods. He is the God of the sky, the controller, the protector and the punisher. He was praised in every story in the Iliad and the Odyssey by Homer. Likewise, he was also praised in the human world by humans on different occasions.

His story begins with the marriage Uranus (Heaven) and Gaea (Earth), who gave birth to Zeus’ father Cronus and his mother Rhea. Cronus was warned by his parents that one of his sons will rise against him. Therefore, he swallowed all of his children except for Zeus whom Rhea hid. When Zeus grew up he dethroned his father and saved his siblings. He as a result become the father of the Gods and settled his divine kingdom on Mount Olympus.

To give life to Gaea, Zeus ordered one of his sons, Prometheus, to create man. Prometheus created man in the form of the Gods and gave him the gift of fire. Feeling deceived by his son, Zeus punished Prometheus and created Pandora, who is the first beautiful woman on earth. Pandora was given a box which she was ordered to never open. However, her curiosity overcame her, and she opened the box, unleashing all the horrors to humankind but also giving freedom to hope which was at the bottom of the box.

Moving from the world of the Gods to humankind world, Athens was one of the most important ancient Greek Poleis. It was a hub of art, learning, and philosophy. Athens was the birthplace of many ancient influential philosophers, politicians, and artists like Plato, Aristotle, Socrates, Sophocles, and many others. Therefore, it is considered a cradle of western civilization and the place where the notion of democracy and its practice was originally born.

The Temple of Zeus is located near the center of the city, about a quarter of a mile to the southeast of the Acropolis, and south of Syntagma Square and the Parliament Building. Keep in mind that until 2 AD it was the largest temple in Greece, bigger than the Parthenon, as it consisted of 104 pillars.

The columns are decorated by Corinthian capitals carved from two massive blocks of marble. There are also gigantic chryselephantine (gold and ivory) statues of Zeus and Hadrian. Thus, Hardian was given equal status to the great Greek God. Today only 15 columns stand as the temple suffered different phases of destruction. The temple was built throughout different periods in history beginning 174 BCE and completed by Roman emperor Hadrian in 131 CE.

Temple o Zeus today is considered one of the open museum destinations around the world. You can reach the temple in Athens by riding the Metro,  Akropolis, line 2. Price of the entrance is €12 (US$ 13.60) for adults and €6 (US$ 6.80) for Students. And do not forget to stop by the Museum of Greek Folk Art, the  Acropolis Museum Theatre of Dionysus, and Anafiotika which are all less than 500 m away from the temple.

Where to stay in Athens?

There are many hotels and resorts in Athens with different price ranges. To name some:

It is a hotel with an excellent location in the heart of Athens. Visitors praise the hotel’s service and rooms view and designs. The price for a double room range from USD 210 to 180.

These Studio apartments will be a great choice for your stay on a budget, especially for families. It is not located far from the temple of Zeus, only an eight-minute walk. Prices per night range from USD 35 to USD 50.

How to get around in Athens?

Athens has an exceptional public transportation network that covers all the city. The fastest way to get around is by using the Metro. It runs daily from 5 am to midnight. Another option is the buses and trolleybuses, but you have to check the timetable of your route. Finally, the tram network connects central Athens with coastal suburbs.

Athens’ transportation tickets are affordable and available in all Athens Metro and tram stations. You can use one ticket for different means of transportations for 90 minutes, or you can buy a day’s pass which will be slightly higher in price but you can use it all day for 24 hours.

If you are not looking to spend your summer vacation in Greece, then the best time to visit Athens is between March and May and from September to November. During these months, the weather is agreeable, and the sun is shining. Also, you will get away from the hustle and bustle of the crowds in summer.

Depiction of Zeus and the Temple in Works of Art Today

Being a culture based on stories of the Gods, the influence of Greek mythology on modern art and literature still increases to date. Zeus as the all mighty God of the Greeks was depicted in many movies. One of the best representations is in the movie Clash of the Titans.

In Clash of the Titans, Zeus is presented as the creator of humans, whom he uses their prayers to fuel his power and immortality. The humans rise against the Gods, refusing to submit to their powers. Viewing this as an insult and ingratitude, Zeus agreed to his brother Hades’ plan to punish them by releasing the Kraken, which is an undefeatable beast of the Underworld. Amid all this turmoil appears Zeus’ son, a Demigod, Perseus who defeats the Kraken and saves humankind from destruction.

The temple of Zeus appears in the movie as a symbol of the sanctuary. It is where they run to in order to fight the underworld creatures. They actually win with the help of the Genies. The scene included the destruction of some of the temple’s columns, which is a mimic of historical reality where the temple was actually destructed amid war chaos.

Zeus is depicted in the movie through different lights. He is both the punisher and the protector, and the father and the divine ruler. All these aspects were extensively present in Greek mythology. Therefore, this movie provides an excellent representation of Zeus.

After all has been said! Get your popcorn ready to watch this captivating movie on Netflix during your next movie night. And do not forget to check Connolly Cove’s suggestions on the best places to visit in Athens when you plan your next trip.

6 Best Things To Do In Nantes: Western France's Crown Jewel!

Top 7 Things to do in Pleven, Bulgaria