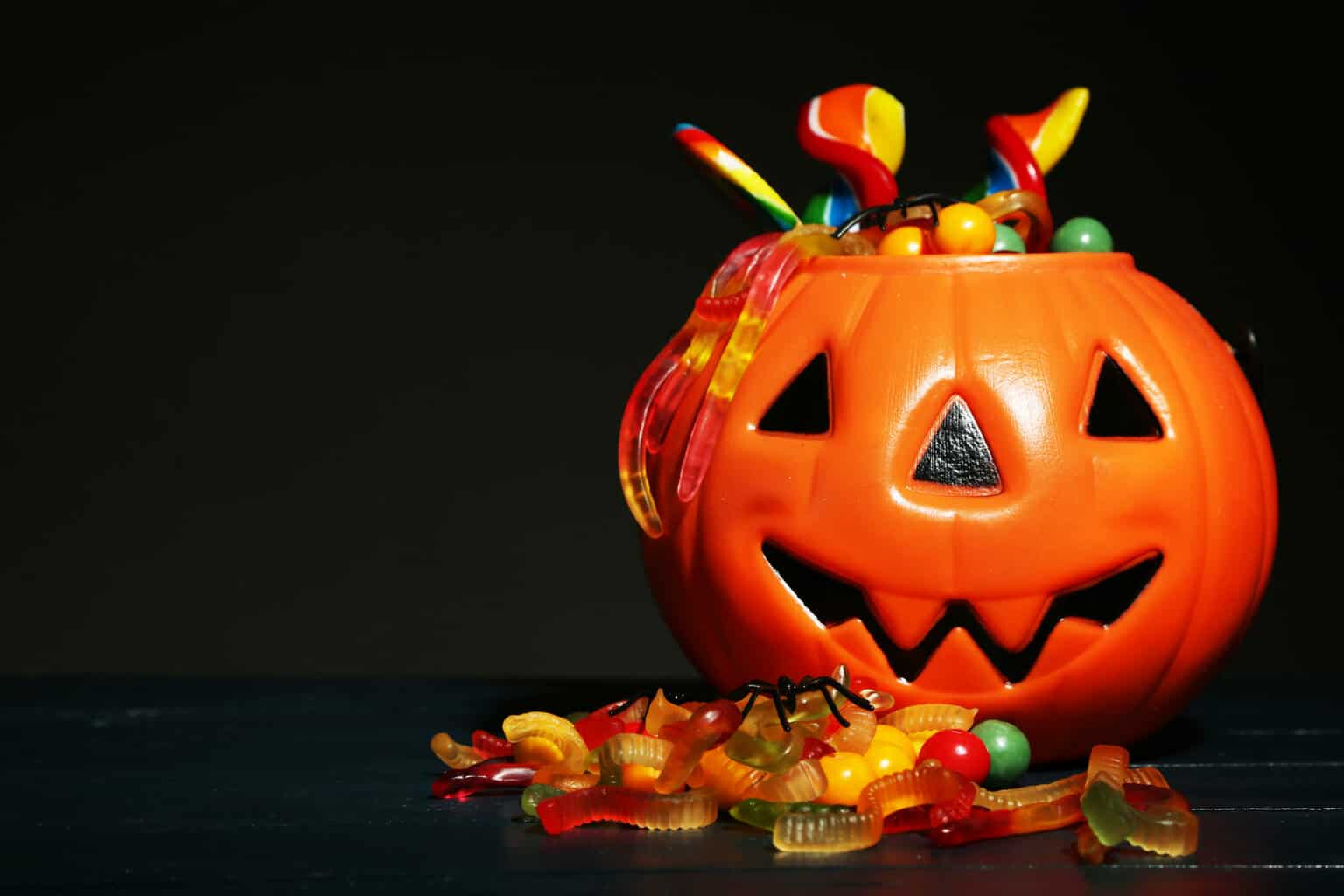 Halloween is a holiday synonymous with sweets and candy, especially free sweets and candy given to you by your neighbors to prevent you from pranking them. Where did this tradition start and where’s the best sweet shops in Belfast for Halloween treats? Read on to find out where early trick or treat traditions came from and where you can continue them!

Want to learn more about Halloween traditions? Check out our article on Samhain, the original Halloween festival.

Why do we have sweets at Halloween?

The earliest form of giving treats out at Halloween comes from the tradition of ‘Souling’, to understand this tradition it is important to know how prayers were used in medieval Britain. Christians at the time believed that after death you would go to purgatory to pay for your sins before being allowed to go to heaven, a terrible place one wanted to get through as quickly as possible. It was believed that you could get out of purgatory and into heaven quicker if someone prayed for your soul.

You could also get out of purgatory quicker by paying for or facilitating masses through donating money or property in your will. A mass that was paid for in a will or by a rich person via donation was called a chantry. Those rich enough would even have chapels built specifically for chantries and we can see these chapels around in churches today even as the tradition is no longer practiced. This belief went right to the top of society and Henry the fifth, King of England, asked for 10,000 masses to be celebrated in the month following his death. Whether this happened or not is debatable.

So, what is souling?

Souling was a tradition in which poor people would go door to door asking for money or food in return for praying for the souls of loved ones who were in purgatory. They would often be given baked goods such as soul cakes or even ale. This tradition was later taken up by children who would also be given cakes and ale. This is the earliest form of ‘trick or treat’ associated with Halloween, or ‘All Souls Day’.

How did this change in modern Halloween traditions?

Much, much, later (in the 20th century) as Halloween became a more secular tradition and a time for fun parties this tradition was lost and a very different form of going door to door began. As adults had parties and made merry to the monster mash (or whatever the equivalent for the time was) kids had very little to do. Kids began going door to door between parties playing tricks and having fun, by the 1940’s giving kids some treats was a easy way to avoid being pranked. They were given fruits and nuts and the occasional baked sweet treat.

It wasn’t until the 1950’s that baked treats fell out of fashion and packaged candy became the norm. American candy companies jumped at the chance to sell more, bringing out snack sized bars and Halloween themed sweets. This was sped along with the satanic panic in the 1970’s in which parents feared their children would be poisoned by neighbors with hand-made Halloween treats. Candy companies provided a safe alternative with pre-wrapped factory produced sweets.

From prayers to purgatory to pranks on your neighbors, trick or treat sweets became an integral part of Halloween as a celebration.

What sweets are associated with Halloween?

Synonymous with Halloween treats is this brightly coated fruit treat, the candy apple. Or the caramel apple, or the chocolate apple (arguably the worst one). This treat has routes in fruit preservation that date back hundreds of years but the candy apple we know and love started in 1908.

An American candy maker William W. Kolb created the candy apple while looking for a way to display his cinnamon candy on the run up to the Christmas season. However, people were very interested in it and he sold out quickly. This new candy apple treat was a hit which swept the nation and is now eaten around Halloween around the world.  This also means that the original candy apple was cinnamon flavoured… I think I’ll stick to the plain candy myself. Looking for a tasty candy apple, check out our list of sweet shops in Belfast to find out where to get one.

This is an American candy that predates having candy for Halloween, having been invented in the late 19th century. It’s a love it or hate it debate in America with around 49% of the population liking it. If you’ve never had it before, imagine a cheap fudge and you’ve got the picture.

A Northern Ireland classic. A spooky snack but also a great way to cling back to childhood Halloween nostalgia. For ultimate nostalgia put on a Disney princess outfit then slap on a big puffy winter coat, and eat a pack of these. Even though you can get them year round now, they will always be a Halloween staple in our hearts. Now, if Monster Munch could bring back the pickled onion ones that turn your tongue blue that would be appreciated.

This is one you may not know about unless you are a Halloween purist i.e. someone who carves a turnip instead of a pumpkin for authenticity or buries boots in your garden for the spooky vibes. Dating back to the times when trick or treating was about prayers for your eternal soul, Soul Cakes were a big part of early trick or treat traditions. Bearing a cross to signify that they were given as alms, a donation to the poor.

These early Halloween or All Souls Day treats are little flat biscuits or cakes (not about the ask the Irish courts about this one), which were flavored with spices and currants or raisins. They had a cross carved into the top and would be given out to those ‘Souling’ door to door. This was the original Halloween candy and is still a nice treat today.

Click here for a recipe on how to make soul cakes.

Fun Fact: Soul cakes aren’t the only baked good that is marked with a cross for spiritual or religious reasons. Hot Cross Buns, synonymous with Easter are also marked with a cross. Traditional Irish breads such as Wheaten Bread are also scored this way. Potato farls are cut in a cross shape from a circular bread as it was believed the cross would allow the fairies to escape from the bread, harking back to Celtic traditions.

What are the best sweet shops in Belfast for Halloween Treats?

Aunt Sandra’s is a Belfast institution know for their amazing hand-crafted candy and chocolates. They have been making sweets in Belfast since 1953 and have grown to be a well-known local favorite. Visit their shop in East Belfast for a wide range of sweets, chocolates, and delights. You can even see a little bit of behind the scenes magic of making the sweets as well. They even have workshops for Halloween including crafts and Halloween chocolate making. One of the best sweet shops in Belfast offering up classic sweets.

If you can’t make it out to the shop, you can always try and buy some of their great range in St George’s Market on Fridays, Saturdays, and Sundays. Their friendly staff and great samples will have you ready for the trick or treat season.

This amazing shop in Smithfield has been providing the people of Belfast with sweet treats for over 100 years. They have a great range of sweets from Belfast old favourite Chelsea Whoppers to American Candy staples like candy corn. Why not have a look around and see what amazing treats you can find for your Halloween celebration. They also have Halloween treats like candy skulls, perfect for trick-or-treaters or for you to eat while watching a classic horror.

One of the oldest sweet shops in Belfast.

A new kid on the block as far as sweet shops in Belfast go, the owner of this shop is bringing coffee, ice cream, and the UK’s best independent sweet creators together in one café. While there you can peruse their massive sweets wall making up a custom pick and mix from their dispensers. You can even through a birthday party for all you Scorpios out there to enjoy with craft workshops available too. Say no to boring sweet brands and find a new favourite for your Halloween party.  One of the biggest sweet shops in Belfast.

When visiting Joob Joobs its worthwhile having a look at Refill Quarter which is a great place to get sweets that are vegan, if that’s what you’re into.

Flossy Treats (Outside of Belfast but available for delivery)

Based outside of Belfast but offering delivery and treats worth a trek is Flossy Treats. They have an entire Halloween range including chocolate slabs, jellies, and mystery boxes. Check out their website for all their interesting sweets or if you are in Ballymena you can drop by for a visit.

Sweet treats have been a part of Halloween since the medieval age, why not continue the tradition and treat yourself.  Check one of the sweet shops in Belfast, new or old, and grab some tricks or treats this spooky season. Did we miss your favourite sweet treat spot? Let us know in the comments below.

Want to learn more about Halloween traditions? Check out our article on Samhain, the origins of Halloween or read about the best Spooky Staycation spots in England.

Irish Travellers: Getting to Know these Indigenous People