Street Murals Around the World 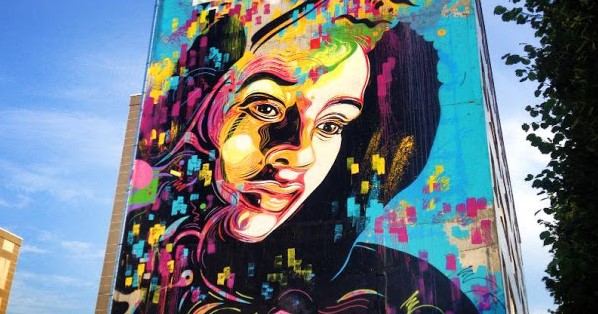 Every city you visit in the world offers its own unique street murals designed to captivate and amaze tourists and locals alike. Artists love to express themselves, meaning you can enjoy discovering their ‘canvas’ as you find your way around a new city.

There’s been a huge rise in the popularity of street murals, they seem to pop up everywhere you go. So we thought we’d explore some of the famous street murals/art around the world.

But first, let’s look at the history of street art and why it’s so special.

The History of Street Murals

The popularity of street murals/art started to take off at the end of the 20th century and the beginning of the 21st. We’ve seen street murals incredible transform into many forms of artistic expression.

These not only include graffiti art & murals but prints, larger scale painting and projects of artistic collaboration. Meanwhile, performative and video art is changing how we look at street art completely.

Street art has completely changed how we view and take in art.

It All Began with Graffiti Art

Graffiti was one of the earliest expressions of street art, appearing on buildings walls and cars as early as the 1920s. It’s thought to have been started by gangs during that time in New York City. The revolutionary culture of gangs and street art was highly felt in the 1970s and 1980s. Becoming a significant moment in the history of street murals/art during those decades.

It was a time when the young started creating a movement ultimately helping to transform the subculture phenomenon which was challenging the social and political reality of that period.

It soon turned into illegal activity and from vandalism began the evolution of artistic expression finding its way into galleries and the global art scene.

Street Art in the Modern World

In today’s modern world street art is more than just graffiti on a wall, many of these art pieces relate to socio-political activism. As artist’s express their unhappiness with the current social-political system through art. The saying a ‘picture paints a thousand words’ rings true in this instance.

Street murals were considered rebellious in popular culture and mass media reality. It was always used by those not in power to express how they felt about real life issues happening in the world. Street art gave birth to brilliant artists who created beautiful murals in return.

Street art has continued to stay relevant throughout generations, each adding their own unique style to the art form. And of course, it was becoming one of the most colourful displays of art around the world.

This incredibly detailed street mural on Glasgow high street was created by Australian Artist Sam Bates who goes by the street name as ‘Smug’.

The mural is a modern depiction of the St. Mungo miracles of ‘the bird that never flew’. For those like myself who didn’t know St. Mungo is Glasgow’s patron saint. The creation of the image is taken from one of his rhymes about a bird.

Smug is a great artist and has quickly become known as one of the most talented street artists around. He is known for his high-quality murals that often appear very realistic as you can see with the image above.

Smug is said to be inspired by the people he meets, helping him to create some unique street murals that make people stop and admire his work.

2. Girl with the Balloon Mural – London

This is one of the most world’s most recognised pieces of street art and is the work of the iconic artist Banksy. Not many people have seen his face; adding to the mystery of him and his art. The art piece depicts a little school girl holding a heart-shaped balloon.

It’s officially known as “There is Always Hope”. The street mural first appeared in 2002 helped bring to light Banksy and soon saw him obtain a huge following around the world.

This street mural has gone viral since then; appearing everywhere on the internet as well as on postcards, mug, bags and more. The piece is much loved by the fans of Banksy and was even released as an unsigned and signed prints in 2004/2005. Although its relatively low editions helped to make it more desirable as people wanted to get their hands on the art piece.

When you first look at this street mural you think it depicts a sad little child as her balloon floats away. But on further examination, you can see the young girl in Banksy’s painting is letting her balloon go as she stands still without any emotion.

The red heart-shaped balloon is meant to represent innocence, dreams and hopes. It can be interpreted in many ways; one being that the image shows the innocence of childhood lost and many people question whether the girl is letting go or retrieving the balloon. Banksy is renown for creating thought-provoking art pieces and allows the audience to take their own meaning from his work.

This amazingly detailed street art of pigs is located in Brussels, Belgium. Although this mural was created in 2002 it’s so impressive that you could believe it was only created yesterday.

This street mural is by the brilliant Belgium born artist ‘Roa’ whose work has often been photography. However, just like Banksy, there is very little knowledge about the artist.

What we do know is as a child Roa wanted to be an archaeologist and would often collect little skulls from birds & rodents to draw at home. Like many muralists, he started by spraying things under bridges and wall. Soon he became addicted to the nature of urban art.

Roa is known for his strong obsession with animals and rodents. Often combining life and death into his street murals which quickly helped to set him apart from other street artists. He has gone on to create hundreds of murals all around Europe and I think his work is very impressive.

Be on the lookout in the following cities for his street art: London, Berlin, Madrid, Moscow.

Next up is this amazing colourful 3D street mural created by Portuguese born artist Odeith in 2015. This mural needs no explanation with its simple message of how you need to do whatever you can to chase your dreams and never give up.

Incredibly its a unique one of a kind 3D street mural. Its one of those art pieces that you’ll look at more than once to get its full 3D effect.

The artist behind this street mural became internationally recognised in 2005 for his grounding breaking incursions in the anamorphic art.
Odeith drew attention because his artwork offered unique perspectives on a variety of surfaces often with a cool 3D effect.

5. Everyone is Searching for it – Milan

Next, we have this beautiful poignant street mural by Italian Artist Millo (Francesco Camillo Giorgino). Milo is one of Italy’s most prolific street artists, who shows no sign of stopping.

Milo is famous for his large-scale murals and monochromatic style. Most of his street murals are ‘simplistic’ matched with flashes of colour and fun elements. His impressive large-scale murals have helped him take part in some of Europe’s biggest street art festivals.

The best thing about Millo’s murals? His creativity in bringing fun and interesting murals that actually add to urban spaces.

Created in 2013 is this stunning & vibrant street mural of a young woman located in Paris, by artist C215.

The French-born artist whose real name is Christian Guemy is considered one of the best stencil artists in the world. And we can understand why as his street murals are incredibly detailed and appear very real. He crafted his talent while he was once in prison and for over 20 years, he has been creating street murals everywhere.

His main art focuses on creating self-portraits of local people, in his words ‘“faces, reflect the personality” of a city’. He often tries to draw portraits of people who society often neglects such as the elderly, refugees, beggar children. Christian has said he finds much of the inspiration for his street art through faces of random strangers he meets.

You can check out more of his incredible portraits online with a simple google search just like most of the artists on this list. Some of the cities you could search for his street murals are in London, Rome, Paris, Poland Brazil and more.

I had to include two street murals by the artist Hyuro as I really enjoy her paintings. Her beautiful black and white street murals often depicted women in a dreamlike style.

The Argentinian born urban artist is popular for her black and white paintings that are often focused on visual expression. She started out painting on canvas but upon meeting famous street artist Escif she gave street murals a go. Soon she became obsessed with creating street art around Europe. Although she does still produce painting and drawings.

Hyuro quickly began making a name for herself in the urban art scene by art portrayals of women who are often at the centre of her work.

She states the inspiration around her street murals:

“I am a woman, mother, housewife, lover, friend and a professional, it is from this set of roles that most of my inspiration arises.”

8. Nothing to Say – Valencia

Next up is the ‘Nothing to Say’ street mural located in Valencia by world-renown street artist Escif. Escif is famous for simultaneously creating art pieces that are wonderful to observe but also conveys important messages. He makes a conscious effort to make people stop and observe his street art and take away more than its visual display.

Escif started the following in regards to his artwork: “I’m not looking for decorative paintings, I try to wake up viewers’ minds.”

He has many street murals located around the city of Valencia and has managed to stay anonymous for the last 20 years since he first started painting. However, he first became known to the public in the ’90s for his minimalist black & white paintings. He has stayed very true to that style ever since and its what people recognise him for.

What I love most about his work are the simple figures and drawings that often have a deeper meaning to take away.

Another amazing street mural by Banksy that I had to share because it’s too good not too. ‘The Spy Booth’ street art was created back in 2014. It has quickly become one of the most popular street murals around the world.

The mural is meant to depict three government agents spying on phone conversations which relates to what was happening at the time. Banksy brilliantly chose Cheltenham, UK for the art piece as its the home of the Government Communications Headquarters.

Sadly though you can no longer visit this mural as it has been removed but still worthy of a mention, Banksy never lets you down with his incredible artwork.

Lastly but certainly not least is the amazing book mural created by JanIsDeMan & Deef Feed. Any book lovers out their will really enjoy this but what I love most about it, is the artists ask the local people what their favourite books were and painted the answers on the wall. I think it’s pretty cool, unique & personal to the people that live in that city.

We could include so much more amazing street murals from around the world but there is too many to choose. These paintings are magnificent, and each artist offers a different style and message to those who stop and appreciate their art.

Check out some related blogs that might interest you:

Live Music in Belfast: A Local's Guide to Entertainment