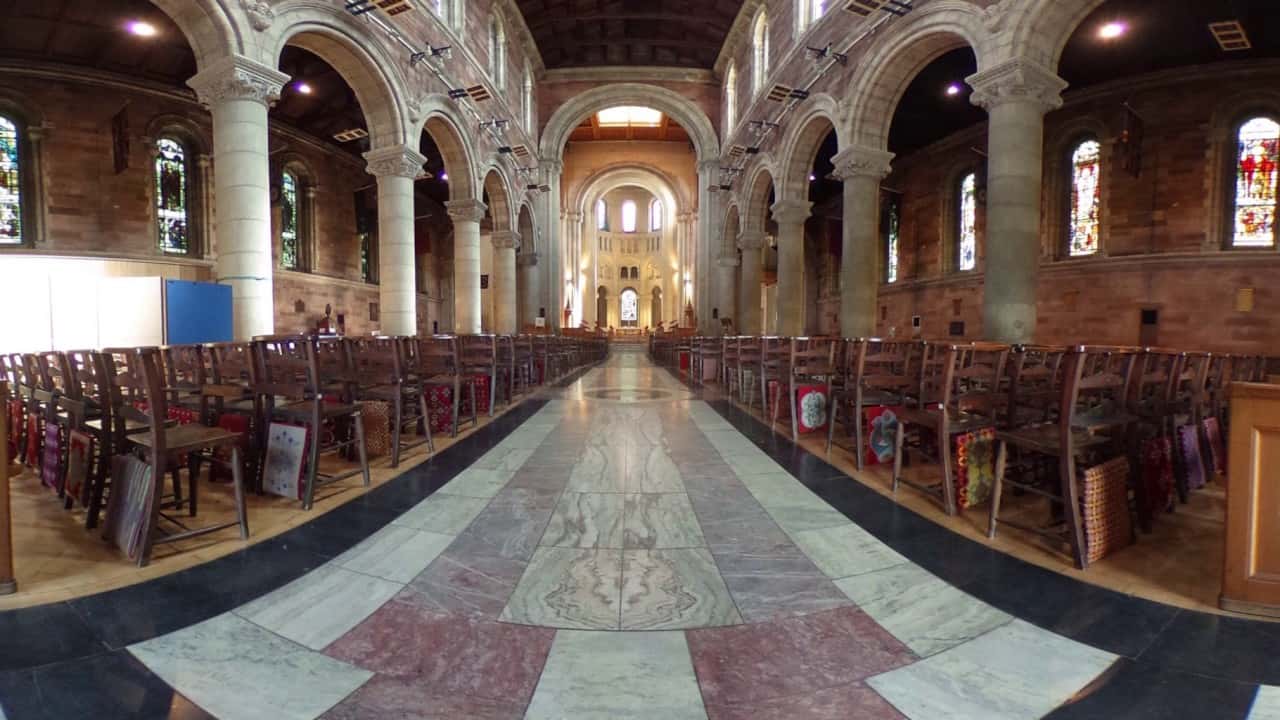 St Anne’s Cathedral was the main place of worship for Belfast Anglicans for over 100 years until the royal charter made Belfast a city in 1888 and they required a new cathedral with the capacity of 3,000 to 4,000 people. In 1941, the cathedral was almost destroyed by a German bomb, which caused extensive damage to surrounding properties.

The St Anne’s Cathedral was designed by architect Sir Thomas Drew and the foundation stone was laid on 6 September 1899 by the Countess of Shaftesbury. The Cathedral was constructed around former parish church of St Anne, named after the wife of the 5th Earl and 1st Marquess of Donegall, that was built in 1776 as designed by Francis Hiorne and continued in use until 31 December 1903. Afterwards the old parish was demolished.

The Belfast News Letter wrote at the time that, “On Saturday last, the Church of this town [in High Street] was thrown down, and on the Monday following the foundations of a new one were begun to be sunk.”

The Cathedral was built in the Hiberno-Romanesque style and took 3 years to finish its construction in 1981. In the main entrance, you’ll find a black-and-white marble floor that is laid out like a maze. The nave’s 10 pillars are embellished with carvings that symbolize aspects of Belfast life.

A memorial window was added to St Anne’s Cathedral to commemorate the men and women who served with the 107 Ulster Brigade.

In 1924 it was decided the west front of the cathedral was dedicated as a memorial to the Ulstermen and women who had served in the Great War.

The Cathedral contains detailed mosaics by the sisters Gertrude and Margaret Martin, who, between 1928 and 1932, worked at St Anne’s Cathedral, Belfast, designing and producing mosaics in the Baptistry.

A plaque within the St Anne’s Cathedral was also put in place to commemorate those who fell in the battle of Dunkirk, from 10 May to 4 June 1940. The plaque says, “To the glory of God and in lasting remembrance of those who died in the battle for Dunkirk, 10 May – 4 June 1940, erected by their comrades who survived to form The Ulster Branch – 1940 Dunkirk Veterans Association”.

Self-guided audio tours are available at St Anne’s Cathedral with your own personal audio guide to take you on a 40-minute tour of Belfast’s magnificent cathedral.  The tour guide will take you through the Cathedral’s story and the history of the city, its artefacts, and the people who helped shape this sacred place.

In 1976, the Dean of Belfast, Samuel B Crooks, started his annual Christmas tradition of spending the week leading up to Christmas on the steps of the cathedral, accepting donations large and small from passers-by, which were then distributed amongst many local charities. Dean Crooks soon became known as the “Black Santa”, because of the outfit the cape he wore to keep warm. The tradition has been carried on by his successors.

Nearby Attractions to St Anne’s Cathedral

The museum houses an extensive collection of uniforms, badges, medals and regimental memorabilia covering the history of the Regiment and the campaigns in which it has fought since its formation in 1793. The collection is well supported by digitized records and books.

In 1906, the Belfast City Hall was inaugurated during a time of prosperity and industrial advancement for the city of Belfast.

The City Hall was designed by Alfred Brumwell Thomas in the Baroque Revival style at a cost of around £369,000 (equivalent to 128 million pounds today).

Cultúrlann’s provides a meeting place for visitors and locals, as well as its arts programme, promotes Irish language and culture.

Visitors can tour the interactive space and learn more about the development of the Irish language and culture in Belfast and on how it also influenced the English language.

Also close to St Anne’s Cathedral is Sentry Hill is a 19th-century farmhouse in Carnmoney which showcases numerous artifacts and archives collected by the McKinney family over the years.

The extensive collection provides visitors of an idea of what the working lives, social activities, beliefs and values of rural families in Ulster during the 19th and early 20th centuries were like.

Clough Castle is an Anglo-Norman castle that was built as a look-out for defense purposes, dating to the mid-thirteenth century. The Castle overlooks the routes east to Downpatrick, south to Dundrum and north to Belfast Lough.

The Garden of Remembrance is dedicated to Irish Republican Volunteers and civilians who lost their lives during the Easter Rising (1916) and the Troubles (1969–1998).

Walk through CS Lewis Square and rediscover one of his greatest works, The Chronicles of Narnia. The Square was put up to commemorate the Belfast-born author. It showcases several bronze sculptures from The Lion, The Witch and The Wardrobe, including Aslan, The White Witch, Mr Tumnus, The Beavers, The Robin and The Stone Table.