Sea Sessions: The Biggest Music and Surf Festival in Ireland 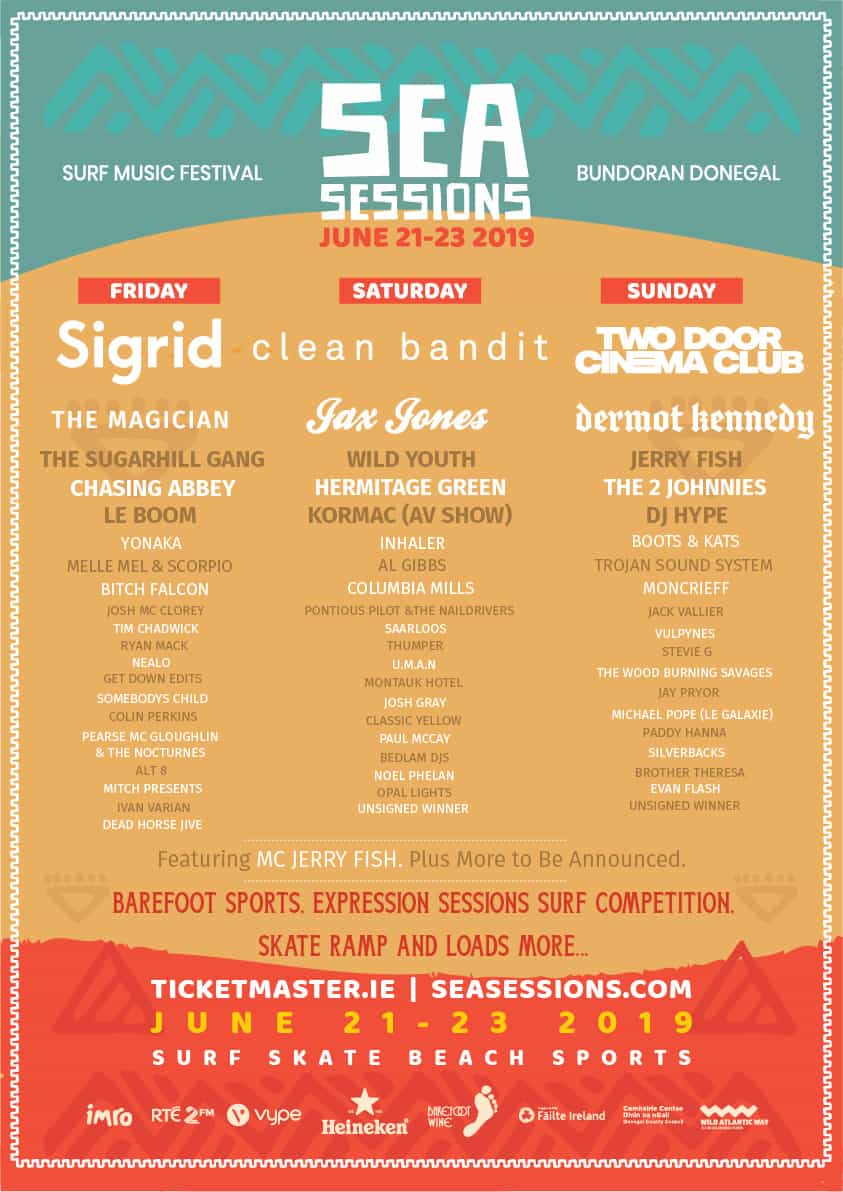 One of our personal favourite Irish music festivals is the award-winning Sea Sessions, returning for its 11th year in June 2019.  For the last 11 years, the ever-growing and popular Sea Sessions festival has taken place in the lively seaside town, Bundoran, Donegal, along the stunning Wild Atlantic Way.

This is one of the first Irish music festivals taking place this summer, helping to kick start an amazing summer of festivals and events around the country. It’s considered one of Europe’s best music and surfing festivals.

Sea Sessions is a three-day event, where some of the world’s most talented bands and acts come to Donegal. It’s also famous for its surfing competitions, there really is nowhere better to experience Irish waves than in Bundoran. Sea Sessions offers an unforgettable experience in Donegal filled with music, surfing, partying and Irish craic.

Keep reading to find out how the festival began and why it’s become one of the best festivals in Ireland and Europe.

The Beginning of Sea Sessions

The Sea Sessions Music and Surfing Festival first started out as a small Irish festival in 2007, showcasing some of the best local talent and smaller international acts and bands. Since then it has been a huge success, growing each year with better bands, better camping facilities and more people buying tickets. Nearly every year sells out, the line up isn’t short of incredible.

Bundoran acts as the perfect location to host the festival, it’s considered a surfing paradise, where you’ll find amazing Irish pubs, restaurants and cools shops, everything’s pretty much within walking distance from each other.

The success and popularity of the festival has been recognised with awards, in 2017, it was named ‘Festival of the Year‘ at the Chambers Ireland Excellence in Local Government Awards.

It’s one of the most respected small Irish festivals, renown for it’s premier music, camping and surfing events. 2018 saw Sea Sessions expand its capacity by 60 per cent, with the festival site doubling in size.

The 2019 Sea Sessions Festival is literally around the corner, taking place between the 21st and 23rd of June. If you still haven’t got a ticket, you might want to hurry up because the event is always a sell-out and this year’s lineup is one you don’t want to miss out on.

On Friday the 21st of June, the main headline taking to the stage is the talented pop star, Sigrid. You’ll want to catch her because she’s already blowing up on the music scene and has quite the growing fanbase.

The past two years have been extraordinary for Sigrid, her debut EP ‘Don’t Kill My Vibe’ was released in 2017 and a year later she released her critically acclaimed Ep Raw. She is popular for her unique voice and catchy hits that make her a great addition to the Sea Sessions Hall of Fame.

There are many more exciting bands and acts performing on the 21st including The Magician, The Sugarhill Gang, and Chaing Abbey.

Saturday the 22nd of June, will see the modern pop band, Clean Bandit headline Sea Sessions. Clean Bandit is one of the most popular bands around at the moment, always putting on fun performances. They are renown for their unique blend of electronic, dance, R&B and pop songs. You can be sure to catch them perform some of their best hits at the festival including ‘Symphony’ and ‘Rather Be’.

The last day, Sunday the 22nd of June also has a stellar line-up, with the popular Irish indie rock band, Two Door Cinema Club taking centre stage. They are the second most successful band to come from Bangor after Snow Patrol. Since releasing their debut album in 2010, the band has since gained massive success, touring all around the world. They are sure to put on an unforgettable performance at the Sea Sessions.

Besides the amazing music and acts at the festival, the exciting surfing events are also not to be missed. Known officially as the ‘Surf Expression Session’ that will welcome some of Europe’s most incredible surfers to Bundoran, to compete for a massive 2500 euro cash prize. Surfers will compete to show off their best moves, pushing themselves to the limit, with the testing Irish sea.

Surfing stars such as Reubyn Ash from the UK will be back, hoping to win the title again but he will have to play against last years local winner Gearoid McDaid.

Its definitely set out to be a thrilling watch for anyone interested in checking it out. The surfing contest will take place either at Bundoran’s main Beach, Tullan Strand or the Peak.

Why Sea Sessions is One of Ireland’s Best Music Festivals

It’s Ireland only music and surfing festival but Sea Sessions is a brilliant festival for many reasons.

Each year the line up gets even better than the last with some world famous acts coming to Donegal. It’s much different than seeing your favourite artist live, the festival experience is unmissable. You’ll also get the opportunity to check out some up and coming local talent before anyone else.

What we personally love the most about the festival is its beautiful location in Donegal. Donegal was recently voted the “Coolest Place on the Planet” by the National Geographic Traveller Magazine. Bundoran is a stunning spot and with the festival literally on the doorstep of its main beach, making for the most perfect backdrop to Sea Sessions.

If you visit Bundoran any other time of the year, it’s quiet and peaceful but Sea Sessions brings a whole new side to the town. The place livens up with young people coming from all around the country to enjoy the festival. You will leave Bundoran making memories that will last a lifetime.

The camping site available in Bundoran is one of the best, overlooking the beautiful Tullan Strand beach. It’s just outside the main street of Bundoran, meaning you don’t have to be quiet and can have lots of fun with your friends and all the new people you’ll meet. The camping facilities are clean and right next to the festival making it very convenient for visitors.

Sea Sessions is the Irish festival you don’t want to miss, whether you get tickets this year or not, make sure it’s on your Irish bucket list of things to experience!

Also, Have you ever been to the Sea Session festival? We would love to know what your experience was like and what you enjoyed most 🙂

Royal County Down Golf Club: One of the Oldest Irish Courses