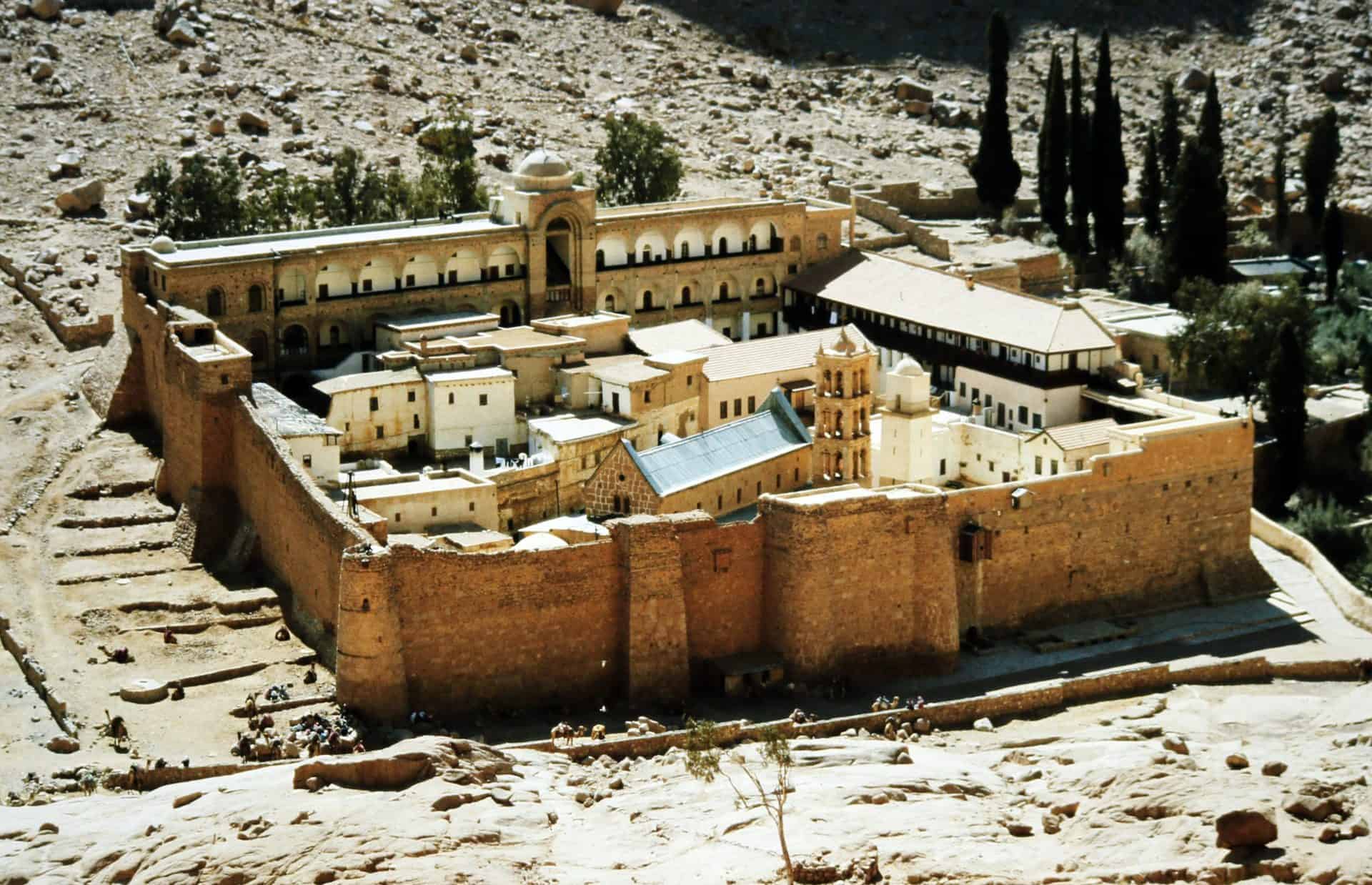 Saint Catherine is located in South Sinai, Egypt, below Mount Catherine, which is one of the highest mountains in Egypt near Mount Moses. It is a famous tourist destination and contains one of the world’s oldest working monasteries. The monastery was built in the 4th century when Empress Helena, mother of Emperor Constantine, ordered it to be built and it was named after Saint Catherine, who was from a pagan family and believed in Christ as a result of a divine vision and as a result of that the emperor ordered her torture and beheading.

It is one of the most important touristic, religious, and entertainment locations that you can visit, and the monuments displayed in the monastery are still one of the most famous religious symbolic items in the world.

Who is Saint Catherine?

Saint Catherine was from an aristocratic and pagan family, the daughter of the Governor of Alexandria. She was born in Alexandria c. 287 AD and her real name was Zorisa. She studied theology and philosophy under the most prominent scholars and when Emperor Maximinus II came to Alexandria, she refused to submit to his persecution and idolatry and he ordered 50 orators to convince her, but after they met her and listened to her, they converted to Christianity.

In 307 AD, the emperor ordered her execution, and her remains were found centuries later. Her influence carried on through the centuries, as one of the Monks at the Saint Catherine Monastery had a dream of a group of angels carrying her body and placing it on the top of a mountain in Sinai and that is where her remains were found. The remains were later transferred to the Church of the Transfiguration built by Emperor Justinian inside the monastery in the sixth century.

Things to Do in Saint Catherine:

The first thing to visit in Saint Catherine should be the Transfiguration Church. You enter through the front yard, and then through a side stairway you will finally find yourself inside the church. Inside, you will find hundreds of decorations and crosses, and an altar door, topped by a huge platform on which Christ stands crucified.

The church was built by order of the Byzantine Emperor Justinian, who hired the most skilled artists to decorate it magnificently. The church includes 3 heavy granite columns separating the church corridors, and its walls are decorated with paintings of saints from top to bottom. Inside the church, you will also see a great niche, containing a decorated coffin, and this sarcophagus contains the relics of Saint Catherine and also a wonderful mosaic panel which is the Transfiguration painting, which dates back to 542 AD.

When you leave the church, you will find yourself in front of a pit, surrounded by a small wall and with a glass barrier above it; this is the Well of Musa. This well is where the Prophet Moses met his wife for the first time when she came to him asking for help to fill her bucket with water from the well and then she invited him to her father’s house.

Moses went with her, and it was there that he met another Prophet, Shuaib, who agreed to hire him to work for him for eight years in exchange for his daughter to marry him. He worked for her father for 10 years, before he married her and returned to his people.

The Holy Bush Tree is known from the story of the Prophet Moses. It is said that once, when he returned to the area of Saint Catherine, it was really dark and he saw fire in the distance. It is at this location that it is said that God spoke to Moses.

You will find the tree a few meters beyond the well. It is a rare tree that grows only in the monastery of Saint Catherine and has a special place among Christians and Jews. A wall was built around the tree to protect it. The tree is also quite unique, as some botanists took samples of its roots to plant them in other regions in the world, but the plants that came out were different from the original tree, but when it is regrown in Saint Catherine, it is similar to the original plant.

The Monastery Library was built in the 6th century. It contains an important and unique collection of religious and historical documents. It is known as the second most important library in the world, in terms of the value and number of sacred Christian manuscripts, after the Vatican Library. Inside the library, you will find about 4,500 manuscripts, two-thirds of which were written in the Greek language. It also contains an archival reference that contains correspondence from and to the heads of the monastery and different emperors, as well as archaeological records, maps, and pictures.

There you will find some important manuscripts and documents in the library like a copy of the Four Gospels, the manuscript of the Greek Torah, and is known as Codex Senatechos. The library contained ancient copies of the Bible, but they were stolen and transferred to Russia and then sold to the British Museum in London between the years 1949 and 1950.

The museum is located to the west of the Transfiguration Church and it is also called The Sacred Treasury. The museum includes a variety of religious, artistic, and symbolic manuscripts, along with treasures, such as the Syriac Gospel of the 4th century; the law of monks in Syriac is written on parchment of a deer that regulates the life of monasticism in the 11th century, and the Gospel of John in Arabic, which is newly discovered dating back to the 11th century, along with the Cosmas the Navigator manuscript of the 12th century and much more.

The mosque is located on the northwestern side of Saint Catherine’s Monastery and faces the main church. Its minaret joins the church steeple and it is one of the famous mosques in South Sinai. When you enter the mosque, there are three niches and a wooden pulpit dating back to the Fatimid era, and a minaret made of granite stone.

It was built during the Fatimid caliphate, in the year 1106 AD, and the evidence for this is the presence of a wooden candlestick chair inside the mosque with a written text from the era of construction in which the name of the founder of the mosque who is Al-Hakim is inscribed. He built this mosque and three other mosques, one of them on Mount Moses sits at an altitude of 2,242 meters above sea level.

There is also a written text in the mosque engraved on the front of the pulpit in Kufic script with the date of construction and the name of the originator of this pulpit assigned to the mosque, which is Al-Afdal Bin Badr Al-Jamali in 500 AH.

The garden is located outside the monastery walls, on the northwestern side of the city. The garden is covered with tall trees and it produces many kinds of vegetables and fruits. The garden has a private wall and a secret door since the 6th century that leads from the monastery to the garden.

Inside, you will see three wells and three springs, including a Makarios well at the top of the garden with a depth of 15 m and its water in the summer is cold as snow and was said to be the oldest garden well and was dug by the monastery engineer. The three springs are at the bottom of the garden, one of them is a prolific spring in the east of the garden called Birkat al-Dawar, whose water flows into an underground channel, irrigating the eastern side of the garden. The garden also includes perennial trees, honeydew, and a modern olive press used to squeeze olives inside the monastery.

These were the famous things that you can do when you visit Saint Catherine’s Monastery, but there are also some famous places near the area that you can visit and enjoy.

One of the famous attractions in South Sinai and a beautiful place to visit, it was called Jabal Musa after the Prophet Moses, as it is where God spoke to him. The height of the mountain is 2,285 meters above sea level. There are three mountain peaks; including the summit of the Manajah where God spoke to Moses and now there is a small church built on the top of it. There is also the summit of Mount Safsafa, where Moses was standing when he delivered the Ten Commandments to his people, as they were standing in the Plain of Raha, which lies to the northwest.

There are two paths up the mountain, a strenuous path is known as Steps of Repentance and is thought to have been constructed in the 6th century and it contains 2,500 stone-cut steps to the summit and the other path is the Camel Trail, which is preferred by climbers.

It is considered the highest mountain in Sinai, with a height of 2,642 meters and it can be very cold on the top, and snow lies in crevices in the rock even during the summer. When you reach the top of the mountain, you will see a small chapel where there are marks left by Saint Catherine’s body, which is said to have lain there after her execution for 300 years. Also, you will be able to see a magnificent view of the sunset from there and don’t forget to take some lovely pictures.

It is located on the west side of Mount Sinai and contains many holy sites and inside the valley, there are the ruins of several huts, a chapel that was dedicated to messengers but never used, and a ruined monastery called El Bostan. Then behind the monastery, you will find the Stone of Moses, from which Moses drew water by striking it with his rod and a high block of reddish-brown granite divided into two parts. There is also the monastery of Al-Arbain, surrounded by a garden and a spring. It is a lovely area where you can spend some time exploring it.