The Full Travel Guide to Rotterdam: The Gate of Europe 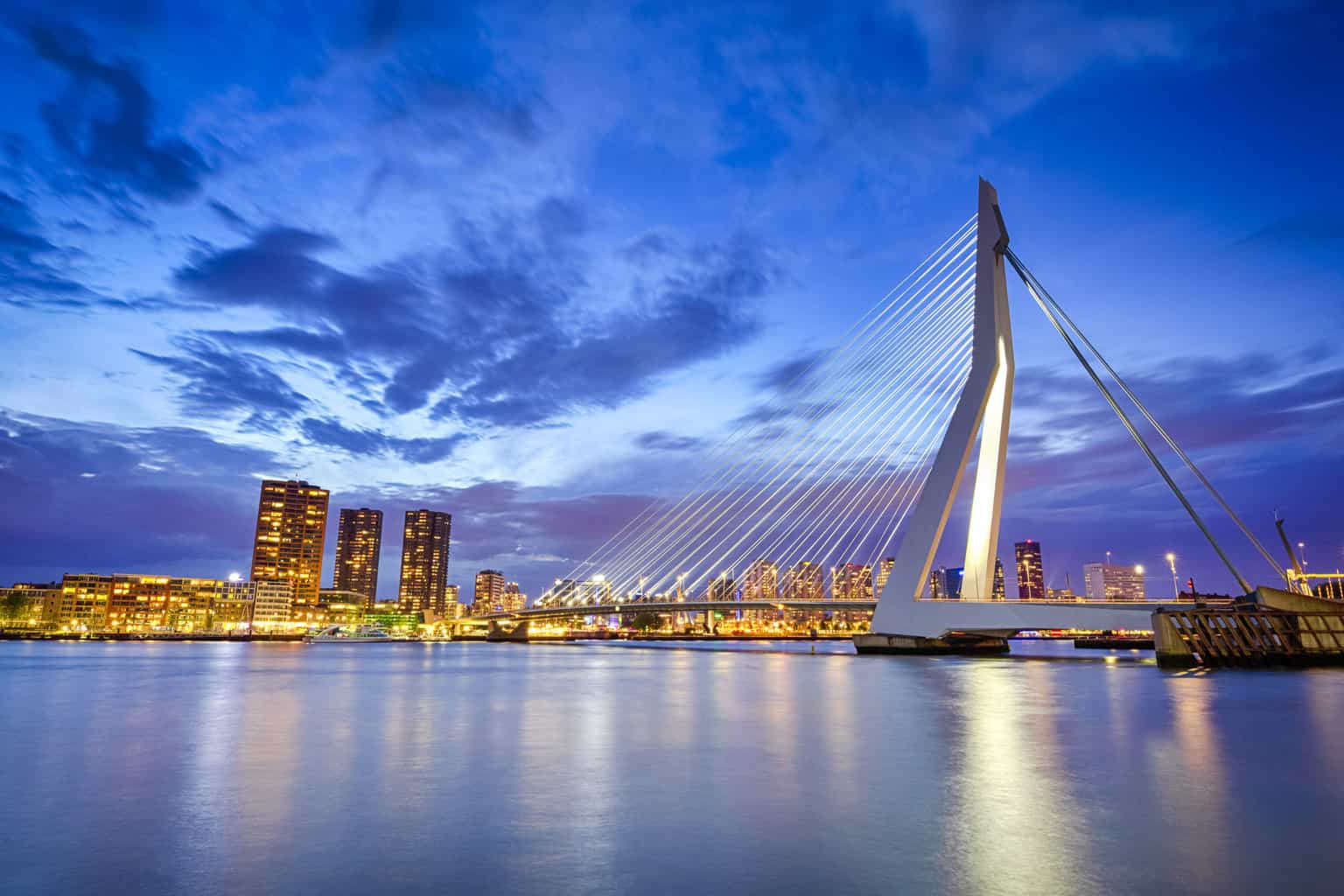 Rotterdam is one of the most important Dutch cities. It is considered the second-largest city in the country. It has been described as a city with multiple faces, so everyone who visits it returns to it again and discovers it differently.

The city of Rotterdam is on both banks of the Nieuwe Maas River in the southern part of the Rhine Island and lies on the delta of the North Sea. The North Sea is formed by combining three rivers: the Moise, the Rhine, and the Scheldt.

Rotterdam depends on its economy of various companies and primarily on maritime transport, and it is one of the most important economic cities in the Netherlands. There is a company called Dutch East India, founded in 1602 and was the first company accredited in the world in this field.

Rotterdam occupies a distinguished tourist place in the Netherlands, as the city enjoys permanent innovation and vitality and is one of the most renewable cities. And it has many elements of tourist attractions, which are represented in museums, markets, high-end restaurants, art galleries, and skyscrapers.

The history of Rotterdam dates back to 1270. It was built after constructing a dam on the Rott River; that’s why Rotterdam was named after this river.

The city began to grow and prosper to become a famous city, making it one of the largest railway transportation centres and a sea gateway to all of Europe. For this reason, it is called the Gate of Europe because it contains a seaport considered the largest port in the world.

In 1940, especially during World War II, the city was subjected to a violent bombardment, which destroyed a large part of it. After the war ended, it was rebuilt and bypassed, making it one of Europe’s most modern and architectural cities.

Rotterdam’s climate is influenced by the ocean, which is humid and rainy and is also affected by the North Sea. The winter is cold, and the summer is pleasant. The average temperature is between 3.5 and 17.5 degrees in January.

Winter extends from December to February, summer is from June to August, and the best time to visit the city is from May to September.

Things to do in Rotterdam

Rotterdam is one of the most important Dutch cities in tourism. Millions of tourists visit it throughout the year to enjoy its atmosphere, history, and structure in a more than excellent style.

The city is characterised by its maritime heritage, which is an essential thing in it, along with many of the most important tourist attractions in Rotterdam, which we will get to know about in the coming part.

The Museum of Boijmans Van Beuningen is one of the most famous and influential art museums in Europe, and it includes different collections of paintings from all over Europe.

The great St. Lawrence Church is one of the few medieval buildings left in the city after most buildings were destroyed during World War II. It is a Gothic church built in the 15th century on marshy ground, giving it a lean that was halted after its foundation was rebuilt.

The church is of the top attractions that you can visit in Rotterdam. When you enter the place, you will be impressed by the interior design with the coloured glass of its windows. One of the favourite things in the church is the three Danish organs, the largest of which stands on a marble base, and you will also see the bronze door of the entrance.

Rotterdam Zoo is considered one of the oldest zoos in the Netherlands. It was built in 1857, includes many animals you would love to see, and is a perfect place for the family. The zoo contains elephants, a rare red panda, and more.

Also, there are natural habitats that you can visit in the zoo, such as the Asian one, which includes a forest with two large aviaries for birds. The zoo has an aquarium with an extensive collection of marine life from the Americas.

Rotterdam’s old Harbour is a part of the Maritime District. It is like a boat basin filled with historic boats, and you can visit the place, especially in summer when the weather is good, and enjoy one of its outside cafes or restaurants while watching the boats being painted and repaired.

Near the old harbour, you will find the Maritime Museum Rotterdam, established in 1873, which gives you a great look at the sea. The collections display the history of shipping, including ship models, maritime paintings, and the reconstruction of a 2,000-year-old vessel.

Another famous tourist attraction is the Maritime Museum Harbour, which is known as an open-air facility that is home to an old lightship, and more than 20 historic vessels.

The Kinderdijk Windmills are on the Noord River and are about 23 km east of Rotterdam within the village of Kinderdijk. The place is one of the most visited places in the Netherlands, it is also called the children dyke, and there you will find 19 windmills built in the 18th century. It is also known as UNESCO World Heritage Site.

The windmills comprise the most significant surviving concentration in the Netherlands and are considered a history celebrated during Mill Days. You can visit the museums in the Blookwer and Nederwaard mills and explore them from the inside.

The Euromast is a famous spot north of the Maastunnel in Rotterdam. It was built in 1960. It is a 185-metre-high tower with two restaurants situated on metre 92, giving you a magnificent view of the city.

If you love to have more adventure, you can try to abseil down the building, and you can reserve one of the two suites that are located at the 100-metre point.

Museum Rotterdam is the perfect place to visit to learn more about the history of Rotterdam. It was built in the 1950s and displays many artworks from the 17th and 18th centuries, documents, and artifacts.

Another place you can visit is the Coolhaven annex, which was dedicated to World War II. It was opened in 2015 and includes exhibits related to the Dutch wartime.

The market hall was opened in 2014, it is like a vast office complex, and it is known to locals as Koopboog, and when you go there, you will see a soaring arched ceiling of its food hall, and there are plenty of fish, vegetables and many other products.

Also, besides buying food and vegetables, you can find fast food and excellent restaurants that serve traditional Dutch dishes, Indonesian dishes, Spanish tapas, and many other cuisines.

The Coolsingel is also known as the city’s cool district, it is well-known as the main street of Rotterdam city centre, and it is where the city Town Hall located. The building was built between 1914 and 1920 in a Dutch Renaissance style, it wasn’t bombed during World War II, and when you visit the place, you will love the interior design.

In the street, on the opposite side of the Town Hall, you will see a war memorial designed by Mari Andriessen. Also, there is the Beurs World Trade Centre with a facade of greenish-blue glass.

Don’t miss visiting the Bijenkorf, a department store built in 1958. Close to it, at the northwest of the city, you can find the De Doelen, a concert hall rebuilt in 1966 after being destroyed in 1940, offering great concerts for about 2,200 people.

The Cube Houses are one of the famous representations of modern architecture in Rotterdam, designed by Dutch architect Piet Blom, and you can watch them while walking by the Old Harbour.

One of the famous cube houses is the Snow Cube. It is open to visitors, and inside, you will learn more about the cube houses’ history.

Miniworld Rotterdam is one of the most beautiful attractions for kids, it is in a large warehouse, built on an area of 535 square metres, and it includes many of the Netherlands’ attractions on a miniature scale.

The place displays about a 3 km long network of model rail tracks with 150 trains moving around, and a collection of 1,800 pieces of rolling stock between them. The Miniworld shows you some of the attractions you visited in Rotterdam on a small scale, and don’t forget to visit the Miniworld workshop to see how the trains are controlled from the command centre.

Delfshaven is one of the oldest districts in Rotterdam, it survived the bombing of the city in World War II, and the beautiful design of its buildings, made it a tourist attraction in Rotterdam.

The Dutch adored the district for being the birthplace of Admiral Piet Hein. He was known as a country hero in their war against Spain. And for the Americans, it is known as the notable place for the Old Church where the last service was held in 1620.

Boat Tour of the Europoort

Rotterdam is famous for its port that represents half of the city’s area, the Europoort is known as the Gateway to Europe, and the boat tour gives you a chance to see storage facilities built to serve one of the busiest ports in the world.

The tour will show you the port areas at Maeslantkering near Hoek van Holland and includes a quick look at the surge barrier. And while you are touring on the boat to see the famous landmarks in Rotterdam, you will also see the magnificent Erasmus Bridge.

Wereld Museum, founded in 1883, is also known as the World Museum; it is one of the destinations you should visit in Rotterdam. The place includes more than 1,800 artifacts from all over the world. It also holds many events and lectures throughout the year, and there are restaurants and cafes at the museum.

It is an excellent place for people who shows interest in developing various architectural movements over the years, it focuses on the Dutch style, and many other styles can be found there.

When you are at the Het Nieuwe Institute, you will find more exhibits, you can go to the Sonneveld House, an example of the modern architectural style from the 1920s, and there are shops and cafes located there for you to have a good time.

The Chabot Museum also hosts artworks of the Dutch painter Henk Chabot in a white villa built in 1938. You can visit another museum called the Netherlands Photo Museum, which includes a collection of historical images.

The cosy peaceful atmosphere of this monument does great justice to Chabot’s sculptures and paintings and to artworks by his contemporaries.

With all these beautiful places you will be visiting in the city, you will be looking for a hotel to stay in it to have some rest and relax; here are some hotels that are in Rotterdam:

The Eastern Cape - Best Activities to do