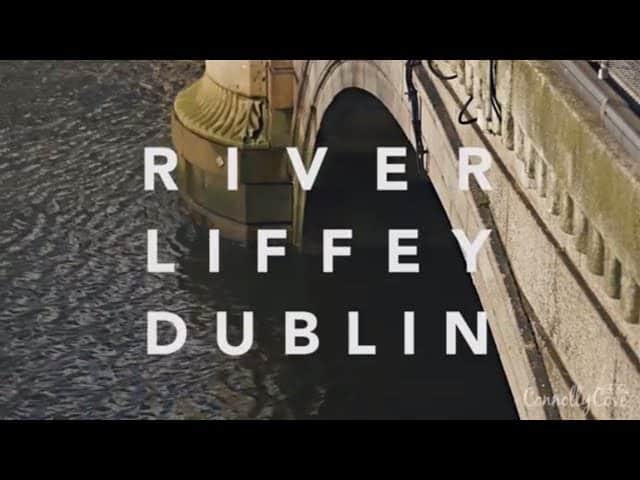 River Liffey is a river which flows through the center of Dublin, Ireland. The river supplies a wide range of recreational activities and entertainment for all age groups.

The previous name of River Liffey is An Ruirthech, which means “fast runner”. It was also known as the Anna Liffey, possibly an anglicization translation of Abhainn na Life, the Irish phrase that literally means “River Liffey”.

River Liffey’s significance goes back to the first settlers in the area, who saw its potential as a water source to help nourish their families.

The first Viking settlers came to the area over 1200 years ago sailing up the river and settled near where Wood Quay stands today. They searched the river and its banks for food and they also built shelters and simple wooden bridges

After the Vikings, the Normans came to Dublin through the Wicklow Mountains in 1170. The towns surrounding the River Liffey continues to grow over the next few centuries, with shops and houses.

A major part of these new constructions were the bridges and quays.

The first bridge to be constructed across River Liffey was built in 1014. The bridge was quite a simple wooden structure and underwent many renovations over the years.

In 1428, the first masonry bridge in Dublin was built at the same spot and thereafter known as Dublin Bridge, Old Bridge, or The Bridge. However, it was replaced in 1818 by Whitworth Bridge, designed by George Knowles, and named in honor of the Lord Lieutenant at the time. In 1938, it was renamed for Father Theobald Mathew.

The Anna Livia Bridge, formerly Chapelizod Bridge, was built in 1665 and renamed in 1982 to mark the centenary of James Joyce‘s birth. (The bridge is mentioned in Joyce’s Dubliners. Anna Livia is the personification of the River Liffey, and a principal character in Joyce’s Finnegans Wake).

Barrack Bridge was built in 1670. Also known as Bloody Bridge, it was replaced by the Victoria & Albert Queen Victoria Bridge in 1859 and renamed in 1939 after Rory O’More.

Arran Bridge was erected in 1683 and destroyed by flooding in 1760, only to be replaced in 1763 by the oldest current bridge linking Arran Quay and Queen Street and named Queen’s Bridge. It is commonly referred to as Queen’s Street Bridge, Bridewell Bridge, Ellis Bridge, Queen Maeve Bridge, Mellow’s Bridge or Mellowes’ Bridge.

Another structure that was destroyed by nature’s hand was Ormonde Bridge in 1802. It was replaced by Richmond Bridge and renamed for Jeremiah O’Donovan Rossa in 1923. Ornamented with several sculptures, they represent Plenty, the Liffey, and Industry, Commerce, Hibernia and Peace.

O’Connell Bridge (originally Carlisle Bridge) was designed and built by James Gandon in 1798.

The Ha’penny Bridge, originally called the Wellington Bridge and later officially renamed the Liffey Bridge, was built in 1816.

The Loopline Bridge links between north and south Dublin. It was designed by J Chaloner Smith in 1891.

The Millennium Bridge is a pedestrian bridge between the Ha’penny Bridge and Grattan Bridge. The James Joyce Bridge, designed by renowned Spanish architect Santiago Calatrava, was opened in 2003. Joyce’s short story “The Dead” is set in Number 15 Usher’s Island, the house facing the bridge on the south side.

The Samuel Beckett Bridge, designed by internationally renowned architect Santiago Calatrava, was opened in 2009 between the Talbot Memorial Bridge and the East-Link Bridge to link Guild Street north of the Quays with Sir John Rogerson’s Quay on the south. The bridge is capable of rotating through an angle of 90 degrees to accommodate maritime traffic.

At Chapelizod, the river is used by private, university and Garda rowing clubs.

Since 1960, the Liffey Descent canoeing event has been held every year covering a 27 km course from Straffan to Islandbridge. The Liffey Swim takes place every year as well between Watling Bridge and The Custom House. A number of rowing clubs overlook the River Liffey, including Trinity College, UCD, Commercial, Neptune, and the Garda rowing club.

The River Liffey is also widely used for recreational activities, such as canoeing, rafting, fishing, and swimming.

James Joyce embodies the river as the character of Anna Livia Plurabelle in Finnegans Wake.

“riverrun, past Eve and Adam’s, from swerve of shore to bend of bay, brings us by a commodius vicus of recirculation back to Howth Castle and Environs.” – James Joyce, Finnegans Wake

“A skiff, a crumpled throwaway, Elijah is coming, rode lightly down the Liffey, under Loopline Bridge, shooting the rapids where water chafed around the bridgepiers, sailing eastward past hulls and anchorchains, between the Custom House old dock and George’s quay.” – James Joyce, Ulysses

“That there, that’s not me – I go where I please – I walk through walls, I float down the Liffey – I’m not here, this isn’t happening” – Radiohead, “How to Disappear Completely” from album Kid A

“No man who has faced the Liffey can be appalled by the dirt of another river.” – Iris Murdoch, Under the Net.

“But the Angelus Bell o’er the Liffey’s swell rang out through the foggy dew.” – Canon Charles O’Neill, The Foggy Dew.

I found a place in India so far across the foam

Gaelic Storm, “Punjab Paddy from album How Are We Getting Home?” .

I watch the new glass cages, that spring up along the quay

My mind’s too full of memories, too old to hear new chimes

Fusiliers’ Arch is a monument located at the Grafton Street entrance to St Stephen’s Green park, in Dublin, Ireland. Erected in 1907, it was dedicated to the officers, non-commissioned officers and enlisted men of the Royal Dublin Fusiliers who fought and died in the Second Boer War (1899–1902).

Kayaking Activities on the River Liffey

You can rent a kayak for two hours during the morning or afternoon through City Kayaking, which is situated at Dublin City Moorings. It is considered one of the best ways to view the city of Dublin, and you’ll be in safe hands as you go with instructors. If you’re interested in photography, it is also a great location to capture stunning images.

St Stephen’s Green is a public park located in the center of Dublin, near River Liffey. The landscape was designed by William Sheppard, and the park was officially opened on 27 July 1880. The park is adjacent to Grafton Street and shopping center; one of Dublin’s main shopping streets. The 22 acre park is the largest park in Dublin’s main Georgian garden squares.

One of the most outstanding features of the park is a garden for the blind with scented plants that are labelled in Braille. A large lake also spans most of the park that houses many ducks and other waterfowl.

The Fusiliers’ Arch stands at the Grafton Street corner commemorating the Royal Dublin Fusiliers who died in the Second Boer War. A fountain representing the Three Fates can also be found next to the Leeson Street gate. A seated statue of Lord Ardilaun, the man who gave the Green to the city, can be seen on the western side.

Among the notable features of the park is also the Yeats memorial garden that includes a sculpture by Henry Moore, as well as a bust of James Joyce facing his former university at Newman House, in addition to a memorial to the Great Famine of 1845–1850 by Edward Delaney.

Temple Bar is a cultural quarter in Dublin, Ireland, that is a popular tourist destination. The area is surrounded by the Liffey to the north, Dame Street to the south, Westmoreland Street to the east and Fishamble Street to the west.

Temple Bar is described as Dublin’s “bohemian quarter.” It is full of opportunities for entertainment, art, and culture and is often listed as one of Dublin’s top attractions.

Temple Bar is filled with numerous restaurants, cafés, pubs, hostels, and hotels. You can also find shops selling everything you’re looking for. For those interested in art, you can also visit a variety of art galleries and possibly stop by the Irish Film Institute, the Project Arts Centre, the National Photographic Archive, and DESIGNyard.

The Icon Walk: “The Greatest Story Ever Strolled”

Walk through the lanes of Fleet Street and look through a series of snapshots of iconic Irish historical and contemporary figures. These creative representations of cultural icons, past and present, are posted on the walls of the streets leading up to the Icon Factory Gallery.

The public art installation showcases original artwork by many different local artists of Irish icons from many disciplines, including writers and playwrights, sports icons, musicians, and actors.

The Icon Walk leads to the Icon Factory where you can purchase some of the images displayed on t-shirts or posters.

Christ Church Cathedral in Dublin (also known as The Cathedral of the Holy Trinity) is the older of the city’s two medieval cathedrals. The church has also been a place of pilgrimage for almost 1,000 years. Christ Church Cathedral is located in the former heart of medieval Dublin, and it is the only one of the three cathedrals or acting cathedrals which can be seen clearly from the River Liffey. The church was built on the high ground overlooking the Viking settlement at Wood Quay.

In almost every major city around the world, there is a cultural landmark that has defined that city for generations. For Dublin, Ireland, that significant landmark is Trinity College. Founded in 1592 and modeled after the universities of Oxford and of Cambridge, Trinity College is one of the seven ancient universities of Britain and Ireland, as well as Ireland’s oldest university.

The Library of Trinity College is the largest research library in Ireland. It is a legal deposit library for the United Kingdom of Great Britain and Northern Ireland, which means that it is entitled to a copy of every book published in Great Britain and Ireland. It currently contains about five million books, including serials, manuscripts, maps, and printed music.

The Library consists of several buildings and was founded with the College. The first endowment to the Library came from James Ussher (1625–56), Archbishop of Armagh, who donated his own valuable library, which contained several thousand printed books and manuscripts. The Trinity College Library is considered to be one of Ireland’s most well-known tourist attractions, as it contains thousands of rare, and very early, volumes.

Game of Thrones Tours in Dublin

Dublin visitors can also enjoy customized tours of several filming locations of the famous HBO epic drama Game of Thrones. The tour stops include Tollymore Forest Park, Tyrion and Jon build a campfire on their journey to the Wall. You will also be able to visit Castle Ward Estate where nine Game of Thrones locations are available. The 16th century castle and stable yard are where the scenes at Winterfell were filmed. Nearby, you’ll find Strangford Lough, a 15th century Tower House that served as the location of Robb Stark’s camp in the Riverlands. Other scenes filmed nearby include the spot where Brienne of Tarth dispatched three Stark bannermen and the Battlefield of Baelor.

Visitors will also be able to see the 12th century Cistercian Abbey where Robb’s allies declare him as the ‘King in the North’.

The tour also provides many props, such as shields, swords, and helmets for visitors to put on and immerse themselves fully in the experience.

If you enjoy such trips and adventures, then also check out our articles on Temple Bar, St Stephen’s Green, and Christ Church Cathedral.