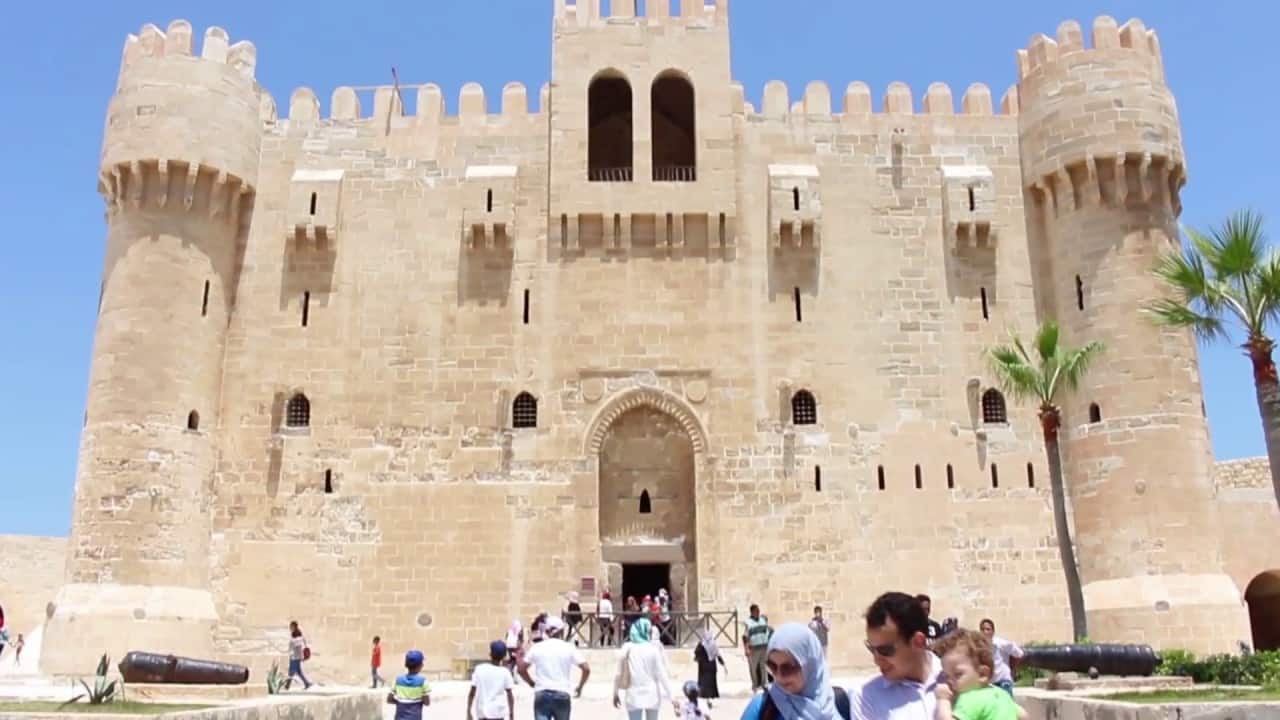 The Qaitbay Citadel is a defensive fortress built in the a 15th century and located directly located on the Mediterranean sea coast, in Alexandria, Egypt. It was established in 1477 CE by Sultan Al-Ashraf Sayf al-Din Qa’it Bay. The Citadel was originally situated on the eastern side of the northern tip of Pharos Island at the mouth of the Eastern Harbour. The Qaitbay Citadel in Alexandria was considered one of the most important defensive strongholds, not only in Egypt, but also along the Mediterranean Sea coast. It represented an important part of the fortification system of Alexandria in the 15th century CE.

History and Architecture of the Qaitbay Citadel

It was erected on the exact site of the famous Lighthouse of Alexandria, which was one of the Seven Wonders of the Ancient World and it was built on 17550 m2.  About 1480 CE, the Circassian Mamluk Sultan Al-Ashraf Qaitbay fortified the place as part of his coastal defensive edifices against the Turks, who were threatening Egypt at that time. He built the fortress and placed a mosque inside it. The Qaitbay Citadel continued to function during most of the Mamluk period, the Ottoman period and the Modern period, but after the British bombardment of the city of Alexandria in 1882, it was kept out of the spotlight. It was neglected until the 20th century, when it was restored several times by the Egyptian Supreme Council of Antiquities.

The Qaitbay Citadel was built as a defensive fortress shaped designed in a square shape with dimensions 150m x 130m, surrounded by the sea from three directions. The Citadel includes walls and the main tower at the North East side, the walls are divided into inner walls and outer walls. The inner walls included the soldiers barracks and the arms storage while the outer walls included defensive towers from the four directions. These towers are the same height as the walls except for the Eastern wall which includes defensive holes for the soldiers.

Founder of the Qaitbay Citadel

The founder of the Qaitbay Citadel is a Circassian Sultan named Al-Ashraf Abou Anasr Saif El-Din Qaitbay El-Jerkasy Al-Zahiry (1468–1496 AD) who was born about 1423 AD (826 AH). He was a Mamluke who had come to Egypt as a young man, less than 20 years old. Bought by Al-Ashraf Bersbay, he remained among his attendants until Al-Ashraf Bersbay died. Then the Sultan Djaqmaq bought Qaitbay, and later gave him his freedom, Qaitbay then went on to occupy various posts. He became the Chief of the Army during the rule of the Sultan Tamar Bugha. When the Sultan was dethroned, Qaitbay was appointed as a Sultan who was titled Almalek Al-Ashraf on Monday 26th Ragab, 872 AH (1468 AD). He was one of the most important and prominent Mamluk Sultans, ruling for about 29 years. He was a brave king, who tried to initiate a new era with the Ottomans by exchanging embassies and gifts.

Building of this fort started in the month of Rabi Alawal 882 AH. Sultan Qaitbay had travelled to Alexandria, accompanied with some other Mameluke princes, to visit the site of the old lighthouse and during this visit he ordered the building of the Qaitbay Citadel. In the month of Shaban 884 H, the Sultan Qaitbay travelled again to Alexandria when the construction was finished. He provided the fort with a brave legion of soldiers and various weapons. He also dedicated several waqfs from which he financed the construction works as well as the salaries of the soldiers. Throughout the Mamluk period, and due to its strategic location, the Qaitbay Citadel was well maintained by all the rulers who came after Qaitbay. It included a large prison made for the princes and the state-men whom the Sultan kept away from his favour for some reason.

Qaitbay Citadel Over the Years

After the Ottoman Turks had conquered Egypt, they cared for this unique Citadel. They kept it in good condition and stationed it with infantry, artillery, a company of drummers and trumpeters, masons and carpenters. As the Ottoman military became weak, the Qaitbay Citadel began to lose its military importance. In 1798 CE, during the French expedition of Egypt, it fell into the hands of the French troops, mainly because of the weakness of the Citadel garrison, and the power of the French modern weapons at that time.

When Muhammad Ali Pasha became the ruler of Egypt in 1805, he renovated the old Qaitbay Citadel, restoring and repairing its outer ramparts, and he provided the stronghold with the most modern weapons of the period. His reign was like another golden era for the citadel.

Orabi Revolt happened in 1882, and a large part of Alexandria city was damaged by the British bombardment, especially the site of the citadel. The facades in the north and the west were totally destroyed and the citadel was neglected until 1904 when the Ministry of Defense restored the Upper floors. King Farouk wanted to turn the citadel into a palace in 1904, but the Egyptian Navy turned it into a Maritime Museum. The biggest restoration work dates to 1984, when the Egyptian Antiquities Organization made plans to restore the fort.

The National Navy Museum located inside the citadel contains artifacts from the Roman and Napoleonic sea battles. It combines models , paintings and statues portraying the development of navigation and ship building in Egypt since Pharaonic times until the present. They also represent the Egyptian naval battles throughout the ages.

The museum was built in 1930, and it is considered a relatively small museum , and it contains various kinds of fish and sea animals from both the Mediterranean and Red seas, along with some other kinds of fish that live in freshwater like the Nile and the Amazon.

The museum houses a maritime research centre and is placed next to the National Institution for Maritime Science located in the Qaitbay Citadel plaza. It also has many laboratories, aquariums and many plants from seas and rivers, and it is considered a part of the Maritime Science Institution as it contains many rare fish and sea creatures. In the attached research centre, many research on the creatures from the Egyptian lakes are conducted to try and save the sea life.

A small museum is attached to the main museum, it contains models om embalmed sea creatures that live in the Mediterranean and Red sea and also the Amazon. It also contains a whale’s skeleton in addition to a mermaid model.

Controversy around the Qaitbay Citadel

A ceremony has raised a controversy around the citadel since a wedding party has taken place with the blessing of the Islamic Monuments Department and the supervision of the Tourism Police Department. Activists are enraged because of this, saying that we can propagate through organizing cultural and intellectual events rather than that misuse. They have even suggested using the outside of the citadel for commercial purposes.

A more recent controversy is the auction declared to transform the Citadel Marina into a luxurious café and restaurant. A gesture that raised a rage from the public since this was the only free place for the less fortunate to enjoy a summer breeze or go for a walk in holidays.

Qaitbay Marina is the most famous and recognizable marina in Alexandria and probably in Egypt. It bears the memories of the hot sunny days of summer and the rainy days of winter for most Alexandrians.

The famous marina is surrounded with rocks the embrace the waters of the Mediterranean sea to which the famous citadel faces. These rocks bear the names of lovers an students on school trips for more than a decade. Along the marina, there are chairs put there for people coming to the citadel to sit and enjoy the sea view , and maybe drink something cool and all this is for free.

Yet, recently, the Central Department of Tourism in Alexandria has declared that the ancient marina will be opened for auction to be developed into a café and restaurant. The area to be opened for auction will start at the gate of the exterior plaza of the Citadel to the end of the Marina. This is said to help encouraging tourism in the city of Alexandria and reducing the amount of street vendors and crime in the area.

Citadel of Qaitbay in Movies

Qaitbay Citadel is a sight to behold and was a perfect movie set for a great action movie about the Crusades. The Crusades as told by iconic Egyptian director Youssef Chahine and great Egyptian writers Youssef Al-Sebai and Abd Al-Rahman Al-Sharkawy in the iconic historical movie El Naser Salah El-Din (1963), Saladin the Victorious was also ranked among the top 100 films in the history of Egyptian cinema. When Muslim pilgrims are slaughtered by Christians in the holy lands, Saladin (Ahmed Mazhar) succeeds in taking back Jerusalem under the leadership of Richard the Lionheart of England. The film was shown at Moscow International Film Festival in 1963. The movie had one blunder: among its various battle scenes are the attack of Richard’s fleet and the Siege of Acre which Chahine shot near the Citadel of Qaitbay. However, history tells us that the Siege of Acre took place between 1189 and 1191 while the Citadel of Qaitbay was constructed in 1477.

The best thing about Qaitbay Citadel of Alexandria is that you will enjoy the idea of seeing the actual real place from where the archers stood in the old days in order to defend Alexandria. The structure of the whole place is actually what will take the breath away; you will have to pay attention to the inside as well as the ceiling of the whole area.