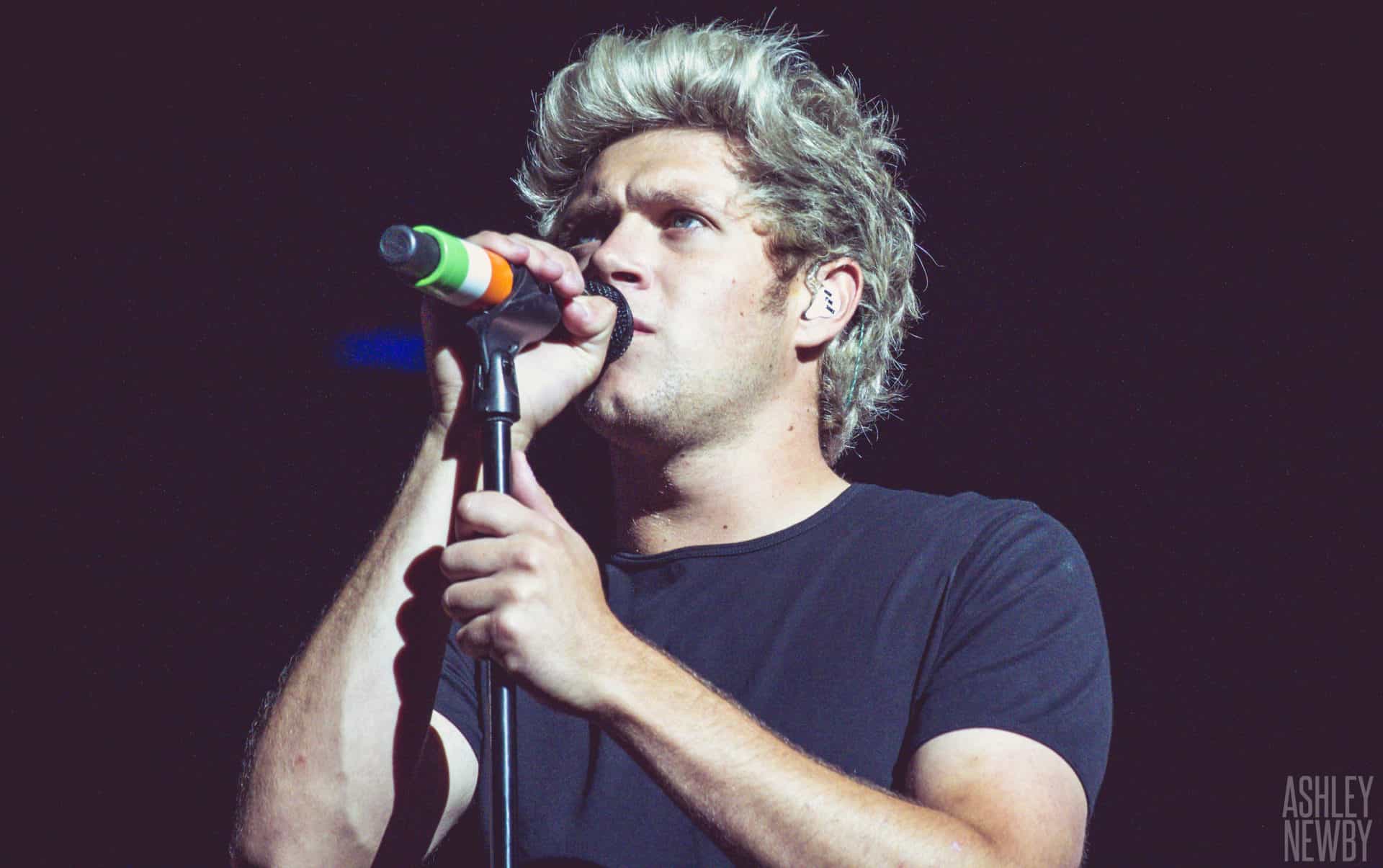 Irish singer and songwriter Niall Horan was born on the 13th of September 1993 in Mullingar, Ireland. He became a popular singer as a member of the band One Direction. In 2010, he participated as a solo singer in the British singing competition The X Factor. He was eliminated from the solo competition and he was put together with Liam Payne, Louis Tomlinson, Zayn Malik, and Harry Styles in one band and they released five albums together and went on many tours around the world.

Niall signed a recording deal in 2016 as a solo singer for his album Flickers and his songs This Town and Slow Hands reached the top 20 in several countries. The album was number one in Ireland and the United States and he also started on the Flicker Sessions tour (2017) and the Flicker World Tour (2018) to support the album.

Niall’s parents are Bobby Horan and Maura Gallagher, they got divorced when he was five years old. He has a brother called Greg, and they lived with their mother but after one year the decided to move to live with their father. He went to St. Kenny’s National School, a primary school, and Coláiste Mhuire, a Catholic boys school, which are both located in Mullingar his home town.

In 2010,  when Horan was 16 years old he attended the auditions for the seventh season of the famous television reality show The X Factor in Dublin. He sang So Sick for Ne-Yo but he didn’t impress the judges Cheryl Cole and Katy Perry but Simon Cowell was really impressed. He was among the few contestants of that season who were chosen for the X Factor Bootcamp to polish their skills. Celebrity singer, Nicole Scherzinger, who was one of the guest judges of the reality show, suggested that Niall Horan team up with four other fellow contestants and form a band of their own.

After that, Niall Horan teamed up with Zayn Malik, Harry Styles, Louis Tomlinson, and Liam Payne to form the band One Direction. They started their journey in The X Factor by performing covers of several popular songs, such as Kelly Clarkson’s My Life Would Suck Without You and singer Bonnie Tyler’s composition Total Eclipse Of The Heart. Unfortunately, the band didn’t win in the final round in the show they finished in 3rd place, behind runner-up Rebecca Ferguson and winner Matt Cardle, but after that, they received a contract with Cowell’s label Syco and recorded its first album, Up All Night, which became a best seller in the United Kingdom in 2011 and the United States in 2012. The band and other contestants from The X Factor started a live tour and the group performed for 500,000 people throughout the UK.

One Direction’s first song was “What Makes You Beautiful”, was released in September 2011, the song reached number one in several countries following other singles, “Gotta Be You”, “One Thing”, and “More than This” had moderate success and the first two songs became top ten hits in the UK. The group’s debut album “Up All Night” was released in Ireland and the UK, reaching number one and number two on the charts. The album was released internationally in March 2012, and One Direction became the first UK group to have their debut album reach number one in the United States.

Their first tour was really successful and to promote the album, they went on their first headlining concert tour the Up All Night Tour, tickets sold out in minutes, and the tour was met with positive reviews from critics who praised their singing abilities and stage presence. In 2012, a book by the name Dare to Dream: Life as One Direction was released in America and got published and topped The New York Times Best Seller list. In November, the same year, they released their second album called Take Me Home It reached number one in over 35 countries, and, after reaching number one on the Billboard 200, the group became the first boy band in US chart history to record two number-one albums in the same year alongside becoming the first group since 2008 to record two number-one albums in the same year. In 2013, a film called One Direction: This Is Us a documentary film was released in the box office and was successful gaining 69 million dollars talking about the English-Irish boy band One Direction.

At the end of 2013, the band released their third album Midnight Memories, It was the best selling album worldwide in 2013 with 4 million copies sold worldwide “Best Song Ever”, the album’s lead single, is One Direction’s highest-charting single in the United States to date. They also made a tour for the album and it was the first all stadium tour and tickets were sold out really quickly. The tour gained over $290 million and was the highest-grossing tour of 2014, the 15th highest-grossing concert tour of all time, and is still the highest-grossing tour of all time by a vocal group. In 2014, One Direction released their fourth album, Four. The last album to include Zayn Malik, singles “Steal My Girl” and “Night Changes” both received platinum status. The album was number one in 18 countries and One Direction became the only group in the 58-year history of the Billboard 200 albums chart to have their first four albums debut at number one. In 2015, they released their fifth album called Made in the A.M., the album reached number one in multiple countries, including the UK, while it reached number two on the US Billboard 200.

Solo career after One Direction:

After the break-up of One Direction, Horan had signed a solo deal with Capitol Records. He released his debut solo single “This Town”, and after it was released, it peaked at number 9 on the UK Singles Chart and number 20 on the US Billboard Hot 100 and in 2017, Horan released his second solo single “Slow Hands”. It also entered the top 10 in the United Kingdom and the top 20 in the United States.

On the 20th of October, his album “Flicker” was released and debuted atop the Billboard 200. It also reached number one in Ireland and the Netherlands.  In 2018, he embarked on the Flicker World Tour to promote the album. Horan started that he was working on his second album in September 2019, the album’s lead single, “Nice to Meet Ya”, was released on 4 October 2019, and he said that he would be embarking on the Nice to Meet Ya Tour in 2020.

Niall was recognized for his talent with many awards, including:

In 2016, One Direction won the Pop Award Songs for their song Night Changes in the BMI London Awards. 2017 and 2018 were great years for Niall Horan as far as winning awards, as in 2017 they won the Favorite Breakout Artist Award in the People’s Choice Awards, also in the Radio Disney Music Awards, he won the Best Male Artist. In the iHeartRadio Much Music Video Awards they won the Fan Fave International Artist or Group, he also won the Teen Choice Award for Choice Song: Male Artist for his song Slow Hands and was nominated in the same festival for Choice Summer Male Artist. In the same year in the BMI London Awards, he won the Pop Award Songs for his song This Town, and in the American Music Awards, he won the New Artist of the Year Award.

In 2019, in the BMI London Awards, he won the Pop Award Songs for his two songs On the Loose and Too Much to Ask.

More than a Singer:

In 2016, Horan faced a major shift in careers when he founded a company called Modest Golf, a golf management company, and signed several golf players. After three years in 2019, the company earned its first European tour win when Italian golfer Guido Migliozzi, the first golfer that the company signed back in August 2016, won the Kenyan Open.

Niall Horan was not just satisfied with focusing on a singing career, he always sought to use his fame for good. He was involved in the Action 1D campaign that “aims to end extreme poverty, tackle inequality and slow down climate change with the help of their millions of fans”. The band also supported Comic Relief, a British charity, founded in 1985 by the British comedy scriptwriter Richard Curtis and comedian Lenny Henry in response to the famine in Ethiopia.

In May 2014, Horan worked to raise money for Irish Autism Action by hosting the Charity Football Challenge at Leicester City’s King Power Stadium. The celebrity football match drew in around 10,000 spectators and raised about £300,000 for the charity. In 2016, Horan still continued creating limited-edition T-shirts to support Irish Autism Action.

Supporting the troops, Horan worked with Golf Digest to raise money for the REACH military families. Not only that, but he also supported cancer patients by collaborating with golf player Justin Rose and creating the “Horan and Rose Gala” charity event in aid of Cancer Research UK Kids and Teens. Horan also worked with UNICEF by joining the Soccer Aid 2016 star lineup fundraiser as an assistant manager and player for the Rest of the World team.

In 2017, his philanthropy was recognized when he received an Arnie Award for his work with charities.

There’s no doubt that Niall Horan is one of the most influential young people around the world, first through his music, even after leaving One Direction, and now through his amazing charity work that helps children worldwide. He is a great example that fame does not mean that you lose connection with what is important around you.

The Amazing Cillian Murphy: By Order of the Peaky Blinders