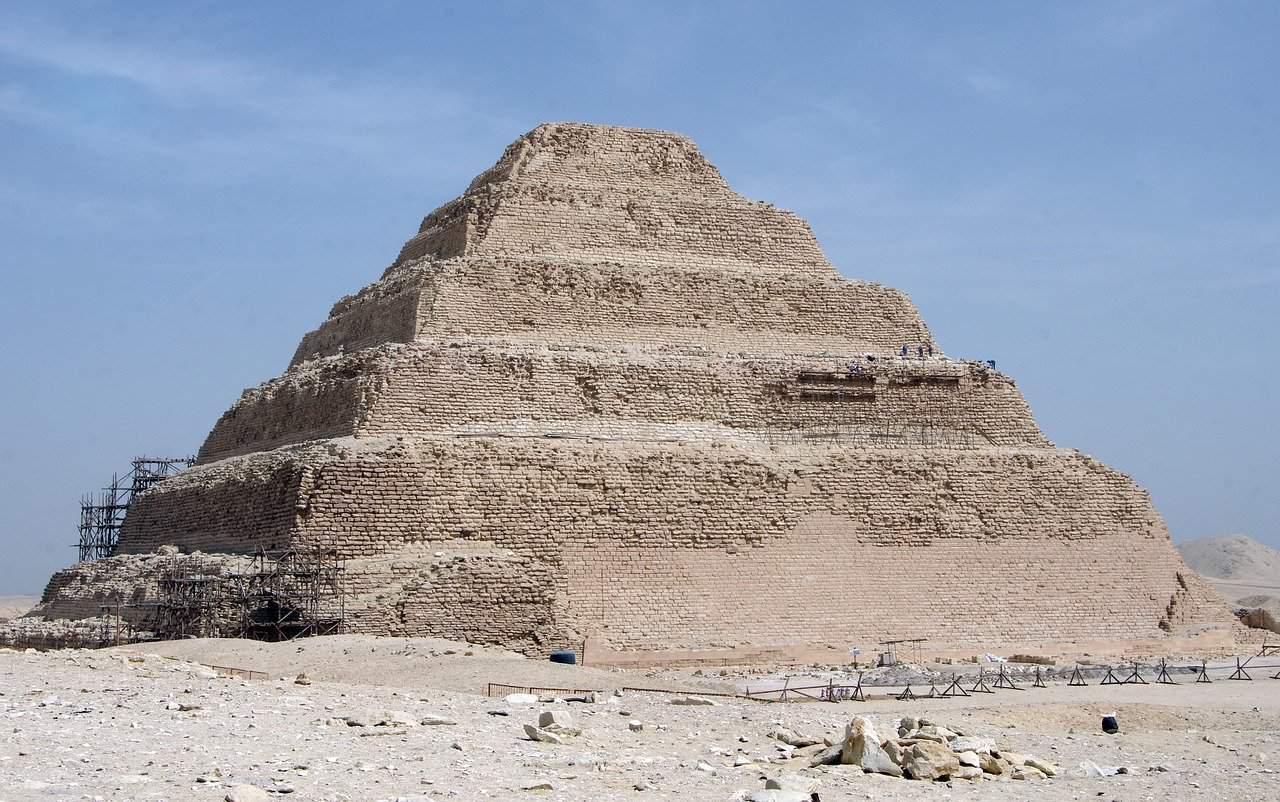 Located south of modern Cairo, the Step Pyramid of Saqqara lies on the west bank of the Nile River, and is over 6 km long and more than 1.5 km wide. The Pyramid, named after Djoser, first king of the 3rd Dynasty, is the last of what remains of the Saqqara Necropolis; a quite large system of cemeteries that spanned the modern sites of Dahshur, Giza, and Abusir.

Originally built in during the reign of the 1st Dynasty, the area continued to be used for burial for over 3000 years. Since the possibilities of excavating new antiquities in Egypt is endless, the remains of a temple dedicated to the goddess Bastet are buried below what is now a parking lot on the top of the Bubastieion cliffs.

Djoser’s mortuary temple was built on the northern side of the pyramid where daily rituals for the dead were performed, and offerings were presented to the pharaoh in the afterlife. The mortuary temple essentially faced north as it was believed that the pharaoh would become one of the eternal stars in his afterlife.

An Influential King Way Ahead of His Time

Djoser was the son of king Khasekhemwy and queen Nimaathap, however, there is still much debate on whether he was the first of second king in his line of succession.

Djoser’s wife was Hetephernebti. Defying the tradition of choosing a queen and several lesser wives, he chose to remain faithful to only one woman, Hetephernebti.

A painted limestone statue of Djoser, which was found within at the Djoser Pyramid during the excavations carried out in 1924–1925, can now be found at the Egyptian Museum in Cairo. It is the oldest known life-sized Egyptian statue.

The length of Djoser’s reign has also been a matter of much debate. Due to the existence of many substantial building projects, particularly at Saqqara, some scholars argue Djoser must have ruled for at least three decades.

Historian Margaret Bunson notes that Djoser “ruled during an age witnessing advances in civilization on the Nile such as the construction of architectural monuments, agricultural developments, trade, and the rise of the cities”.

During his reign, Djoser dispatched several military expeditions to the Sinai Peninsula to subdue the locals. He also sent expeditions there to mine for valuable minerals such as turquoise and copper.

Djoser’s pyramid set a precedent for later construction work in the era. These forms would eventually lead to the standard pyramid tomb in the later Old Kingdom. Furthermore, it ended the custom of burying pharoahs in Abydos, instead they chose burial grounds in the North, following Djoser’s lead.

Djoser was also the first pharaoh to reside exclusively at Memphis, thereby helping to make it the political and cultural center of the Old Kingdom of Egypt.

Egypt witnessed political stability during his reign as he was successful in securing and then extending the country’s borders.

The Step Pyramid of Djoser

The Step Pyramid of Saqqara (Djoser) was definitely ahead of its time. Historian Mar Van de Mieroop concludes that “Earlier complexes at Abydos and at Saqqara near Memphis had been massive but they were of mud brick. A few elements only were of stone. Djoser’s Step Pyramid complex at Saqqara was the earliest construction of its size in world history fully made of stone…Imhotep reproduced in stone what had been previously built of other materials.

The facade of the enclosure wall had the same niches as the tombs of mud brick, the columns resembled bundles of reed and papyrus, and stone cyliners at the lintels of doorways represented rolled-up reed screens. Much experimentation was involved, which is especially clear in the construction of the pyramid in the center of the complex. It had several plans with mastaba forms before it became the first Step Pyramid in history, piling six mastaba-like levels on top of one another…The weight of the enormous mass was a challenge to the builders, who placed the stones at an inward incline in order to prevent the monument breaking up”.

The museum features a documentary film produced by National Geographic. Imhotep was Djoser’s chancellor, the high priest of the sun god Ra at Heliopolis, and the person responsible for the design and construction of the pyramid dedicated to his monarch.

The pyramid of Djoser is considered to be a revolutionary design since before then pharaohs were buried in rectangular mastabas. However, Imhotep created a pyramid by stacking six mastabas on top of each other. This design would later evolve into the smooth-sided pyramids seen at Giza and elsewhere.

The site was even considered an attraction in ancient times, as evidenced by ancient graffiti, people came here as tourists and pilgrims from as early as the Middle Kingdom (2040-1640 BC), if not earlier.

Imnhotep was so revered that two thousand years after his death his status had risen to the god of medicine and healing.

Not only was Imhotep skilled in the field of architecture, he was also known as a polymath, poet, judge, magician, scribe, astronomer, and physician.

According to Egyptologist James Peter Allen “The Greeks equated him with their own god of medicine, Asklepios, although ironically there is no evidence that Imhotep himself was a physician.”

The Famine Stele is an inscription that dates back to the Ptolemaic Dynasty, which tells the story of how a king saved his country. According to the inscriptions on the stele, a famine broke out in Egypt for seven years.

No one could figure out a solution to the disaster until Djoser had a dream in which the god Khnum, god of the source of the Nile River, came to him and complained that his temple on the island of Elephantine had been left in ruins and disrepair and people had lost their respect for the god who had given them life through the river Nile.

Djoser consulted with his counselor, Imhotep, and they both decided that Djoser should sail to the island of Elephantine to pay his respects to Khnum and oversee the plans to repair the temple. Djoser eventually ordered a new temple to be erected in its place. Once the construction of the new temple was completed, the famine ended and Djoser was hailed as a hero by his people.

Although the Stele is largely regarded as a legend not based on real events, it still attests to Djoser’s popularity among his people and how he was very well remembered thousands of years afterward.

The chambers of the tomb were dug to form a maze of tunnels in order to discourage robbers and protect the body and grave goods. Djoser’s burial chamber was carved of granite and, to reach it, one had to navigate the corridors which were filled with thousands of stone vessels inscribed with the names of earlier kings.

Although the opening to the tomb was sealed with a 3.5 ton block after Djoser’s burial and despite the extreme care taken during the design and construction of the pyramid to ensure the safety of the pharaoh’s body, it was still extensively robbed and nobody was found inside, suggesting that the thieves had found the pharaoh’s body and stolen it as well.

Cairo does not only contain the grand Pyramids of Giza, there are many more exciting attractions and landmarks to explore, such as this beautiful and equally fascinating pyramid that carries a lot of history and myth that has attracted visitors, researchers, tourists and Egyptologists over the years. You won’t want to miss stopping at Djoser Pyramid in Saqqara on your trip around Cairo, Egypt.

Claddagh Ring: The Essence of Loyalty and Faithfulness